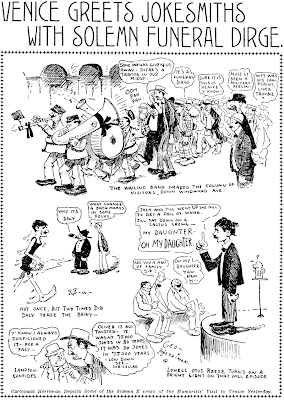 Friday, September 20 1907 -- The newspaper humorists converged on Venice for a get-together, and Herriman pens a cartoon filled with in-jokes. If they were explained, it was in the accompanying article that didn't make it onto my copy. 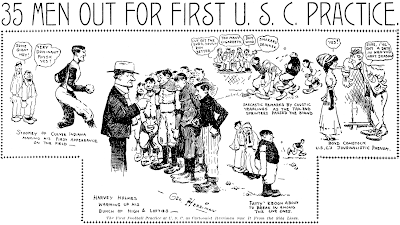 Friday, September 20 1907 -- football tryouts open at the University of Southern California, coach Harvey Holmes presiding. Only 35 candidates turned out looking for a spot on the team, of which 21 would be picked for the roster. Candidate Byron "Bull" Stookey was the subject of much comment because of his towering height -- "almost" 6' 5" -- quite the giant in those days.

Obscurity of the Day: Meehan Streak

Here we have a recent obscurity, a delightful gag feature titled Meehan Streak by Kieran Meehan. Meehan is Scottish and made a name for himself over there in the 1980s and 90s with various features. In the 90s he invaded the colonies by contributing to King Features' 'edgy' panel cartoon series The New Breed. King Features editor Jay Kennedy was impressed with Meehan's work and encouraged him to come up with his own feature. The result was Meehan Streak, a daily and Sunday gag strip with no continuing characters.

Ultimately Kennedy ended up not taking the feature, and Meehan shopped it around. Meehan Streak ended up with a syndication contract at the Los Angeles Times Syndicate. The feature debuted sometime in 1999 (sorry, I have no exact start date) and ran until March 27 2005. Syndication moved to Tribune Media Services when the Trib and Times combined ownership in 2001.

Although the strip was, in my opinion, a definite cut above the average, it suffered the almost inescapable fate of features that don't have a continuing cast of characters. As much as readers might have enjoyed the strip, there was no hook that would make them storm the battlements at a newspaper if it was dropped. Newspaper editors, therefore, tended to think of it as a disposable feature. When a syndicate salesman plopped the next 'instant classic' on the editor's desk, Meehan Streak was a prime target for cancellation.

When Meehan Streak ended its run in 2005, Meehan bounced right back with a new feature titled A Lawyer, a Doctor and a Cop, this time for King. The feature is still in syndication but isn't taking the world by storm. The title was changed to Pros & Cons in 2008, but that doesn't seem to have led to any big jump in popularity. Donning my syndication guru turban again, I say the problem is the same -- lack of memorable characters.

Comments:
Pros & Cons is one of my favorite strips.

I remember this strip. Toward the end he turned it into a strip about cavemen and changed the name to Tribal Meehan Streak. Didn't seem to improve the client list, alas.

Meehan Streak is one of my all-time favorites. Was quite disappointed to see it end.

The Chicago Tribune carried Meehan Streak as a replacement strip when a comic strip goes into reruns for a week or two or month in 2002-2003. Then the strip ran regularly from March 2004 (replacing the Hots) to August 2004 when it was replaced by Brewster Rockit: Space Guy.

Originally from 1999 to 2003 it was focused for about 12 several plots/characters/scerios (including pirates, boxers, a pyscatrist,ancient Romans, and cavepeople), but from January 2004 until the end of the strip run in March 2005 it only focused on the cavepeople with rumors to rename the strip under the title of either Tribal or Tribal Meehan Streak as a last ditch effort for the strip, but I think failed to catch on.

Obscurity of the Day: The New Zoology 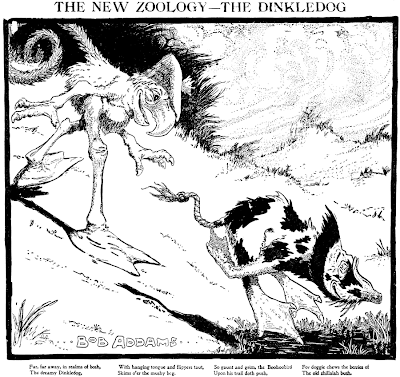 Bob Addams specialized in animals, sometimes of the barnyard variety, sometimes, as in The New Zoology, the fantastical variety. Addams was a fixture at Life magazine, but also occasionally did a short run newspaper feature. The New Zoology was done for the Philadelphia North American and ran just three times in their Sunday section, March 16 to March 30 1902.

Although Bob Addams was a excellent and prolific cartoonist, I was surprised to find that there is no biographical information about him in the whole pile of the reference books I checked.

Comments:
He was born in Woodbury, New Jersey in 1874, the son of Wellington and Sarah (Neff) Addams. His full name was Robert Neff Addams. He grew up in Germantown, Pennsylvania. By 1919, he was living aboard a boat in Miami, where he was employed as a cartoonist. His WWI draft registration gives his wife's name as Anna King Addams. I couldn't read his employer's name well, but it seems it was a federal agency in Washington DC. There is a photograph with his passport application for 1919 on Ancestry.com. That's where my trail ends so far. See: http://www.pa-roots.com/berks/books/montgomery/a02.html 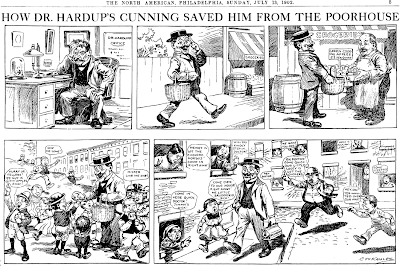 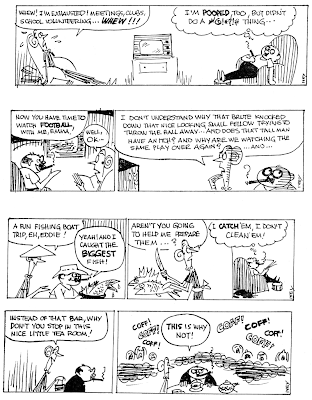 Comments:
Sir,
Have a cigar for me buddy. I respect your skills as a cartoonist and your wisdom as a tobacco connoisseur. I am now following you on Blogger. I appreciate your constructive criticism on my productions as well.

Sir, Thanks for the cigars.