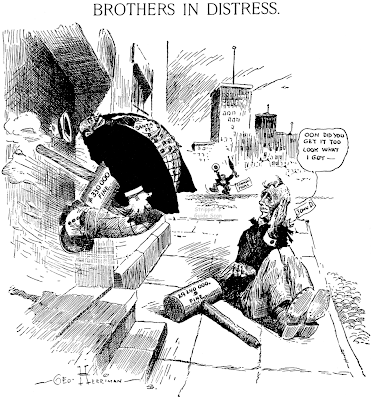 Monday, November 11 1907 -- The Santa Fe Railroad is fined $330,000 for giving "rebates" (aka kickbacks) to an Arizona cement company. This was a widespread monopolistic practice that also earned John D. Rockefeller's Standard Oil Company a $29 million fine, the largest by far ever levied up to that time. See the New York Times archive for a contemporary news account. 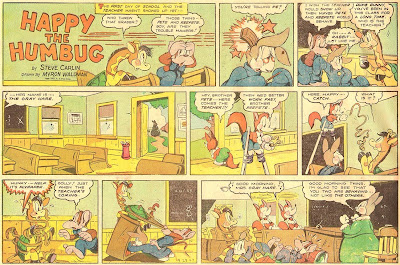 I used to sit on the floor at the age of 4 (1959) and listen to this RCA 78rpm record about Happy The Humbug Gets His Birthday. It was a 2-record set with side 1 & 4 on 1 record, and dide 2 & 3 on the other. I didn't have the other record so all I could listen to was the beginning and the end. I remember he went before the wise old elephant to say he wanted a birthday. The elephant said he would grant him his wish if Happy would bring him the "horns of a dilema". Happy was discouraged and said "how will I ever find the horns of a dilema?"
In the end, Happy delivered the horns of a dilemma and was granted his birthday. But because I never heard sides 3 & 4, I never found out how he did it.

Obscurity of the Day: Weary Willie 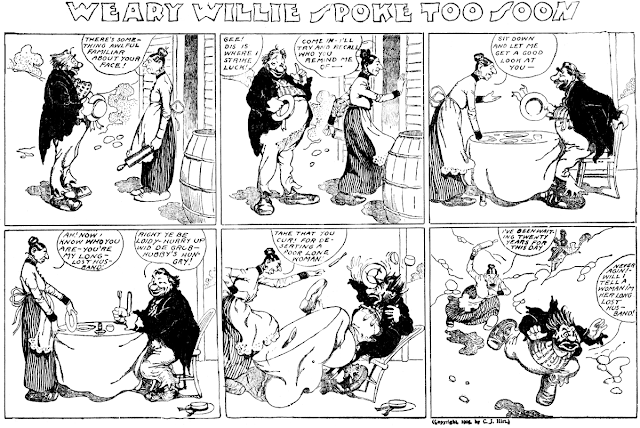 Hobo strips were quite popular back in the early days of newspaper comic strips. The versatile concept allowed cartoonists to change their venue for each strip, and the hobo's constant search for a handout and his escapades with the 'bulls' made for gags that practically wrote themselves.

Later on the conception of the hobo was softened and we got weak sister versions like Pete the Tramp, Benny, and Frank and Ernest. These hobos were cast more in the light of knights of the open road, or even simply park bench philosophers. My guess is that the last true hobo strip might have been Slim Jim, who managed to hang on into the 1930s through the auspices of World Color Printing.Can anyone think of a later one?

Weary Willie, by the wonderful Ed Carey, was a cookie-cutter hobo strip, and didn't last long in the C.J. Hirt version of the McClure Syndicate Sunday funnies section. It ran from May 7 to November 26 1905.

Tip of the tomato can to Cole Johnson for the sample!

Comments:
He looks alot like Carey's other hobo star Brainy Bowers, which was before and after this.

Obscurity of the Day: Oh, There Goes My Car

Here's a rarity from the Los Angeles Examiner. A.C. Fera made a quick stop at that paper in 1909. I recall that he also worked for a much longer stint at another L.A. paper, but I can't seem to find that information at the moment. Looking through the standard references I find essentially no biographical information on Fera at all.

Fera later had good success with his syndicated Sunday strip Just Boy, but back in the oughts he was just another local cartoonist in southern California. During his time at the Examiner he created two weekday strips; we've already discussed What You Lafin' At?, and here's the other, Oh, There Goes My Car. The title puts me in mind of a slapstick strip about runaway autos, but it turns out that the cars referred to are trolley cars. The gag is that some poor shlub in need finds a real 'hail fellow well met' buddy who is delighted to see him until comes the time for asking a favor. Then the jovial buddy takes it on the lam, yelling that he must catch a trolley.

The strip ran on just a handful of occasions from October 30 to November 24 1909.

Comments:
Congratulations! You've been nominated for the highly sought after and highly coveted "Kreativ Blogger" award! Read all about it at http://jeffoverturf.blogspot.com/2010/05/much-sought-after-and-highly-coveted.html

Adolph Christian Fera was born on September 14, 1877 according to his World War I draft card. In the 1880 U.S. Federal Census, he was the oldest of two sons born, both in Illinois, to Charles and Mamie. The family lived in Danville, Illinois.

The beginnings of Fera's cartooning education and career is not known. In the book, "Artists in California 1786-1940," the author, Edan Hughes, wrote:

Fera settled in Los Angeles in 1909. For many years he worked
there as a cartoonist for the Hearst papers.

The 1910 census has Fera living in South Pasadena with his father and aunt. Fera's occupation was cartoonist at a newspaper. That same year a collection of his cartoons was published under the title, "Post Cards of a Tourist (Mr. 'Skinny' East): Cartoons of Southern California". Below is a description from "Art Books, 1876-1949."

Fera married in the mid-teens and started a family. He registered for the draft on September 12, 1918. On the draft card it said he was living in Los Angeles as a cartoonist, working for the Newspaper Feature Service in New York.

In the 1920 census, he was married to Mabel, had two sons, Gilman and Donald, and lived in Los Angeles on Western Avenue. In 1930 the Feras were still in Los Angeles, where they resided on South New Hampshire Avenue. He continued cartooning for a newspaper.

Fera died on June 15, 1941 in Los Angeles, according to the California Death Index.

I really like these old cartoons you unearth. They brighten my days. 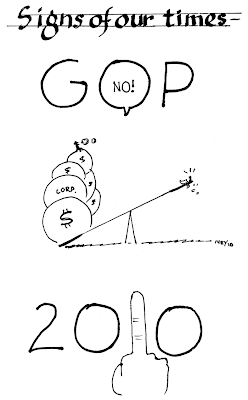