Obscurity of the Day: Alpha, Omega and their Sister Sue 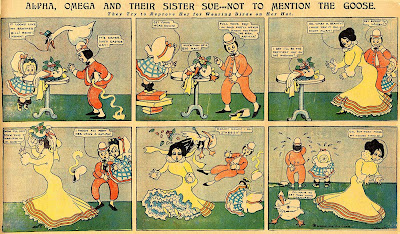 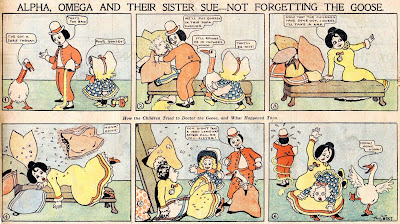 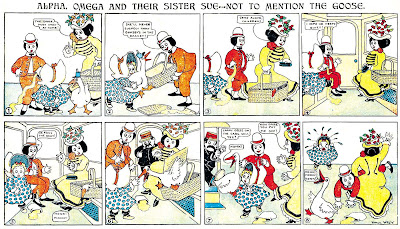 If I was that goose, I'd go on strike. Obviously the star of the show in Alpha, Omega and their Sister Sue, he gets bottom billing! What's up with that?

Alpha, Omega and their Sister Sue was contributed by Paul West to the New York World Sunday section for just a handful of episodes, from March 9 to 30 1902 (the examples above lack only the premier episode). In the past I've described West's art as repellant. I wonder if someone back then made the same comment to him, because in this strip he's really done an excellent job of toning down the frightful Halloween-mask faces I so associate with him -- the artwork here is actually quite charming.

We just covered the quasi-official Sunbonnet Sue strip recently, and oddly enough, here she pops up again, though by a cartoonist not normally associated with her. West doesn't seem to have been fully on board with the philosophy of not showing her face, though.

Comments:
What's with that bag of ... sand? he keeps carrying around?

I assume it's goose feed, but I hadn't noticed how pervasive it was in these strips until you pointed it out!

Paul West was born in Boston, Massachusetts on January 26, 1871, according to his passport application. In the 1880 U.S. Federal Census he was the oldest of four children born to Paul, a lawyer, and Fannie; his middle initial was C. They lived in Boston at 778 Broadway.

In 1900, West was married to Jennie, since 1895. With two children, they lived in Yonkers, New York at 41 Caryl Avenue. He gave his occupation as newspaper.

His Cap Found on a Paris Bridge–Message Hints of Suicide.

Paris, Oct. 25.–Paul West, a New York writer, who came to France as a
Red Cross worker, has disappeared. His cap was found on a Paris bridge.
With it were two cards. One was addressed to Captain R.T. Townsend,
and on the other was written in French:

"When this is found I shall be dead."

West's health has been bad, and he was to have sailed for America this
week.

Paul West, well-known as journalist, playwright, and author, was born in
Boston, Mass., Jan. 26, 1871, and was graduated from the Peekskill
Military Academy, Peekskill, N.Y., in 1888. In July, 1895, he was married
to Miss Jane V. Carrigan of Cambridge, Mass., and she and a daughter
and a son survive, the latter being a member of the crew of a yacht
engaged in submarine patrol in European waters. The family formerly lived
at 817 West End Avenue, but Mr. West sublet his apartment before he left
for Europe last Summer and Mrs. West and daughter are said to be living
at East FIftieth Street.

Mr. West was engaged on Boston newspapers for several years, and
came to New York as a member of the editorial staff of The New York
Sunday World in 1898, remaining in this position until 1911.

Mr. West was the writer of "The Man From China," "The Pearl and the
Pumpkin," "The Love Waltz," "At the Waldorf," "Birdland," "The
Twentieth Century," "The Song Shop," "The Red Petticoat," and other
musical comedies, besides adapting and collaborating on many others.
He was also the writer of more than 300 published songs, and more than
100 motion pictures plays, including "War," "Crooky," (for Frank Daniels.)
"The Victim," and "The Wrong Girl." His books included "Short Letters of
a Small Boy," "The Innocent Murderers," (collaborating with William
Johnson.) "The Widow Wise," "Bill," "In Our School," and "Dime Novels
of an Office Boy."

On October 30, the New York Times published this follow-up article:

Discovered in Seine in Paris, Near Where He Left Note

Paris, Oct. 29.–The body of Paul West of New York, who came to France
to work for the American Red Cross and who disappeared last week, was
found yesterday in the River Seine. The Paris edition of The New York
Herald says the body was found close to the bridge where he left his cap
with a note, and which was found after his disappearance. The body had
lodged beneath a barge, and was fully dressed in the Red Cross uniform
and overcoat.

The Reno Evenving Gazette published this follow-up article on January 15, 1919:

Paris, Jan. 15.–American newspapermen went to the American Red
Cross cemetery this afternoon and placed a wreath on the grave of Paul
West, well known New York writer and Red Cross worker. The flower
covered grave was photographed and copies will be sent to his late
home.

Paul West died in Paris after his return from the Western front where
he had engaged in war work and at one time narrowly escaped death
when a shell from a big German gun exploded near him. He suffered
from shell shock as a result.

At one point Paul West ran the World comic art department, according to Herriman. I can't find much else on him besides what is posted here.