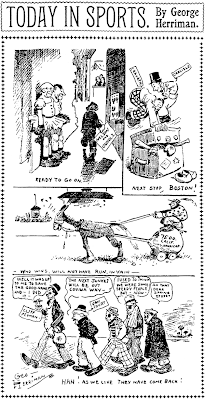 February 1, 1908 -- J.C. Stubbs, one of the stooges of the Southern Pacific railway system, and well-known as the father of rebating in California (rebating was an unfair practice aimed at bullying and soaking businesses who need railroad freight services), denies all to reporters when he visits L.A. Southern Pacific and Union Pacific are not in cahoots, no unfair rebating is done -- all is sweetness and light on the west coast. Note to Tea Partiers: this is the sort of behavior we get when business are allowed to run amok with no government oversight. Is this really what you want?

In Today in Sports, Herriman bids goodbye to Gavvy Cravath and Walter Carlisle, who were picked up by the Red Sox at the end of the PCL season. Cravath would go on to an impressive major league career, Carlisle on the other hand only made a handful of appearances with the Sox in 1908.

Cliff Peuman, a local boxer of little note, is also featured, as are Battling Nelson and Rudy Unholz, about to meet in the ring on the 4th of this month. 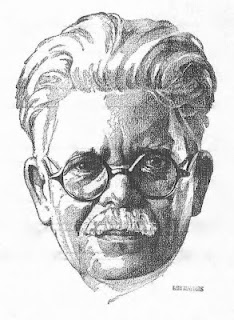 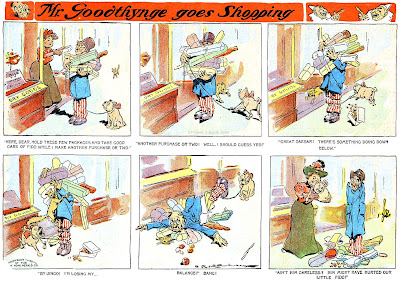 George Hopf was born in New York City in September 1880 according to an obituary and the 1900 U.S. Federal Census. Researching his older sister, Nellie, I found their parents, Christ and Sophia, in the 1880 census; Nellie was born in December 1877 and lived on Ninth Avenue in Manhattan.

In the 1900 census, Hopf and his sister lived with an aunt, Johanna Reiff, and her family in Manhattan at 339 East 80th Street. It is not known what happened to Hopf's parents. Nellie's occupation was listed as artist while her brother's line was blank. She may have been an artist, but it might have been a census enumerator's entry error. According to the 1910 census, she married around 1901 to John Merklein and moved to North Dakota. During this decade Hopf found work at the New York World where he produced strips such as Reddy the Rooter and Opportunity, which were found at Chronicling America.

Hopf was married and lived at 1050 Amsterdam Avenue as recorded in the 1910 census. His wife, Dorothy, had been married to him for a year. His occupation was artist in a studio. In the Catalog of Copyright Entries, Part 4, Works of Art, etc., 1914, New Series, Volume 9, Number 3, on page 299, there is a "Geo. C. Hopf" who did seven nursery rhyme drawings (e.g. Old King Cole, Little Miss Muffet) plus three others, used on lantern slides, for the Armstrong Cork Company of Lancaster, Pennsylvania.

Hopf has not been found in the 1920 census. In 1930, he was divorced and a cartoonist who lived 341 Lexington Avenue. Some time later he remarried. His panel, Animalgrams, appeared in the late-1930s (Allan's note: I cannot vouch for the existence of this feature).

George Hopf, nationally known cartoonist of New York, who lived during the summers at his home in Woodstock, died Monday afternoon. Funeral will be held tonight at 8 o'clock at the Lasher Funeral Home, Woodstock, and cremation will take place Thursday morning in Troy.

Mr. Hopf was born in New York city. He has been coming to Woodstock for the summer season since 1919. He was formerly employed on the old "Evening World," was connected with the firm of Drygoods Economist for many years; and with the Federal Advertising Agency for 10 years. During the last few years he has been doing free lance work.

He originated the comic strip, "Reddy, the Rooter," also "Lollypop" and the little dog character of the same name. For the New York Herald Tribune, he created "Animal Grams."

Surviving are his wife, Mrs. Magda Hopf, and one sister, Mrs. John Merklein of Eatonville, Wash.

Comments:
Animalgrams appeared in the LA Times in late 1937. However, I can't access it, so I can't say whether it qualifies as a comic strip or not.

Hello, All---"ANIMALGRAMS" was actually done for the HERALD-TRIBUNE's syndicated Sunday magazine supplement, "THIS WEEK". The supplement began on Feb. 24, 1935, and outlived the Herald-Tribune by a few years, ending in 1969. THIS WEEK appeared as part of the LOS ANGELES SUNDAY TIMES beginning on Sept. 12, 1936, and it's the earliest issue I have access to. ANIMALGRAMS is already there on that date, and the last one appeared on Mar. 27, 1938. It's a small, one-column cartoon with a four-line humorous poem about the animal of the week.

CORRECTION! The date of the earliest found THIS WEEK is actually Sept. 12, 1937. My eyes are going on me.

My Google news link aboce gives as the earliest date 25 April 1937, and as the latest date 26 December 1937. Those dates don't come from the LA Times but from the Baltimore Sun.

Will cover Animalgrams in an upcoming post on 6/28. Thanks for all the leads!!!!

Obscurity of the Day: Mr. Fergetit

George Hopf, who has not yet made an appearance on the Stripper's Guide blog, had a delightful cartooning style and sense of humor that I really enjoy. He did a little work at the Philadelphia Inquirer, and then moved to the New York World where he stayed for the better part of a decade. At the World I guess he must have had other duties in addition to cartooning, because his short run strips were punctuated with long dry spells.

Hopf's first series at the World was Mr. Fergetit, which ran from August 21 to September 24 1904 as a single-tier quickie in the Sunday comics section. Why this delightful cartoonist wasn't given better billing is a mystery to me. Here was a guy who really 'got' how a newspaper strip worked when plenty of other cartoonists at the big New York papers still seemed pretty clueless.

Profuse thanks to Cole Johnson for the heads-up on the existence of this strip and the scans!

Comments:
I quote enjoyed this one. Thanks! 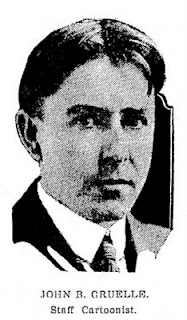 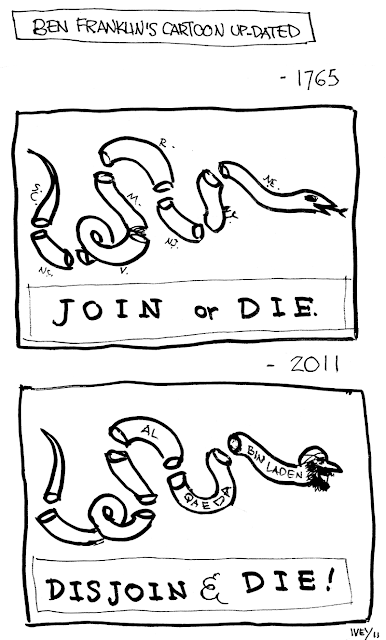