Yes, the book that I've been talking about for years is finally published and available for purchase! American Newspaper Comics: An Encyclopedic Reference Guide is the project I've been working on for over 25 years. It offers all the vital data on most every comic strip or cartoon panel series ever published in U.S. newspapers.

All serious newspaper comic strip fans and collectors will find this book an invaluable reference. Whether you want information about an obscure title, or need to check the 'vital statistics' of a popular fan favorite, American Newspaper Comics provides authoritative answers.

Over 7000 distinct newspaper comics series are covered, with the following information offered for each:
In addition, the book also includes:

The book is a huge 600+ page brick, weighing in at just shy of 5 pounds. (On receiving his copy, comics historian R.C. Harvey dubbed it "the Magnificent Monster".) High quality library hardcover binding was used, ensuring that it will weather years of constant use.

The suggested retail price of the book is $150, reflecting not only the vast scope of the work and the decades of research that went into it, but also the publisher's assumption that it will be sold primarily to libraries and educational facilities. However, I have assured the University of Michigan Press that there is a significant community of fans, collectors and researchers who would love copies for their own bookshelves, but for whom that price might well be a budget-breaker. Therefore, in a marketing tactic not usually used for academic reference books, the Press is offering the book to collectors for a whopping 40% off the suggested list price.

To get the 40% off price, click here to go to the publishers website, and when you place your order use the promo code "COMICS" to receive the special discount.

The book is also available on Amazon but the discount pricing seems to come and go on a daily basis. The publisher is not certain that the discounted price will ever be consistently found there, but if you are dead set on purchasing at Amazon, keep a watch on the listing. There is already a really wonderful book review there that you might check out, though!

If you are in Europe, you can order at discounted price from Eurospan, and The Book Depository offers free shipping all over the world and gives a 25% discount off cover price.

Comments:
I'm sure all loyal readers are thrilled for you. Fantastic!

Congratulations, Alan! This is a great accomplishment!

Wow, what an achievement. Ordered!

I got my copy in today! Looks real good!~ rating: A+

Here's my recent review of this amazing book. http://booksteveslibrary.blogspot.com/2012/07/review-american-newspaper-comics.html

I've got my copy -- looks great. Is there someplace on line here, you'd like us to give corrections/amendments? I only have one minor one at the moment, but I doubt you want such comments here filling things up.

Hi Allan,
I ordered a copy through Amazon, looking forward to using it! Are you going to return to regular posting soon? I really miss Herriman Saturdays!
Thanks and Congratulations!
Mark Kausler

It made me laugh. I flipped through looking for the most obscure strips and morsels of equally obscure information, and there it all was. Unbelievable! This is an amazing and valuable accomplishment that will sit within a bent elbow's length of my desk. Congratulations on a massive undertaking with exquisite results! Wow!

Congratulations, Allan! What a monumental achievement!

A must for comic readers and story researchers. I can say this is a holy grail. Thanks.

So is the publication the culmination of your work, and this the final entry in STRIPPER'S GUIDE?

Just got our copy for the college library...can't wait to go through it!
Congrats, Allan!
Best,
Kassie Schwan
(you helped me with "Salesman Sam ")

Now who can name every character in the border?

Scott --
That may well be worth a free copy of the book -- not an easy task! Maybe I'll do a contest.

The promo code doesn't work anymore. E-mailed publisher but so far no response.

Hi Dana --
Contacted the publisher, they are going to extend the promo to the end of September (it expired at the end of August apparently). It may be a few days before the promo will be reinstated, so please be patient.

Allan, thanks for opening a window for ordering it at the discount. Have a friend I promised a copy that I'll buy as soon as the promo is reinstated.

Michael Barrier has a page on his website where he posts corrections etc. to his books. You might want to do that for ANC

Albert "Bert" Cobb was born in Chicago, Illinois around 1869, according to the New York Times, April 3, 1936. In the 1870 U.S. Federal Census, he was the youngest of two sons born to Henry and Sarah. His paternal grandfather was the head of the household; they lived in Chicago. His father and uncle were manufacturers of spring beds. The Times said he grew up in Wilmington, Delaware.


In the 1880 census, Cobb was the second of six children. The Cobbs lived in Wilmington on Washington Street. His father was a car spring manufacturer. According to the Times Cobb "attended military school and the Philadelphia Academy of Fine Arts."

In the mid-1890s, he contributed artwork to sheet music. Tin Pan Alley: An Encyclopedia of the Golden Age of American Song (2003) said: "…Much of their success with coon songs could be attributed to illustrators Bert Cobb (1869–1936) and Edgar Keller (1867–1932), who designed their covers. Their artwork was, in large part, responsible for the sales that these songs enjoyed, so M. Witmark and Sons, started using Cobb and Keller, too." In the late-1890s he was cartooning in Philadelphia.

Cobb has not been found in the 1900 census. He was a contributor the The World's comics section in 1900.


A Kittiwake of the Great Kills (1904), a collection of animal short stories, had an illustration by him. Three Cobb caricatures were featured in Representative Men of the West in Caricature (1904); page 47, Francis Emory Warren; page 69, C.B. Schmidt; and page 259, Frederick W. Standart. In 1907 his work turns up in Boston; he produced Stumble-Toe Joe, and Ambitious Teddy.

Cobb has not been found in the 1910 census. His Meddlesome Millie appeared in the Boston Post beginning in February 1911. Later that year he was in Detroit, Michigan when he was a patient at the Battle Creek Sanitarium. His arrival was reported in The Battle Creek Idea, September 15, 1911. During his stay in Chicago, he contributed several caricatures to the Hamiltonian and Republican National Convention Program. The convention was held in Chicago, June 18, 1912.

The Times said: "…He specialized in political cartoons and formerly contributed to Puck and other magazines. He was formerly a cartoonist for The New York Globe, The Boston Globe, Kansas City Star and other newspapers…."

He has not been found in the 1920 census. The Greensboro Daily Record (North Carolina), June 23, 1922, published news of Cobb's cartoons series:

Bert Cobb, one of America's foremost cartoonists, who is preparing a series of cartoons of "Captain of the Automobile Industry," has paid Clarence A. Earl, president of Earl Motors, Inc., Jackson, Michigan, the compliment of giving him third place on the list of executives whose likenesses he will reproduce. Mr. Cobb's series of cartoons are being sent to newspapers in all parts of the country and are arousing considerable interest in automobile circles….

The Times said: "Since 1923 he had devoted himself largely to etchings of famous dogs.…" The New York City Directory 1925 listed his occupation as cartoonist and home address as 180 West 238th Street.

The 1930 census recorded him in the Bronx, New York at 3820 Waldo Avenue. He married Elizabeth when he was 51 years old, around 1921. His occupation was artist. The St. Petersburg Times (Florida), February 17, 1930, reported the exhibition of his etchings. Two books of his dog etchings, Portraits of Dogs and Hunting Dogs, were published in 1931. 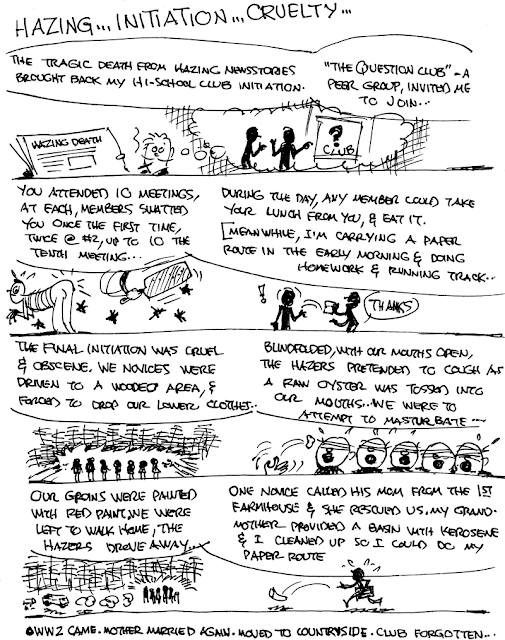 I'm pretty sure the FAMU hazing death incident is national news, but in case not, check out the stories Jim is referring to here at the Orlando Sentinel.