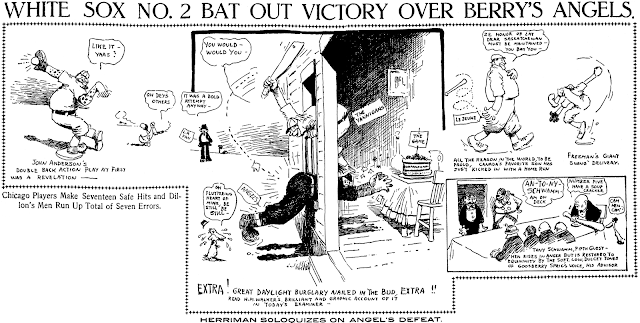 Monday, March 16 1908 -- The Angels discover that even the White Sox' second string team aren't stumblebums by any measure. The #2 squad trounced the Angels 12-5, and Hen Berry's boys didn't manage to put a score on the board until the 7th inning, when pitcher Freeman (whose first name was never mentioned) tired and started letting Angel hitters connect.

Comments:
Hey Allan,
Is that H.M. Walker referred to in this week's Herriman Saturday strip, the same H.M. Walker who wrote titles and dialog for Hal Roach in the 1920s and 1930s? I think Walker and Herriman were friends as well.
Thanks for these great Garge strips!
Mark Kausler

Hello, Allan-----H.M.Walker had a daily column in the L. A. Examiner, "THE WISDOM OF BLINKY BEN". Roach hired him away in 1917. He wrote hilarious inter-titles, the best in the business. I wonder if, by chance, you saved any of these columns when you went through the "L.A.X."? Many years later, Walker invited his old friend Herriman hang out at the Roach studio, watching the OUR GANG kids at work. 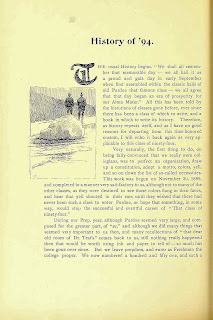 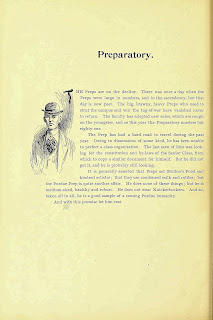 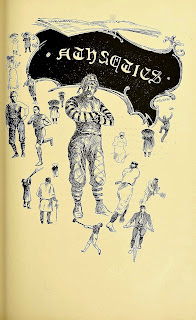 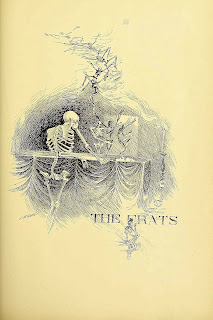 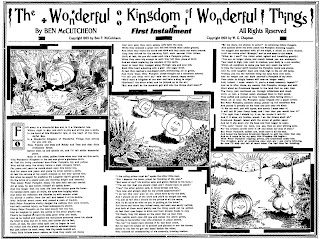 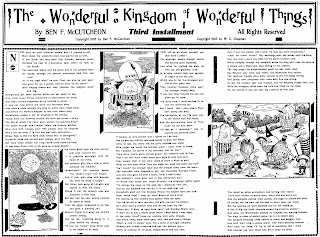 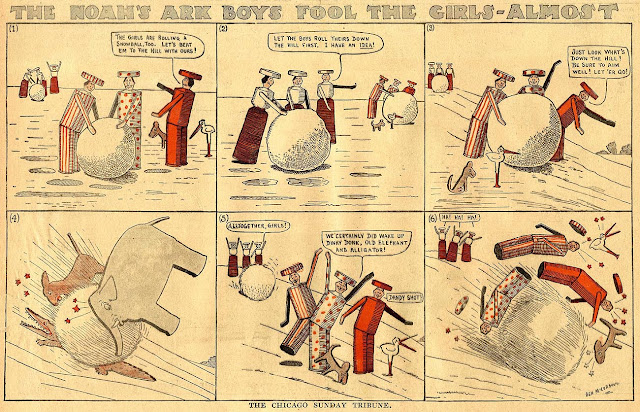 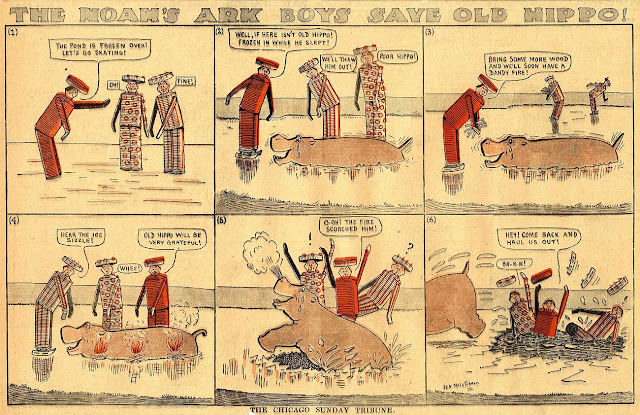 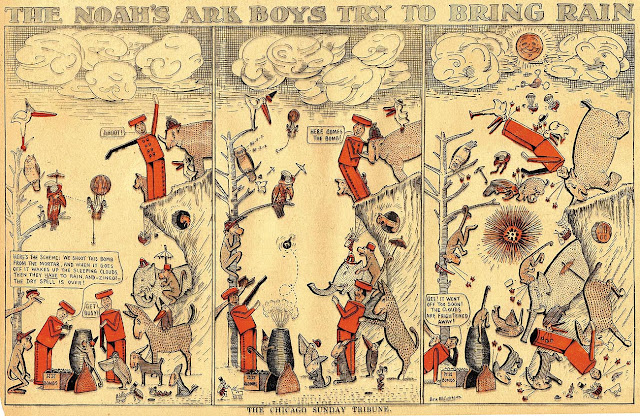 In some religious homes, children are only allowed to play with certain Bible-centric toys on the Sabbath. Among certain Christians the toy of choice are Noah's Ark figurines. Parents may delude themselves into believing the kids will act out solemn Biblical tales with the figurines. Fat chance. Ben McCutcheon shows us the violent scenarios that are more typically played out with those Sunday toys when the adults are out of earshot.

Comments:
Hello, Allan-----What was the relationship between Ben McCutcheon and the TRIBUNE's famed editorial cartoonist, John T. McCutcheon, if any? 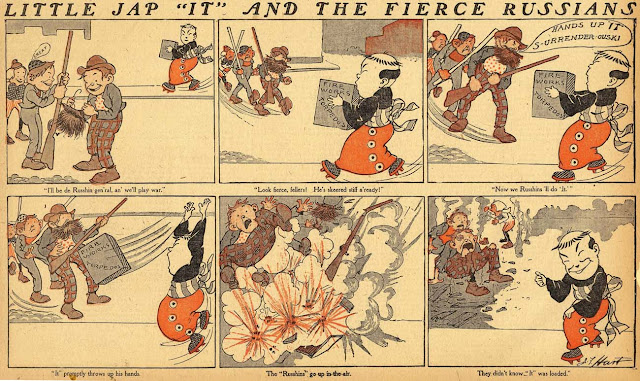 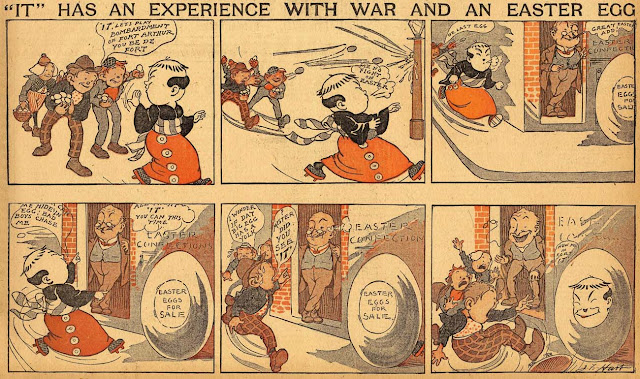 Obscurity of the Day: Dr. Katz

The 1970s and 80s were the last heyday for licensed characters in comic strips, but here's a late entry from the 90s; Dr. Katz. The comic strip was an attempt to parley a mildly successful animated TV show on the Comedy Central cable network.

The show was memorable, at least to me, mostly for the ever-wiggling drawings that always gave me a headache by the end of the show. The animation process was called Squigglevision, a bargain basement computer-aided method for producing really cheap animation.

The show featured a nebbish psychologist and his good-for-nothing grown son, Ben, and most of the charm of the show was in the deadpan voicework. If you liked the show, and read the strip with those voices and cadences in mind, it was a pretty entertaining strip, and it did a good job of translating the TV series onto paper. Which is not all that big a leap because, as I said, the animation was limited in the extreme.

The Dr. Katz TV show ran 1995-1999, and the strip ran January 6 1997 to December 26 1999, distributed by LA Times Syndicate. Initially the writing was credited to Bill Braudis, who was also a lead writer on the television series. By 1998, Braudis turned over the writing of the dailies to Dave Blazek (who was also writing the panel Loose Parts for the syndicate at the time). Whether Blazek handled the dailies consistently from then on is up for debate because the dailies often leave off the writing credit.

The art was handled by Dick Truxaw, a commercial artist who considered doing the art on a newspaper strip to be "the fulfillment of a dream."

The LA Times ran the daily strip to the stated end date, but not the Sunday. The latest I can trace the Sunday is to April 4 1999, in the San Francisco Examiner-Chronicle.

Comments:
I used to like the way it was animated on tv, the way he shook because of the freehand drawing style of animation.

Here's how Blazek explained it to me a couple of years after the strip ended.
"Bill's standup career was
taking off back in the late '90s, and he was having trouble producing
for the strip while doing many other things. He's a funny guy. The LA
Times Syndicate was filing the hole with a stable of writers. Shortly
after Loose Parts was picked up by LATS, Anita Tobias asked me if I
would be interested in joining that stable. After a few months of
that, they said they wanted to whittle that down to one writer, and
they wanted that to be me. So, for about two years, I wrote the
Mon-Sat. comics, and Bill wrote the Sundays. (Although, there are
still a bunch of Sundays I did ... I can't remember how that came
about.)"

I remember this strip. Completely forgot about it until this post.

There was a "Rugrats" comic strip, too. One of my papers ran that strip.

The show is actually computer generated. They used a computer animating method called "Squigglevision." It was also used in Home Movies.

Aaaannnnddd...
Thanks for posting these. I have been on a bit of a Dr. Katz binge for the past week and am just learned that there's a Dr. Katz comic series and a few short live action episodes. 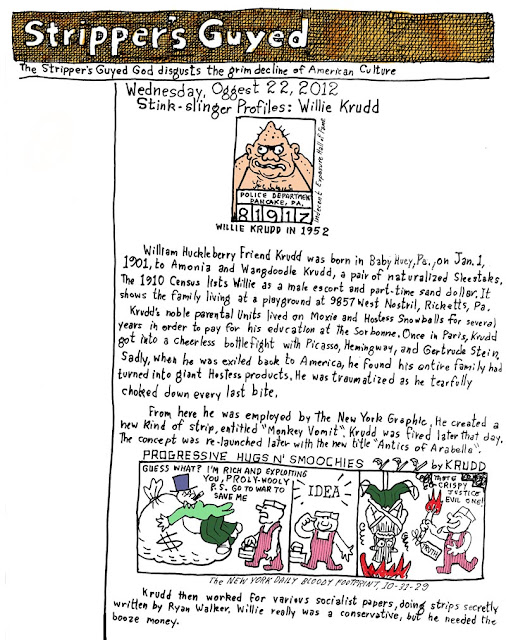 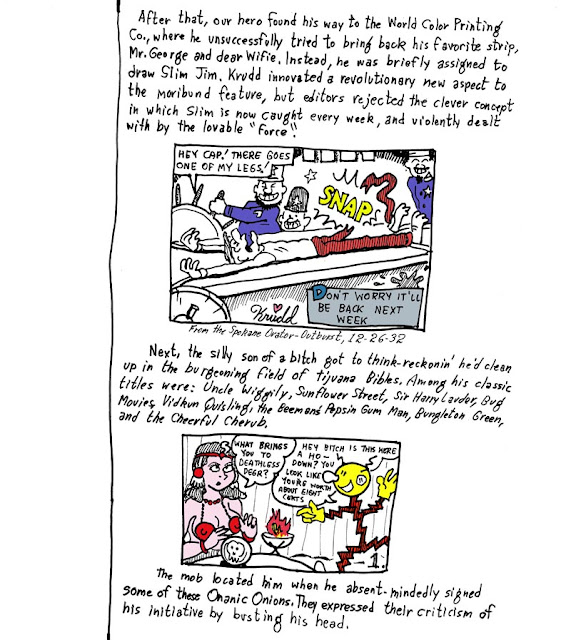 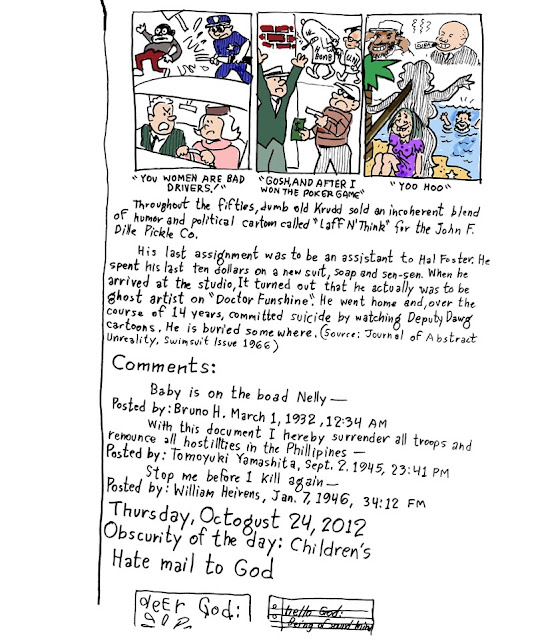 "Krudd's" work is better than more than half of what's running in papers these days (yes, I decided to be charitable).

And am I the only one who thinks "Children's Hate Mail to God" should be syndicated immediately?

Yes, you must be. 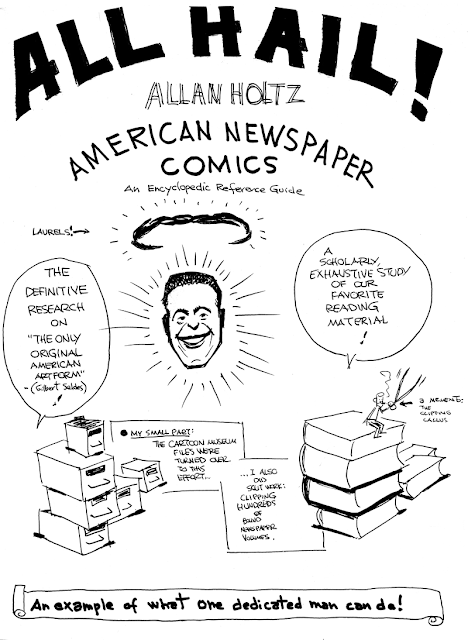 I wish it noted that this Sunday Comic seemed a tremendously egotistical thing for me to publish on my blog, but Jim insisted that Sunday belongs to him, and he can submit what he please.

Thanks Jim, I'm blushing. Tho the caricature keeps me from getting too vain ...