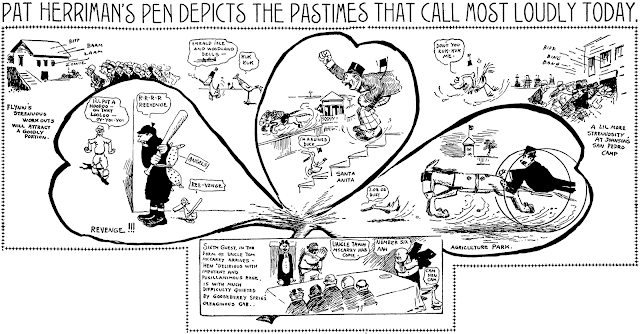 Tuesday, March 17 1908 -- It's St. Patty's Day, and Herriman's task is to highlight all the various venues that will provide sporting fans some entertainment on this unofficial holiday. The White Sox "B" Squad will again face the Angels at Chutes Park, the horseraces at Santa Anita will be running, and boxing fans can visit the training camp of either Jimmy Flynn or Battling Johnson to see what shape they're in a week before the big fight. Also on the sporting roster is harness racing at Agriculture Park.

Hen Berry continues searching for the fellow who impugned his weasel-skin hat. 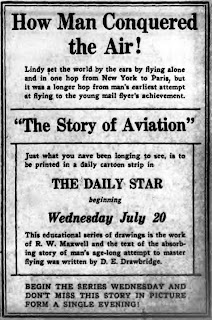 Obscurity of the Day: The Story of Aviation


When Lucky Lindy, against all odds, touched down in France on May 21 1927, the level of public interest in aviation went soaring sky high. Newspapers cashed in on this mania through the printed word, pictures, and, of course, comics. In addition to aviation strips like Tailspin Tommy and Flying to Fame, there were more sober entries like this one, The Story of Aviation. It was obviously rushed into production by Superior Features, but nevertheless did a creditable job of telling the history of the subject and explaining a little of the science of flight as well.

In the only newspaper so far found that ran this closed-end series, the Queens Daily Star, it began on July 20 1927, a Wednesday. That means the series was thought up, written, drawn, sold and in print within just two months, a pretty incredible feat, if not quite as impressive as Lindy's. The series seems to have lasted four weeks, twenty-four daily strips. I say seems because the last strip I've seen is #23, but it looks to be wrapping up the story, and the existence of a #24 is a pretty good bet to make for an even four weeks.

The art, which is serviceable, is by someone named Ralph W. Maxwell who has no other known comics credits. Though the writing is uncredited on the strip, the E&P advertisement for the strip did supply an unexpected credit, to a woman, Doris E. Drawbridge. A quick Google check reveals a possible marital connection between writer and artist -- this copy of a book of poetry for sale on eBay is signed Doris Drawbridge Maxwell.

Thanks to Mark Johnson for alerting me to this feature, and supplying photocopies!

Comments:
The Lindbergh strip (Tuesday, 16 August 1927) was the final episode in the series. 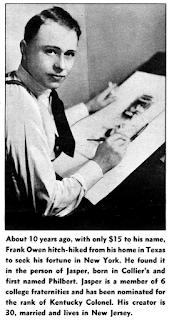 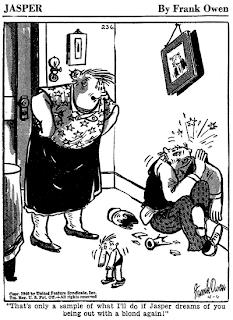 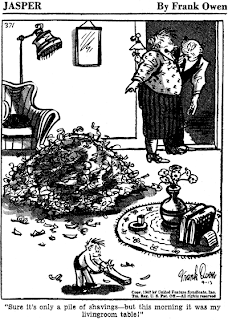 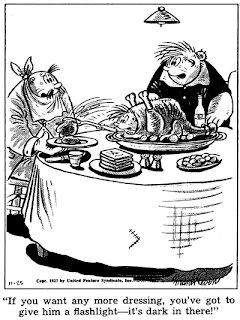 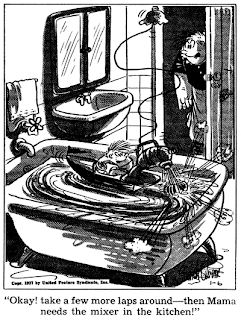 Obscurity of the Day: Ossie Tittle

With all the interest in so-called 'screwball' strips, I was surprised to find hardly a word being mentioned in the standard references, nor around the whole darn interwebs, about Frank Owen or his strip Ossie Tittle. While I would not call it a great strip, it certainly was about as screwy as they come. About the only thing I could find was a very short piece on the Comics Journal's site by the usually anything-but-terse Donald Phelps.

Owen's drawing style recalls Milt Gross, and his gags are, if anything, crazier than most of the stuff Gross came up with. Owen is well into Bill Holman no-holds-barred asylum-bound wackiness. If there was any underlying plot-like structure to the strip it is lost on me, though Phelps seems to have managed to uncover some method to the madness. All I can say is that we have Ossie himself, a big stupid lug, and a lot of second-banana big stupid lugs (both male and female varieties), some even stupider lugs that make cameo appearances, and the occasional child who is smarter than the balance of the cast put together.

Ossie Tittle ran from January 6 1936 to March 6 1937, distributed by Consolidated News Features, one of the several NANA syndicates. It was a daily and Sunday effort, with the Sunday being accompanied by the topper strip Bumpy Bear. The Sunday may well have had an even shorter run than the daily; I have only seen examples from June to September 1936.

Whether the strip did badly, or Owen felt under-appreciated is unknown, but the strip was discontinued in favor of another feature, which we will get into tomorrow.

Comments:
I love the lettering style. 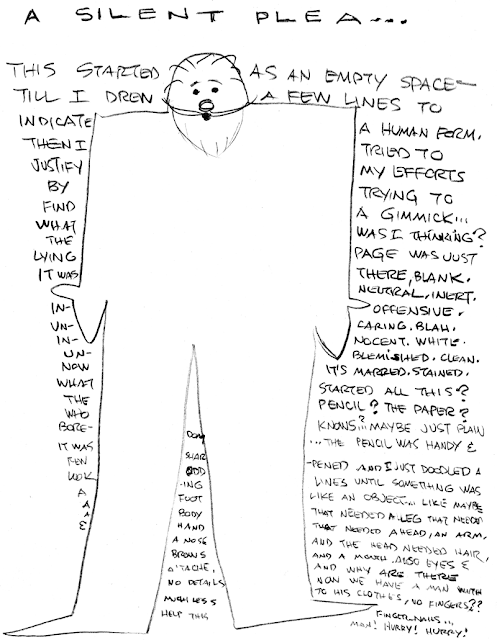