Saturday, March 28 1908 -- Baseball season starts in less than a week, and Herriman has suggestions for a deluxe parade to kick off the season. For those of you who were quick to pick up the gauntlet recently when I was left dumbfounded by a Herriman cartoon, howzabout tackling the many references in this one -- we have a mix of classical and contemporary, learned and silly, sacred and profane bits of business going on -- how many can you decode for us modern bumpkins?

In Hen Berry news, the thirteenth guest has again come just short of arriving, and the other guests are now slowly filtering away. Will Herriman drag this on forever? Starting to look that way.

Comments:
Point #1: Cap Dillon is quoting the poem "The Yarn of the Nancy Bell" by W.S. Gilbert, he of Gilbert & Sullivan. The original reads, in part:

"Oh, I am a cook and a captain bold,
And the mate of the Nancy brig,
And a bo'sun tight, and a midshipmite,
And the crew of the captain's gig."

Point #2: At least two advertising references here. The "Coal Dust Twins" is likely a play on the "Gold Dust Twins," two African-American children who were the logo for Fairbank's Gold Dust Washing Powder. You can also see in the lower right the dog, alluding to the famous Victor records "His Master's Voice" logo (by following a gramaphone-type record player)

Point #3: Saint Cecila is the patron saint of musicians (she sang to God as she was being martyred).

Point #4: I assume the Katzenjammer Kids reference needs no explication to this audience.

Why Christmas Almost Wasn't, Part I

This year's Stripper's Guide Christmas strip is a real classic of the genre, and was penned by one of the finest newspaper cartoonists of all time, Jack Kent. Kent is best known for King Aroo, to my mind one of the most entertaining strips of all time. The intellect brought to bear in constructing the deceptively simple, playful little tales in that strip leaves me in awe. Kent was a true giant, a master of the demanding daily comic strip form.

Of course, the greats seldom get their due, and Jack Kent's King Aroo never attracted a long list of newspaper clients. Although it managed to survive for fifteen years, Kent certainly wasn't getting rich in the process.  Decades later, Kent still hasn't really gotten his due -- he's rarely named in any top-ten list of comic strip greats -- but I think that is because relatively few of us have had a chance to read the strip.

Luckily that recently changed, when IDW brought out the first volume of their King Aroo reprint series, which receives my very highest praise. If enough of you folks buy copies of the first volume, and I promise you a delightful reading experience as reward, surely we will convince IDW to publish additional volumes in the series.

Why Christmas Almost Wasn't was Jack Kent's swan song on the newspaper comics page. It was produced for the 1968 Christmas season, and issued by the NEA syndicate. The characters of King Ling and Topo are basically just stand-ins for King Aroo and Yupyop, making me wonder if this storyline wasn't originally intended for King Aroo, but never got used. The story, of course, is delightful, and there are plenty of delightful Kent-ian touches along the way.

I hope you enjoy it.

Comments:
I've heard one reason v.2 is delayed is problems assemblying strips. Evidently Kent was poorly organized and his off-spring are working through a messy archives.

And addenda--IDW now says March v.2 will come out...

Obscurity of the Day: Nibbles

Mal Hancock's first syndicated comic strip was Nibbles, produced for the George Matthew Adams Service. It ran from October 24 1960 to March 2 1963. The strip didn't use continuing characters per se, but as you can see the characters were mostly animals and precocious kids. The humor was sharp and fresh, a delight in the few newspapers that took the strip.

The problem with any feature that has no regular cast is that readers seldom get emotionally involved, so if the strip disappears there is rarely much of an outcry. That made Nibbles an easy target whenever a syndicate salesman would come to call at a subscribing paper. "Hey, I've got the greatest strip ever created here -- bigger than Li'l Abner, Peanuts and Blondie combined -- all ya gotta do is drop that Nibbles thing and ya can fit it on your comics page!"

Mal Hancock and his syndicate evidently saw the wisdom of my argument against Nibbles (yes, they had time travel in order to read this), and Nibbles was replaced by Humphrey Hush, a new Hancock strip with a continuing character. Why did that one last only four years, you say? Well, just time-travel ahead to my post of August 12, 2016, and I'll explain its shortcomings.

Oh ... you're wondering why I keep calling the strip Nibbles, aren't you? Those samples up there sure make it look like the strip is called Popcorn. Well, you aren't the only one who is confused. For some reason, the San Francisco Chronicle, from whence these samples were plucked, called the strip Popcorn. Why? I dunno. What I do know is that they had me sufficiently confused that in my book (you know about the book, right?) I listed Popcorn as a separate strip. It wasn't until preparing this post that I realized that this strip and Nibbles are the self-same feature. Jeez. Thanks a lot Chronicle.

Comments:
That kid in the first strip...Patrick, is that you??

Just a shot in the dark . . . Did the Chronicle place "Popcorn" anywhere near "Peanuts"?

In the words of Charlie Brown, "AUUUGGHH!". "Popcorn" was actually relegated to the classified ads pages, a Chronicle slum for strips they ran if and when they had space. However, your explanation nevertheless makes a lot of sense! Oooh, they were stinkers! 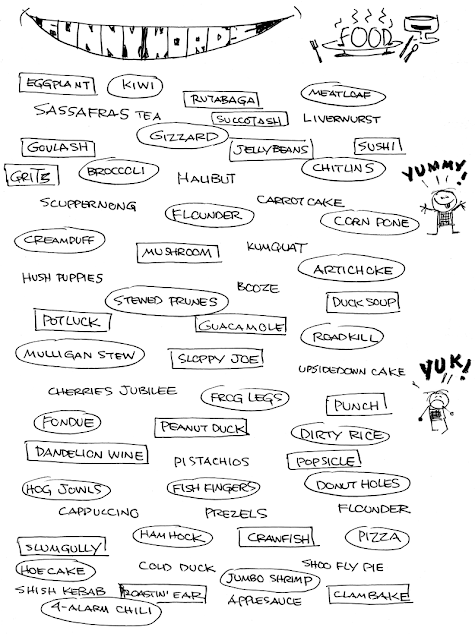