Obscurity of the Day: The Day Dreams of Danny Dawes 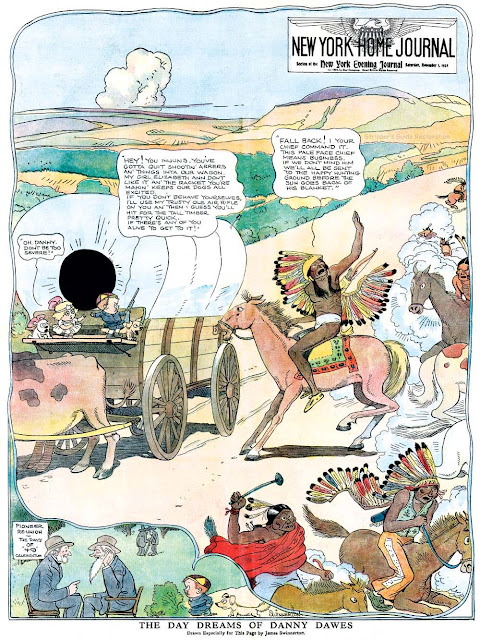 Here we have the great Jimmy Swinnerton taking a delightful turn at producing a series of newspaper magazine covers. The Day Dreams of Danny Dawes was pretty standard fare for Swinnerton, being about a little boy and frequently featuring Indians and western landscapes, but rarely do we get to see Swinnerton with the luxury of a full page panel like this. Needless to say, he takes advantage of his large canvas.

Although these covers were syndicated by Star Company, and so presumably appeared elsewhere, I've only seen them used on the New York Journal's Saturday magazine sections. And since the microfilm of the New York Journal is woefully incomplete, I can only say that the series seems to have begun on April 26 1924 and the latest I've seen so far was the December 20 1924 cover.

The feature did not run every week, and my assumption, since the microfilm runs out temporarily at the end of 1924, is that the series may well have extended into 1925.

Anyone with additional information on this series is politely begged to share!