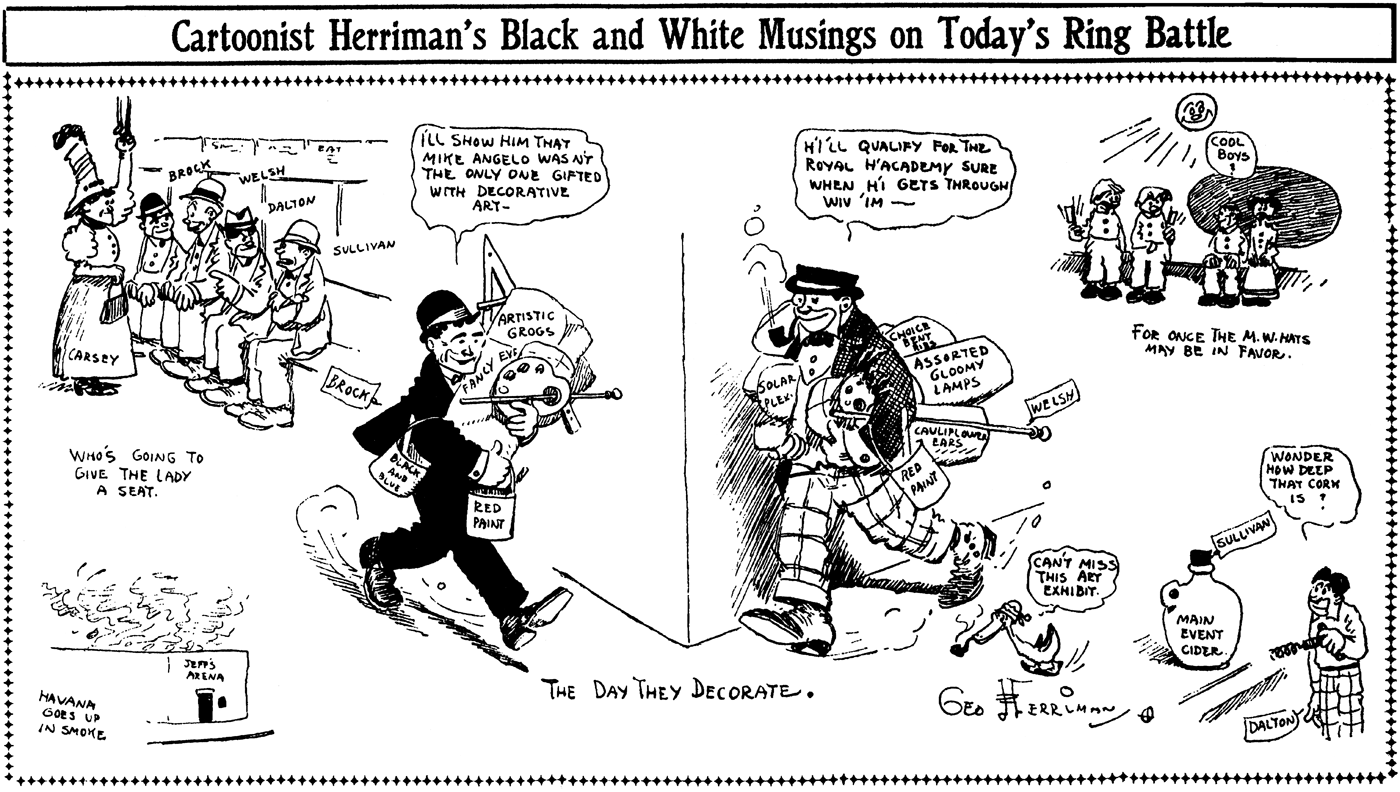 Saturday, May 30 1908 -- Tonight the highly regarded lightweight boxers Freddie Welsh and Phil Brock will meet in the squared circle at Jim Jeffries' arena. Herriman draws another boxer, Frank Carsey, in a dress -- Herriman better hope that Carsey has a well-developed sense of humor. 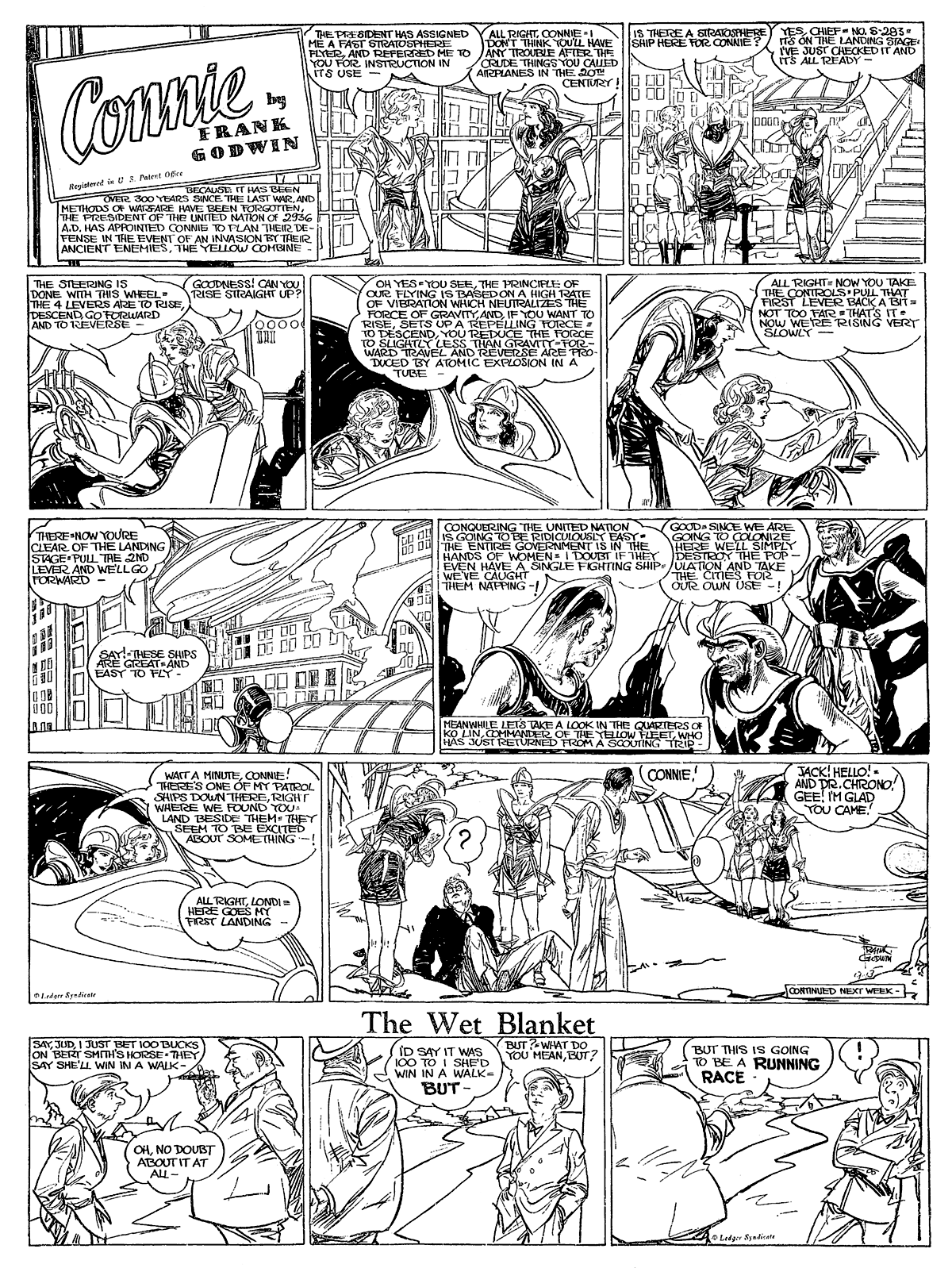 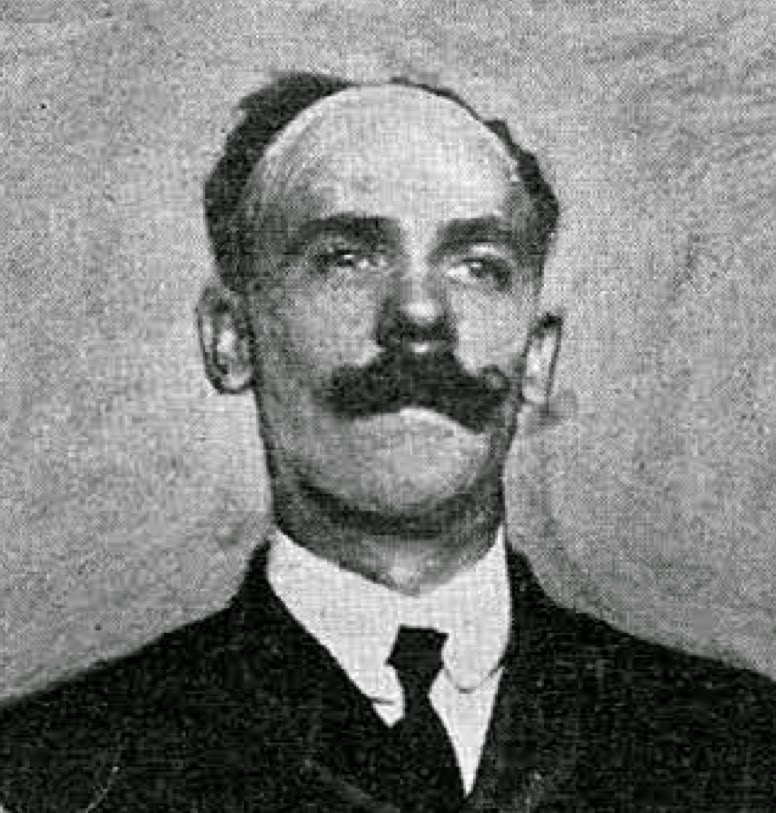 Emmett Henry Brotts was born in Seville, Ohio, in June 1865. His full name and birthplace was found on a family tree at Mundia. His birth date was recorded in the 1900 U.S. Federal Census.

In the 1870 census, Brotts was the oldest of three children born to Henry, a druggist, and Helen. They resided in the township of Guilford in Ohio.

The family lived in Westport, Missouri on Cross Main Street, according to the 1880 census. At some point, they moved to Kansas City, Missouri. The 1882 Hoye’s City Directory listed Brotts as a candy maker at Glesner, Ross & Company. The home address for Brotts, his brother, Ernest, a butcher, and father was 109 West 11th Street. The following year Brotts’ occupation was painter and residence at the same address.


Mr. E.H. Brotts yesterday reported that while he was walking along Broadway near Eleventh st. Saturday night he was held up by highwaymen and robbed of a small sum of money. After robbing him the footpads ordered him to march, which he did with haste.

When Brotts was robbed, he was an artist in a business partnership with H.W. Dickson. The city directory listing said Brotts lived at 1300 Broadway, his father’s residence. Brotts would remain there through, at least, 1888. Dickson & Brotts was located at 503 Delaware.


Mr. Emmet H. Brotts, the Journal artist, married Miss Daisy H. Chapman of Fort Scott yesterday morning at the home of the bride. The ceremony, which was a quiet one, was performed by the Rev. C.J. Coulter, a relative of Mr. Brotts, and but a few of the relatives and friends of the bride and groom were present at the nuptials. The pair left for the south immediately after the marriage to spend a week in travel. Emmet Brotts was born in Seville, O., in 1865. He came to this city in 1880, and for three years was engaged in the manufacture of candy. Giving up this trade, which was distasteful to him, he entered an architect’s office, and later formed a partnership with Mr. Dickson of this city to do general designing and engraving, which place he filled competently until his connection with the Journal.

Kansas City directories for the years 1889 to 1891, said Brotts was a wood engraver at the Journal, and in partnership with H.A. Roberts in Brotts & Roberts, engravers at 900 Main Street. In 1893, Brotts was the proprietor of the Midland Engraving Company, 900 Main Street. His residence was 722 Forest. At some point, Brotts moved to Chicago.

The Kansas City Star, June 7, 1895, covered the the Western Authors’ and Artists’ convention and said:


…original drawings were distributed among all present. These pictures were in every conceivable style used in the illustration of books, magazines and newspapers and included water color designs, tail pieces, initial letters, portraits, figure work and bits of landscape. Among the Western artists who contributed were the following: …Emmet Brotts of Chicago, who recently left here...

Brotts, a member of the artists club, Palette and Chisel, participated in its “1898 Salon de Refuse.”

Brotts’ address was unchanged in the 1900 census. He was a newspaper artist and divorced. His wife and son, Ervine, lived in Chicago with his mother-in-law, Mary Chapman.

In 1901 the Times-Herald merged with the Chicago Record to form the Chicago Record-Herald. In 1902, Brotts produced Little Pic which was a Sunday strip that ran through 1903 in the Record-Herald. He also produced numerous illustrations for the paper’s Sunday children’s section into 1905. A staff photograph was published in the Second Annual Loan & Sale Exhibition of the Newspaper Artists of Chicago (1903).

Brotts’ appearance at the twentieth annual meeting of the Illinois Lumber Dealers’ Association, in Chicago, was reported in The Lumber World, March 1, 1910: “The morning session was opened by Emmet H. Brotts, with ‘Chalk Talk.’ Like all other entertainment features of the convention, Mr. Brotts’ work was good and elicited much applause.”

In 1920, the census said Brotts, a “widower” and commercial artist, lived at 5 East Erie Street in Chicago. Also with him was his son, age 26 and a garage mechanic. 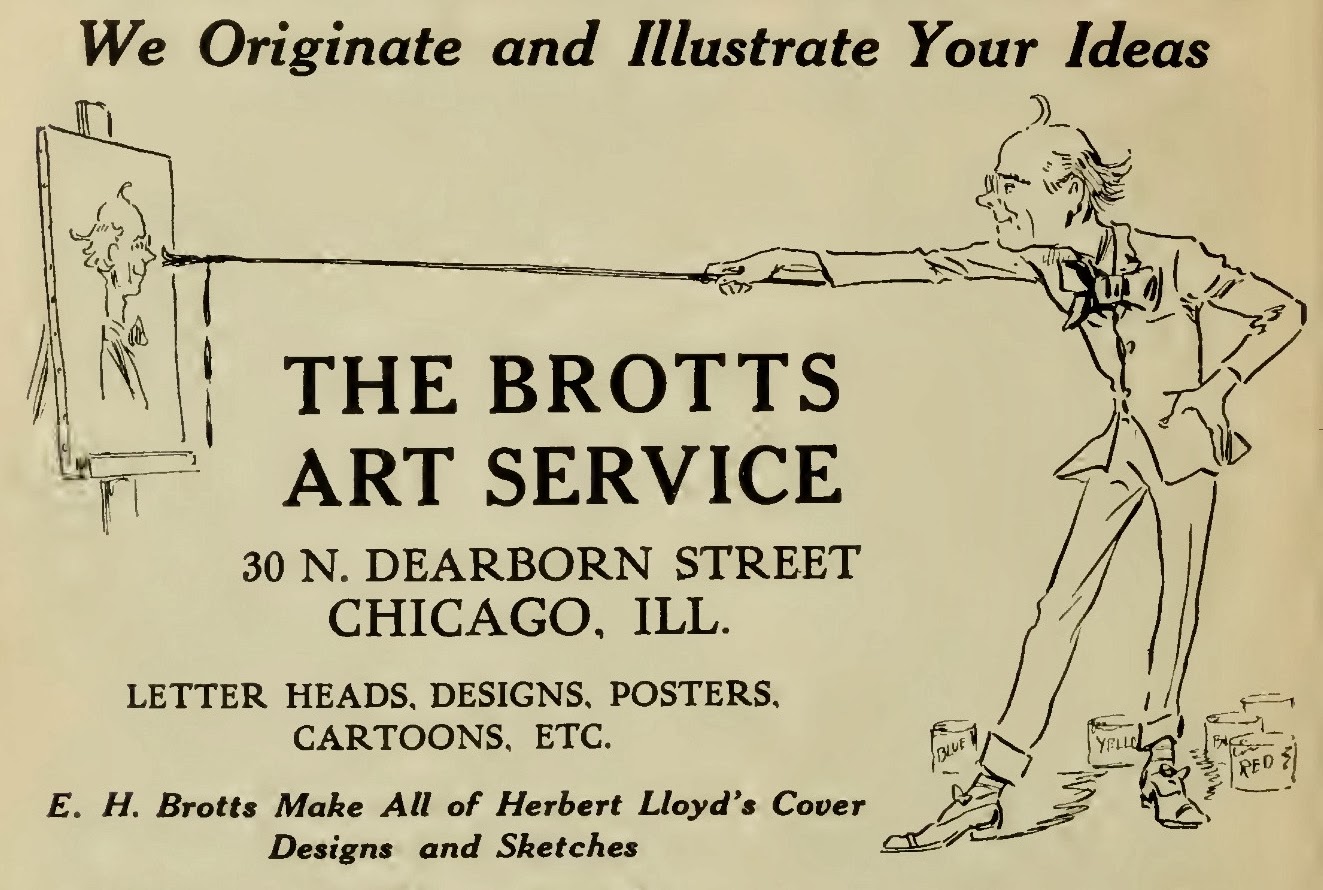 In the 1930 census, Brotts lived with his niece and her daughter in Chicago at 3745 Herndon Street. His occupation was commercial artist.

Brotts stayed with them but a a different address, 3745 Lakewood Avenue, according to the 1940 census. His highest level of education was the sixth grade. At age 74 he was no longer working.

On January 6, 1943, Brotts’ ex-wife, Daisy, passed away in Los Angeles; she had been living with her son, Ervine, and his wife, Edith. Ervine died June 17, 1947. The Illinois Death Index at Ancestry.com said Brotts passed away July 19, 1947, in Chicago. An obituary has not been found.

Obscurity of the Day: Little Pic

Little Pic started out as a mystery strip in a previous post, because I had only one example of it, and even that was missing a section which presumably would have held the cartoonist's signature. But between the title and the fact that this sample ran in the Chicago Record Herald on September 28 1903, intrepid treasure-hunter Alex Jay was able to unearth both the artist and the fact that this was an unusually long-lasting feature for the time.

Not that it was easy. Alex found that the online finding aid of Ohio State's Cartoon Library leaves something to be desired. He found this page on which we can see that Little Pic ran almost every Sunday during the period 1902-03. Only problem is that they don't tell you what newspaper they're talking about. Luckily Alex kept digging and determined that the Chicago Record-Herald Sundays of that era are in their collection, so between my sample, and triangulation of their finding aids, we can reasonably assume that Little Pic was a regular feature of the Record-Herald for at least two years, and the artist was one E.H. Brotts.

I'd feel better about the time and effort that went into determining these things if the strip had any positive merit whatsoever, but based on my sample I can't think of anything nice to say about Mr. Brotts' contribution to the history of the American newspaper comic strip.

Obscurity of the Day: Middle Ages

The Washington Post Writers Group syndicate has a knack for picking winners when it comes to comic strips. I'm not sure if they had one of their rare missteps with Middle Ages, or if newspapers failed to see its potential, or what other factors may have cut its life short.

Middle Ages seems to be a good fit for the mid-80s, when it debuted. A cast of middle-aged schlubs dealing with life's curveballs would certainly seem to be a subject that would resonate with the typical newspaper reader of the day. The gags were reasonable funny, and had just enough of an edge to be seem hip. The art, while not exactly rivaling Walt Kelly, didn't look out of place on the funnies page. The strip had a lot of workplace humor, but wisely didn't limit itself only to that venue, but let the characters have home and social lives as well. The only obvious flaw I can find is that (based on my limited archive) the cast of the strip is rather extensive, which might make it tough for new readers to follow what's going on.

The strip seems to have begun on November 12 1984. At the time the strip was, I gather, self-syndicated. At least the early strips bear no syndicate stamps. On January 7 1985, the Washington Post stamp begins appearing, and stays on the strip until its apparent demise on December 10 1985, only a year and a month into the run.

The creator, Ron Jaudon, is a mystery man to me. This is the only cartooning of his I've been able to uncover.

Here are a few mystery strips -- in this case strips for which I have seen just one or two samples and cannot find any further information. Can you provide more info? 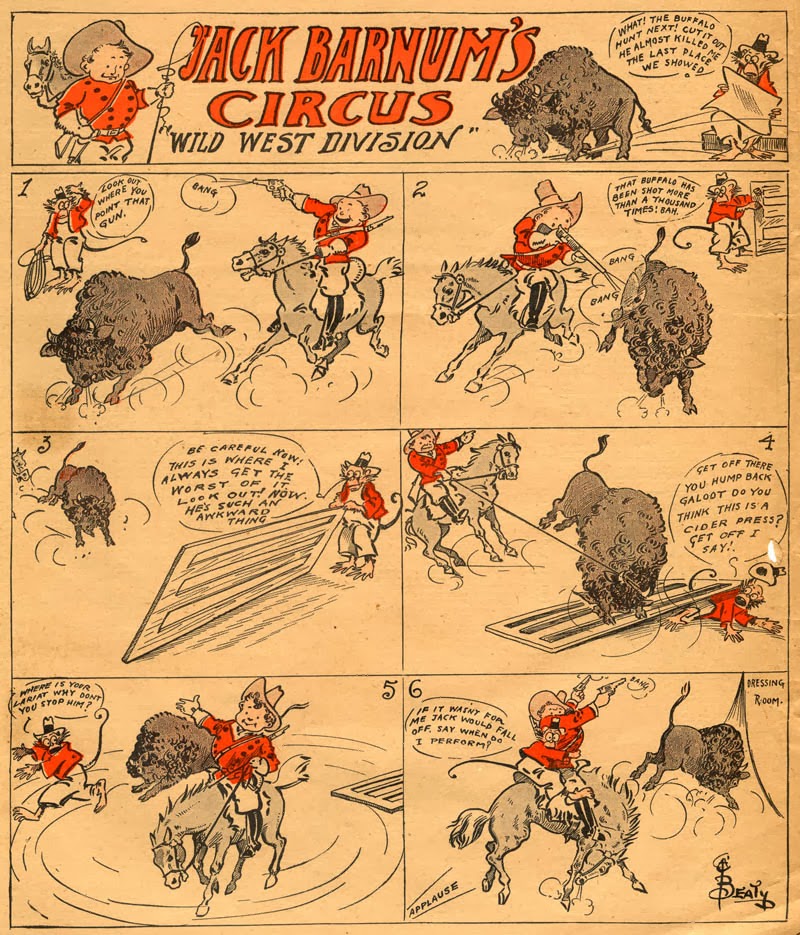 Jack Barnum's Circus ran in the Chicago Tribune, in a kid's Sunday magazine section. Since it is by C.A. Beaty I surmise that it is likely to be from around 1910-11, when we know he worked there. The page is undated and there is no content on the back to give me any clues. These sections did not make it onto microfilm (at least the versions I've worked with), and so I have no idea if this was a one-shot or a series. Can anyone help?  [EDIT -- since this post originally ran, I have determined the running dates between additions to my collection and a closer survey of the Tribune microfilm] 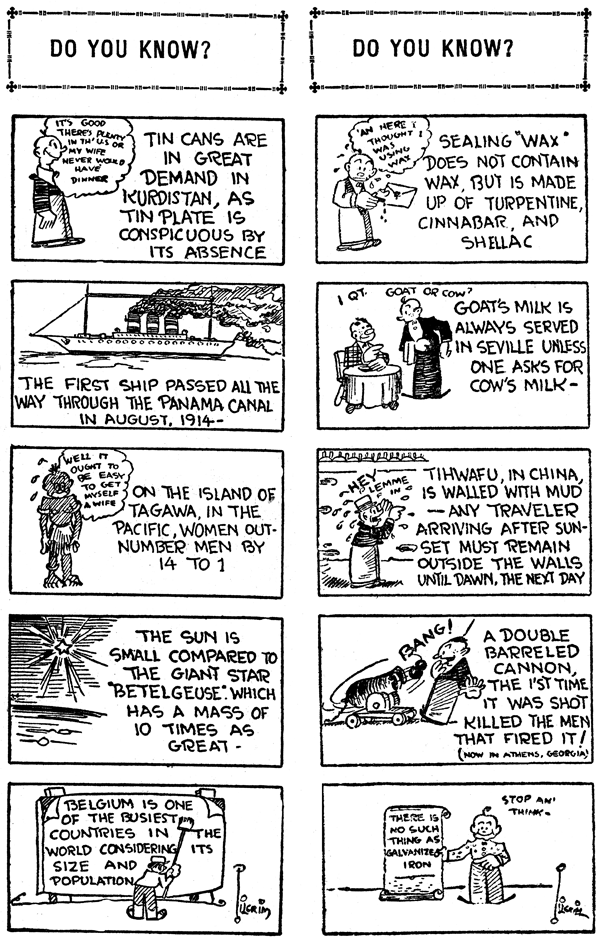 Robert Pilgrim, who is generally associated with Bell Syndicate in my mind, did this series called Did You Know? in 1929. I say series because I have a whole two examples. I can't determine based on them from what paper they were clipped. No syndicate stamps on my few samples. Has anyone seen more of this series? Anyone know the syndicate? It doesn't seem to have been advertised in E&P. 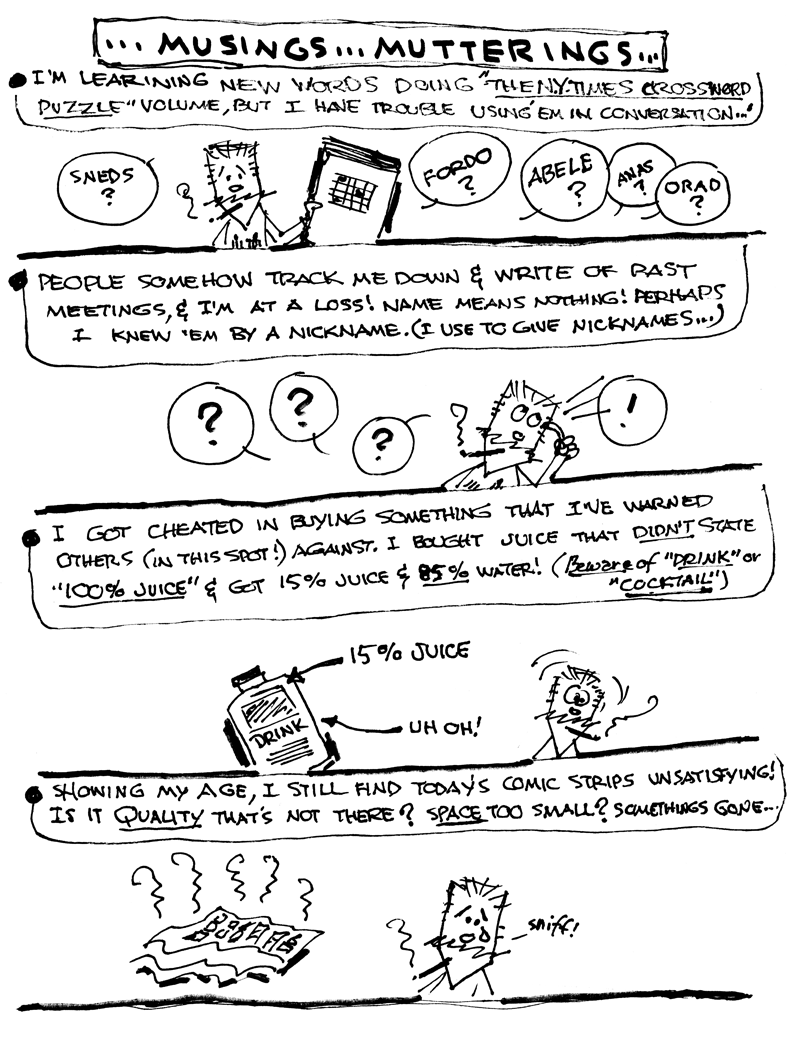 Gee, I wonder if I had an Ivey nickname. I hope mine wasn't Craphead.