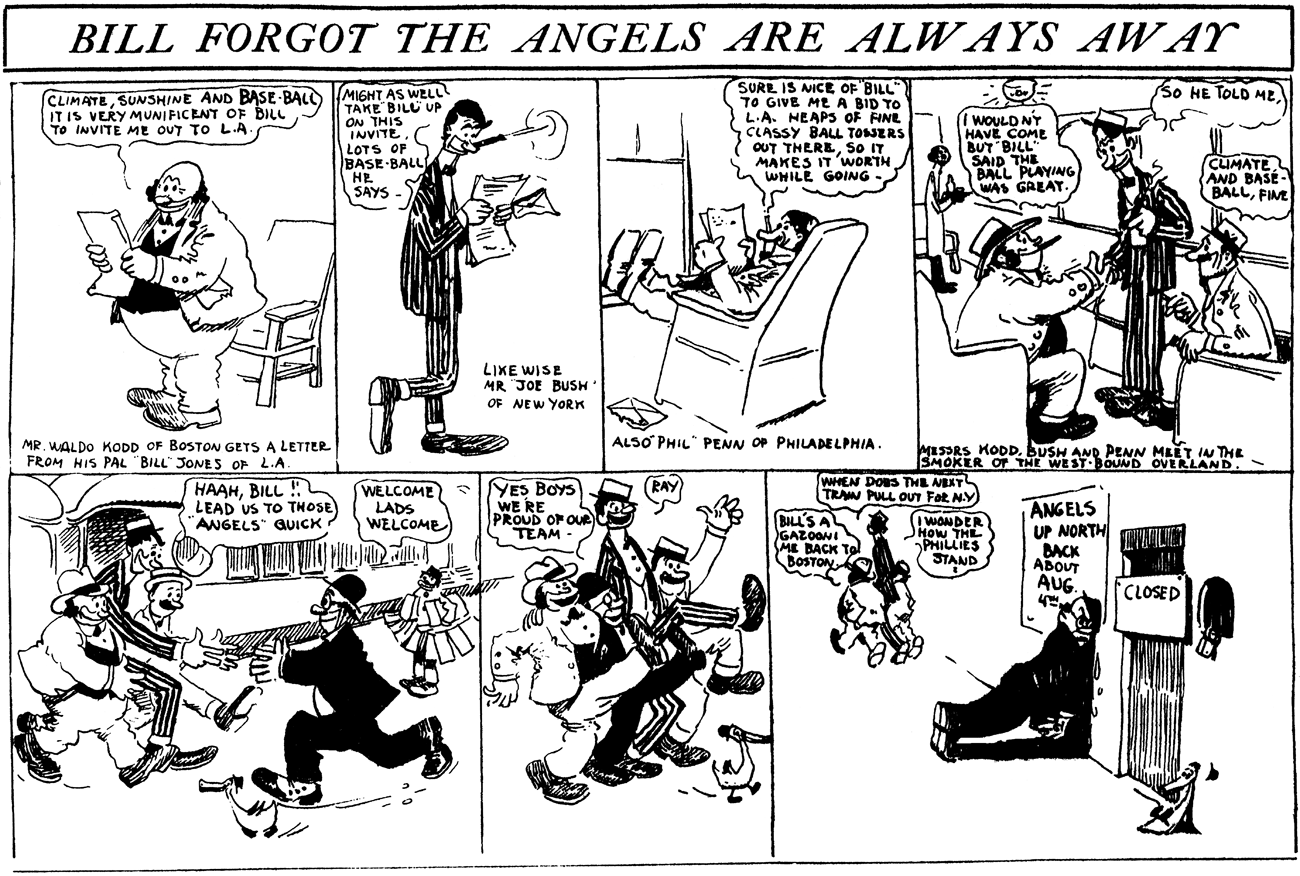 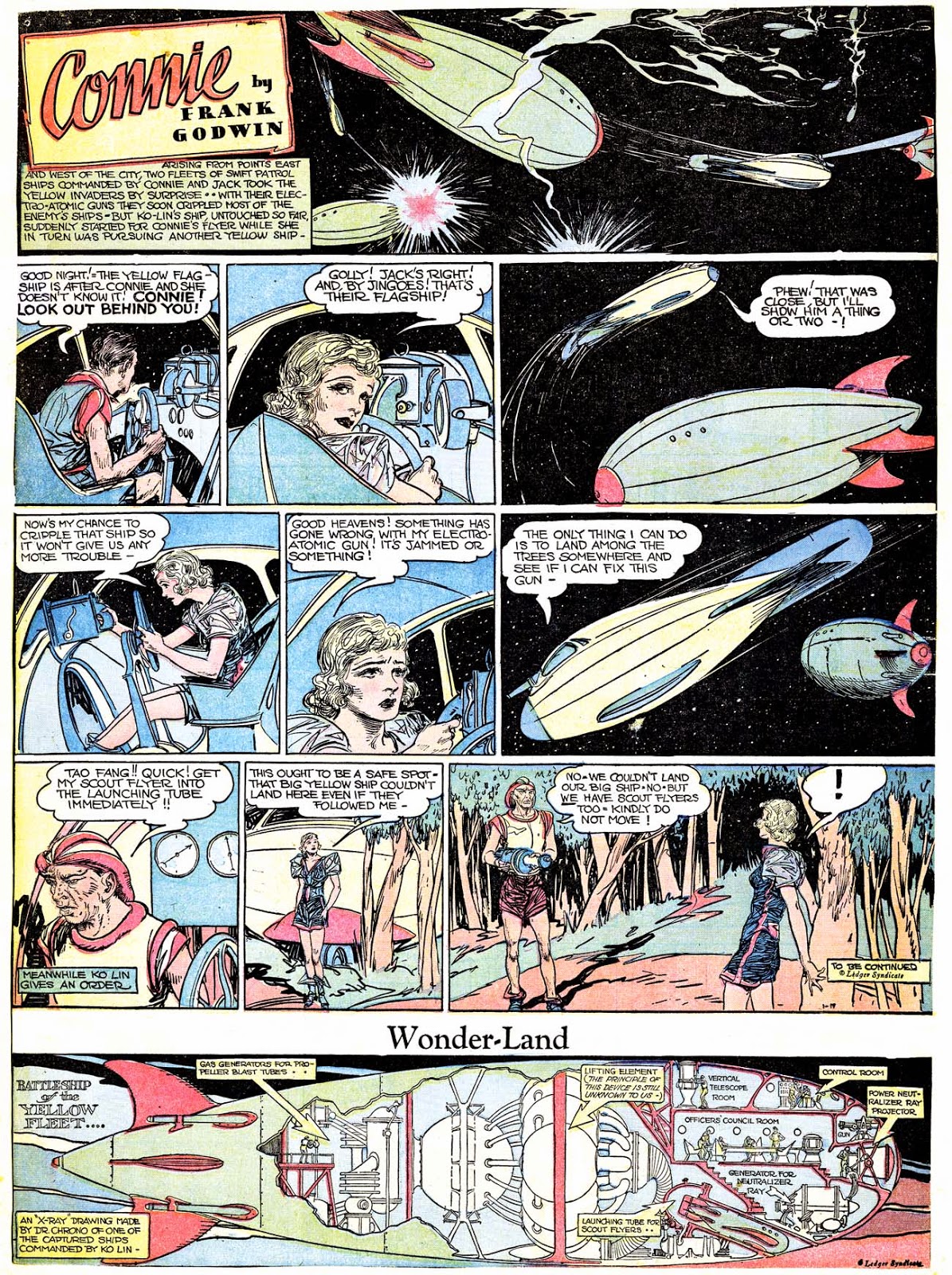 Hi. Charles here from Classic Comics Press. I do indeed plan to do a volume of Sundays. Right now, between myself and a couple other collectors I have access to roughly 300 mostly the early years. What I would love to find are the SciFi storylines. Right now it is in the very early stages. I'm thinking 2016 pub date. Cheers, Charles

That would be fantastic! 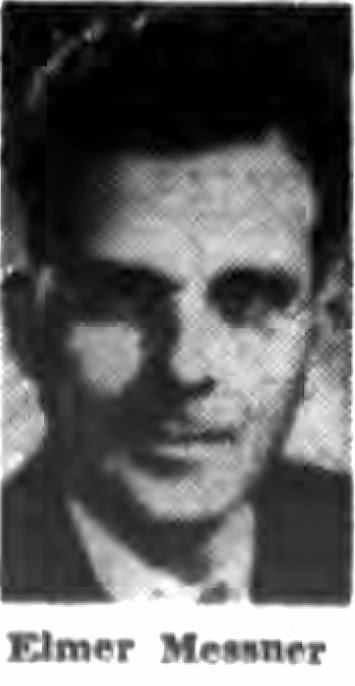 Obscurity of the Day: That's Not the Half of It 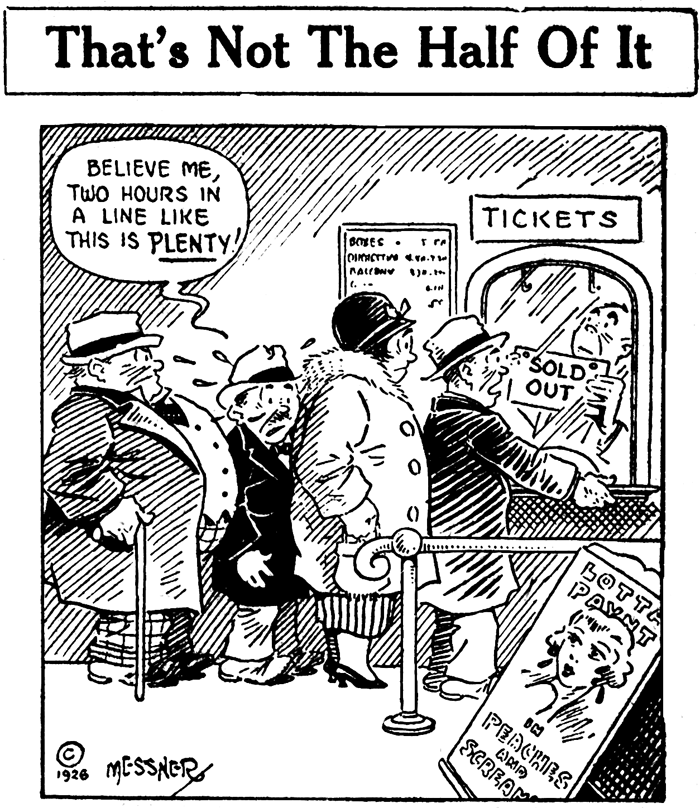 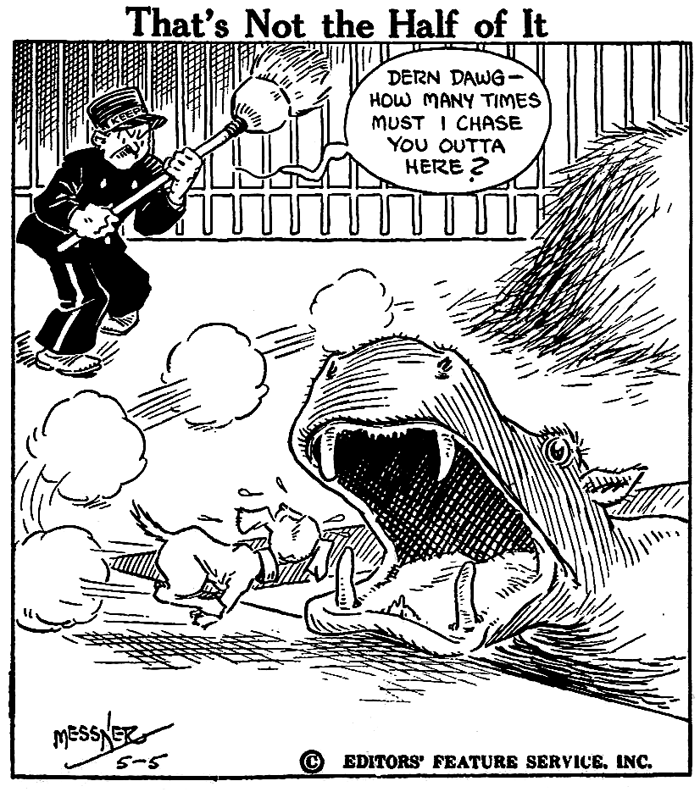 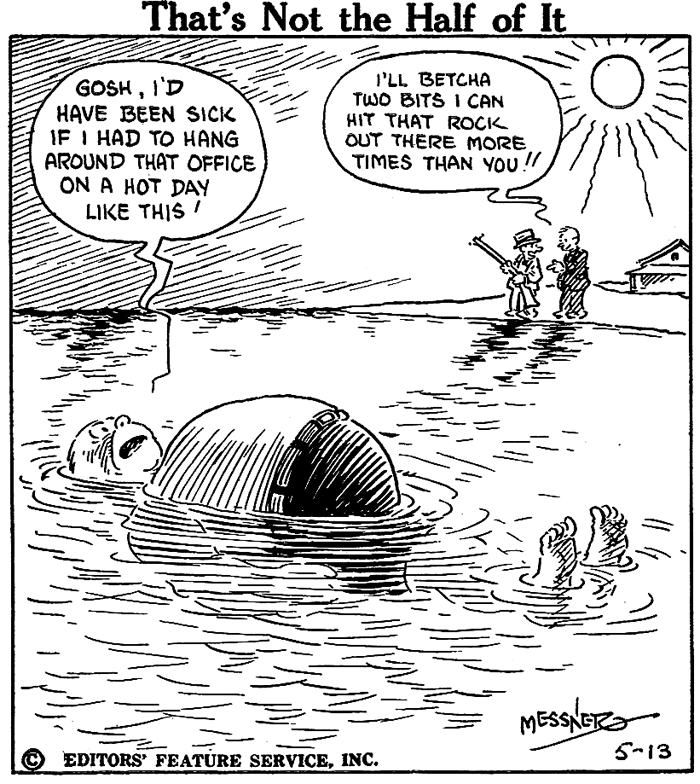 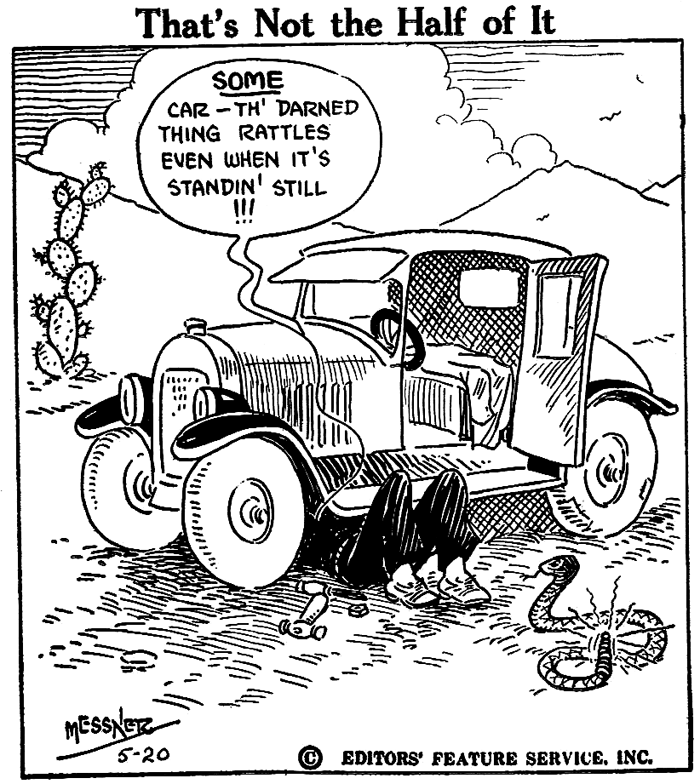 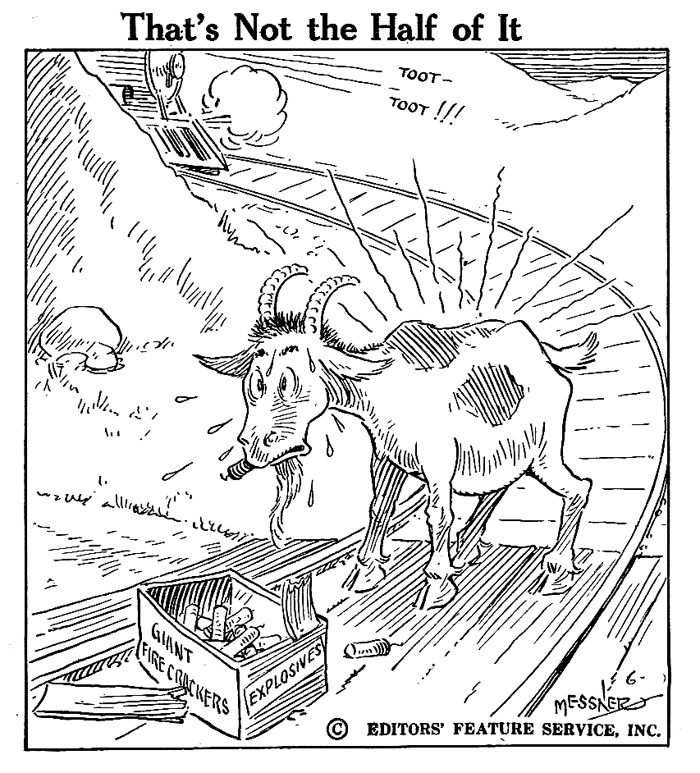 For the second time this week, we're covering one of those panel series in which your imagination supplies the yet-to-have-happened gag. I love these things when they're done well. That's Not the Half of It sometimes hits the mark and sometimes doesn't, about par for the course. I'd rate two of the samples above as good gags, the rest are either too obvious or don't really hew to the theme, which is that there is already one gag happening, but a bigger one is about to occur.

Elmer (aka Al) Messner penned this series, his only syndicated comic strip that I know of. The earliest examples I've found are from February 1926. The syndicate was the smallish Editors Feature Service, whose history is a bit murky. They were responsible for some very good features, but got bought out by Central Press Association in 1927. That's Not the Half of It seems to have been a casualty of that sale, as were many of EFS's less stellar features, and seems to have ended in July 1927.

Elmer Messner went on to a distinguished career as an editorial cartoonist, mostly for the Rochester Times-Union.

Obscurity of the Day: Dreamy Dave 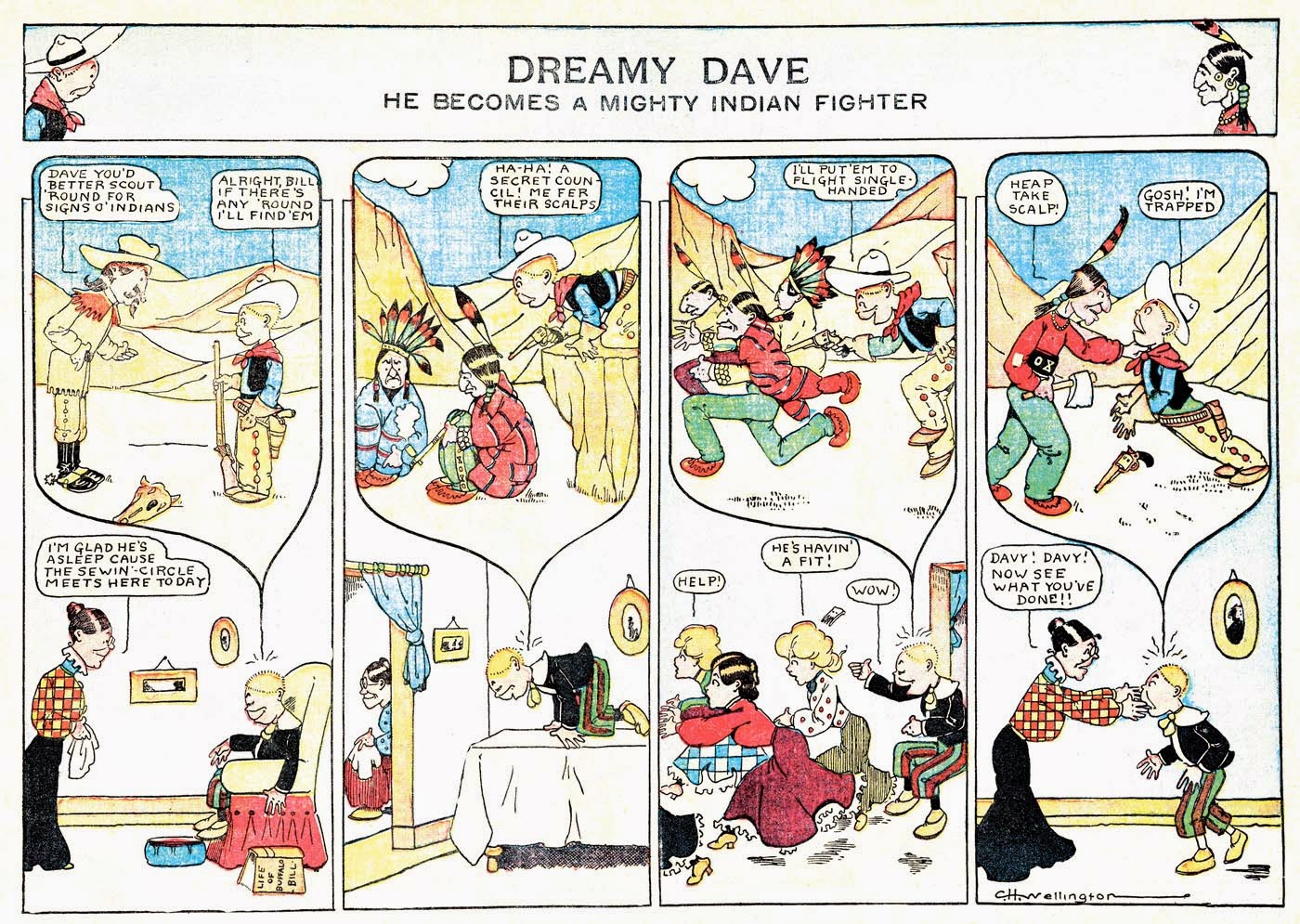 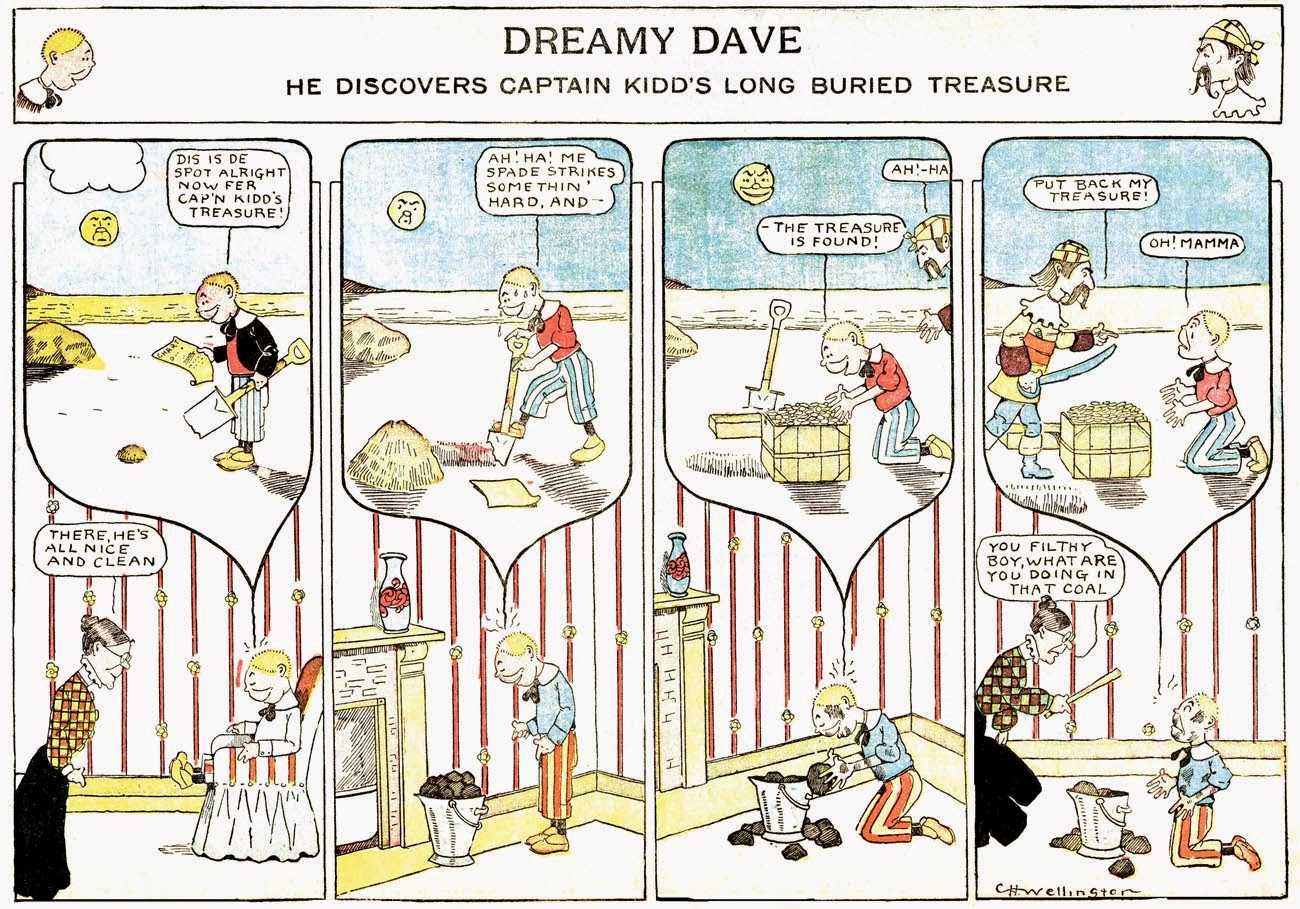 No, Winsor McCay certainly wasn't first to take on the subject of dreams in comics, but Dreamy Dave will not tempt you to knock him off his pedestal as king of the dream comics.

Dave has an unfortunate habit of acting out his dreams in real life, which should afford us with an interesting different take on the subject of dreams. Unfortunately a lack of imagination leads to some pretty darn lame strips.

Dreamy Dave debuted on November 13 1904 in the World Color Printing Sunday section, in a series drawn by someone signing themselves what looks like 'Jarrant'*. I don't have any samples at hand of his version of the strip, but you can see them all over at Barnacle Press. The barely passable art of Jarrant reminds me somewhat of Dink Shannon's work, but why Shannon would have chosen to use a pseudonym on a couple strips in late 1904 is unknown.

The Jarrant version of Dreamy Dave only lasted until November 27, a mere three episodes. However, the series was soon resurrected by C.H. Wellington, who penned additional episodes from March 12 to June 25 1905. His version might have been a bit better drawn, but it was no more humorous. Eventually Wellington would be one of the brighter humorous lights on the comics page, but this was only his second pro series, and he was still learning his craft.

* Alex Jay can find no evidence of a cartoonist named Jarrant. Though this might lead a mere mortal to assume that Jarrant is indeed simply a pen-name, Mr. Jay is not so easily put off the scent. Trying other variations of the spelling, he does find a John Tarrant, who shared a studio with New York Journal cartoonist Gus Dirks in 1902 (right before Gus offed himself). Alex says he can find no evidence of this Tarrant being a cartoonist, working for a newspaper, or of having a St. Louis connection (as did many of the World Color Printing cartoonists), but it does leave the door open to the possibility. Thanks Alex!

Benjamin Walter Depew was born in Kansas on June 3, 1888, according to census records and the Social Security Death Index. His full name was found in The Descendants of William Kellie of Scotland (1994).His parents were John Walter Depew and Evaline Sylvia Cox.

According to the 1910 census, Depew, his parents and two siblings remained in Yates Center but on Washington Street. His father was a cashier at the National Bank. Depew was 21 years old and unemployed. Information regarding his education and art training has not been found.

Not long after the census, Depew was a cartoonist at the Wichita Eagle. One of his Eagle cartoons, “Who Cut the Price?”, was reprinted in The American Pressman, March 1911, and International Horseshoers’ Monthly Magazine, April 1911.

At some point, Depew moved to Topeka, Kansas, where he worked at the Capper Engraving Company. The Wichita Stamp Club Newsletter, January 2010, said he met Coy Avon Seward who was in the Capper art department. In 1913, Depew drew a cartoon of Seward which was reproduced on page 12 of the catalog, C.A. Seward: Artist and Draftsman. A passage from the catalog said:


…He [Seward] often traveled with his friends Ben Depew and Leo Courtney, as well as author William Stanley Campbell (pen name Stanley Vestal), to observe ceremonies of Plains Indian tribes in Western Kansas and Oklahoma. Depew depicted some of these adventures in cartoon drawings and photographs…

Depew’s photographs were published in Life Among the Cheyennes; some of them can be viewed at Cheyenne & Arapaho Tribes. The book’s endpaper has a pasted, cut-out portrait that may be Depew. A photograph of Depew and Seward is here.

The Fourth Estate, August 19, 1916, noted that Depew had been at Capper “…and for several months staff photographer and artist of the Des Moines Tribune’s editorial department, has been placed in charge of the art department of both the Register and Tribune.”

Depew’s World War I draft card is not available but the U.S. Department of Veteran’s Affairs Death File, at Ancestry.com, said he enlisted May 25, 1917 and was released May 10, 1919. The Editor & Publisher, June 15, 1918, reported the Register-Tribune’s banquet honoring its employees, including Depew, who were in military service. The Hutchinson News (Kansas), February 19, 1919, mentioned a wounded “Sergeant Benjamin Walter Depew, Yates Center.”

Depew was counted twice in the 1920 census. He was in his parents’ household in Yates Center, at 307 Mary Street, and a Kansas City Star cartoonist. Over in Des Moines, Iowa, he was listed as “W.B. Depew”, a roomer at 1047 Seventh Street and cartoonist with the Register and Leader newspaper.

According to The Descendants of William Kellie of Scotland, Depew married Helen Westerfield on May 31, 1923.


Robert E. Dickson, Assistant Sunday editor of the St. Paul Pioneer Press, has transcribed his experiences with a new son into a daily humorous narrative, The Diary of a New Father. The feature, illustrated by Walt DePew, will be released early in September by the Des Moines Register and Tribune Syndicate.

According to American Newspaper Comics (2012), Ned Brant was drawn by Depew, written by football coach, Bob Zuppke, and distributed by the Des Moines Register and Tribune Syndicate. The strip debuted October 21, 1929. The Sunday Ned Brant included two topper features, Off the Campus and Baseball by Ned Brant, and all debuted January 27. Off the Campus was replaced by They’re Still Talking. The Baseball by Ned Brant series gave way to explanations of other sports, like football, basketball, etc. 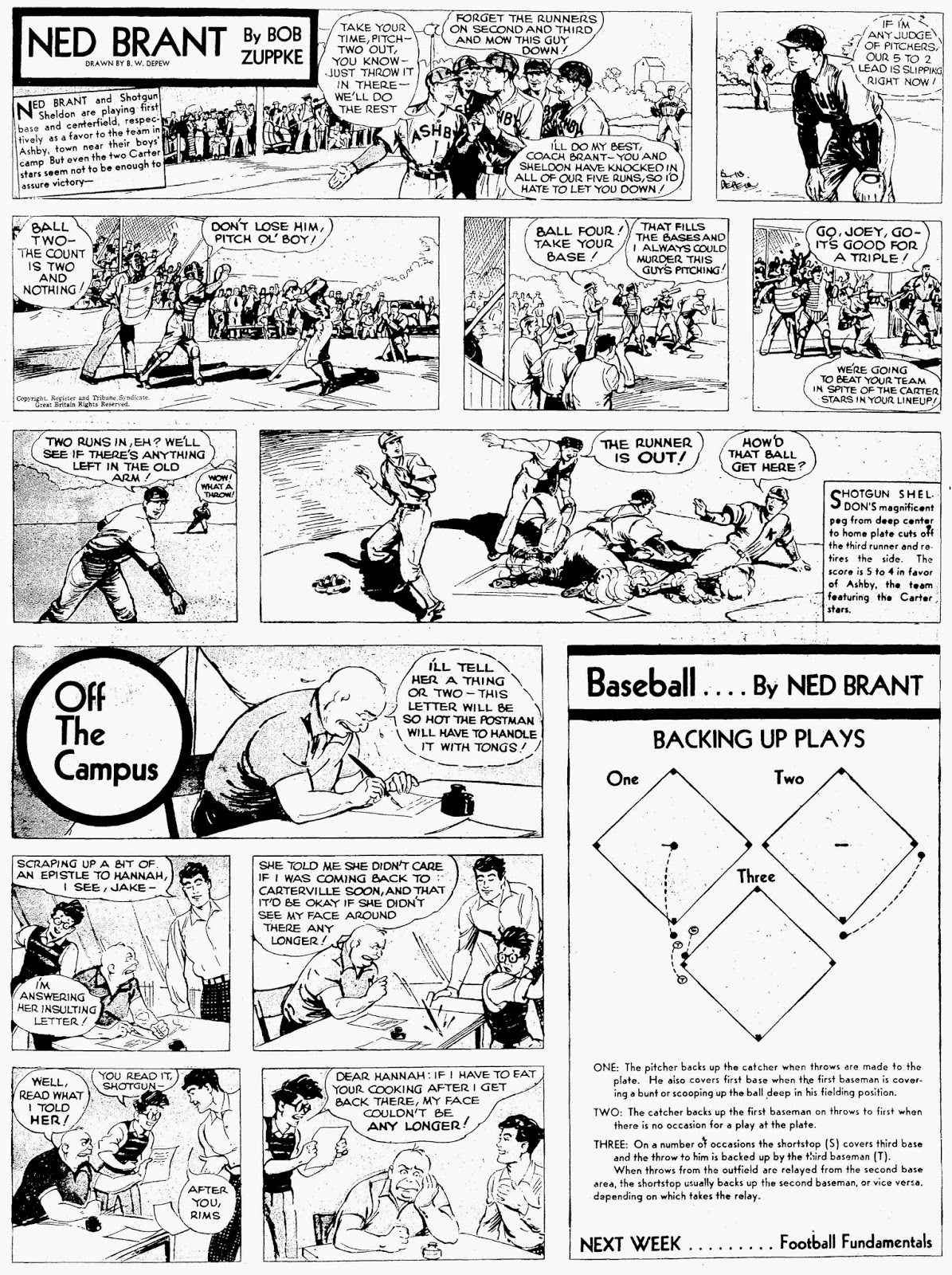 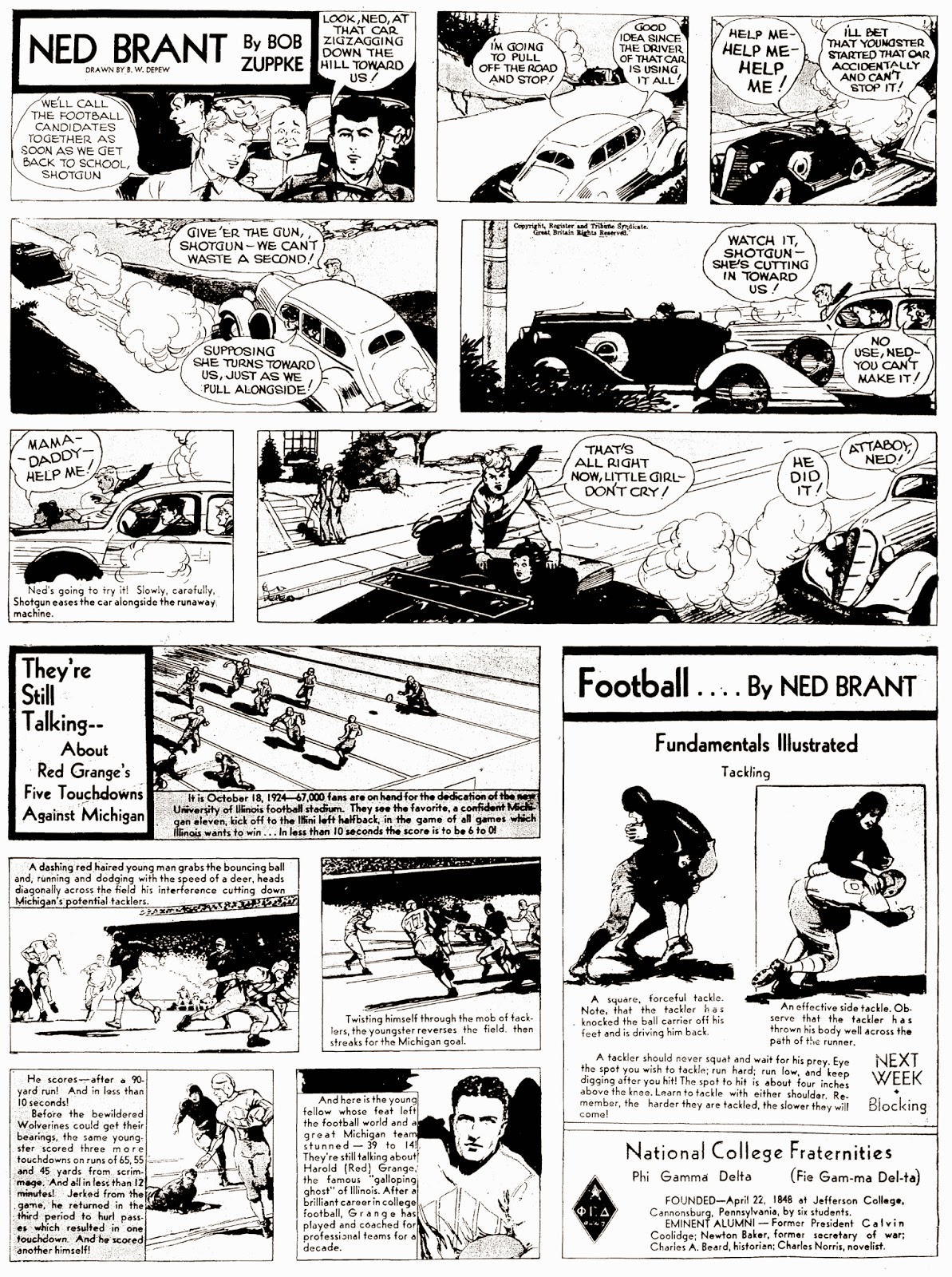 The 1930 census said newspaper artist Depew remained in Des Moines at a different address, 1801 West 38th Street. A second son, Robert, was part of the family.

Depew remained at the same address and profession in the 1940 census. He had four years of high school and did not attend college. In 1939 he worked 52 weeks and earned $3,300.

Depew passed away August 21, 1986, in Des Moines, according to the Social Security Death Index and his veteran’s death file. He was buried in Glendale Cemetery.

Comments:
This is a wonderful tribute to my grandfather. Thank you. 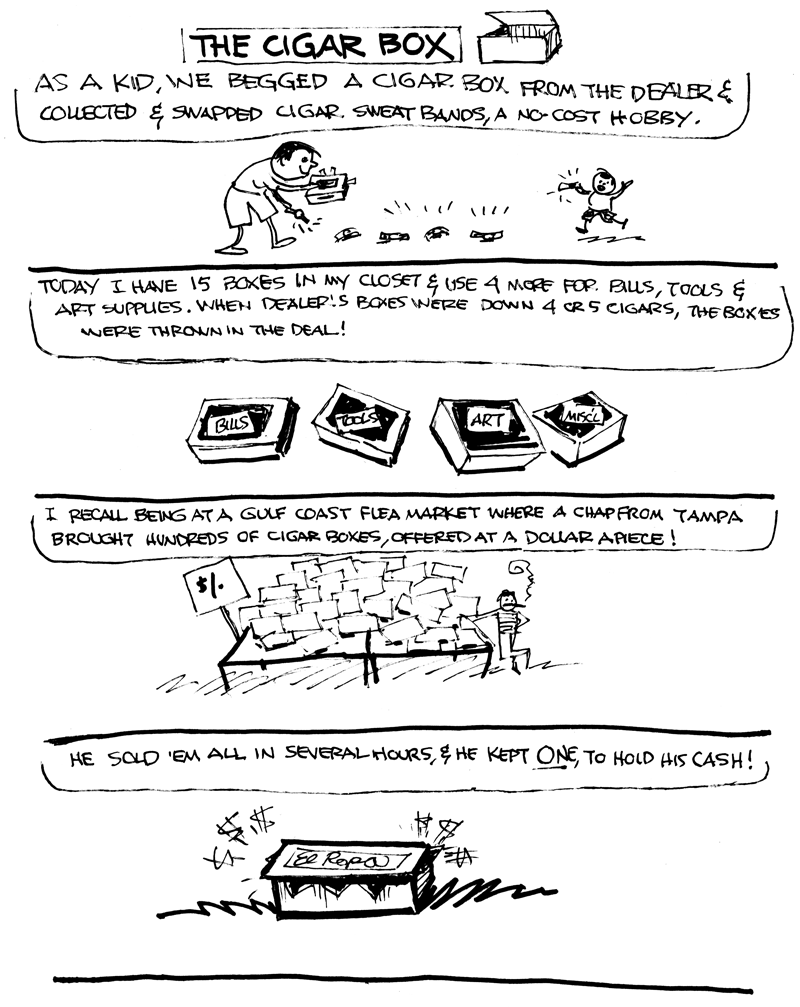 Comments:
I have a cigar box that my grandfather/grandmother used to keep photos in. It still has the same photos... alas no cigars.