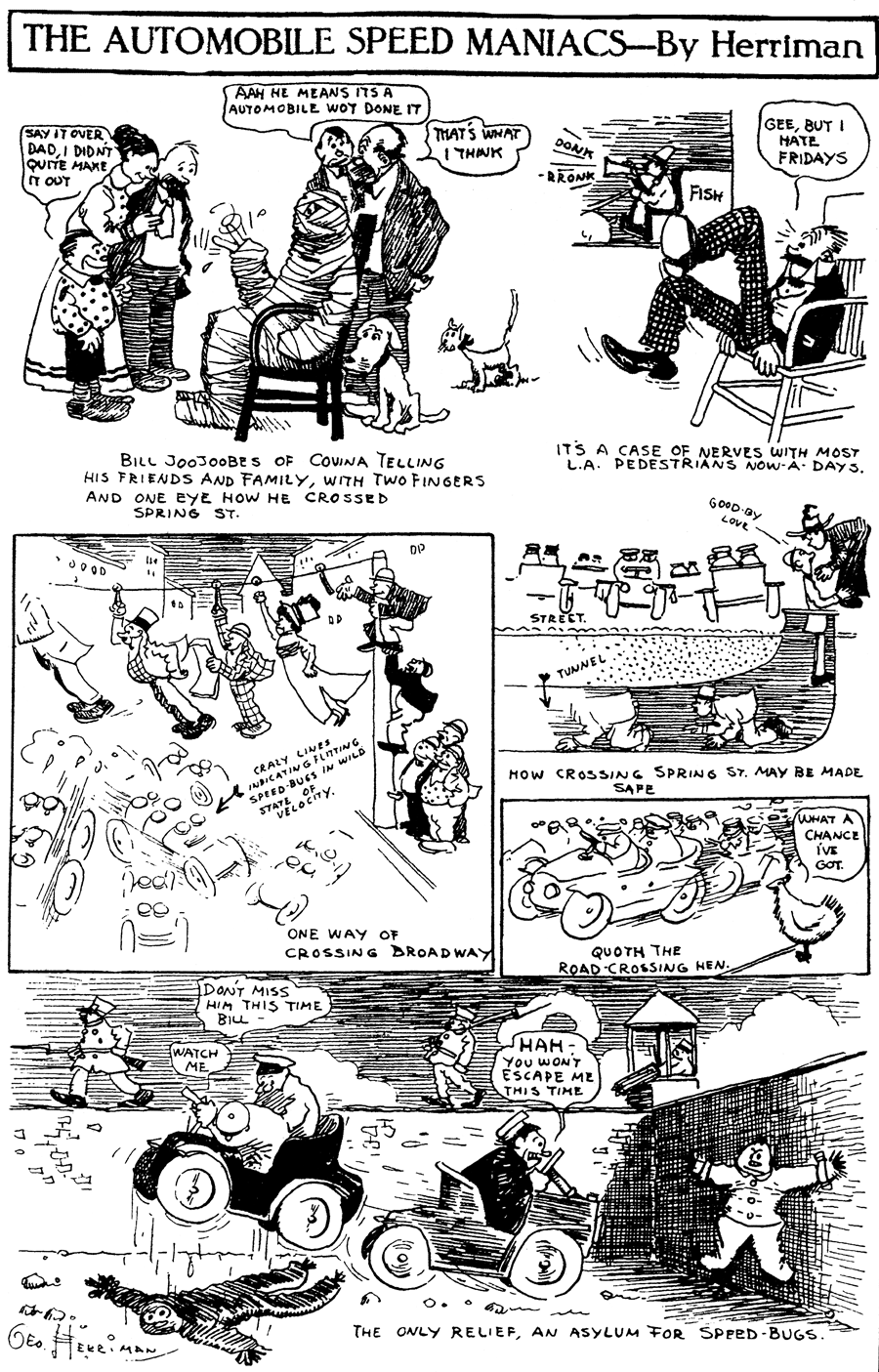 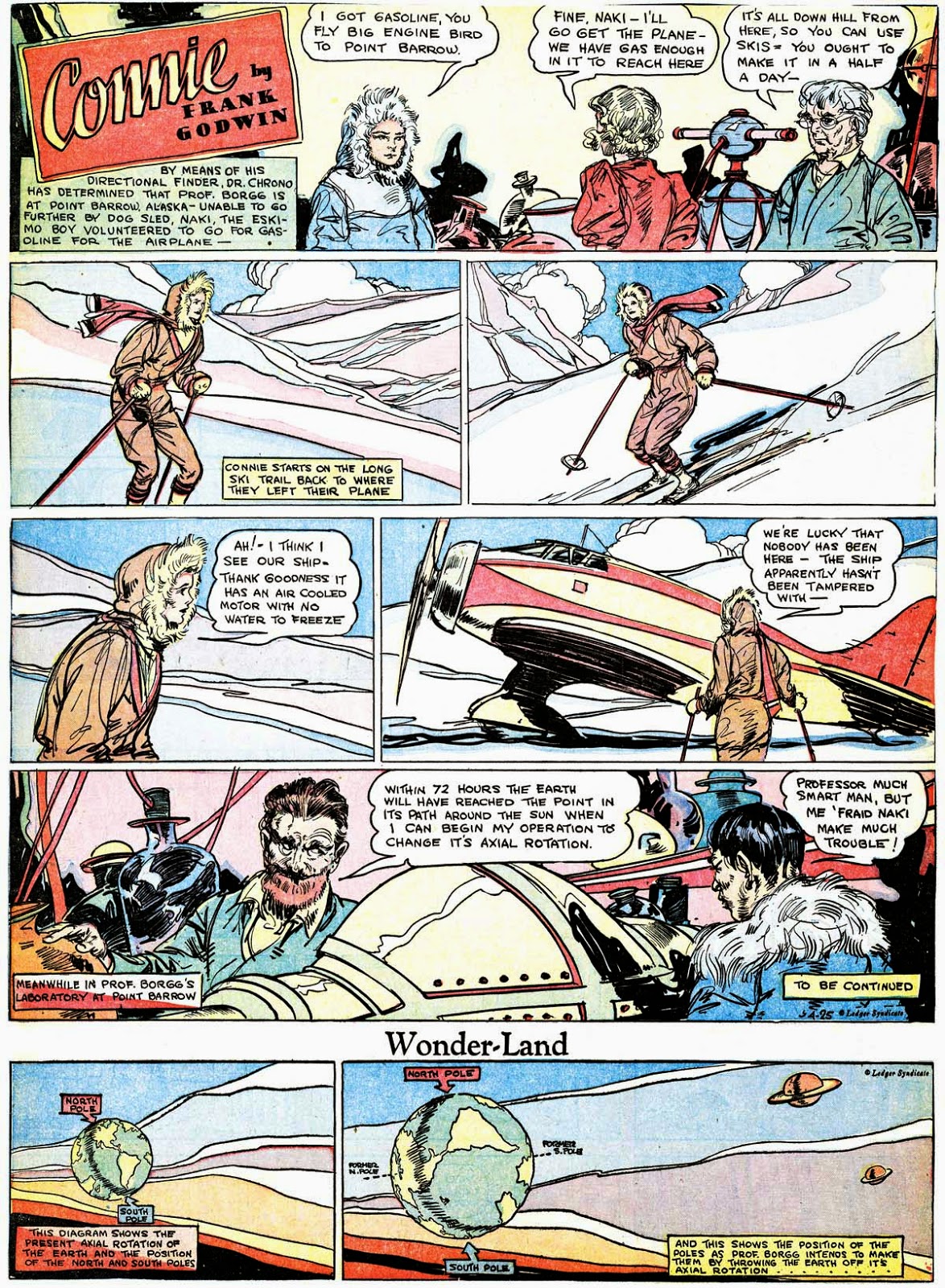 Comments:
Hey! I want my money back! This is the same page you posted last week!

Oops! See your Paypal account for the refund, Katherine.

Obscurity of the Day: 'Scuse Me, Mr. Johnson 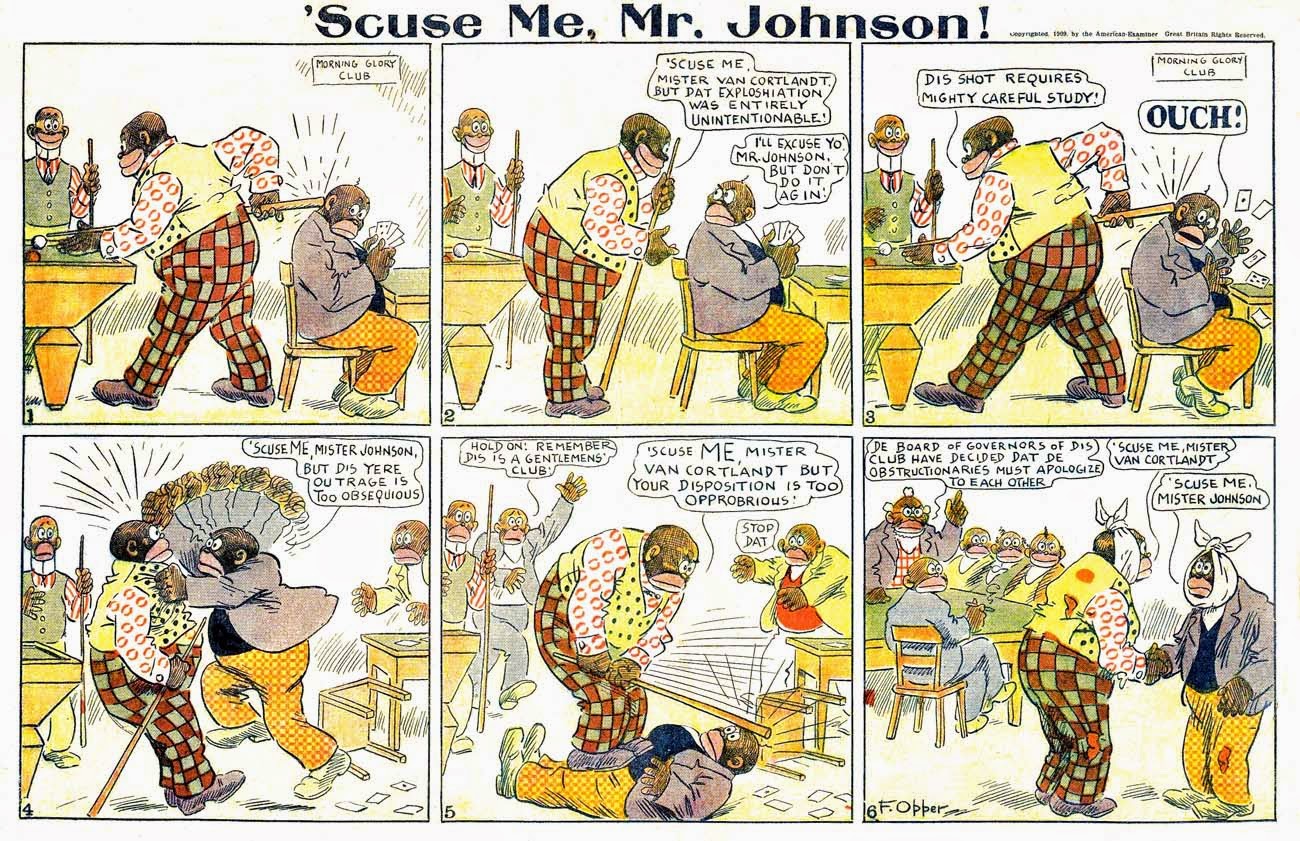 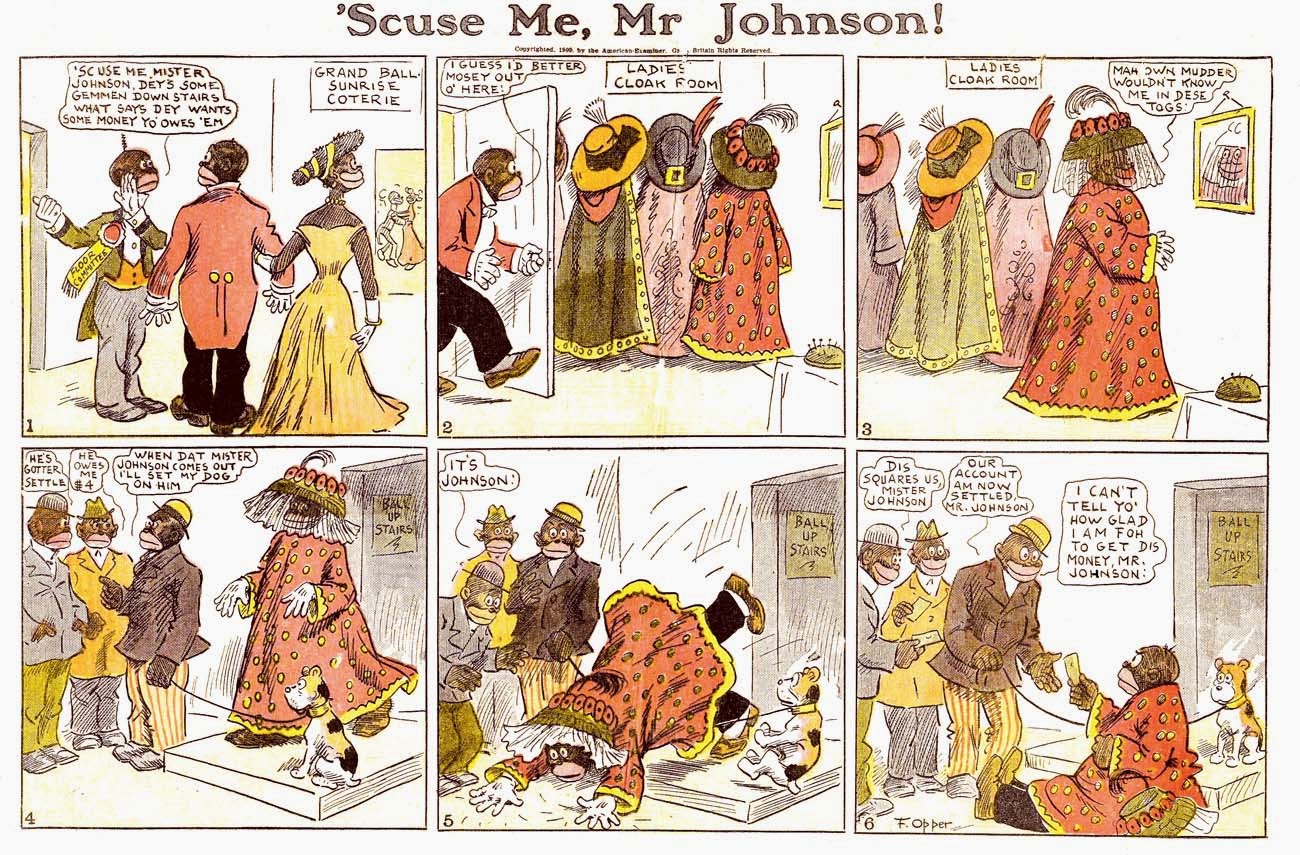 In the more than capable comedic hands of Fred Opper, even racial stereotyping can offer some sheepish grins. Though the strips are embarrassing, the gags and characters are, I have to admit, undeniably funny. So if the visual depictions are too much for you, just pretend the characters are dumb white crackers with deep tans.

In the short-lived series 'Scuse Me Mr. Johnson we meet a community of gentlemen who fight incessantly, steal each other blind, have mile-wide egos,  and lovingly mangle the English language. In short, a delightful bunch who reliably offer up funny situations and the lively patter to go along with it. Why Opper put this series to rest so quickly (it ran January 3 - April 18 1909 in Hearst funnies sections) I don't understand -- I very much doubt that it was because he had second thoughts about his depictions of African-Americans.

Regarding the title, I have always been under the impression that the phrase "Excuse me Mr. Johnson" is the gag line to a popular joke of the day. Something like this -- a white guy is sitting in a bar making bold statements about the inferiority of the black man, and claiming that they are weak in mind and body, etc etc. When confronted by a listener about the great boxer Jack Johnson, the guy redoubles his derision, saying that Johnson is way over-rated, that he could never hope to beat a white man, he's really a sissy, etc. So it turns out that the boxer is actually sitting at the next table in the bar. Overhearing the white guy, he turns around and says, "Excuse me, sir. I'm Jack Johnson." The white guy turns around, sees who it is, and says, dripping with sweetness and deference, "Oh no, excuse ME Mr. Johnson!" Rimshot.

So that's where I think the phrase started. But I'll be darned if I can find any independent confirmation of that on the web. Anyone?

Obscurity of the Day: Can You Beat That, Sadie? 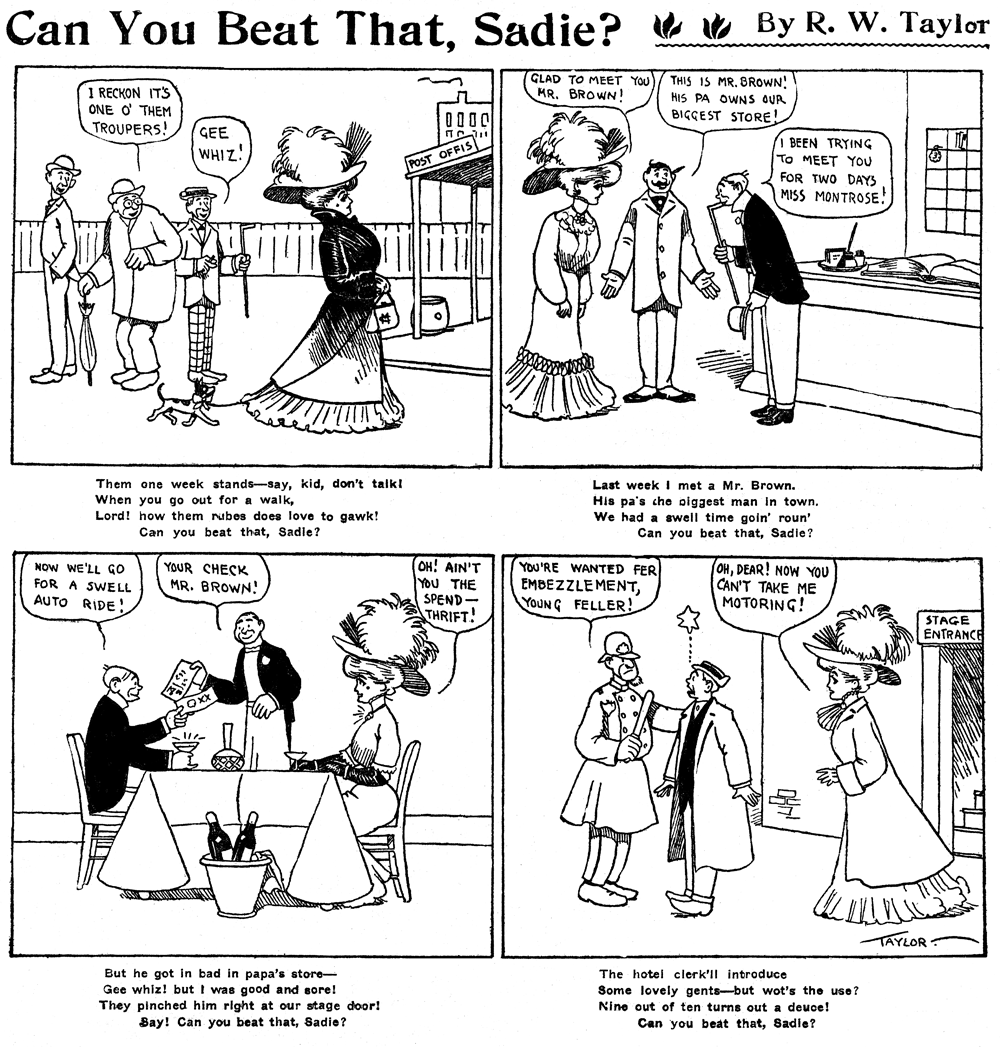 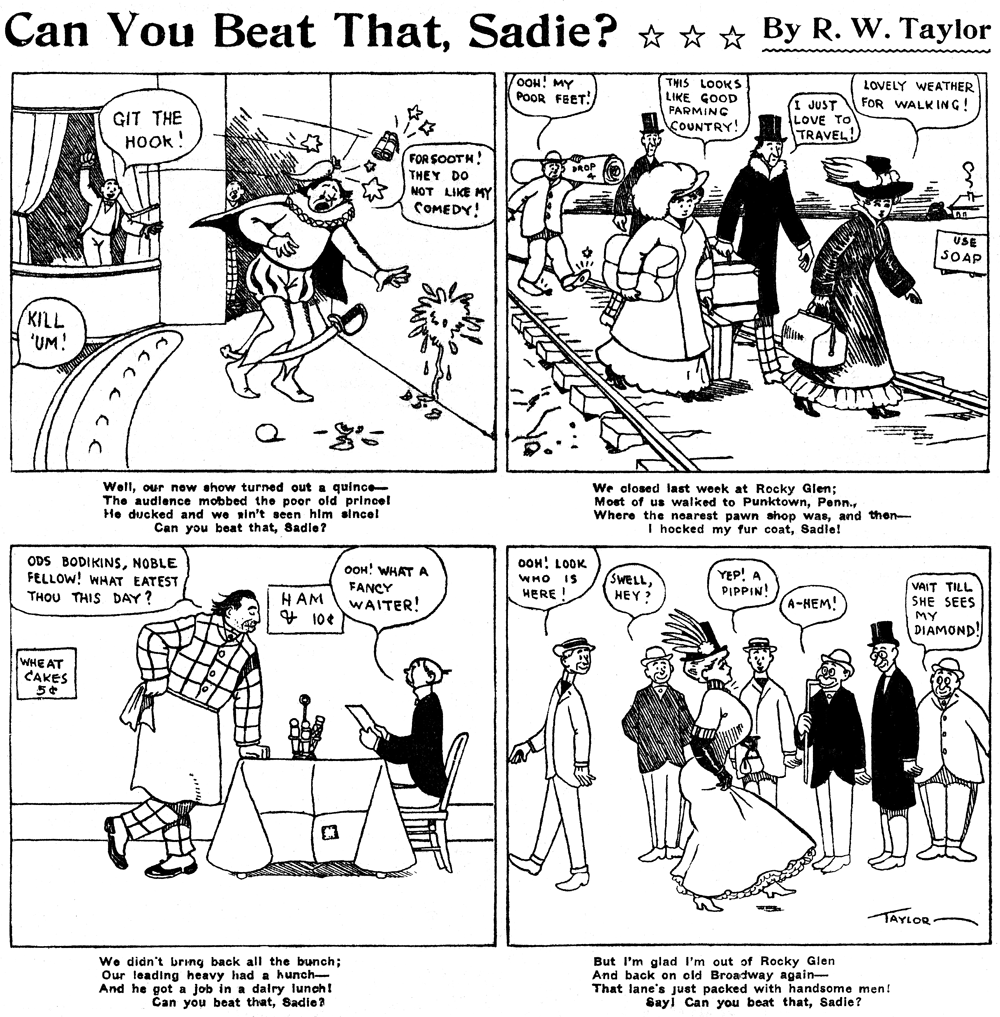 Remember a few months ago when we covered a strip titled Ain't It Awful, Mabel by Roy Taylor? You don't? Oh. Well, here's the link; go read it and come back.

{The Stripper gets a cup of java, reads some emails...}

Okay, so you can see the obvious relationship between that strip and these samples of Can You Beat That, Sadie right? Well, of course you can. It's the same darn strip, with the punchline fiddled with just slightly. Can You Beat That Sadie ran from March 23 to April 24 1908 in the New York Evening World, right on the heels of Ain't It Awful Mabel.

So if you guess that Roy Taylor must have gotten a cease and desist letter, shrugged, and changed the title of his strip but not the subject, well, we're on the same page.

Obscurity of the Day: Pretending Percy 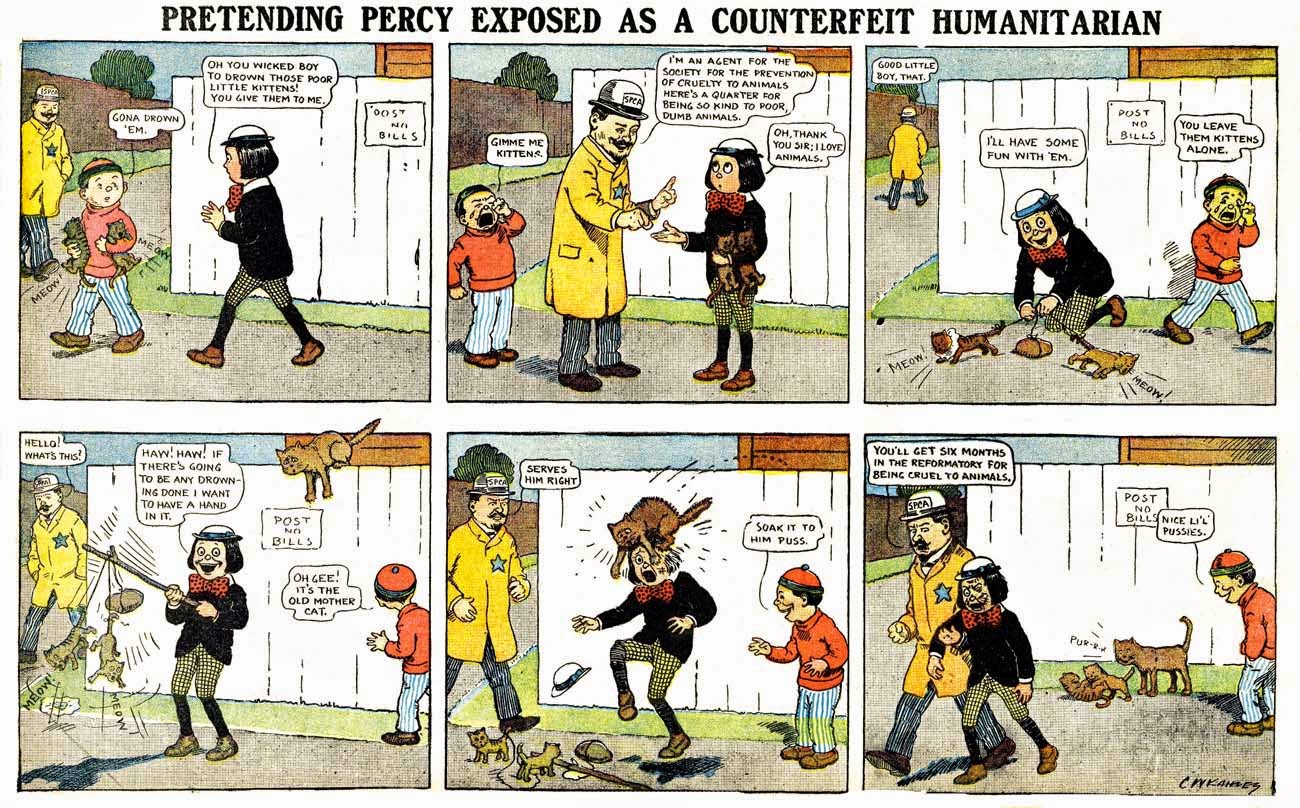 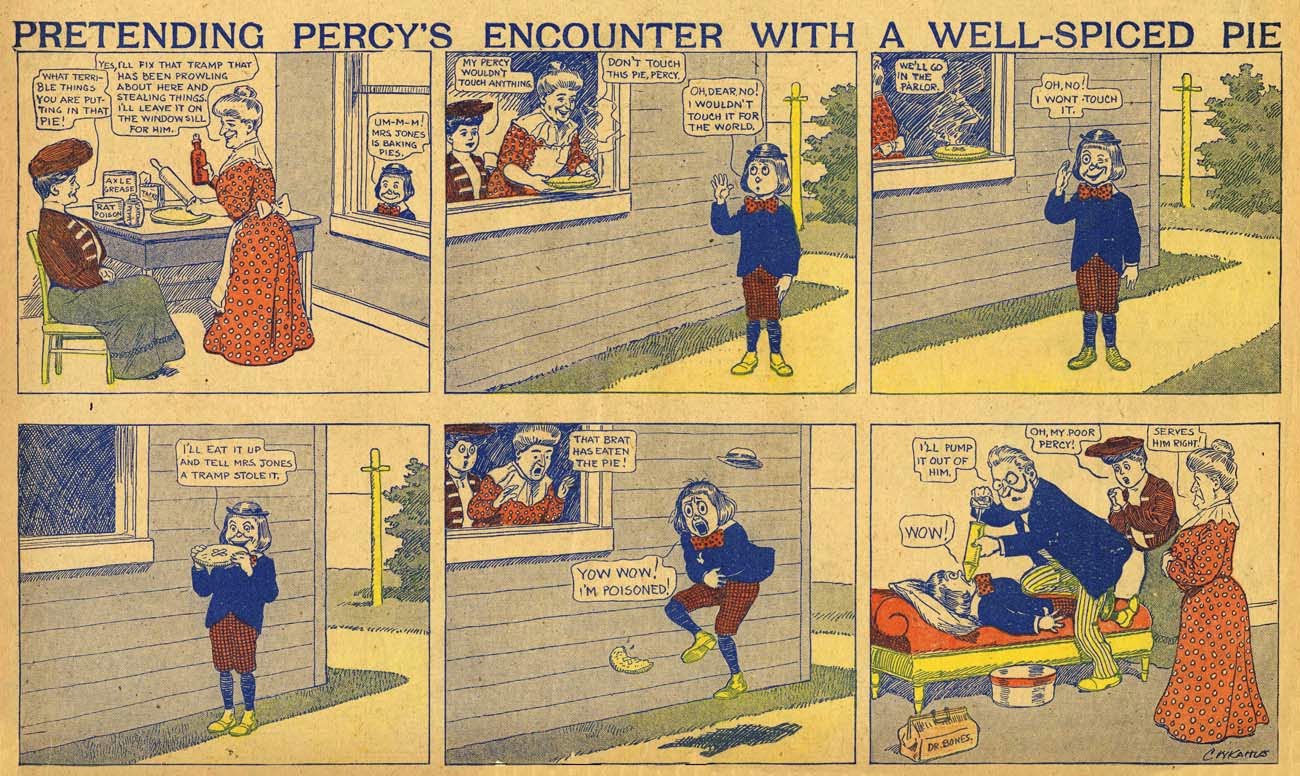 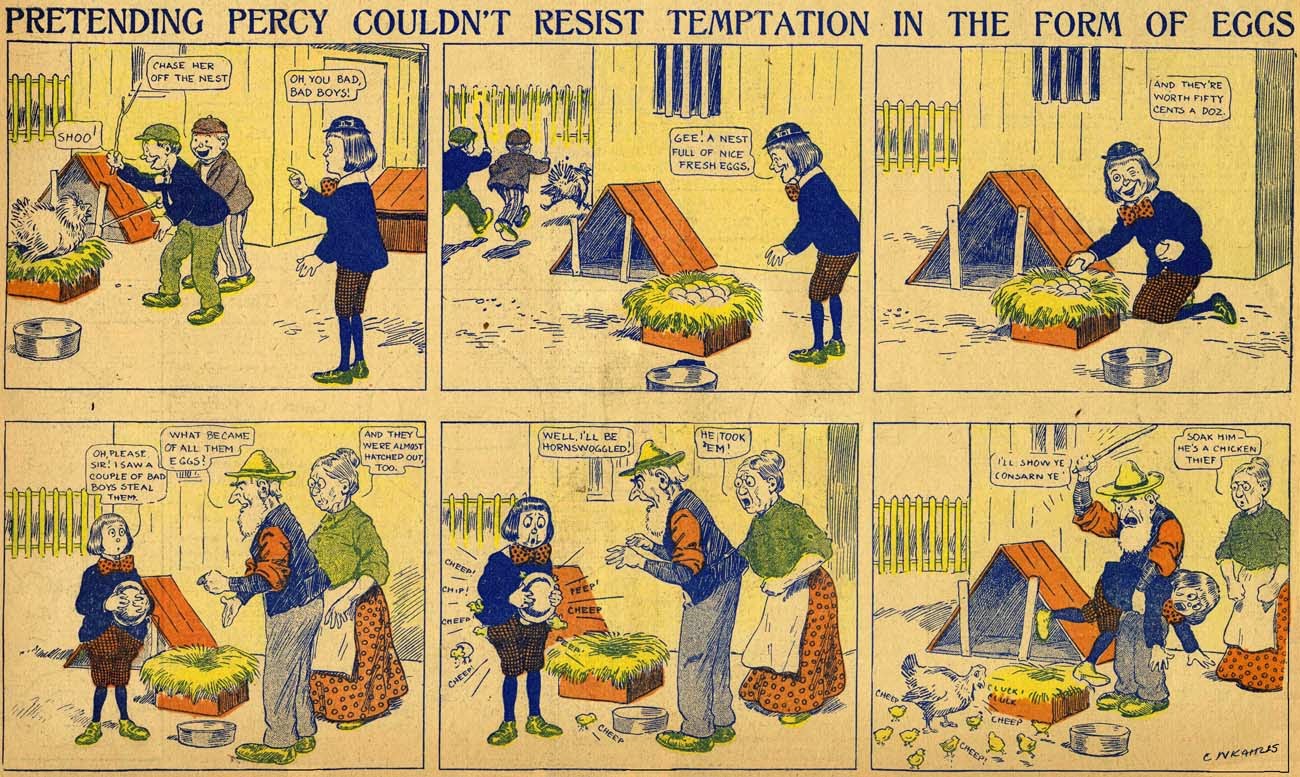 In the considerable legions of comic strip li'l bastards, C.W. Kahles' Pretending Percy doesn't really stick out as an overwhelmingly interesting entry. His schtick of dressing like and pretending to be a good little boy reminds us of Buster Brown, except that Percy never does resolve at the end of his escapades to do better -- Percy is plain and simple rotten, and happy to be that way.

Kahles' art style, as always in this period, is stiff and formal. That works well for this particular strip, as it makes the rather extreme activities seem that much more shocking. Our top sample is particularly stomach-turning, leaving me with the desperate wish to thrash Percy myself. But I guess that's the idea, isn't it?

Kahles contributed Pretending Percy to the Philadelphia North American Sunday comics section from May 1 1904 to July 8 1906. Kahles got a bit confused and called the kid Willie in the second installment, but with as many strips as he did, I guess we can forgive such a slight bookkeeping error.

Comments:
Kahles' HAIRBREADTH HARRY floors me for the writing alone. NEMO reprinted a Sunday page wherein Rudolph uses atomic energy and destroys the world--"Sweet Cookies! This is a FIX!" And that's from one panel, never mind the remaining 11!

"leaping from one plane to another over an erupting volcano became second nature to me"
From the same Nemo.
Outstanding!!!

Too bad Kahles didn't live long enough to write scripts for TV's TJ Hooker. He was a natural 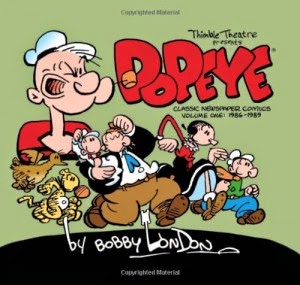 There are some bits of comic strip history to which we fans all bow, but few of us have ever been lucky enough to actually experience firsthand. For instance, the near-legendary science fiction Connie stories from the late 1930s; scarce as all get out in the original tearsheets, and reprint books have barely scratched the surface. Yet we speak of those sequences in hushed tones.

To me, one of the most important of those 'white whale' classics is the stint by Bobby London on Thimble Theatre. Popeye is, of course, a comic strip legend initially set on his course by the genius of E.C. Segar. So strong was the strip and the cast of characters that decades of other cartoonists at the helm did not do irreparable damage to the franchise. What did happen, though, was that Thimble Theatre, at least since the 1970s, was little more than a legal requirement for a set of licensed characters to maintain their copyrights.

Enter Bobby London, underground cartoonist, member of the infamous Air Pirates, National Lampoon and Playboy contributor. His work was not only raunchy and anti-establishment, as one would expect from those credentials, but also clearly lovingly devoted to classic comic strips from the early decades of the century.

When London, amazingly enough, snagged the gig of drawing the daily Popeye strips in 1986, the comics world was simultaneously flabbergasted, intrigued, scared, and skeptical. It seemed like King Features was going out on a very thin limb indeed. Would London behave himself, or would we find Popeye and Olive bumping uglies in our Monday morning paper (those rare few of us who actually still had Thimble Theatre appearing there, I should say).

It turned out that London not only behaved himself (for the most part), but that his love of classic comics made him take this gig seriously. After a short stint of daily gags, London did the seemingly impossible -- he began writing long continuities that played out in increments of two tiny panels per day.

Therefore, I'm thrilled that IDW has seen fit to finally let us judge firsthand. Having just finished volume 1, I can say that I am amazed and impressed. While it is of course impossible to tell Segar-quality stories at the rate of two panels per day, London did give 100% of his considerable genius in adapting the microscopic format to telling surprisingly intriguing, funny stories.

Because it is London, they're not just silly stories, either. They weave in messages about pollution, junk food, war in the Middle East, and other modern issues. Thankfully, Popeye is not stuck in some weirdly behind-the-times world that many comic strip characters are, like Jiggs running around in a top hat in the 1980s.

Do yourself a favor and check out Bobby London's Popeye, if only to be amazed at what London could accomplish in such a tiny space (did I forget to mention that the art is superb, too?). I'm certainly looking forward to Volume 2 of this series, in which we'll presumably get to 1992, and see London meet his unfortunate Waterloo.

Comments:
Since you like volume 1 so much, volume 2 will be even greater when it's come out next month-November 18, to be excat!!!

I recently finished the first volume of Popeye by Segar from 1928-1930 and it is wonderful! I have the other 5 Segar books to look forward to. The daily strips are very good....the Sunday strips are even Better!

I have wondered what the hullabaloo was all about re: London's Popeye from many years later.....What happened to the years inbetween? etc. THANKS for shedding light on this.... I will keep an eye out for the London books.

(Of course, I would also like to see the pre-Popeye Thimble Theatre now. Maybe I'll have to get back to my old newspaper microfilm reading. ) 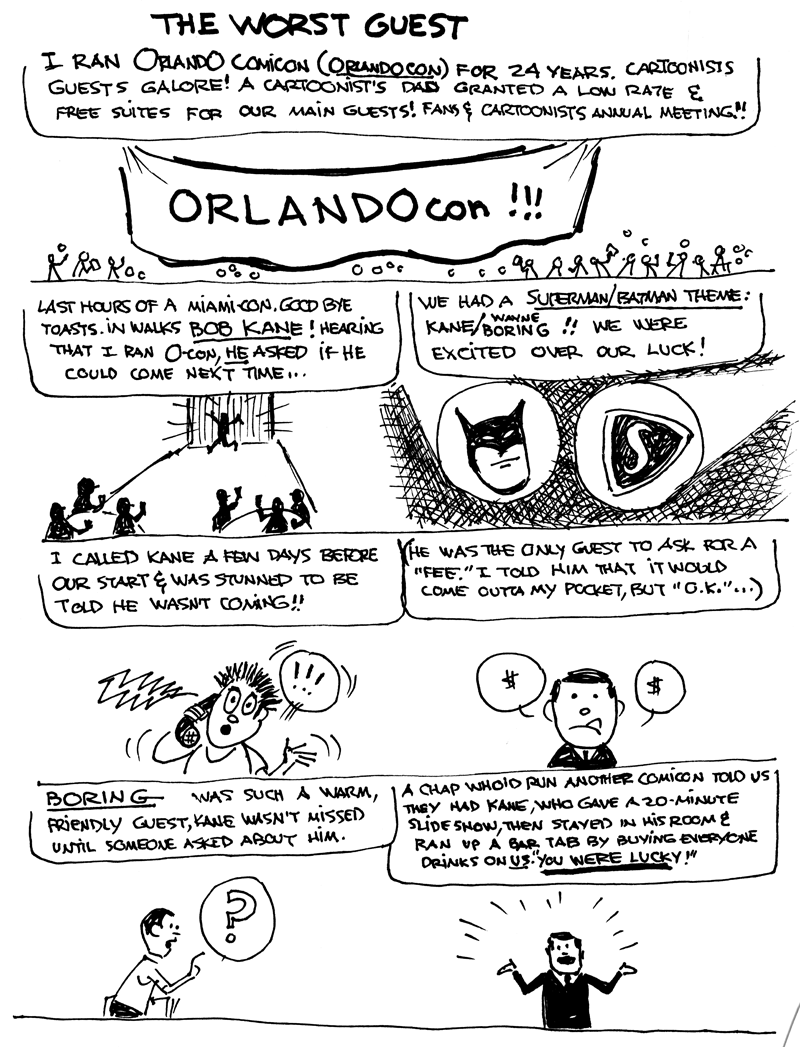 Comments:
Wow! Another unflattering anecdote about Bob Kane! This guy was a true winner!

Sometimes we're lucky by what we don't get.