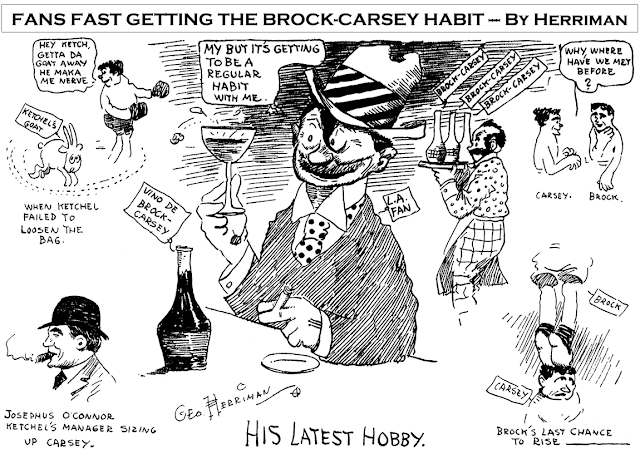 Friday, September 4 1908 -- The big Papke-Ketchel title bout is coming up Monday, but before then there's the regular Friday night bouts at Jeffries' Arena. Frank Carsey going up against Phil Brock is the main event, a pair of lightweights who just faced off back in July. The result's the same in both cases -- Brock will win. 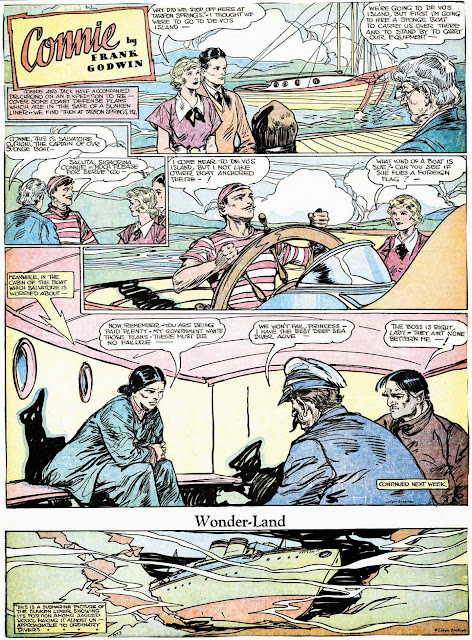 A Cornucopia of Cartoonist Self-Portraits

Alex Jay unearthed this great page from the Literary Digest issue of April 12 1919: 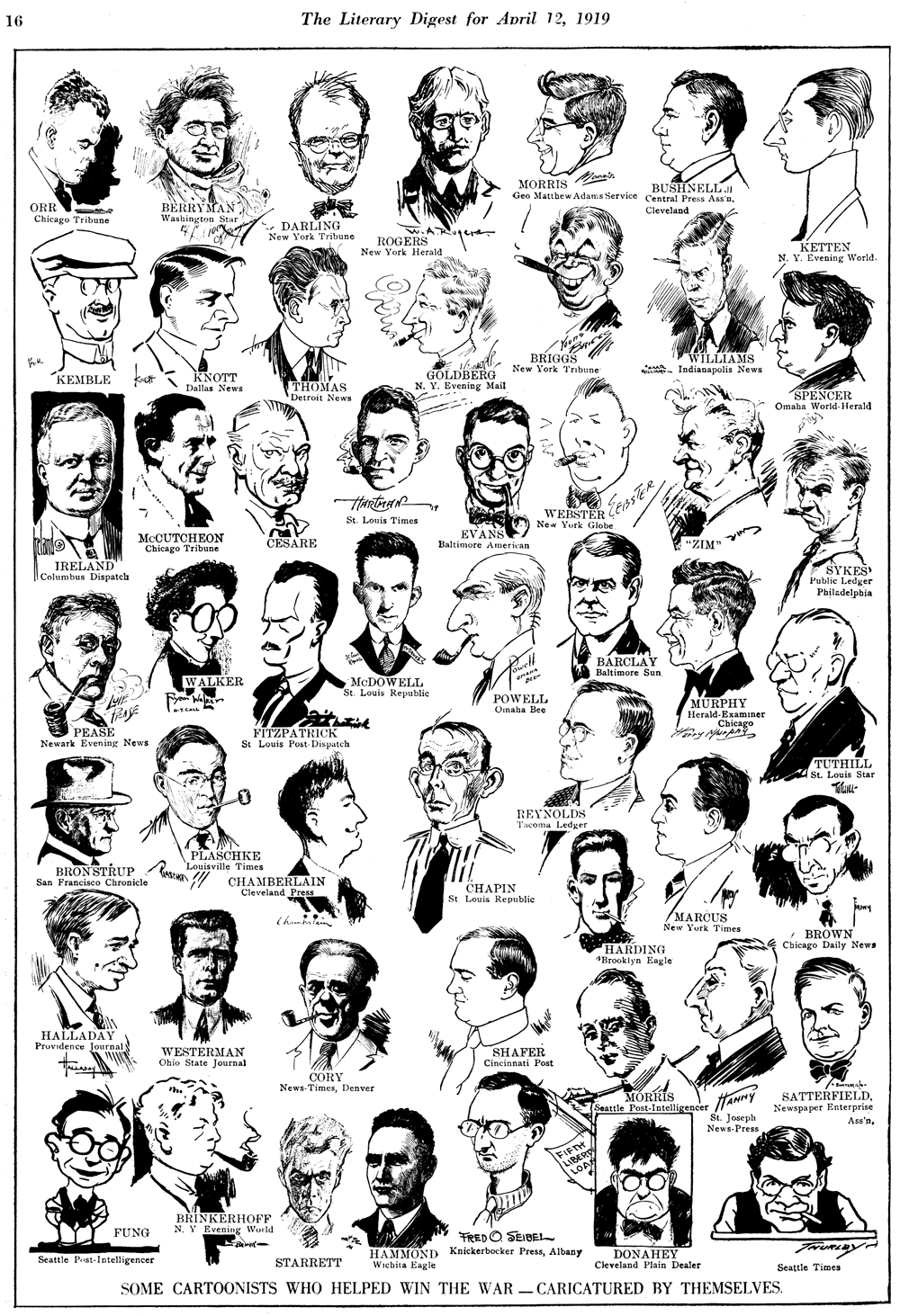 Let me see how many full names I can provide for you -- this is made tougher because my files are all in storage and unavailable at the moment, so I'll depend on memory and the web. Starting at upper left and going across and down:

Great post! One quick correction: the Bronstrup pictured here is actually Gustavo Adolph (G.A.) Bronstrup, who drew for the San Fransisco Call in the turn of the century and later was on the SF Chronicle staff for decades.

This is a really well done collage of the cartoons! I'd like to get one to keep in a mobile self storage pod for a bit and take it out to remember all the different characters!

I have an original picture/cartoon of Teddy Roosevelt by Gustavo A. Bronstrup. It belonged to my grandfather. Is there any information available about the artist or his work?

Obscurity of the Day: Quality Time 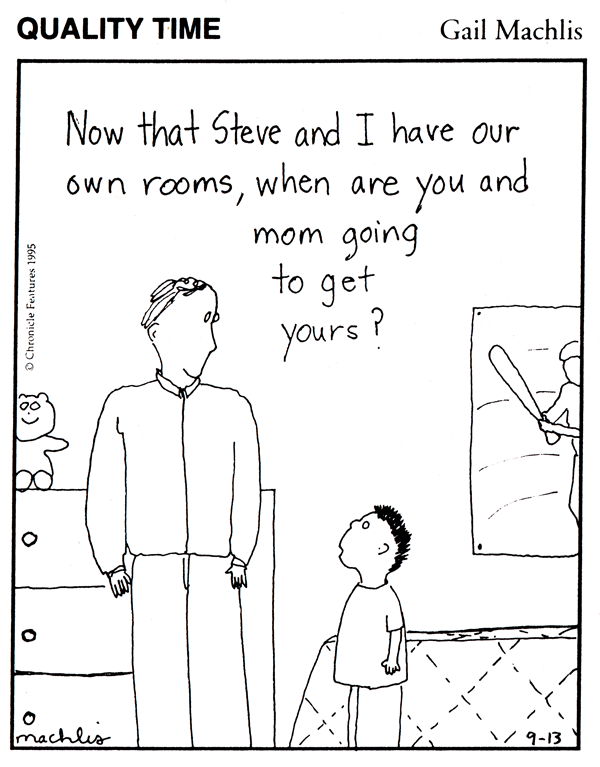 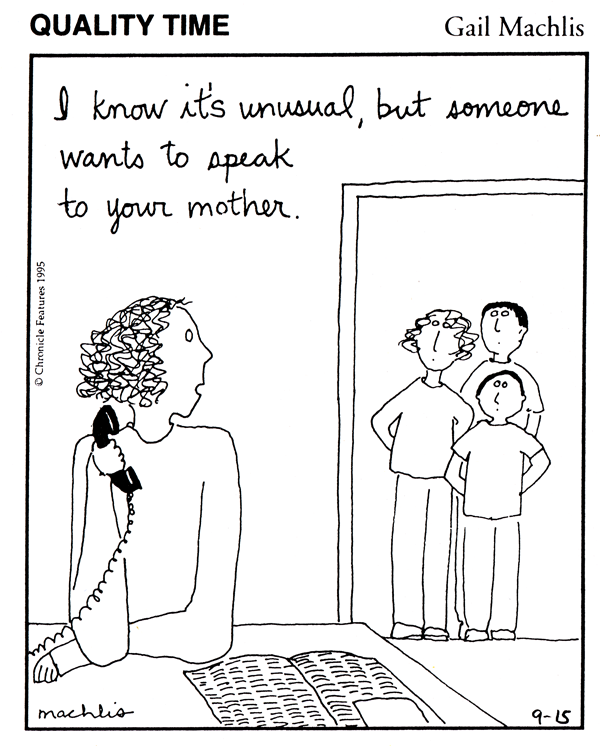 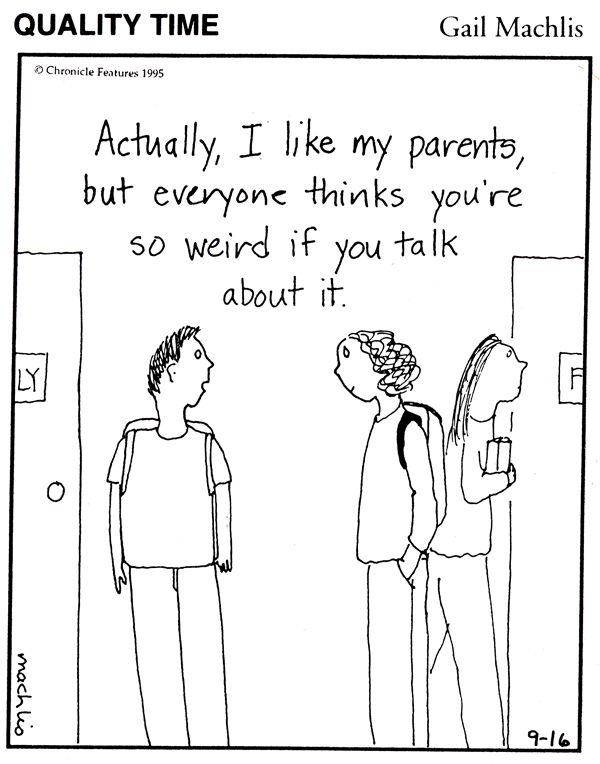 Gail Machlis has a cartooning style that would look right at home in The New Yorker. Which isn't surprising, since that magazine was the goal of her cartooning ambition. However, when her cartoons returned from The New Yorker with rejection slips, she began sending them off to other markets. Machlis is a San Franciscan, so it was fitting that an editor at the San Francisco Chronicle took a shine to them.

In January 1989 Machlis' cartoons began appearing regularly in the Chronicle's Sunday Punch section. Two years later Machlis was offered a regular weekly spot, and she chose the name Quality Time for the feature. After another year and a half, the Chronicle asked if she'd like to enter full syndication. In October 1992 the now daily and Sunday Quality Time debuted, offering papers across the country sophisticated New Yorker-style humor.

The panel did not take off in sales by any means. Was the problem Chronicle Features' lack of marketing effort? Was it that feature editors didn't think their readership would take to the decidedly sophisticated low-key humor? I don't know, but Quality Time didn't sell to many papers, though it did have some high profile major, and well-paying, clients, to soften the blow.

In 1997 Machlis moved the feature from Chronicle Features to Universal Press Syndicate, in what would seem to be a good move. However, Universal didn't seem to be able to lend any new marketing clout, and the series was put out to pasture on August 1 1998.

Comments:
I like it. Of course, I like New Yorker cartoons - was brought up on them, looking at 25 Years of the New Yorker book at a friend of my parents when we visited. 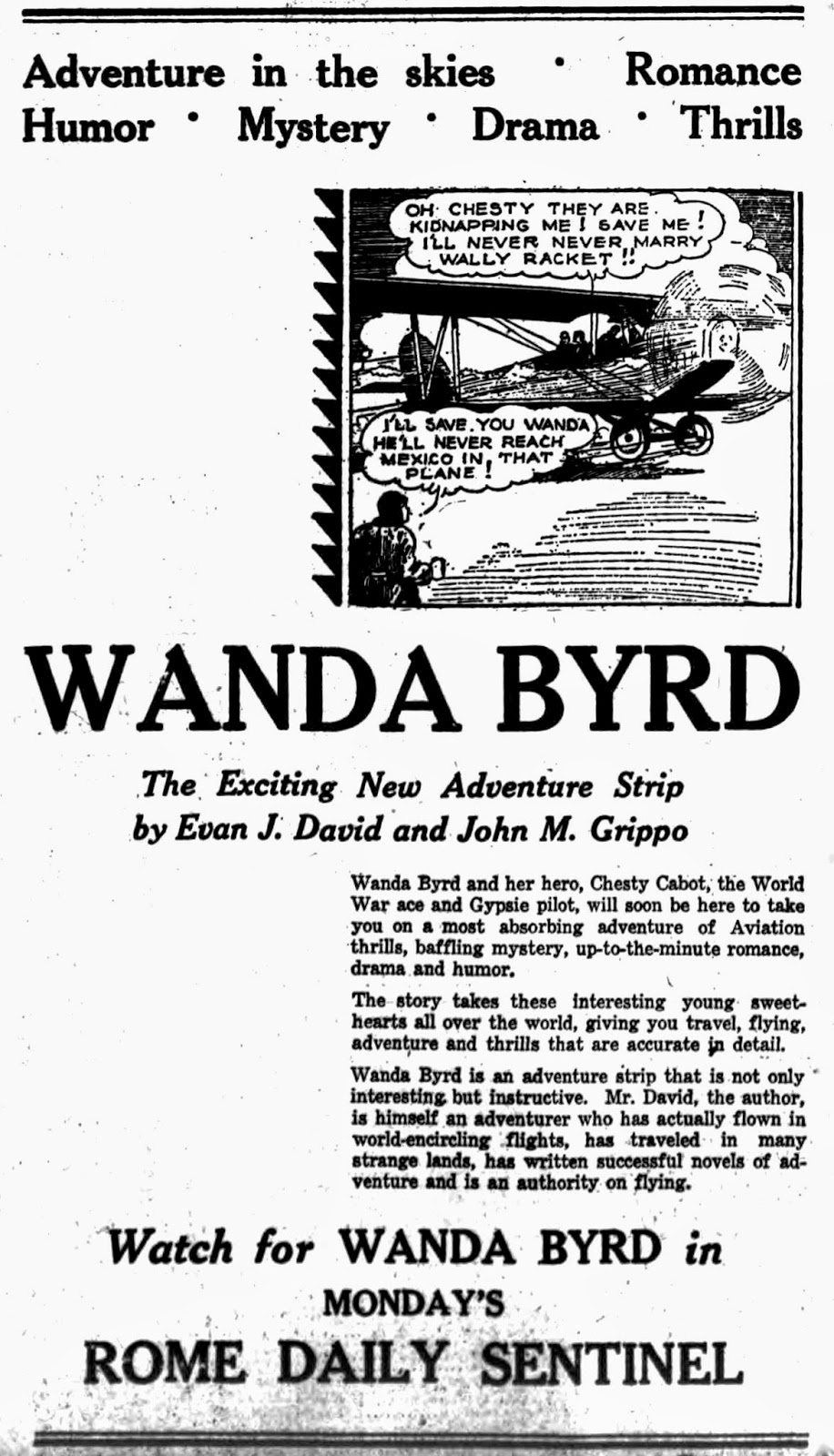 [Comics researcher and sci-fi fanatic Art Lortie offers a guest post today, about obscure aviation strip Wanda Byrd. But he doesn't just write about it -- he offers you a download of the entire run of the strip, which he laboriously gathered from online archives! He has gathered other interesting strips this way as well, so maybe if you give him some encouragement, he might contribute more of his material -- hint, hint. Thanks Art! -- Allan Holtz]

And it might even be complete! Its hard to tell! :)

The good thing about these early strips at Fulton, though difficult to find with that !@#$% search engine of theirs, are of great quality -- and freakin' HUGE! I actually shrunk them slightly to get down to a 4000-pixel width! Plus the Rome papers carried the individual strip chapter titles that I love so much!
Sadly the Rome well went dry on January 24, 1931 and I had to switch to a paltry 1200-pixel width (and no titles!) from the Harrisburg (Pennsylvania) Telegraph at Newspapers.com. I also had to use the Harrisburg paper as a fill-in around New Year's, 1931, when the Rome paper either didn't publish or it wasn't scanned by Fulton-folk.
Other papers I know that carried the strip are the New York Tribune [of course], the Minneapolis Journal and the Los Angeles Times -- none of which I have access to.
There's also some question as to when the strip ended. Harrisburg removed Wanda from their main strip page on May 23, 1931, but -- to their credit -- ran 2 additional strips buried amidst the whiskey and cigar ads on the 25th and 26th just so her faithful readers -- both of them! -- knew our heroes survived yet another fine mess they found themselves in!
But Jeffrey Lindenblatt in American Newspaper Comics says Wanda and her male companion, Chesty Cabot [nowadays that would be HER name!] fought the good fight in the Trib until June 13, 1931, a Saturday, which -- if the 15-day / 13 strip shift in its reported start date is real -- then I might actually have all the strips except 3-4!
All my Byrd strips are at http://www.mediafire.com/download/r3qtr97b0m5mq17/Wanda_Byrd_Rev_2.rar

Its not a great strip by any means, full of racial stereotypes, a plot ripped off from AROUND THE WORLD IN 80 DAYS, and bad art -- but its historically important. Out of curiosity, I decided to find out something about the creators. And that turned out to be more interesting than Wanda and Chesty.
Writer Evan J David turned out to be the real deal. He was a former editor of Flying magazine who had a regular column there keeping the readers abreast of World War I aerial developments. In 1923, when his wife was unexpectedly dying, the combined resources of the civilian and military air forces [such as it was at the time] struggled to get him home in time. He had a later tragedy in the 1930's when he was the driver in a Massachusetts hit and run that killed 2 people, and seems to have gotten off by marrying the only other surviving witness, who then couldn't testify against him.
But he also wrote aviation fiction for many magazines and non-fiction on flight and Arctic exploration for the Saturday Evening Post which saw numerous reprints in Australia, who, according to articles I pulled at the Trove website, was considered the go-to guy for info on the fledging air industry.
The artist, John M Grippo, was a more difficult search -- but only because it was really Jack-of-all trades Jan Grippo hiding under a pseudonym. Yes -- THAT Jan  Grippo :)
Jan / John was born December 15, 1906 in Beacon, NY, and parlayed his training at the New York School of Design into an early career as a cartoonist for the New York Herald-Tribune Syndicate. He also worked on a strip called either Judy Gallant or Captain Smith - Space Adventurer that I've been unable to find under any rock. If it is indeed called Space Adventurer, you can rest assured I'll be bribing librarians from coast to coast to find it!
In 1937 he took Horace Greeley's advice and went west, to Hollywood, where between gigs as a stage musician [he taught Veronica Lake to do the card tricks in This Gun for Hire], he worked as an agent, with Billy Conn, the world light-heavyweight champion, and Leo Gorcey and Huntz Hall of the Dead End Kids as his main meal tickets.
The Dead End Kids were hard-core street punks in the films Dead End and Angels With Dirty Faces, but Grippo decided they'd have more commercial success as comedic good-hearted kids who get into trouble. So he formed Jan Grippo Productions, sanitized and renamed the group the Bowery Boys and produced 24 successful films. He died March 12, 1988 at the age of 81.
Enjoy!
Art Lortie, who is now working on the SF Barney Baxter, Tailspin Tommy, the African American space adventurer Neil Knight, the totally bizarre Peter Pat and a couple of my "SF in All the Wrong Places" entries, before returning (finally) to Brick Bradford.

Comments:
A couple of corrections!
The revised Wanda file [Rev 1] is at https://www.mediafire.com/?027on977aab54bn;
Jon Ingersoll tells me the LA Times did not carry Wanda; and
Fortunato Latella sez CONNIE learned to fly in the first week of her daily strip (start date: March 11, 1929).
Oops. Murphy is alive and well and has rented space in my laptop. -- Art Lortie 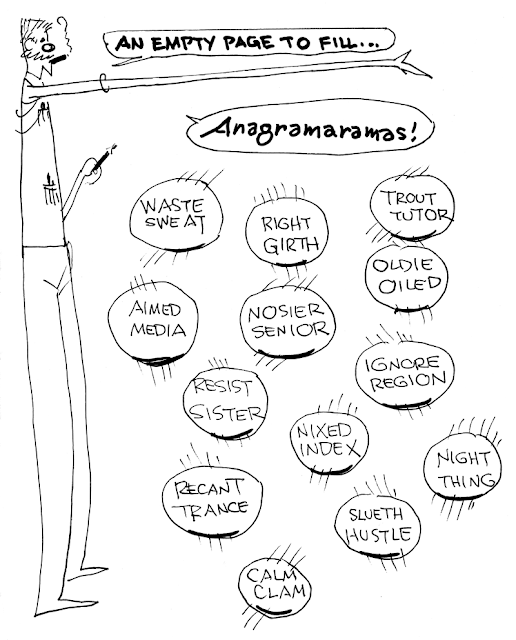 Comments:
I have a Teddy Roosevelt cartoon from Gustavo A. Bronstrup that belonged to my grandfather. Is there any information available?