Obscurity of the Day: Teen-Wise 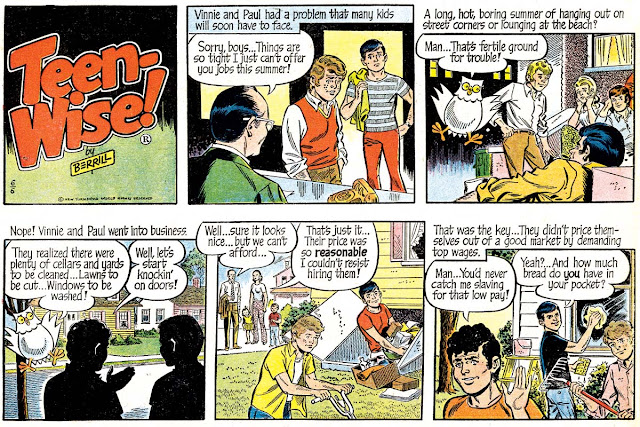 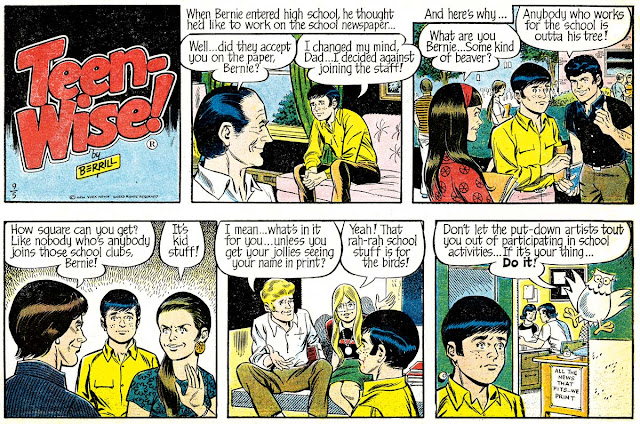 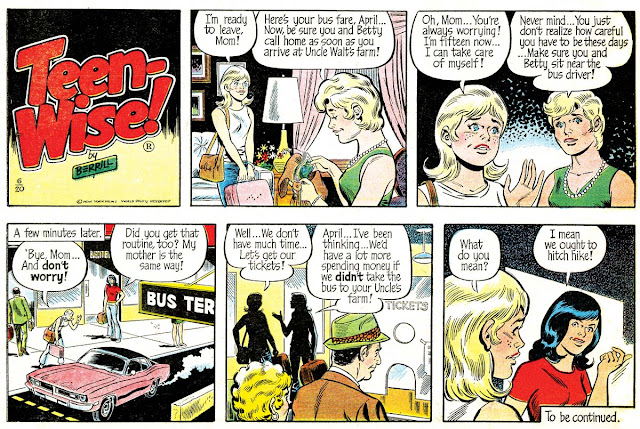 Certainly Jack Berrill had his heart in the right place when he dreamt up the comic strip Teen-Wise for the New York Daily News' Sunday comics section. His idea was to educate kids to the ways of the world, teach them moral lessons and good citizenship, and warn them away from dangers. But I have to say that the way it was done, by presenting readers with a never-ending cast of losers, most of whom never actually learn their lessons, was in my humble opinion really freaking depressing.

Just look at the samples above. In the top one we actually have an uplifting story, one with a great message and a good outcome. But in an otherwise good strip, Berrill has to have a loser invade the last panel and almost get the last word.

In the second strip it is abundantly clear that Bernie is embarking on a long horrible life of quiet sniveling desperation, and that his 'friends' are probably all going to end up as worthless trash; thieves and junkies probably. Could we not have ended with Bernie summoning up the resolve to ignore the advice of his loser friends? Is it realistic? Well, no. We all know some Bernies, and the one thing we can count on is that they'll never strike out on their own. But c'mon Jack Berrill, this is fiction -- you could give Bernie the break he'll never get in real life.

Then there's the third sample, a real classic. I don't have the next week's strip, thank goodness, but please Jack, please, cut these teenage pinheads some slack and don't leave them laying defiled and bleeding in a roadside ditch. Sure, that's what's likely to happen in real life, but please ...

Berrill tried to lighten things up with a mascot. Sorry, didn't work. The Teen-Wise Owl (seen in the top two samples), looked for all the world like a bug-eyed flattened piece of roadkill. It was like an angel of depression hovering over the proceedings, always around to taunt the weekly loser, but always sadly ignored.

Teen-Wise, the most effective depressant you can get without a prescription, seems to have begun appearing in the New York Sunday News sometime in 1966 (anyone seen it earlier?) and finally told the story of its last hapless loser on October 9 1977.

Comments:
Those word balloons and layouts just scream "Gasoline Alley" to me for some reason.

National Lampoon in the early 70s ran a parody by Michael O'Donoghue, "Poon-Wise," which ended with a most temperamental Michael hammering the owl to death ("Goddamn stupid owl!!")!

guys are probably going to think I'm crazy, but I just bought 17 Teen Wise Sundays off ebay. Used to love this strip, and the era also reminds you of the Room 222 TV series.

I remember this strip. The damned owl would often swan in at the end and crow (see what I did there?), “‘Nuff said!”

To this day, whenever some geezer says that, I thinks of this odd strip.

Well, not for nothing, I was in the generation he was talking to and read it every Sunday during the '70's.

Unlike Room 222, or any of the crap on TV, Berrill wrote the truth, man. And it's because he didn't have a sniveling 'happy ending' a la Happy Days in the strip it had a huge impact.

As a snot nosed 15 year old I got a lot from those strips: you should have seen his 'Teen Parents' series.

Well written, great artwork, and he made his point. In what, six panels? Week in and out? Guy had more talent than the crappy TV shows you referred to.

I loved this strip. It was fun and made you think. Too bad it wasn't continued. Let me know where I can get reprints.

Great strip. Where can I get reprints?