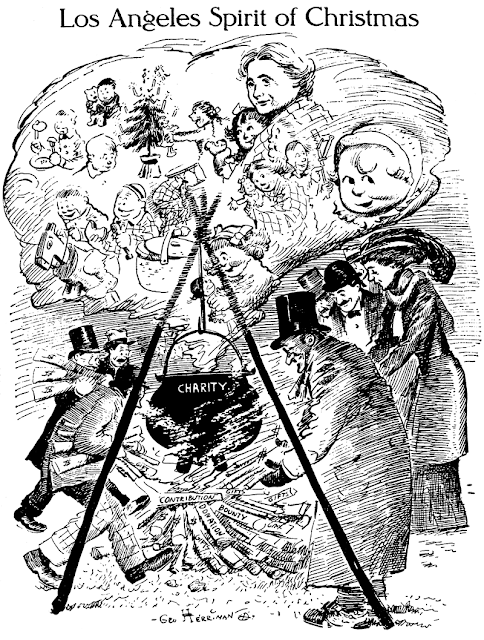 December 24, 1908 -- Another Herriman Christmas cartoon, and how nice for us to reach these cartoons when we're in the same season!

Comments:
And a merry Christmas to you too!
Keep spoiling us. 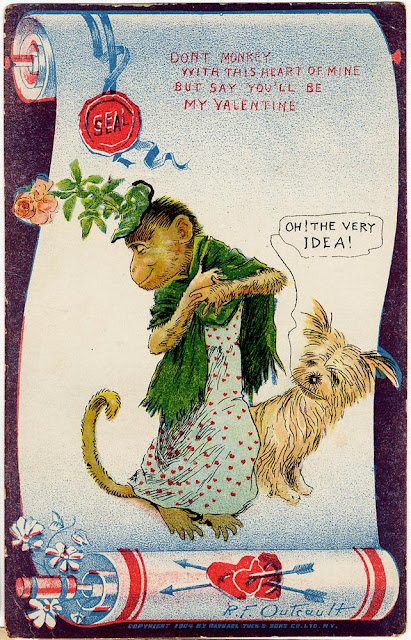 Here's another Outcault card, this one sporting a delightful drawing and issued in 1904 by Tuck. The completely blank back on this one may indicate that it was truly intended as a Valentine's Day card, rather than a postcard as such.

Comments:
Allan and Alex, I hope you might have some answers about a long lost TV show that featured Harry Hershfield, Rube Goldberg, Russell Patterson and Otto Soglow. The TV show was MANHATTAN SAFARI aired on WNET on November 28, 1941 and was apparently 10 minutes long. A blog about old TV shows called TV Obscurities is looking from some information.

I thought considering the cast of cartoonists you might know something about the show.

Here is the link to the article http://www.tvobscurities.com/2016/12/tales-of-lost-tv-manhattan-safari/

The Brightest Star, Part One

Well folks, it's that time of year again, when the Stripper's Guide blog runs one of those special newspaper offerings of yesteryear, the Christmas strip. As has been discussed on the blog before, many syndicates back in the good old days would thank their subscribing papers by sending out a Yuletide freebie. These were usually in the form of a comic strip that ran three to four weeks.

NEA offered these strips for a longer period than any other syndicate, but sadly they gave up the practice in 2010. This year on the blog, we're featuring their 1960 Christmas strip offering, The Brightest Star by writer Jay Heavilin and cartoonist Walt Scott.

I have to be honest about The Brightest Star -- this strip is not going to make anyone drop A Christams Carol from their Christmas story top ten list. In fact, this tale was thrown together in such an obvious rush that the title itself ended up having absolutely nothing to do with the story. So maybe try to think of this as a fascinatingly bad curiosity rather than a heartwarming gift from us here at Stripper's Guide. Make a game out of -- see who can spot the most plot inconsistencies and bald swipes from other classic Christmas stories!

The rest of the story will run next week, and the conclusion of the strip will be on Christmas day.

Comments:
Recalling that the bizarre and often sex-obsessed "Pibgorn" started out as a mild holiday special.

I do miss Christmas in Pogo, what with "Deck Us All With Boston Charlie" and Porky's ritual of bringing one summer flower to Pogo's house. Kelly offered various ancient origins of the hymn as part of a book. One variation ended with Pogo and Mam'selle Hepzibah -- cast as medieval characters -- married with cute hybrid children.

"Dennis the Menace" had an odd tradition of running the exact same joke for multiple Christmases: Dennis sitting atop a small mountain of toys, asking his parents "Is this all?" Postwar prosperity in a nutshell. How many years did that go on?

Obscurity of the Day: Oh, Winnie! 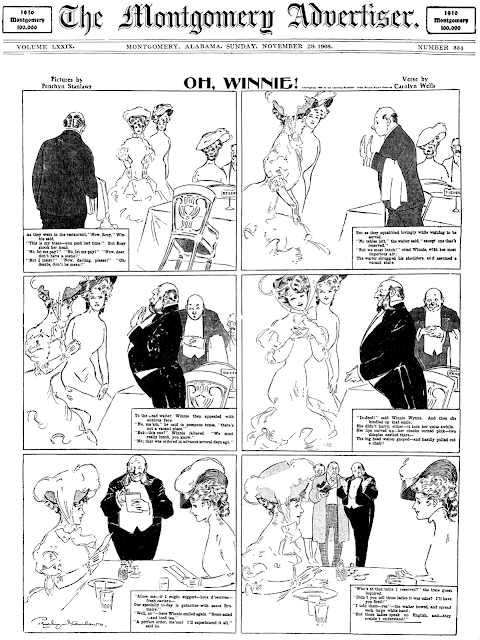 Oh, Winnie! is a very early magazine cover comic strip that was distributed under Hearst's American-Journal-Examiner copyright. The verses were by Carolyn Wells, and the art was by noted illustrator Penrhyn Stanlaws.

The dates reported to me by Dave Strickler, who indexed this title in the New York American, are September 27 1908 to March 28 1909. The weird thing is that if you look for this strip in other papers, you can find this particular installment of November 28 1908 in several papers, but not one single other date of the series. Perhaps Hearst sent this installment out as a freebie to encourage sales of the whole series?

Comments:
Hello Allan-
This series did occur in at least one other paper in the Hearst chain, in the Chicago Sunday Examiner. It was not a magazine cover subject, it was used as the back cover to the editorial section, which at that time had color front and back covers.

Robert Jones Burdette, Jr. was born in Burlington, Iowa, on April 10, 1877, according to his passport, World War I and II draft cards and Social Security application. Who’s Who on the Pacific Coast, 1913, said Burdette’s parents were Robert Jones Burdette and Caroline Spaulding Garrett who married March 4, 1870, in Peoria, Illinois. Caroline died in May 1884. Burdette’s father’s second marriage was to Clara Bradley Baker on March 27, 1898 in Pasadena, California.

The Inquirer, April 16, 1899, noted Burdette’s work in college: “The Junior class of Haverford College gave their annual reception Wednesday evening in Alumni Hall, which was preceded by a play entitled ‘The Old Log Cabin,’ (with anachronisms), written by Robert J. Burdette, Jr., and presented by the class of 1900.”

The 1900 U.S. Federal Census recorded Burdette in Haverford, Pennsylvania where he was a student at Haverford College. Burdette, class of 1900, provided illustrations for the Haverford College Athletic Annual 1898–99 here, here and here. 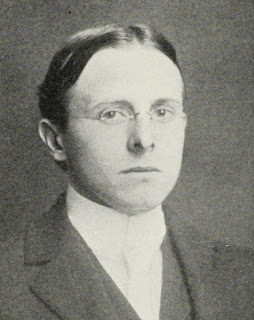 Burdette’s graduation was celebrated with his family. In the book Robert J. Burdette; His Message, his stepmother wrote:


In June, 1900, the older son, Robert J. Burdette, Jr., graduated from Haverford, and the younger son passed his entrance examinations for Harvard at seventeen, with sufficient honors that a year of travel might not be altogether a loss, so we four went abroad for the joy of Mr. Burdette’s first trip to foreign lands, for a post-graduate course for the older son, and a better preparation for college life for the younger son, and my joy in all three and a visit to many old scenes of travel. 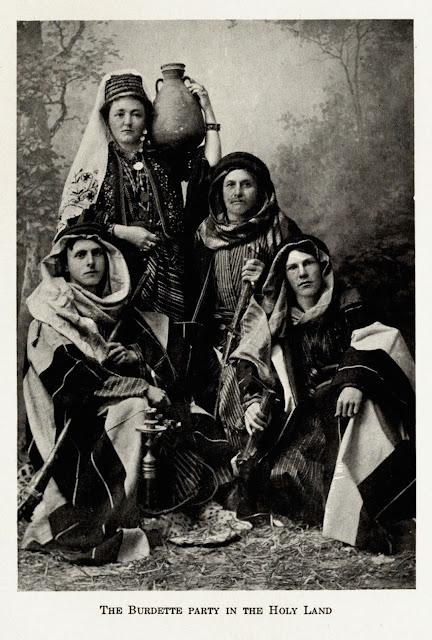 From left to right: Burdette, his stepmother, father, and stepbrother


Robert J. Burdette, jr., son of Robert J. Burdette, the well known newspaper man and humorist, who has been connected with the Philadelphia Bulletin, has been appointed associate editor of the Burlington Hawkeye, the paper with which his father was so prominently identified for many years.

Burdette was counted in the 1905 Iowa state census as a resident of Des Moines.


Robert J. Burdette, Jr., whose father was well known as the “Burlington Hawkeye Man,” is following in the footsteps of his humorous parent.

Mr. Burdette, Jr., who is an only son, had a brief experience in newspaper writing before he entered into the field as a “funny picture maker” with the New York Sunday World. The series he is now drawing is that of a thin individual who thinks he can play ball, and is run under the caption “Lanky Loo.”

His pictures have the endorsement of his father, who is now pastor of the Pasadena (Ca.) Temple, and the active head of one of the most prosperous congregations on the Pacific Coast.

Oklahoma City, Oklahoma was Burdette’s home in the 1910 census. He was a newspaper reporter. After the census enumeration, Burdette married and moved to Salt Lake City, Utah. The 1911 Salt Lake City city directory listed Burdette at 20 Harmony Place. His wife, Felicia Glenn Johnson, gave birth December 7, 1911, to a son, Robert Jones Burdette, who died two days later, according to the death certificate.


Robert J. Burdette, a Salt Lake City newspaper man, is the father of a new son, who has been christened Robert J., III. The baby is a grandson of the famous late “Bob” Burdette, preacher, editor and humorist.

On September 12, 1918, Burdette signed his World War I draft card. He resided at 924 3rd Avenue in Salt Lake City. His occupation was newspaper reporter and stenographer for James P. Carey, Salt Lake Herald. Burdette was described as short, medium build with blue eyes and light hair.

Burdette’s address was the same in the 1920 census. The newspaper stenographer had two children, Caroline, age 7, and Robert, age 4. Later that year Burdette was an advertising writer at the Malcolm McAllister Company as listed in the city directory. The 1921 through 1925 city directories said Burdette was a reporter for the Tribune.

McWilliams, Alabama was Burdette’s home in the 1930 census. He continued as a newspaper reporter and his wife was a magazine writer. Their third child was Charles, age 9.

According to Burdette’s World War II draft card, which he signed April 27, 1942, he resided at 1211 North Western in Oklahoma City. He was employed at Bash Grocery, 1234 North Western.

Burdette passed away September 20, 1952, in Oklahoma. He was laid to rest at Rose Hill Burial Park.

Obscurity of the Day: Lanky Loo 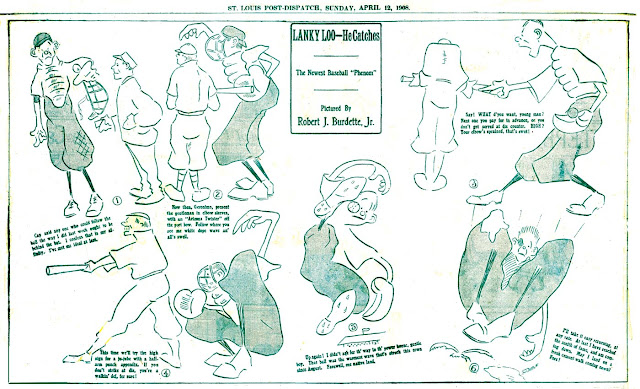 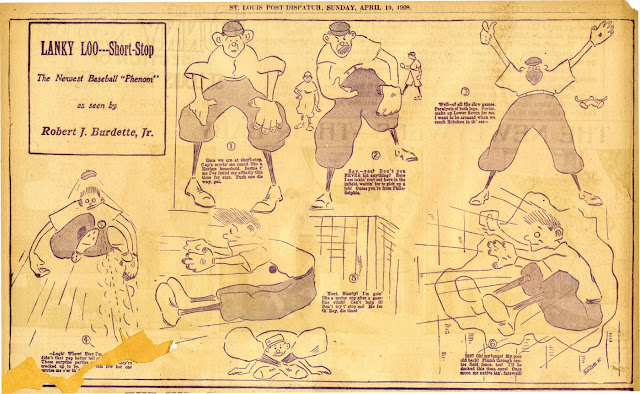 Thanks to Cole Johnson, here we have a Pulitzer series that somehow escaped the notice of Ken Barker when he did his generally authoritative New York World index. For a long time we assumed that Lanky Loo for some reason only appeared in the syndicated version of the Pulitzer Funny Side section, but Alex Jay has found a mention of an upcoming episode in the New York Evening World,which means it did appear in the World itself. Perhaps this is one of the times when the World microfilm had a gap in their Sundays, which Ken used to warn me about. Shame I was never able to get a list of those missing Sundays from him, because the information can now be readily filled in from digital sources of the syndicated section.


Anyhow, this delightful short series about a cocky rookie basebell player coming up to the big leagues is, in my view, a gem. I love the loosy-goosy art, and the prose is so full of great wacky jargon that even Tad Dorgan would have to tip his hat. The series is in five installments (April 5 - May 3 1908) in which Loo tries out at various positions -- pitcher, catcher, shortstop, first base, third base -- and finds out that he has seriously underestimated the level of player he is up against in the majors.

The creator of the series, Robert J. Burdette Jr., was the son of a famed humorist of the late 19th century. Junior became a journalist, contributing to several different newspapers before eventually settling in Salt Lake City. As best I can tell, this series was Junior's only major attempt at newspaper cartooning. What a pity.

Comments:
I Think the files used in the digital file is from the same microfilm. At least that's what I have found for other such files. Usually, the Library of Congress made a microfilm of a title, and many years ago, to boot. After it was made, and if that locality didn't have a file of their paper, the LOC's will be duplicated. Saved a lot of money, but now there's just the one file that will represent it forever.