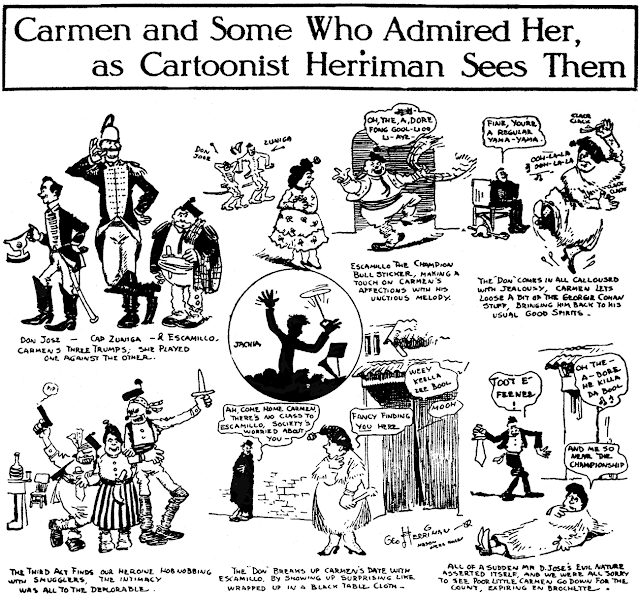 January 3, 1909 -- In his first cartoon of 1909, Herriman endeavors to render assistance to Examiner readers. The story of Carmen, which is playing at the Mason Opera House, is simplified to a series of explanatory cartoons.

Comments:
In case anyone else is wondering, the conductor is labeled Jacchia because he is Italian orchestral director Agide Jacchia. I was also curious as to whether or not the big hair on the cartoon conductor was modeled after the real Jacchia, but it doesn't really look like it. Hard to say, though: https://upload.wikimedia.org/wikipedia/commons/e/ee/Agide_Jacchia_01.pdf. It does look quite a bit like the hair of Jacchia's teacher, Pietro Mascagni: http://biografieonline.it/img/bio/Pietro_Mascagni_1.jpg

Could easily be a coincidence, though.

Wish You Were Here, from Norman Jennett (probably) 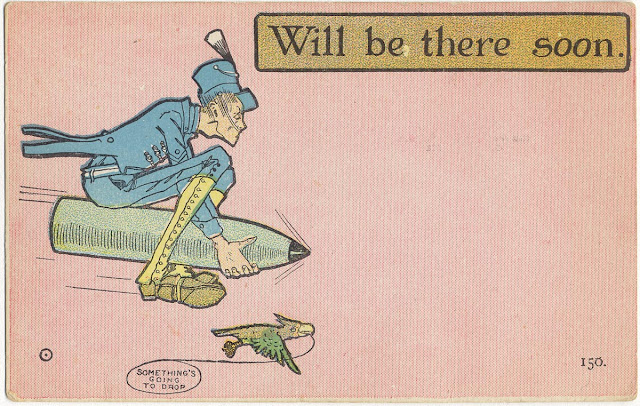 This divided back postcard has no copyright info on the reverse, and just a couple of unhelpful notations on the front. The artist failed to sign this card, but I'm pretty confident that it is Norman Jennett. 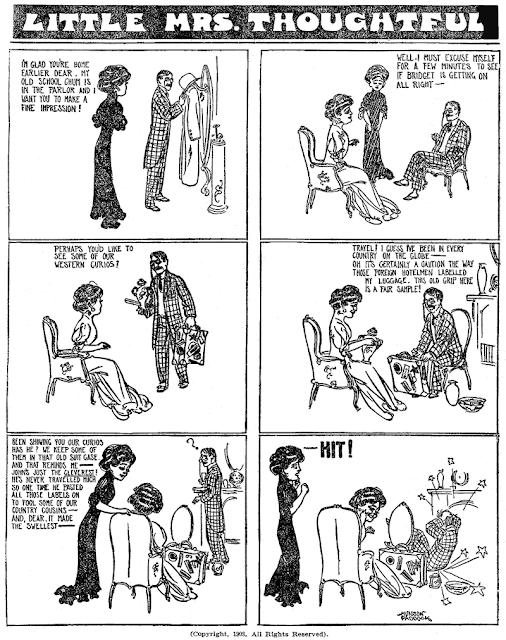 Munson Paddock, whose life story turned out to be a lot more prosaic than his misinformation-based legend, penned the one-note series Little Mrs. Thoughtful for the New York Evening Telegram. It ran on a weekly schedule in the Saturday edition of the Telegram from February 8 to June 6 1908, then took a hiatus, and returned on Wednesdays from September 16 to October 7.

Obscurity of the Day: The Baxter Beasleys 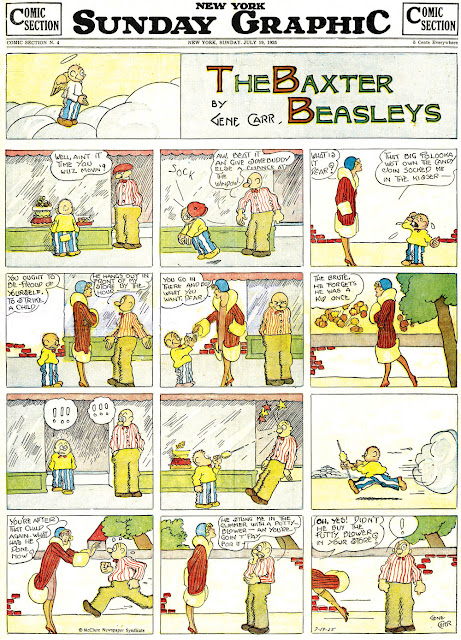 The Baxter Beasleys, by the always competent and often terrific Gene Carr, has a checkered history. It seems to have been produced for the McClure Syndicate while Carr was on some sort of hiatus from his Pulitzer daily feature, Everyday Movies (aka Metropolitan Movies). The daily begins on June 23 1924, and the latest I can find it running is January 31 1925. The daily is very much in the mold of a popular new genre at this time, which doesn't really have a name. In this genre there is a husband always trying out some brainless scheme, and his family, generally smarter than him, tries to save him from himself, or contents themselves with mocking him. Examples are The Bungle Family, The Nebbs, The Gumps, The Man in the Brown Derby, Cicero Sapp, etc. Anyone got a suggestion for what we could call this genre? Anyway, The Baxter Beasleys daily is firmly in this mold, and because it's Gene Carr the strip does a predictably good job of going through the familiar paces.

The Sunday, however, as you can see above, is a pretty nondescript piece of fluff. What is interesting about it is that it is beyond rare in its original run. Because of that I cannot offer you any specific dates. In fact the only Sunday I have even seen from the original run is the one you see above, which was courtesy of Cole Johnson. You'll note that it ran in the notorious New York Evening Graphic, which I did not know ever even HAD a Sunday edition. Yeah, we're talking RARE.

I have, however, seen plenty of the Sundays, though. Just not in the original run. McClure sold the Sundays off to World Color Printing, and WCP ran them as part of their Sunday sections from October 1927 until late 1928. That would seem to indicate that Carr produced about a year's worth of them, and thus the Sunday had a longer run than the daily. I just can't offer the actual running dates; perhaps if I triangulated from this one Graphic example, and assumed that the WCP run is in order, I could ... nah ...

Comments:
How about "Dad's an Idiot." A lot of television commercials use this theme

50s TV show fathers were often like this. I thought of them as "Daddy Dunce" shows.

Yes I was going to say standard 50s/60s situation comedy.

Well, I was thinking of something more scholarly sounding for our term, but I must say Daddy Dunce has a delicious alliteration to it.

Obscurity of the Day: The Lad That Loved a Lady 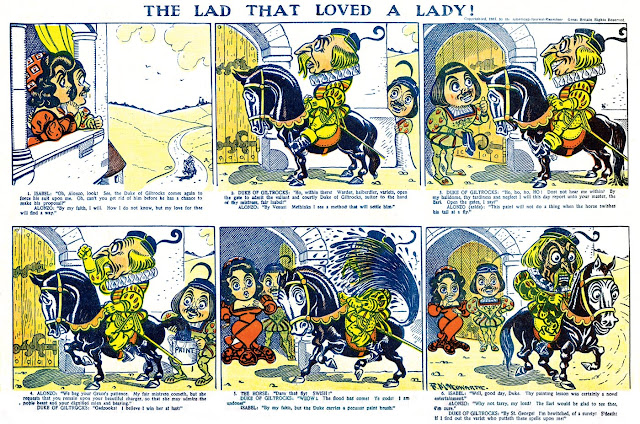 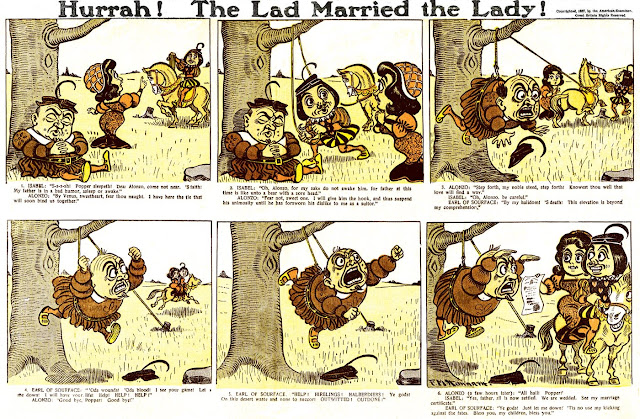 In The Lad That Loved a Lady, the great F. M. Howarth did something that was seldom seen in comic strips of his era -- he penned a series of comic strips that ends in an actual conclusion.

The story, set in medieval times, was simple enough: the beautiful and bumptious Isabel, daughter of the Earl of Sourface, falls in love with Alonzo the page, an underling who serves in her father's castle. She eggs on Alonzo to win her fair and square and thus save her from the advances of several very unappealing but high-born suitors. In a series of escapades, Alonzo proves himself to be a master trickster by successfully outwitting the other suitors. And then, in the final strip (seen above), Alonzo even gets the better of the Earl of Sourface himself, and thus wins the hand of Isabel and the grudging approval of her pa.

A couple other comments on the strip. First, notice that the top strip actually has the art panels out of order with the captions below. This is a problem I don't recall ever having seen before in a Hearst Sunday, and I find it mystifying how the problem made it all the way into production and into the Sunday paper. Second, Howarth must have been quite a student of Renaissance romantic literature, because he does an absolutely superb job of writing the captions in that ultra-flowery romantic style. Forsooth, I am by my spurs ever so impressed!

Obscurity of the Day: Campus Clatter

In 1969 college campuses were ground zero for anti-war protests, anti-government groups, drug experimentation, and unrest of just about any kind you'd care to name, So it seems rather odd that the NEA syndicate picked this particular moment to offer Campus Clatter, a daily and Sunday strip which uses that environment for the purposes of light comedy.

Campus Clatter was brought on NEA's roster to replace The Willets, a spin-off of Out Our Way that hadn't really taken hold. The strip debuted as a daily on July 7 1969, and a Sunday was added March 15 1970. The creator of the new strip, Larry Lewis, was a cartoonist in his 40s with a mostly commercial background. He sold NEA on the strip strictly through a mail-in submission, much to his amazement.

Lewis stated that he was able to keep up on the current campus scene because his wife was a college teacher, and his daughter a student. While the strip did make an occasional effort to reflect current events, however, few of the gags would have seemed out of place in a 1930s issue of College Humor.

The strip was further hobbled by having no strong characters; the lead, Bimo Burns, is an everyman with no discernable personality. The strip was pretty strictly gag-a-day, and Lewis liked a regimented group of subjects -- "in a typical week I try to have at least 2 classroom gags, one gag related to sports, one to the administrative end of things, another to social life, and perhaps one to faculty." In fairness, this sort of approach worked very well for Mort Walker, so perhaps Lewis had the right idea.

With Doonesbury taking the comic strip world by storm in late 1970, you have to wonder if Lewis consdered making his strip a little edgier to compete. If he did, he evidently decided against the notion. Campus Clatter stayed true to its roots all through the run, which had Bimo Burns evidently failing a lot of courses so that he could stay enrolled at good old Doolittle College until October 2 1976.

Comments:
Wish you can tell us about the Willets that was replaced, if you have a chance!!!

I recall that "Doonesbury" triggered a small flood of actual college student strips trying to jump to national syndication. Are any others of "Doonesbury" vintage still going?

Geez Donald, maybe I'm just getting old and foggy, but I can't think of a single college strip that followed Doonesbury's lead back in the early 70s off the top of my head. Undoubtedly there were some, but unless something obvious is eluding me, none made much of a lasting impression. I think most of the Donesbury wannabees date more from the early 80s, when the strip went on hiatus, creating a feeding frenzy of strips looking to take Trudeau's clients.

The fathers shared an uncle according to the first appearance making them some kind of cousins. They were probably not first cousins as they didn't seem to know their relationship so uncle probably meant brother of a cousin or something making the father's at best second cousins.

The family had a teen-age son and daughter and a dog.

I'm probably conflating a few things in my own boomer fog, but remember stumbling across a steady trickle of paperbacks of what looked like badly drawn college strips, some syndicated and some strictly student (meant for the college bookstore?). A few of the better ones I later recognized as "alternative weekly" strips, like Unconscious Comics.

"Bloom County" was the one that took the Doonesbury spot in the San Jose Mercury -- because of its semi-editorial cartoon status it had a designated piece of real estate between some regular columns instead of the comic page. I developed a perhaps unfair prejudice against Bloom County because it then felt too much like a deliberate Doonesbury knockoff, not helped by an interview where the creator went on about why he was edgier and better. I still suspect the strip owes much of its success to matching the look and feel of Doonesbury when a sub was needed, much as Mallard Fillmore was embraced by editors as the quasi-official "equal time" answer to Doonesbury.

While Lewis's strip didn't set the world on fire, it was a really attractively drawn feature in the old Mort Walker studio style. I'm guessing that the idea was to have a "relevant" college-oriented feature that looked like a standard strip and which also wouldn't offend anyone With a better cast of characters, who knows what might have happened?