January 16 1909 -- It all started as a minor case in which some employees of the city's library were accused of padding their time records. Then library director of research Dr. C.J.K. Jones turned the proceedings into a circus, producing copious detective-like notes he purports to have kept on the comings, goings, and misdeeds of the library's female employees. He in turn is accused of keeping a bottle of whisky hidden in the library's safe, from which he dispenses tipples to any female employee who feels faint or dyspeptic, and thus making the safe room some sort of den of debauchery. Then another employee claims to have walked in on two of the women librarians engaged in behavior so shocking that his sense of decorum did not allow him to describe its nature on the witness stand.

Herriman, sadly, seems oblivious to the cartoon possibilities of all this. What sort of yellow journalist is he, anyway?

Comments:
Herriman refers to Big Chief Lummis in this cartoon, who must be Charles Fletcher Lummis, who at one time was editor of the Los Angeles Times. In 1905 he was a L A City Library staffer and an expert on American Indian Lore. He built a house called El Arisal which is an historic landmark today. 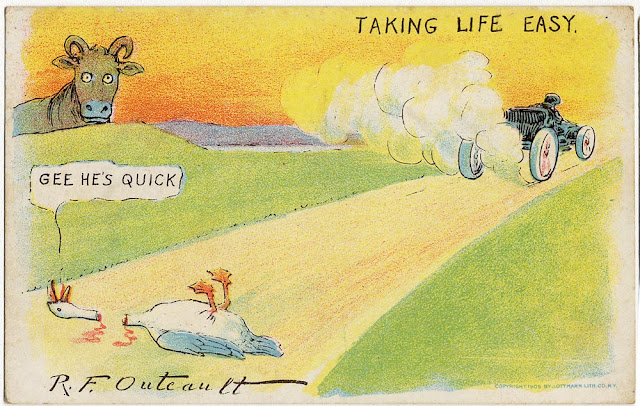 Oh my. Can't imagine this card was a big seller. I mean, the wordplay is actually inventive and all, but still ... Even the cow can't believe that this card was published.

Anyhow, this is another Outcault card from J. Ottmann copyrighted 1905.

I checked out your book (American Newspaper Comics - An Encyclopedia Reference) yesterday from my local library. I wanted to give you an update in regards to the end date you gave Virgil Partch's "Big George!".

You have it listed as 1989, when it actually ended on June 8th, 1991 (as sourced from the Elyria Chronicle Telegram). I'm not sure when the Sunday strip ended, as I can't find any examples as recent as 1983.

Here's the source, cropped from Newspaper Archive (a Saturday):
http://imgur.com/a/qJUt7

Hi Ben --
Thanks for the correction. I'm not on newspaperarchive (their business practices were pretty slimy in my case). Would you mind sharing the full page of that so hopefully I can read the newspaper date? I wouldn't ask but the copyright date on the panel itself is totally illegible, so I just want to make sure. Sometimes they misdate papers. Thanks, Allan

OK Allan. I'll try and do that first thing (or second thing) tomorrow.

Obscurity of the Day: The Man from Montclair

Freshly purchased by Hearst, Winsor McCay's 1912 was a hugely productive year. He kept up his fabulous  Sunday strip Little Nemo (now titled In The Land of Wonderful Dreams), produced and toured with his second animated film How a Mosquito Operates, and also contributed a substantial number of weekday strips to Hearst's New York American.

Among those strips was The Man from Montclair, which appeared occasionally from May 10 to December 21 1912. The gag is that this fellow who lives in Montclair New Jersey, who is apparently quite the pillar of the community out there, comes into the city and gets involved in shenanigans, usually related to chasing girls, that he sure doesn't want the home folks to hear about. As Emerson said, "commit a crime and the world is made of glass." It seems like everybody he meets when he's up to no good is from Montclair.  Winsor McCay doesn't go for graphic fireworks in the strip, but the perceptive take on what people do when they're away from home is a sharp psychological study.

Comments:
The strip appeared in other papers in the Hearst chain. In the Chicago Examiner, it had a change of venue to become "The Man From Evanston". maybe this happened elsewhere.

Other McCay strips can be seen at: 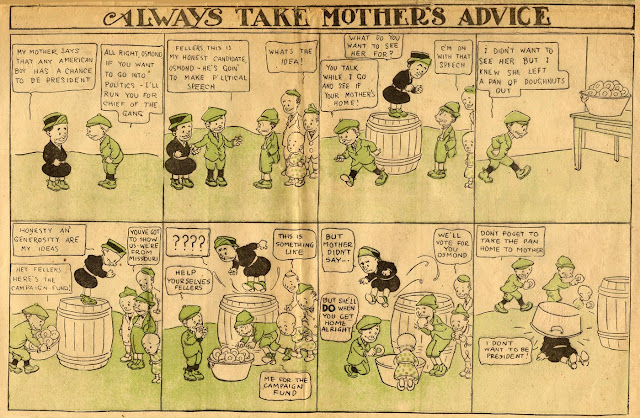 When Art Bowen produced material for the past-its-prime McClure Syndicate Sunday comics section in late 1912 to early 1913, quite frankly he produced very little worth remembering. Here is Always Take Mother's Advice, a strip about a kid who gets in trouble in spite of trying to be good. It's a strip that takes up a half page's worth of space, and nobody can take that away from it. 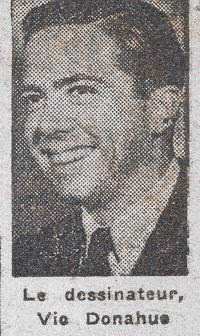 Victor Paul “Vic” Donahue was born in Philadelphia, Pennsylvania, on August 28, 1918. The birthplace is from Donahue’s brief biography at AskArt.com and the birth date is from the Social Security Death Index which also had his full name.

In the 1920 U.S. Federal Census, Donahue was the youngest of two children born to William and Fern who would be recorded as May in later censuses. Donahue’s father operated a sheet metal business. The family resided in Philadelphia at 569 Herman Street.

Maywood, Illinois was the hometown of the Donahue family in the 1930 census. They lived at 320 Lake Street where Donahue was the second of three children, whose father was an automobile mechanic. Some time later the family moved again.

According to the 1940 census, the Donahues were residents of Omaha, Nebraska. Their address was 1330 South 26 Street. In the occupation column, Donahue was a “new worker”. The Omaha World-Herald, October 5, 1969, said Donahue graduated from Technical High School in 1937. (One of his teachers was Anna Myers who became head of the art department in 1939, according to World-Herald, June 7, 1951.) Donahue, who never attended art school, had a year at the University of Omaha. He drew sports cartoons in Chicago for weeklies and joined the World-Herald in 1938. During World War II, Donahue served in the Marine Corps.

A Museum of Modern Art press release, for the exhibition of art by U.S. Marines, said the following:


T/Sgt. Victor P. Donahue, born 1918 in Philadelphia, enlisted in the Marine Corps January 1942. He was trained for the Marines on the West Coast and qualified as a marksman with both pistol and rifle. Previously, he had been doing sketches for an Omaha, Nebraska newspaper [World-Herald], as well as some commercial art work. In his spare time, he was a drummer with a swing orchestra which toured Nebraska and neighboring States. He was originally classified as a musician in the Corps. His drawings, however, brought him to the attention of Marine authorities and he was eventually reassigned to the Division of Public Relations as a combat artist. Today he is with a combat unit in the Southwest Pacific.

The press release described two of four drawings by Donahue.


T/Sgt. Victor P. Donahue has both humorous and serious pen-and-ink drawings in the exhibition. One illustrates in graphic detail the varied activities of Embarkation: trucks drawn up to a small inlet, landing barges with their ramps down receiving men, guns and equipment. Another of Sgt. Donahue’s sketches is called Combat Reporters and shows some belligerent Marines climbing the heights of a newly established beachhead and vastly annoyed to see two combat reporters there ahead of them busily writing and sketching the arrival of the tough guys themselves, whose motto is always “First to land.”

Donahue’s art was published in the Marine Corps Chevron June 10, 1944 and February 3, 1945. The cover of Liberty, July 7, 1945, featured Donahue’s illustration of a Marine plugging his ears as a string of firecrackers explode. 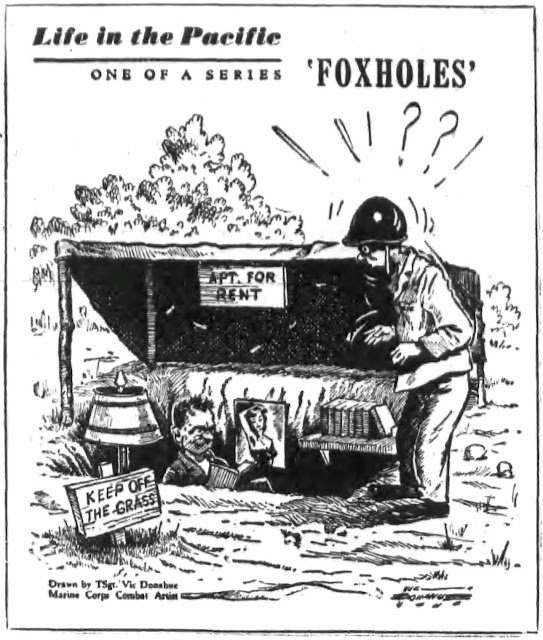 
Donahue provided the art for a 1945 Marine Corps recruitment poster. The World-Herald, February 23, 1947, named him as one of the contributors to Semper Fidelis: The U.S. Marines in the Pacific 1942–1945.

American Newspaper Comics (2012) said Donahue produce material for the Newspaper Enterprise Association. Wings of Tomorrow—The Story of Aviation ran from October 28 to November 9, 1946; it was written by Charles Tracy. Trip to the Moon and Back appeared February 10 to 15, 1947. India, Background for Freedom also had a short run from August 11 to 16, 1947. 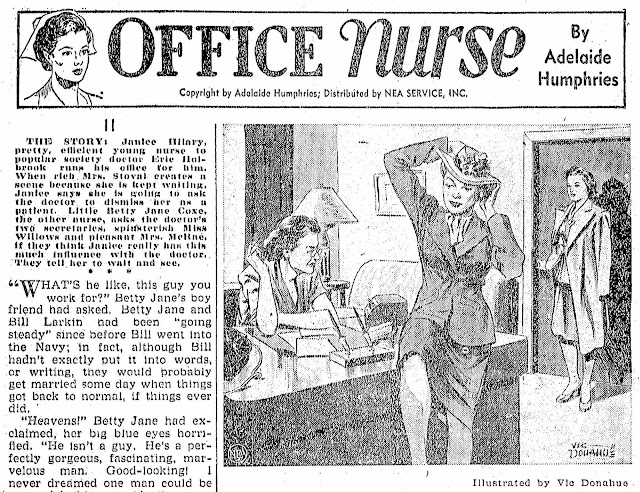 The World-Herald said Donahue left the NEA in 1948 and freelanced for comic book publishers Fawcett Publications, Harvey and others. He was also a member of the Simon and Kirby Studio.

Donahue relocated to New York City where he worked as an advertising, book and magazine illustrator. Later he moved to Arlington, Vermont where he lived for six years. In 1962, Donahue moved his family moved to Tucson, Arizona. The World-Herald said Donahue said Donahue was in the process of moving to Colorado Springs, Colorado in October 1969. It is not known how long he lived there. 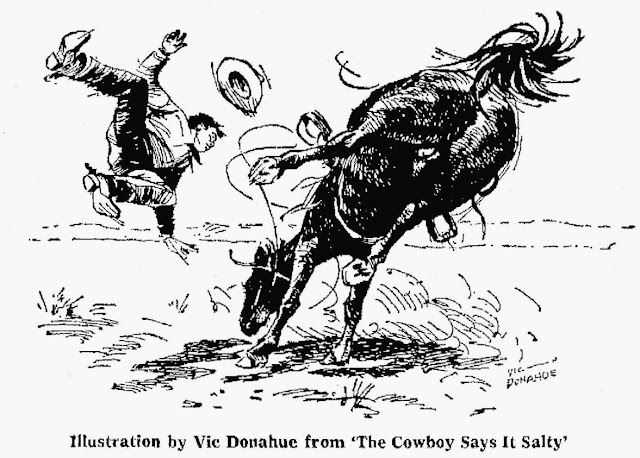 Donahue passed away December 16, 2008, in Arizona. He was laid to rest in the Southern Arizona Veterans Memorial Cemetery.

Obscurity of the Day: Wings of Tomorrow - The Story of Aviation

Wings of Tomorrow - The Story of Aviation is a closed-end NEA strip that really stretches the bounds of the definition of comic strip. Vast seas of type hanging at the bottom of each 'strip', and pictures that merely served to illustrate the blah-blah-blah should have led me to the conclusion that it didn't merit listing in my book. However, I was impressed enough at the quality of the illustrations that somehow I managed to make a case to myself for its inclusion. What can I say? If it offend thee, get thine magic marker and strike it out of your copy.

After the end of World War II, which saw huge strides in aircraft technology, people were asking, "So what next?" Well, here was aviaton expert Charles Tracy to tell those inquisitive folks, ably assisted on the visual end by Vic Donahue. The series ran two weeks, from October 28 to November 9 1946 (your mileage, er, newspaper, may vary as is typical with these NEA offerings). After a dull recap of aviation history that took up the first week, Tracy cut loose with the predictions. As is to be expected, he got some right, and others very wrong. He predicted burgeoning passenger air traffic, moon landings and even the automated parcel delivery that is just now starting to look feasible*. On the other hand, he envisioned an "air-car" in every garage, and he was pretty darn sure that most airplanes would soon be propelled by either rockets or atomic power. Have to hit the buzzer on those, fella.

* can anyone tell me just how the heck drones are supposed to safely leave a package at their destination? Are they going to drop it like a bomb from the sky? Or are they going to go the Yule route and drop the packages down the chimney? Or will they gingerly deposit it in the yard where some neighborhood tough will immediately recognize the opportuinity to abscond with some Amazonian treasure? You can't tell me they're going to hover at the front door, press the door bell and wait patiently for the hausfrau to appear and sign for the package.

Comments:
NEA did a lot of these topical news short-run series, many by R. J. Scott. Check out some here:


And some from A. J. Buescher:

I forgot to say, Central Press and KFS offered some of these news topic stories too, and that's where these Scott and Buescher strips come from..