I Learned it in the Funnies: Our New Age

There have been quite a few attempts to popularize science in the funnies, but without a doubt the most successful of them was Our New Age. Most strips tried to personalize or inject fun into the learning process, but that was never the approach of this strip, which took a no-nonsense approach. That's odd, because creator Athelstan Spilhaus was, besides behind a noted scientist, inventor and futurist, most definitely a bon vivant. He delighted in popularizing science for the common man, and it is strange that he didn't make more of an effort in Our New Age to be personable. Nevertheless, the strip was a big success.

Our New Age was perfectly timed for that success when it debuted from Hall Syndicate on September 21 1958. The newspaper-reading public was intensely fascinated by science and discovery since the Soviets had launched Sputnik less than a year before. They wanted to know what our own scientists we were up to, and how exactly they were going to shape the future. If they could get that information in a well-drawn comic strip, with clear and exciting explanations of the wonders to come, so much the better.

Athelstan Spilhaus had a big personality and a big brain. He was all over the map as a scientist because he was interested in just about everything, and he seemed able to make a major mark at anything to which he put a hand. The life story of this fascinating man is told in With Tomorrow in Mind, by Sharon Moen. It's an interesting read, and very reasonably priced in the Kindle edition.


Our New Age debuted as a Sunday-only strip, with striking art by one "Earl Cros". If that name rings no bells, it's because there's no such cartoonist -- it is an anagram of Carl Rose. The famous New Yorker cartoonist evidently preferred to do this project under the radar so as not to dilute his star power as a magazine gag cartoonist. The brightly colored and stylish art just about jumps off the page, and was no doubt a big asset to getting the strip its initial large newspaper clientele. Rose added much-needed humor to the strip by humanizing Spilhaus's often coldly explained predictions of the future.

Rose bowed off the strip with the Sunday of May 7 1961, and was replaced by E.C. Felton. Felton was not nearly as accomplished a cartoonist as Rose, but he followed the example that bright colors and a bit of levity would help to get across Spilhaus's ideas.


Starting on the first day of 1962, Spilhaus added a daily version of the feature to his repertoire. The daily was a one-column panel, quite tall, and the rather minimal art was supplied by Ray Evans Jr.

1962 saw an additional change in the creative line-up. Starting on April 15, the Sunday art began to be credited to "Gene Felton". As later events would make plain, this name presumably indicates that E.C. Felton was now assisted by the man who would soon take over the feature, Gene Fawcette.

Felton's and Fawcette's very different styles were expertly combined in the 'Gene Felton' Sundays, with Fawcette's style slowly but surely taking over as weeks went by. From July 15 to September 2 all art credits disappeared from the strip (presumably this is Fawcette alone now), and then starting September 9 Fawcette was allowed to sign his work. Fawcette's art on the feature is very different than his predecessors. He employs a classy sketchy illustrative style with rarely a speck of humor evident. Instead of humor, Fawcette tried to attract eyes by drawing scantily clad women when possible, a not at all bad tactic. If the original art style was an important selling point for the strip, the change seemed to not have any negative impact on sales. In fact the strip apparently gained clients after the switch to Fawcette.

The final artist change was soon made. Ray Evans Jr. ended his stint on the daily after one year, and Gene Fawcette took it over with the December 31 1962 panel. Why all the artist changes? My theory, based on a reading of Spilhaius's biography, is that the man was hell on wheels to work with, as is often the case with geniuses. Although I have no documentary evidence for why Rose, Felton and Evans left the strip, it wouldn't surprise me a bit if it was clash of personality. Apparently this was never a problem for Fawcette, who would stick with the feature to the end, even outlasting Spilhaus himself. 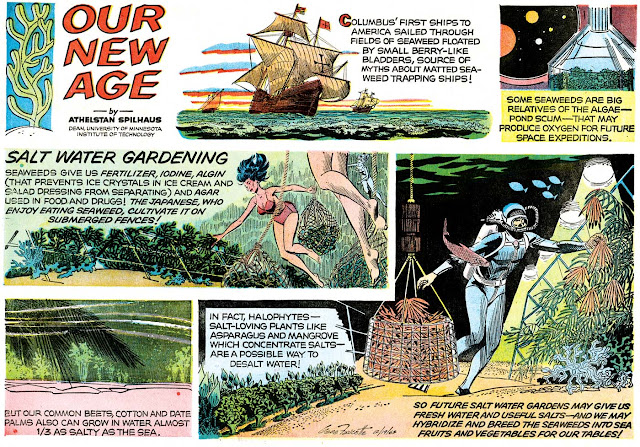 The daily never did well in comparison to the Sunday, in fact it is a rather rare item. Spilhaus apparently decided it was no longer worth his time and he bowed out as writer on it on July 22 1967. Undaunted, the syndicate continued the daily panel with cartoonist Gene Fawcette now apparently handling the writing as well. In an attempt to make it a paying proposition, Fawcette and the syndicate began monkeying with it. On the first day of 1968, the title of the panel was changed to Now. Evidently that wasn't the magic bullet, so six months later, starting June 3, there was another name change, this time to New! Despite that exciting exclamation point, the change was greeted with indifference. Finally the syndicate (now Publishers-Hall since 1967) gave up and dropped the daily on May 3 1969. But Gene Fawcette decided that it still had some value, so he began self-syndicating it. He did so until November 30 1970, when Canada Wide Features took on the syndication of New! They supplied it both north and south of the border to very few clients until it was finally cancelled on July 6 1974.

The Sunday, with Spilhaus and Fawcette still at the helm, continued with a healthy client list through the end of the 1960s. It then began to falter. Whether this was because Spilhaus was running out of material, or readers were losing interest in cutting edge technologies I don't know. But there's no doubt that the distribution of the Sunday trails off in the 1970s. By 1974, Spilhaus decided he'd had enough. His last byline appeared on the Sunday of March 31 1974. Fawcette then took over all duties on the Sunday, but the writing was on the wall. Without the Spilhaus name clients were disappearing quickly. The Sunday was finally ended on November 26 1975. Art Lortie says that the last few Sundays were reprints of earlier material.

When President Kennedy needed someone to popularize science and technology at the Seattle World's Fair he called on Spilhaus to take on the huge project. When Spilhaus asked Kennedy why he'd been chosen, Kennedy reportedly said, "The only science I ever learned was from your comic strip in the Boston Globe." Athelstan Spilhaus is justly famous for many accomplishments, but he admitted that he would most likely be remembered primarily as the writer of Our New Age.