Earl Cros was the pseudonym/anagram of Carl Rose who was born on February 21, 1903, in Odessa, Russia. The birth information was on his World War II draft card. The same birth date is at the Social Security Death Index. According to the 1930 U.S. Federal Census, Rose’s family emigrated in 1907. His father was German and his mother Russian. Their naturalization papers have not yet been found at Ancestry.com. It’s possible Rose’s surname changed when he was naturalized.

City Life Illustrated, 1890–1940: Sloan, Glackens, Luks, Shinn, Their Friends and Followers (1980) said Rose “studied at the Art Students League from 1923 to 1926 and again in 1928 under Boardman Robinson and John Sloan. According to his wife, Dorothy W. Rose: ‘There were other teachers, but these two had the greatest influence on him.’ In 1925, while still a student at the Art Students League, Rose began drawing for the New Yorker. During his career over 600 of his cartoons were published in the New Yorker….From 1927 to 1929 he worked for the New York Evening World. them he drew political cartoons for the Boston Herald from 1929 to 1932 and for a short-lived newspaper called P.M.”

In the 1940 census Rose’s home was at 197 Rowayton Avenue in Norwalk, Connecticut. According to the census, Rose resided in New York City in 1935. The self-employed commercial artist had two children: seven-year-old Paul, a Massachusetts native, and two-year-old Margaret, a New Yorker.

On February 16, 1942 Rose registered with the draft board in Rowayton, Connecticut. He stood five feet five inches and had hazel eyes and gray hair.

American Newspaper Comics (2012) said Rose was the first of four artists to draw Our New Age which ran from September 21, 1958 to October 26, 1975. Rose, as Earl Cros, produced the Sunday strip from September 21, 1958 to May 7, 1961. He was followed by E.C. Felton, Gene Fawcette and Ray Evans, Jr. who did the daily panel during 1962. Dr. Athelstan Spilhaus wrote the series for Publishers-Hall Syndicate. 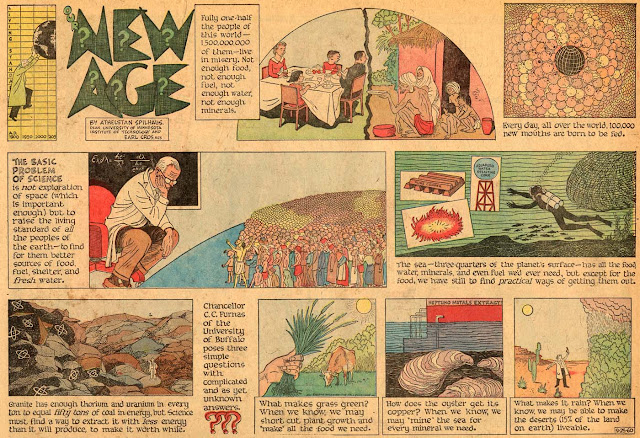 The Connecticut Death Index said Rose passed away June 20, 1971, in Norwalk, Connecticut. American Legion Magazine, August 1971, said “Artist and cartoonist Carl Rose died at Rowayton, Conn., on June 20 — aged 68 — after a long illness. Carl wasn’t a Legionnaire, but his work was familiar to our readers. The last job he ever did in his life was the line-drawing illustrations for our June 1971 cover article, ‘The Pentagon’s Alliance with Industry,’ which he worked on from his hospital room….”


Further Reading
Sunday Funnies Blast Off Into the Space Age