Eugene Clair Felton was born on October 25, 1926, in Cuyahoga Falls, Ohio according to his Social Security application which named his parents, Harold R. Felton and Margaret Knallay.

The 1930 U.S. Federal Census listed Felton as the youngest of two sons. The family lived in Cuyahoga Falls at 1647 Olive Street. Felton’s father was an accountant at a rubber company.

According to the 1940, the Feltons moved from Cuyahoga Falls to Findlay, Ohio sometime after 1935. Felton and his parents resided at 131 18th Street. His father was a traffic manager at a rubber company.

Felton was a Michigan resident when he enlisted in the Army on February 12, 1945 at Fort Sheridan, Illinois.

After his service, Felton lived in or near Washington, D.C. He was a member of the Washington Society of Landscape Painters from 1947 to 1955. The Evening Star (Washington, DC), December 24, 1950, covered the Landscape Club’s exhibition at the Arts Club. The review said “Eugene Felton’s ‘City’ and Carl Nyquist’s ‘Dead End’ (street) convey moods of despair and mediocrity, respectively.” Information about Felton’s art training has not been found.

Felton was a commercial artist. His posters for Steak Ranch Restaurant were cited in a 1956 issue of Art Direction, a graphic arts magazine.

The Evening Star, February 13, 1959, named the new officers of the Creative Graphic Services Association of Washington. Felton was its secretary.

Felton Design Studio produced the design and art for Athelstan Spilhaus’s publication, Turn to the Sea, in 1959. In the book, Navy Surgeon (1959), author Herbert Lamont Pugh acknowledged Felton’s contributions, “These drawings were made for me by Eugene C. Felton, a member of the Audio- Visual- Educational-Aid Section of the Bureau….”

Felton was listed in Who’s Who in Commercial Art and Photography: A Guide to Artists, Photographers, Agents, Studios, Representatives and Buyers of Art in the Graphics Field (1960) 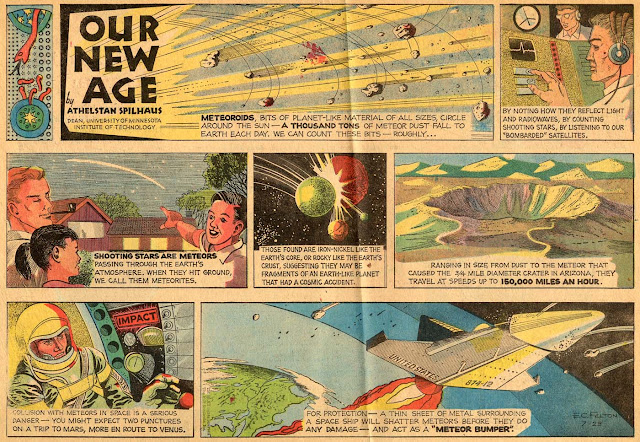 American Newspaper Comics (2012) said Felton was the second of four artists to draw Our New Age which ran from September 21, 1958 to October 26, 1975. Carl Rose, as Earl Cros, produced the Sunday strip from September 21, 1958 to May 7, 1961. E.C. Felton did the Sundays from May 14, 1961 into 1962. Gene Fawcette continued the Sundays and later the dailies after Ray Evans, Jr. who did the dailies during 1962. Dr. Athelstan Spilhaus wrote the series for Publishers-Hall Syndicate.