Obscurity of the Day: Illustrating Webster 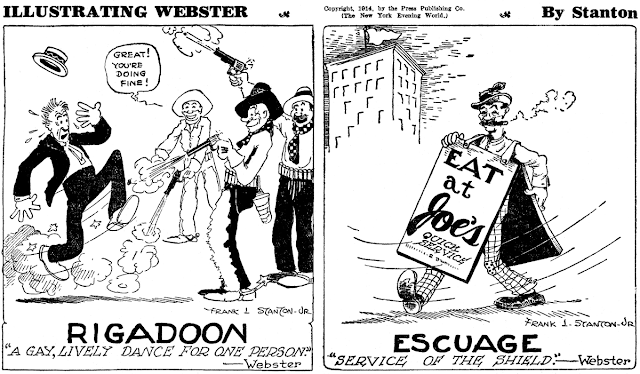 Frank L. Stanton Jr. came to the New York World with a fun concept -- cartoons illustrating in a humorous way the definition of obscure words. The World bit and began running the panel cartoon Illustrating Webster on June 25 1914, but Stanton must have been shopping them around for awhile, because the first ones include a hand-written copyright year of 1913.

The same concept would spawn several similar features, some long-lived, later on, but Stanton's version didn't stick. It only ran on some occasional weekdays in the Evening World through October 31 1914.

Stanton only managed to sell one additional feature that I know of, and that was to the J. Keeley Syndicate of Chicago two years later. It's too bad because his cartooning style was pleasing enough, and he had a good sense of humor. Stanton stayed in the publishing game, but mostly as a publisher of little-remembered magazines.