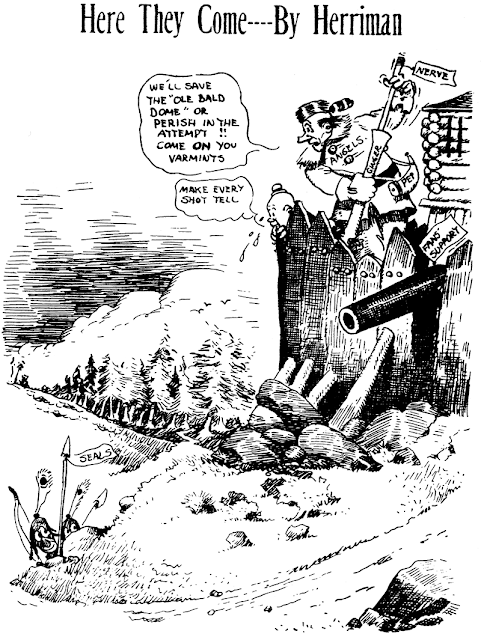 August 9 1909 -- The Angels are about to take on the San Francisco Seals in a series considered pivotal to the outcome of the season, and Herriman avers that between pep, fan support, nerve and ginger that they will be able to successfully defend "Ole Bald Dome", manager Hen Berry.

Comments:
When I commented last week on Herriman leaving his signature off I had failed to notice he had been leaving it off for a month or more (and continuing, as above). The Examiner doesn't seem to be getting very much out of him during this time, assuming you're not leaving out a number of items. I wonder, was he working somewhere else at the same time?

Eddie -- Yes, Herriman was trying to get something to stick with the national Hearst chain at this time. 1909 saw him try Mary's Home From College, Baron Mooch and several others, some of which never even ran in his home paper.

Allen-
of course! I had forgotten that you were leaving out the various strips that have been thoroughly covered elsewhere.
keep 'em coming!
Eddie 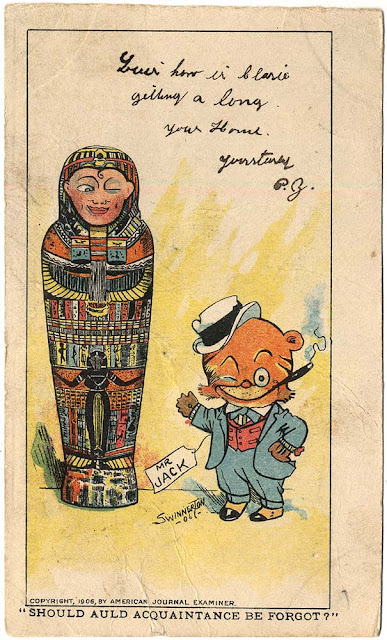 Here's another Swinnerton card from the Hearst giveaway series of 1906. Amazing attention to detail from Swinnerton on that Egyptian sarcophagus! This particular postcard must have been especially popular, as I see it more than any of the other Hearst cards.

This particular example was complimentary of Hearst's Los Angeles Sunday American, one of his less successful papers.

Obscurity of the Day: Out of the Frying Pan 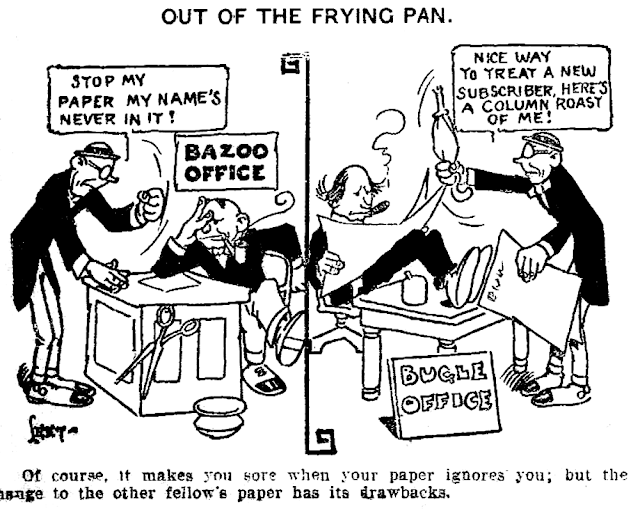 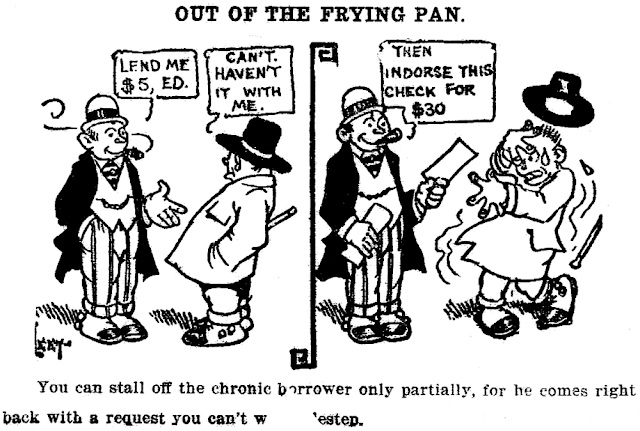 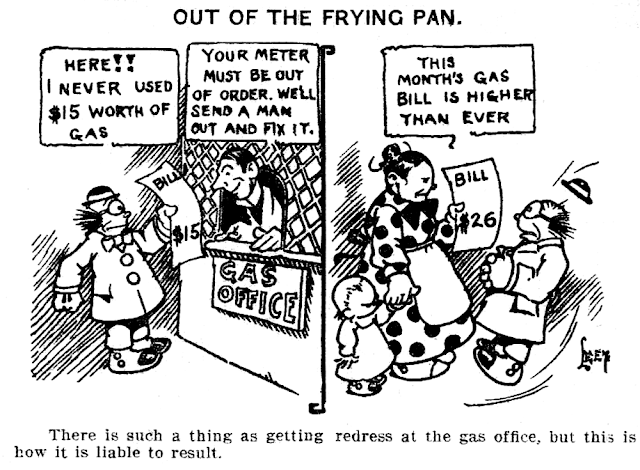 When NEA started including cartoons as part of its blanket service around 1903, they offered lots of little one-shot gag panels, and no continuing series. It took about three years before they started getting the hang of the continuing series concept, and the fellow who led them by the nose into the new age was Frank R. Leet. Leet was a real workhorse in his NEA days, offering up a steady stream of graphic humor. He came up with lots of little series, one of which was Out of the Frying Pan. This little two panel "before and after" weekday cartoon was offered by NEA from January 7 to February 21 1908*.

Obscurity of the Day: Isn't It Always the Way? 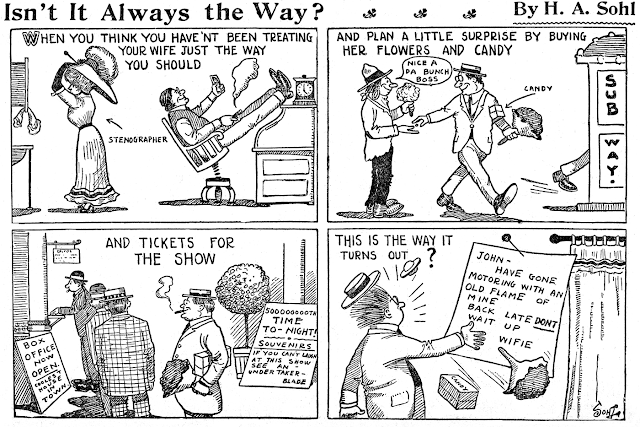 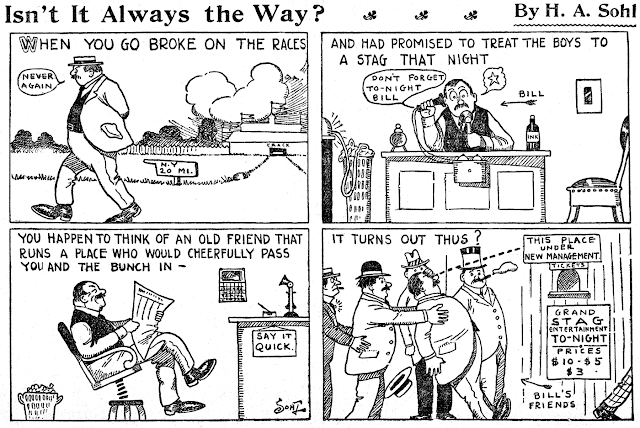 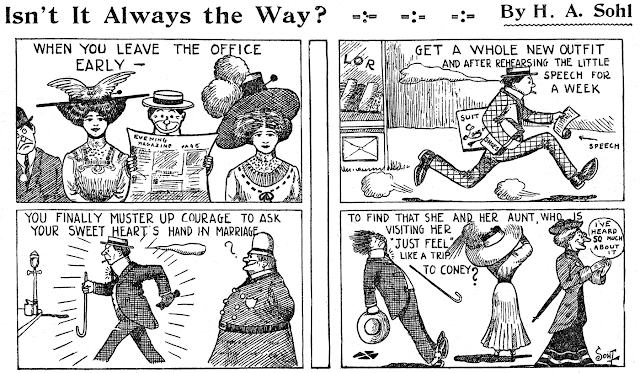 Isn't It Always The Way? is one of the countless precursors to Hatlo's They'll Do It Every Time, in which each episode shows a hapless boob's plans going awry. This particular one appeared as a weekday strip in the New York Evening World from August 4 to November 2 1908*. It represents the only continuing title ever created, as far as I know, by a fellow who was bylined as H.A. Sohl. Sohl created a few one-shot cartoons for the World, but that's as far as I can track him down. It's too bad because although his work is a little rough around the edges, he definitely had the prized "drawing funny" gene.

It's probably just my base imagination, but in the top sample are we seeing a steno gal in the universal cartoon pose of getting dressed after, well, you know? And in the last panel it seems wifie is also out philandering in a most frank way? Either I have a dirty mind, or an editor was really asleep at the wheel letting this one into the paper.

Comments:
There's a clock showing 5, so she's getting ready to leave. The odd identifying label of "stenographer" suggests an editor had an imagination similar to yours.

The cartoonist does seem to find huge hats amusing. The last strip has a little side gag of a guy leaning away from an outsized chapeau. And the final panel again offers a young lady putting on a hat of scale. Reminded of the "School Days" panels where the pretty teacher not only affected huge hats, but a hairstyle that incorporated walking sticks.


Charles Henry Alston was born on November 28, 1907, in Charlotte, North Carolina. His full name was published in the 1929 Columbia College yearbook the Columbian, and the birth date is from the Social Security Death Index.

In the 1910 U.S. Federal Census, Alston was the youngest of three children born to Primers P. and “Hannah”. The household included a niece, nephew, and mother-in-law. They resided in Charlotte, North Carolina at 416 West Third Street.

About six months after the census enumeration, Alston’s father died on October 18, 1910, according to his North Carolina death certificate which has transcribed at Ancestry.com.

The North Carolina, Marriage Records recorded the marriage of Alston’s mother, Anna, to Harry P. Bearden on August 21, 1913. Whitney Museum of American Art: Handbook of the Collection (2015) said Alston moved “with his family to Harlem in 1915”.

Bearden signed his World War I draft card on September 12, 1918. His address was 55 West 98th Street in Manhattan, New York City. He was superintendent of service at Bretton Hall.

The same address was recorded in the 1920 census and 1925 New York state census.

African-American Artists, 1929–1945 (2003) said Alston graduated from “DeWitt Clinton High School in the Bronx, where he served as art editor of the school magazine”. Alston continued his education at Columbia University in New York City.

The New York Age, December 6, 1930, reported the Arthur Wesley Dow Scholarship was awarded to Alston and added, “His career while an undergraduate of Columbia College is worthy of mention. He was art editor of the school’s humorous monthly, ‘The Jester,’ also art editor of the ‘Varsity,’ the literary organ of the college, and of the Morningside independent magazine of the Heights institution. He received the gold King’s Crown while at Columbia. He is vice-president-elect of Eta Chapter of the Alpha Phi Alpha fraternity. He is specializing in modern art at Columbia.”

According to the 1930 census, Alston was with his family at 1945 Seventh Avenue in Manhattan. His occupation was “boys worker” at Utopia House. African-American Artists said “During this time, he offered free art classes to young people at neighborhood centers, including Utopia House and the Harlem Community Art Center. His now-famous art students included Jacob Lawrence, Robert Blackburn, and Romare Bearden.”

During World War II Alston enlisted in the army on December 27, 1943.

American Newspaper Comics (2012) said Alston drew The Color Guard from January 24, 1943 to September 21, 1944. The series was produced for the Office of War Information (OWI).


Prominent Doctor Marries Soldier
Dr. Myra Logan, one of Harlem’s most prominent women doctors, and daughter of the late Mr. and Mrs. Warren Logan, of Tuskegee Institute, was married Saturday to Pvt. Charles Henry Alston, son of Mrs. Anna Bearden and the late Rev. Primus Alston, of Raleigh, N. C. Rev. John H. Johnson, rector of St. Martin's Church, officiated at the informal ceremony in the presence of the immediate families at the home of her sister, Louise Logan.

Dr. Logan who received her degrees from Atlanta University, Columbia University, and New York Medical College, is on the staffs of Harlem Hospital and Cancer Institute.

Pvt. Alston who completed his undergraduate and graduate study of fine arts at Columbia University, has had his paintings on exhibit at the Downtown gallery at the Museum of Modern Art. Prior to joining the army he was on the art staff of the Office of War Information in Washington.

Alston’s career as an artist and teacher is detailed here.

Alston passed away April 27, 1977 in New York City. His death was reported the following day in The New York Times. 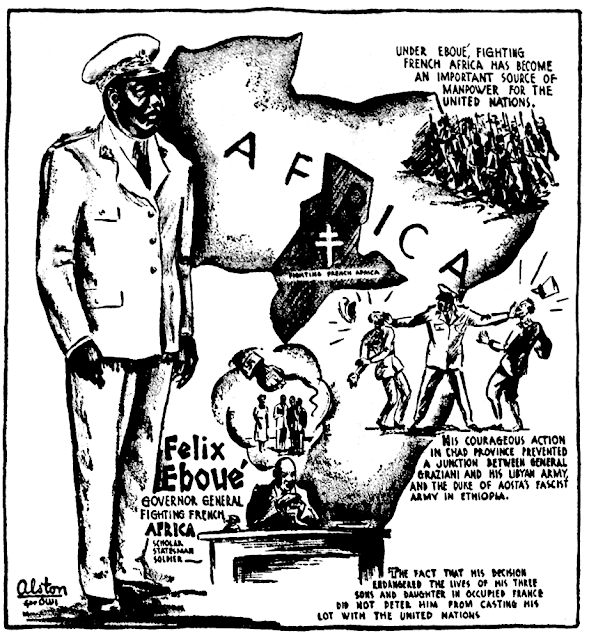 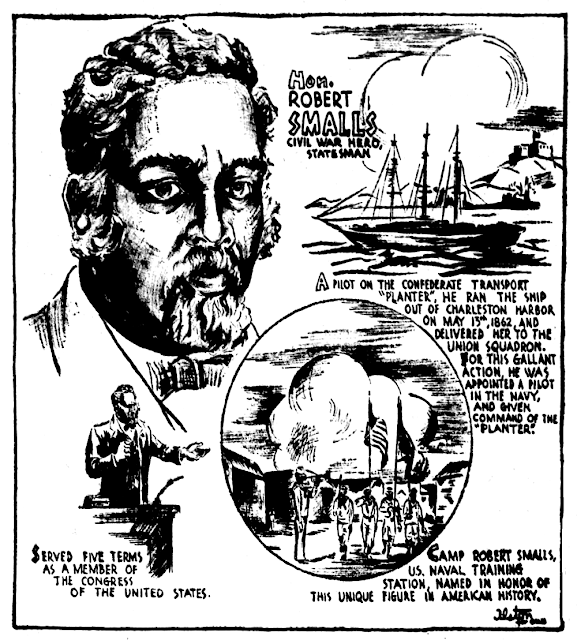 During World War II, the Office of War Information offered newspapers many free patriotic features designed to help with morale and sell war bonds. Among these were some comic strips and quite a few panel cartoon series. So far I've only found a single such feature that was designed to run in black newspapers, and that was The Color Guard.

The Color Guard was a panel series about heroic figures of black men and women of history, going heavy on those whose stories had either a patriotic or military component. The series was produced by a competent cartoonist who signed himself only Alston, and he did not get a byline. Alex Jay has discovered his identity, and we'll have his Ink-Slinger Profile tomorrow.

The earliest I've found this panel showing up was on January 16 1943*, and the latest I've seen it running in a paper that offered it on a regular weekly basis was April 9 1944**. The Atlanta World offered one additional panel on September 21 1944, but I'm guessing that was a repeat to fill a hole, since other papers ended the series in April as well.

The samples above are from the New York Age, which ran the series minus its title bars.