Cleanthe Kimball Carr was born on April 9, 1911, in Middletown, New Jersey, according to her Social Security application. Her parents were Eugene G. “Gene” Carr, the cartoonist, and Helen G, Stilwell. In the 1910 U.S. Federal Census, Carr’s parents were Middletown residents on Riverside Drive.

The 1915 New York state census recorded Carr, her parents, a nurse and cook at 66 Tennis Place in Forest Hills, Queens.

The Brooklyn Daily Eagle, April 28, 1919, said Carr was one of over a hundred children who were guests at the annual Easter Week activities in the Forest Hills Inn.

In the 1920 census, the Carr family remained in Forest Hills at a different location, the Gardens Apartments on Dartmouth Street.

Carr’s verse was published in the Brooklyn Daily Star, March 28, 1921.


The Fly Peril.
Flies walk on the dirtiest things,
And then right on your plate.
If you eat some germs they carry around,
Death surely would be your fate.

Kill the vile old things with all your might
Before the summer heat.
They shall not walk upon my skin
Nor poison what I eat.


Miss Cleanthe Carr, daughter of Gene Carr, creator of the “Metropolitan Movies” cartoon feature of the New York World, is following in her father's footsteps toward an art career. She is a pupil at Miss Devell’s School and her work is represented in an exhibition of landscape and animal work now being shown at that institution.

Carr’s talent was recognized again by the Associated Press 1927 article, published in numerous papers including the Niagara Falls Gazette.


Convent Girl, 14, Draws Caricatures of Film Notables of Hollywood
Hollywood, (Cal.)., Sept. 27, (AP)—Every now and then some artist from South America or Mexico of France breezes into Hollywood and fascinates the natives with caricatures of screen celebrities.

Fourteen-year-old [sic] Cleanthe Carr came from a Pennsylvania convent, unheralded by the magazines or newspapers. Nor did she even know herself that she was going to cartoon the famous faces of filmdom.

But she had to amuse herself while spending the Summer vacation with her mother, who is a scenario reader, so she looked around and drew pictures of the stars.

Now critics hail Cleanthe as a genius. She is going back to New York soon to finish her preparatory school course, and plans to begin studying art under instructors then. Although her father, Gene Carr, is a successful cartoonist, Cleanthe has not taken any lessons from anyone.

“Except a few at the convent,” she explains, “but I dropped that course in a hurry because I was scolded for not putting enough clothes on my figures.”

Cleanthe was born in Red Bank, N.J., but lived there only a year. When not at school she is usually with her aunt in Brooklyn or in California with her mother. 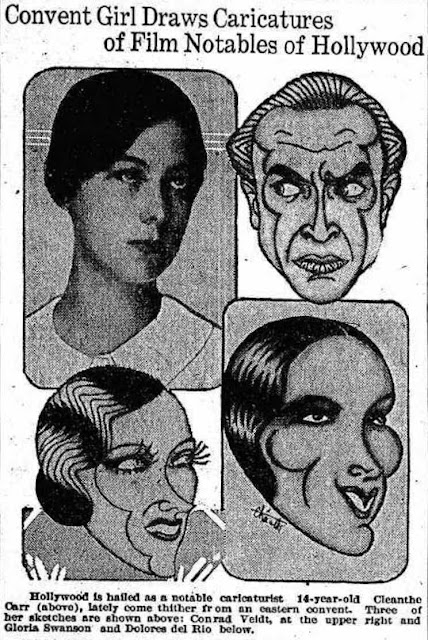 Carr and her mother visited Europe again in the summer of 1929.

According to the 1930 census, Carr’s mother was a divorcee. She and her mother lived at 160 East 55 Street in Manhattan. Carr was a self-employed commercial artist.

Carr and her mother returned from France on October 16, 1929.

The New York Evening Post, November 2, 1931, reported the death of “Sigmund M. Lehman, brother of Lieutenant Governor Lehman and member of the banking firm of Lehman Brothers, who died in Paris in April, 1930”. Carr was a beneficiary of his estate: “… a temporary life estate in $20,000 to Cleanthe Carr, payable at the age of twenty-four, …”

The Newspaper Feature Service produced a long-running series of romantic cartoons, by several artists, beginning in 1913. Carr contributed to the series in 1934.

The Albany Times Union (New York), April 4, 1935, published an article about identifying the handsomest man in the world. Among the people consulted were artists.


… Neysa McMein, and Cleanthe Carr, artists, found themselves unable to name their selections. Miss McMein pleaded that several years ago she made up a list of handsome men, and that she never had been able to live it down. Miss Carr, daughter of Gene Carr, declared she had never seen an outstandingly handsome man.

But Russell Patterson, famous artist, after much consideration, came forth with this list:


The Syracuse Journal, September 19, 1935, published a photograph of Carr with her drawing of Huey Long. 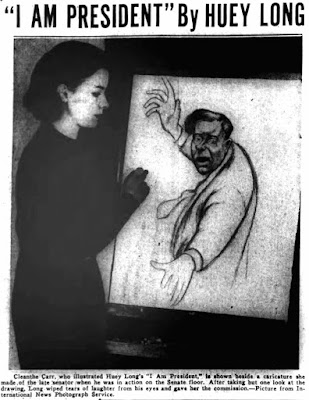 The Buffalo Courier Express, August 15, 1939, said “Newest Hollywood ‘must’ is to have a portrait painted by Cleanthe Carr, niece of Kim Moran.”

The gossip column in the Tacoma News Tribune, November 17, 1940, said “When Charlie Chaplin got around to introducing Paulette as ‘my wife’ in New York they were staying at separate hotels. And Chollie did the big town with Cleanthe Carr.”

In the late 1930s Carr moved to California. The portrait artist’s address in the 1940 census was 6470 Ivarene Avenue in Los Angeles. Lodging with Carr and her mother was Lionel Braham, 61, an actor and singer in motion pictures.

The California Marriage Index, at Ancestry.com, said Carr married Samuel Weill, on August 12, 1960 in Monterey, California. Who’s Who in Finance and Industry (1999) said Weill was an automobile company executive and Carr was his second wife. They divorced July 21, 1982 in Los Angeles.

Carr passed away October 1, 2001, in Los Angeles, according to the Social Security Death Index.