The Wheeler-Nicholson Syndicate Part I

Ray Bottorff Jr. recently pointed out to me a new paper online that briefly used the Wheeler-Nicholson syndicate offering, and that got me off my duff to revist this syndicate. Due to other new sources that have come online, I was surprised to find a much fuller picture of this obscure syndicate than I've had before.

Major Malcolm Wheeler-Nicholson, the president of this syndicate, is of intense interest to comic book fans. He is the fellow who, a decade after his foray into newspaper syndication, ran the company that introduced the world to Superman, Batman and the rest of the DC line-up of men and ladies in tights. While the Major's newspaper syndicate did not offer any superheroes -- so don't get your hopes up comic book fans -- comic book history buffs are nevertheless interested in his earlier involvement in this different part of the cartoon business.

I was surprised to find, first, that I have never done a post about any of the Wheeler-Nicholson offerings, and second, that I don't really find that anyone else has, either. The Major's grand-daughter is on record as working on a full biography of him, but that hasn't seen the light of day yet.  So it's high time that we shine some light on Wheeler-Nicholson Inc., and that's what we'll do over the next series of posts.

Major Malcolm Wheeler-Nicholson had a distinguished career in the armed forces, and an even more interesting episode that caused him to part ways with the military. This series of posts, however, does not claim to offer a biography of the man; I'm just going to cover what I know about his brush with the newspaper syndication world. Therefore, we're going to start things off with a brief look in at him in 1923, after he had parted ways with the military. Evidently his first stab at making a living in the civilian world was as a farmer, as we see in this clipping from the Fort Collins Courier of April 10 1923: 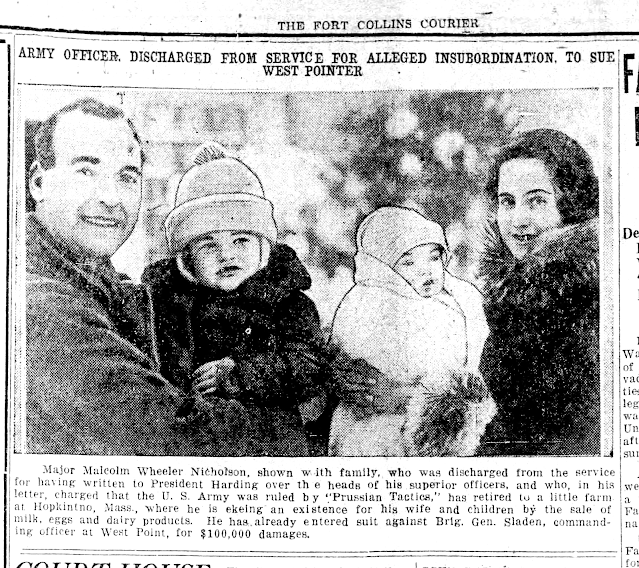 A restless soul like the Major seems unlikely to have been happy eking out a living selling eggs, so it is no big surprise that this did not last. Unfortunately, I do not find any trace of him through the rest of 1923 and throughout 1924.

At the beginning of 1925, though, we are back on the trail. In a minor blurb in the Poughkeepsie Eagle News of January 30 1925, we learn that he is now a "representative of the Famous Features Syndicate of New York City."

'Representative', of course, is the genteel way of referring to a salesman. So Wheeler-Nicholson had entered the syndication business from the ground up, trying to line up newspaper clients for a small syndicate.

When I found this blurb I'd not heard of Famous Features Syndicate (well, not this iteration of the name, anyway -- it was later used by another company). Curious as to what the Major was trying to sell, I did a little searching. Turns out that Famous Features, which came and went pretty quickly, initially offered a small roster of newspaper columns and features. Their main claim to fame was a column they were commissioning from a female reporter, Zoe Beckley, who had a measure of fame in that day. More importantly, though, Ms. Beckley was instrumental in getting Queen Marie of Rumania to write a column, a rare 'get' to have actual royalty writing for newspapers. Here is a large article from the Bimingham News (November 8 1925) in which the owner of the syndicate gets to crow over the achievement: 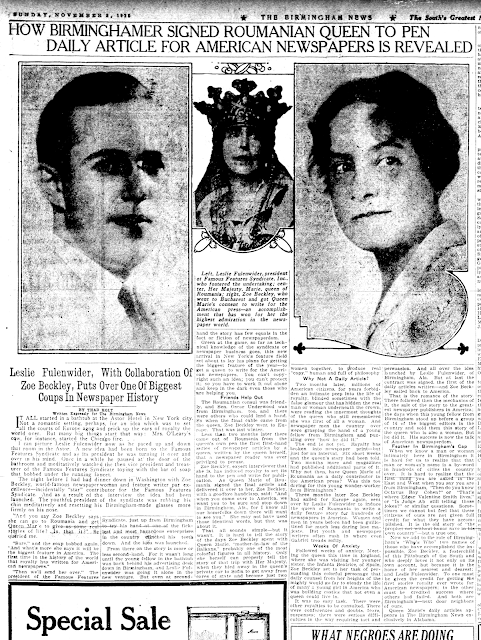 Famous Features gained another famous name in 1926, when the 70 year old S.S. McClure, practically destitute, came onboard as an editor and also penned a minor column that didn't sell well. He seemed to have good success at bringing in some fiction writers, his specialty, but the syndicate was on the skids.When Zoe Beckley jumped ship in 1928, that was about the end of the syndicate.

Famous Features did not ultimately become an industry player, but one thing it did do was inspire Malcolm Wheeler-Nicholson to enter the syndication business himself.

Index to this Series:

Part XII (M.A. Dunning: They Never Do This But Once, Maggie's Yiddish Moe)

Comments:
I am happy that I inspired further searching into The Major's syndicate. As the public domain "clock", if you will, is moving forward a year every year now, I think sites like Newspaper.com will be adding more and more of these small-town newspapers and even bigger city newspapers as time goes along.

I look forward to the discoveries this will bring!