Based  on the evidence at hand, The Syndicator's last issue was for material intended to appear August 29 to September 4 1926. The Wheeler-Nicholson syndicate seems to have ended its business at or near the same time.

Here are two short items from Editor & Publisher that serve as the proof. In the September 4 issue (concurrent with the final week of The Syndicator) we find that Oscar Hitt, the syndicate's number one cartoonist, has left the company:

Oscar Hitt, formerly with Wheeler-Nicholson and the New York World Syndicate, is now handling his own comic feature. Associated with him is Maurice Workstel, art critic.

While that item isn't conclusive, by the November 27 issue there is no room for doubt in this short mention:

A.L. Brandt, formerly with the Wheeler-Nicholson Syndicate, now defunct, has joined the sales staff of United.

It's too bad that no publication I've found published a real post mortem about Wheeler-Nicholson, because that would make for fascinating reading, but the evidence in E&P, while terse, is definitive.

It seems almost incomprehensible that Wheeler-Nicholson's The Syndicator lasted a mere eight issues, but all evidence seems to point to that being true. Even if the concept was not the most brilliant to come down the pike, and the material lackluster, if it is true that the service was offered for a practical pittance, why did it not have even a slight brush with success?

But maybe that assumption is wrong. Perhaps the company could not in fact offer the material as cheaply as they claimed in their advertising. With investors being asked to shell out real money, labour and materials in service to producing The Syndicator, the syndicate may have had no choice but to over-reach on their prices. If that were true, it makes perfect sense that there were few takers. NEA and other blanket services were already pretty inexpensive, so if Wheeler-Nicholson couldn't compete on price, their wares were certainly not so fabulous as to make up for that.

There's also the possibility that Wheeler-Nicholson had the ability to produce the needed mountains of material snatched away. The blanket service had already imploded once at the beginning of January, so why couldn't that happen again? Investors, apparently primarily production plants, might have had Wheeler-Nicholson on a very short leash. After eight weeks they could have expected to see a stack of signed client contracts. When that stack came in too short, the plug was pulled. Alternatively, it could have been the creative personnel who pulled the plug. The company might have made promises to pay them once eight weeks of material had been produced and distributed, and they failed to come through.

If the Major had intended, as I believe he did, to leverage The Syndicator into a newsstand magazine, perhaps he could not pull that off in the very short time he had to put the plan into action, or his bid for newsstand distribution was rebuffed in some way that made it obvious to his investors that the plan was not going to work. It could well be that the plug was pulled not because the syndication wasn't immediately profitable, but because the other and more important phase of the business plan turned out to be a dead end. Could it be that what the Major learned from this experience were the lessons he needed to make his next foray into the newsstand magazine field, almost a decade later,more fruitful?

There is quite an irony to the timing of Wheeler-Nicholson, Inc.'s demise. I have to thank another of my brilliant readers and fellow researchers, Jeffrey Lindenblatt, for pointing this out to me.

If the company had held on just a mere half a year longer, a veritable wink of an eye in business, the syndication business was going to have a shake-up, one that could have offered a blanket service like Wheeler-Nicholson's a road to financial success. In April 1927, the New York Telegram, one of the ever-struggling second-tier papers in New York City, was sold to the Scripps chain. Scripps was the parent company of NEA, and so the newspaper contracted with NEA to provide their blanket service. In order to boost sales of the Telegram, NEA was instructed to consider this client paper to be on an exclusive contract encompassing a huge area around New York City.

NEA's blanket service, used by many small papers in the environs of New York City, was suddenly cut off. These client papers were all of a sudden in a frenzied search for material to fill their now empty pages. If Wheeler-Nicholson had managed to keep up their service until April 1927, they would have been able to sign a slew of clients in the New York - New Jersey - Connecticut area, easily enough to put Wheeler-Nicholson on firm financial footing.

Here's an example from the Yonkers Statesman of the sea change that happened in April 1927, all but one strip had to be changed from one week to the next: 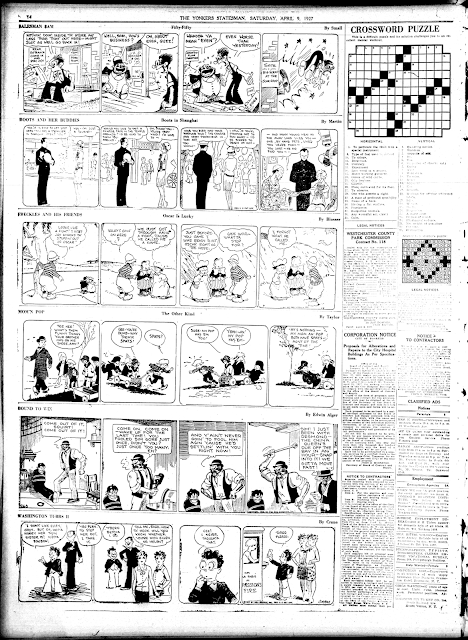 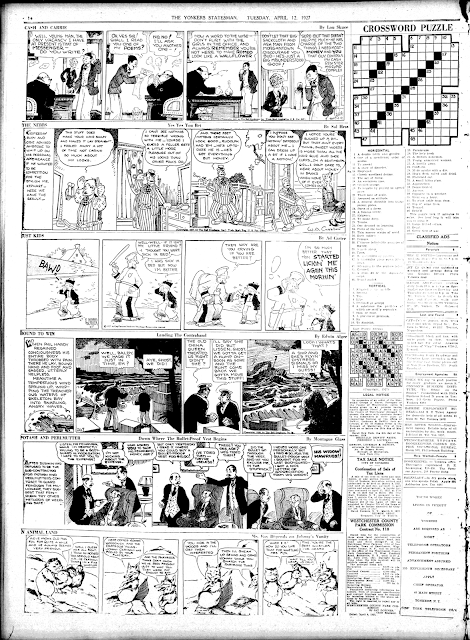 That's the end of our series about the Wheeler-Nicholson syndicate. If you come across any new information, you know I'm always eager to hear about it!

Index to this Series:

Part XII (M.A. Dunning: They Never Do This But Once, Maggie's Yiddish Moe)

Comments:
Thanks, Allan! A most informative series, with many questions to think about.