Obscurity of the Day: Felix and Fink

For a strip that lasted only about a year and a half, Felix and Fink sure has taken an outsized share of research to try to pin down its large variety of mysteries. But let's start with the not at all mysterious fact that this strip is about as bald a rip-off of Mutt and Jeff as one could imagine. Tall skinny guy? Check. Short fat guy? Check. Short fat guy is dumb as a sack of rocks and gets the tall somewhat more intelligent guy in trouble? Check. The two are partners in crime, or at least ne'er-do-well-ery? Check.

About the only thing missing from Felix and Fink compared to Mutt and Jeff is the humour brought to the latter by Bud Fisher. Whatever we might think of Fisher's work ethic and his use of ghosts, it has to be admitted that the strip was quite a hoot in its early days, the oughts and teens. Felix and Fink on occasion can get a laugh out of me (the cop's secret beer provider gag, for instance, is ably done), but usually the set-up is sloppy, the gags creaky, the pacing awful and the dialogue inane. On the positive side, the art is delightful, though one might grumble that the artist is cribbing a lot from George Frink -- in fact Felix is pretty much the spitting image of Circus Solly/Slim Jim.

But let's get on to the mysteries. Felix and Fink bursts into being in a pretty decent number of papers, including major ones, in October 1911. As one of the earlier imitators of Mutt & Jeff, a very hot property at this time, it makes sense that a lot of papers that missed their chance to get the original were willing to take this second-rate copy.

The first strips we find in these papers seem to read like we are picking up an ongoing series. So for the longest time I assumed that Felix and Fink was created earlier and finally had a spurt of marketing to explain its new clients that month.

According to the tiny bits and pieces I can pick up, the North American Press Syndicate was originally based in Grand Rapids, Michigan, and was either a subsidiary or aligned somehow with the Grand Rapids Herald newspaper. That sent me off to review the Grand Rapids Herald, hoping I'd found Felix and Fink's home paper. The Herald is digitized, but only available on a painfully slow website, so I could not review the paper in depth. But what I found out is that Felix and Fink seems to have only run there on a few occasions, and not near the beginning of the syndicated run. That didn't necessarily mean that the strip wasn't produced there, but that the syndicate was not having all their material run in the Herald for whatever reason. I also didn't find other material in the paper (like editorial or sports cartoons) by the creator of Felix and Fink. If this cartoonist worked for the Herald, surely I'd find something by him ... but no.

Then I found a mention of the syndicate in Editor & Publisher saying that they were moving their operation from Grand Rapids to Chicago in May 1911. So probably the Grand Rapids Herald was a blind alley, and by the time Felix and Fink debuted the syndicate no longer had any ties to Grand Rapids at all.

On a tip from Alex Jay I checked the 1911 US copyright records. What I found is that C.N. Mather claims copyright to two dates of Felix and Fink, October 7 and 11. The earliest I've found the strip running is October 13, but that can easily be explained by a not uncommon lag between the copyright claim and the actual appearance in papers. But then things change, because the North American Press Syndicate claims copyright to a batch of Felix and Fink strips, the earliest of which is dated October 26.

So my guess based on all this is that the strip originated in Chicago, and was originally solicited and sold by this Mather fellow who had a number of features that he successfully peddled. Maybe Mather then went to work for North American Press Syndicate, or the syndicate bought the feature from him. But in less than a month, Felix and Fink was being distributed by that syndicate.

So did Felix and Fink have a home paper in Chicago? Well, the strip was in the Chicago Daily News from the apparent start. That's pretty weird because as I mentioned before, the strip's drawing style owes a lot to George Frink ... who drew his strips for that selfsame paper! But we'll get into the question of authorship later.

Back to the syndicate mystery. The syndication through North American Press Syndicate seems not to have lasted very long. As of the beginning of January 1912 the strip no longer carries a copyright notice at all. Going back to the copyright books, we find that copyright of the feature was next applied for in April, this time by the Ale-Ting Service of Chicago. This would prove to be the last copyright I can find for the strip. This odd name seems a little less odd when you note that the strip was signed "Ale Ting". This leaves me with the impression that this "Ale Ting" person began self-syndicating the strip at the beginning of 1912.

So now that we're presented with the name "Ale Ting", do we not have the creator of the strip? It's an odd name, to be sure, and one can search for it on the interwebs to no avail, but certainly that doesn't make it unique. Lots of creators have left a light footprint. But I am not the one who unravelled the mystery of "Ale Ting", so you'll have to wait for Alex Jay to weigh in with his Ink-Slinger Profile coming up next.

Before I sign off, though, let's put an end to Felix and Fink. It ended on May 25 1913, perhaps a victim to all the other Mutt & Jeff copycats that were coming online. In any case, some papers that lost the strip lamented its departure woefully. For instance, here's the announcement that ran in the Decatur Herald: 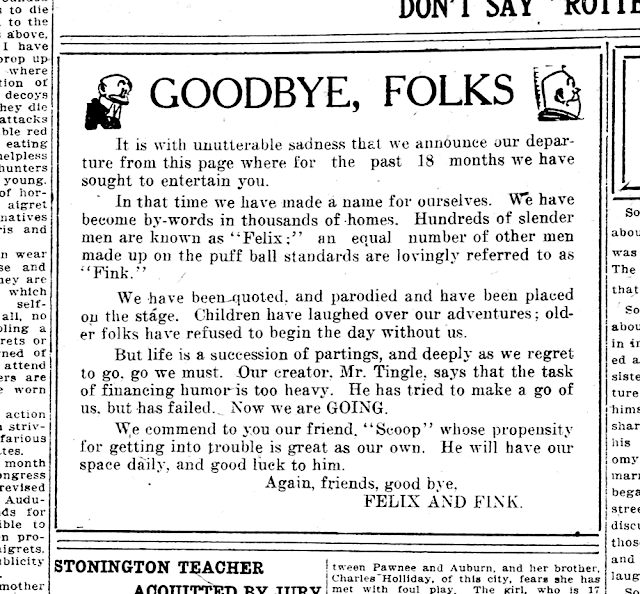 This announcement gives us a few tantalizing clues that may or may not lead anywhere.The fact that the announcment heralds the arrival of Scoop the Cub Reporter may have been something inserted by this paper, but if it was boilerplate sent out by the creator/syndicator, does that mean the feature was being syndicated by International Syndicate? They rarely put copyrights on their strips, so there's no strike of that nature against them.

The second clue I leave it for you to ponder, and Alex Jay will soon have something to say about it.

Comments:
Hello Allan-
These characters remind me more of Osgar and Adolph than Mutt & Jeff, and A & O, were modelled after Vaudeville stars Weber and Fields.

Hello again-
It would seem that maybe the debut date is actually 12 October 1911, as the SYRACUSE JOURNAL ran it that day with a box on the front page announcing Felix and Fink would be at the World's Series, and to "Start" it on p.17. So it would seem the "series" series would be the launch strips.
A few days after the strip folded, this appeared in THE PERTH AMBOY (NJ) EVENING NEWS:

OBITUARY NOTICE
Died at their home, Felix and Fink, well known to readers of this and numerous other sporting pages, demise due to author's decision to discontinue drawing them.
(29 May 1913)