Obscurity of the Day: The Topps 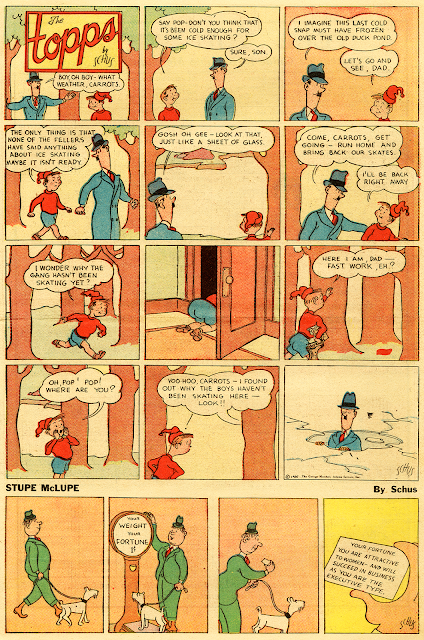 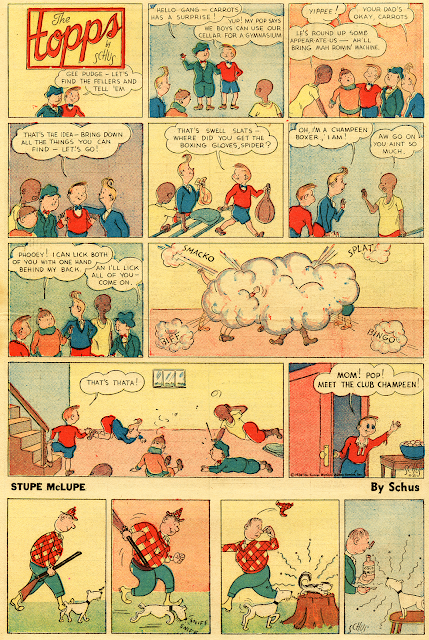 Adolph Schus had some success as a second string gag cartoonist; his work appeared in many national publications. But when he agreed to supply a Sunday feature to the ill-fated George Matthew Adams Service preprint section, he showed that whatever skills he had did not translate to that format. His strip was The Topps, accompanied by topper Stupe McLupe, and it is an embarrassment of bad writing and unappealing art.  Is it possible that a decent gag cartoonist could be so completely unable to transfer his expertise to this closely affiliated form? Or was Schus just so uninterested in the gig that he put no effort into it? Well, whichever it is, The Topps is eminently and happily forgettable. It was one of the features that ran for the whole short life of the comics section, July 5 1935* to April 4 1936**.

Comments:
Hello Allan-
"Stupe McLupe" has a contest to name his dog in late 1935-early 1936.Eventually,(8 February 1936)the dog's name is selected and incorporated into the feature's new name, "Stupe McLupe and Scratch."
"The Watchman," (Mattituck NY) is running The Topps as late as 3 February 1938, but as the syndicate identia is removed, it would seem these are reruns. They used some of the other GMA strips, and "Rod Rian" lasted until 17 February.

Hi Mark --
Yes, I should have mentioned that the GMA Sunday strips went through a bout of reprints in small papers in 1937-38. Most that I find seem to be under the banner of "Comics Feature Magazine", whatever that is.