March 8 1910 -- The match of the century is still four months away, but Jim Jeffries, who has been retired for six years and is extremely overweight and out of shape, announces that he will start training on April 1. Herriman suggests that Jack Johnson, who is in fine shape, should take Jeffries seriously and get to training himself.

The Little Tree That Talked: Day 3

The Little Tree That Talked: Day 2

It's that time of year again, kiddies, when Stripper's Guide rolls out our annual Christmas strip. Everyone gather around the warm glow of the Yule monitor and pour yourself a steaming mug of Christmas cheer.

This year we have a good one for you, too! Usually I spend most of my introduction apologizing for the series, but this one by Walt Scott, while a little sappy and tad preachy, has a lot going for it. And of course by that I mean Walt Scott's utterly sumptuous art. But even the story has its charms.

I am lucky to have the original syndicate proof folder for The Little Tree That Talked, so today you'll get to see the material that was sent out to newspapers for promoting this special series. The only problem is that my proof folder was missing one sheet of four strips, so I had to use much inferior newsprint versions from the Rocky Mountain News, whose printing presses were turning out really crummy printing quality at this time.  Ah well, beggars can't be choosers.

One final note about this series: can one help wondering if Charles Schulz read this story, and the concept of a scraggly little Christmas tree rolled around in his noggin until it popped back out for A Charlie Brown Christmas? 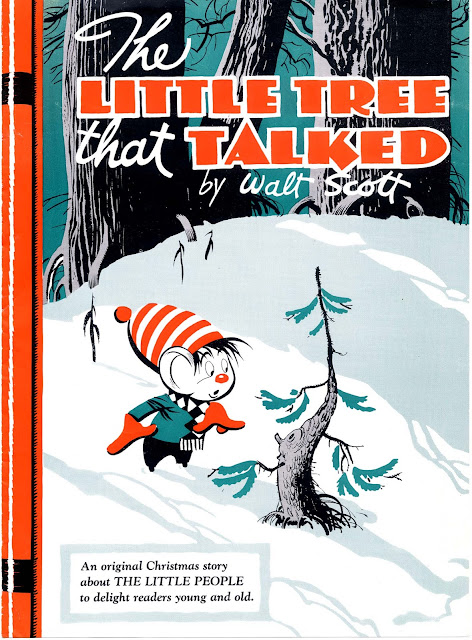 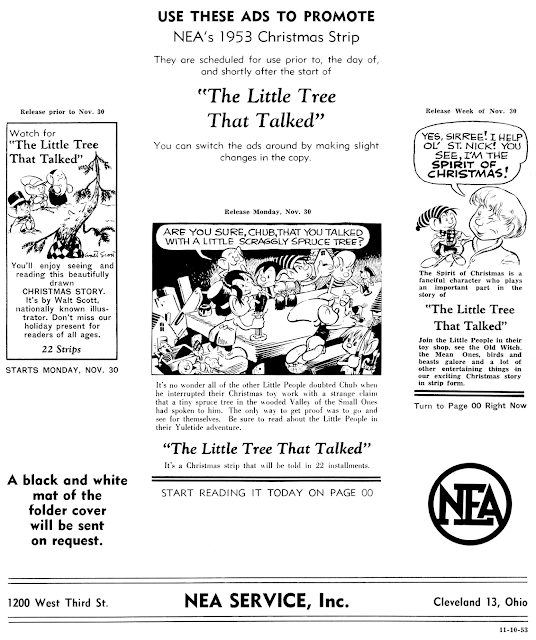 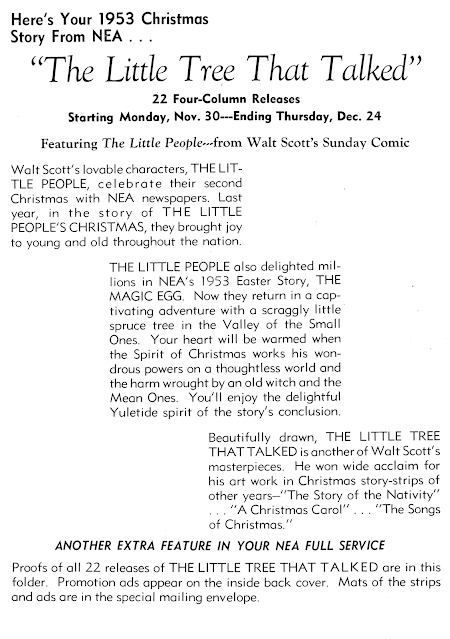 Obscurity of the Day: Mike and Ike - They Look Alike 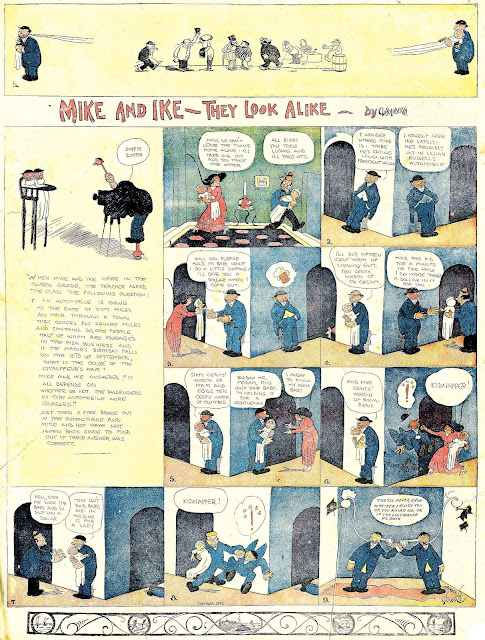 Today we think of Rube Goldberg as a cartooning institution -- in fact some think of the name as merely an odd term for overly complex inventions -- but there was a day when even the great man was struggling to make a good living.

Rube Goldberg's famed daily cartoons began in the San Francisco Bulletin, then he moved to the big time at the New York Daily Mail in 1908. He was a sports cartoonist at this time, but soon he became far better known for the running gag series that he tacked onto his main cartoon. Foolish Questions, in particular, caught on like wildfire. But being syndicated by such a minor paper (by New York standards), Goldberg faced an uphill battle for nationwide recognition, and more importantly, the moolah that went with it.

Presumably with the blessing of the Daily Mail, Rube shopped himself around to do Sunday series with various syndicates. In his early years he had series published by World Color Printing, the Chicago Tribune, and the McClure Syndicate.

For McClure he produced Mike and Ike - They Look Alike, a series about incredibly dumb yet wildly imaginative twin brothers. The twins were originally created for a short-lived series he penned for World Color Printing in 1907 calleed The Look-a-Like Boys.* McClure was running on fumes when Goldberg offered his services in 1913, so they were probably dancing in the hallways to have him on board. Yet in the period that they had Rube, the McClure Sunday colour sections only seemed to shed clients at a faster and faster pace. It wasn't Rube's fault, though -- Mike and Ike - They Look Alike was vintage Goldberg, crazy, bizarre, whipsmart and often side-splittingly funny. How McClure managed to make lemons out of that lemonade I cannot fathom.

Mike and Ike - They Look Alike ran in the McClure Sunday colour sections from March 9 1913** to February 1 1914***, not even finishing out a one year contract.

* Don Markstein says the characters date back even earlier, to Rube's San Francisco Bulletin cartoons, but I have no proof of that, and sadly the Bulletin doesn't seem to be online.

Wish You Were Here, from a Grace Drayton Imitator 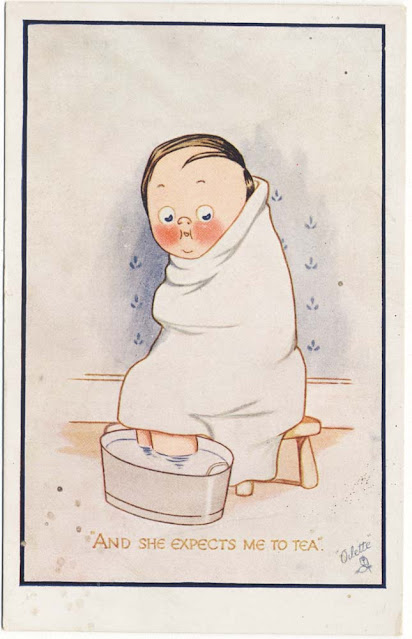 There were lots of imitators for the royalty of women cartoonists -- Rose O'Neill and Grace Drayton --  and the normally very classy Raphael Tuck Co. stooped to employing one of those imitators for their Oilette series titled "All For Her." This series of cards featured baby versions of henpecked husbands, drawn in the style of Grace Drayton. This one is coded #8639.

My card is postally unused and undated, but according to collectors this series was issued in 1913, and the artist on the Drayton copies (there are some in other styles) is believed to be T. Parlett. Tuck's Oilette series was so named because they were supposed to be the quality of miniature oil paintings; which makes this cartoon series seem a strange one to have under that umbrella.