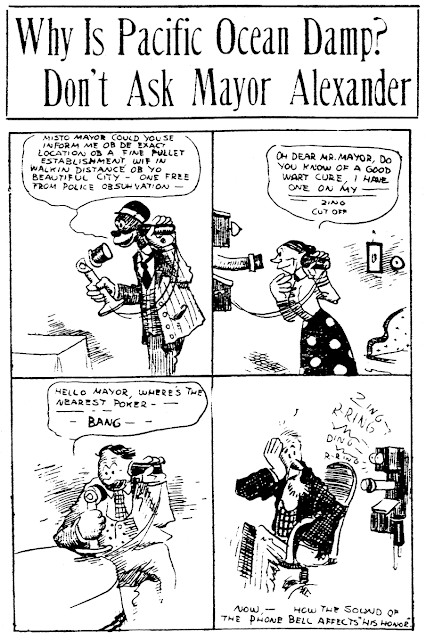 March 25 1910 -- Mayor George Alexander of Los Angeles complains that he is bothered all day long with phone calls from his constituents, asking questions as if he were some sort of, oh, I dunno, a public servant. Herriman has fun with it, but most of the actual questions cited in the accompanying article are not terribly unreasonabe. Examples offered include: Who are the lowest and highest paid city workers? Is there something the caller can legally do about someone who mistreats their dog? What is the current year's city budget?

Seems to me Mayor Alexander has no phone problem. What he has is a secretary problem. Aren't secretaries capable of handling, or at least rerouting, some of these mundane everyday questions?

Obscurity of the Day: Cheeverwood 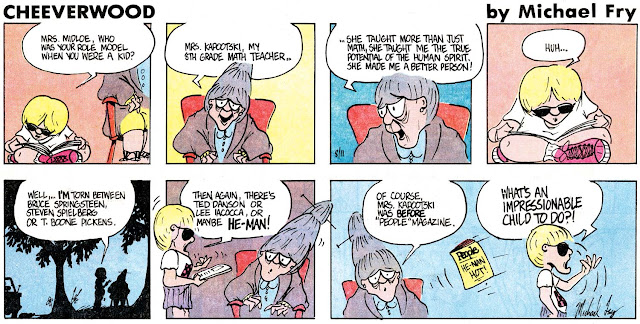 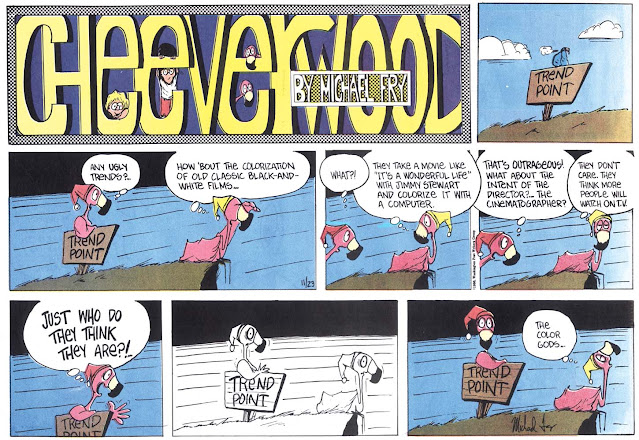 When Doonesbury became a big hit and then went on its at the time unheard of hiatus in 1983-84, the floodgates were opened for features to replace it. Bloom County started in 1980, well before this shake-up to the comics page, but it was this event that propelled it to center stage. Although I reject the common refrain of the time that Breathed's strip was some sort of Doonesbury rip-off, it can certainly be agreed that the two strips appealed to the same demographics.

But if Bloom County was in some way a copy of Doonesbury, then strips like Cheeverwood bear the ignominious mantle of being outright copies of the copy. And in the case of Cheeverwood, the resemblance is not just the intended audience demographic but in just about any aspect of the strip you care to name. Everything about the strip is similar: the setting, the characters, the snarky humor, the pop culture references ... they both even offer birds as characters! The art style, while nowhere near as competent as Breathed's, is certainly cut from the same cloth. In short, Cheeverwood is the Bloom County your paper could buy if the competition already had Bloom County.

I generally try to be as positive as I can about features of living creators, but my hope is that since Michael Fry has gone on to significantly bigger, better and more original things that he's probably not apt to have his feelings hurt about this early outing. He can certainly be very proud of When I Was Short, a wonderful feature that didn't quite click enough to make the bigtime, and the juggernaut Over The Hedge has become a lasting favourite, and deservedly so.

Cheeverwood debuted on July 1 1985* through the prestigious auspices of the Washington Post Writers Group. It was based on Fry's earlier strip Scotty, which was a local feature of the Houston Post starting in 1984. Cheeverwood seems to have been cancelled as of July 26 1987** after failing to take hold with many papers. The local Scotty apparently continued through sometime in 1989. If anyone here has access to NewsBank, which has the Houston Post archives, I'd be delighted if you can supply definitive start and end dates for that strip.

Obscurity of the Day: Oh Thunder

Robert W. Satterfield, long-time editorial cartoonist for the NEA syndicate, included a little bear as a mascot in his cartoons. The bear was never named, but came to be closely identified with Satterfield.

In June 1915 the syndicate assigned him the task of a comic strip based on current events, to which he appended a little single panel cartoon titled Oh Thunder and which starred his little bear. The earliest I find it printed is June 18 in the Evansville Press. In less than a month the current events strip seems to have been deemed too much work, and its space was shrunk and reassigned to a rhyming strip now starring the little bear, retaining the title Oh Thunder. The strip started as a two-panel affair, then increased to four panels. It was close to a daily but was sometimes dropped, presumably when Satterfield had bigger fish to fry in getting out editorial cartoons.

I imagine newspaper readers who were initially excited to see Sat's little bear character starring in a comic strip doused their enthusiasm when they read the really quite awful rhymes that were offered. I actually chose the above samples because they were the cream of a crop that I looked through, believe it or not.

Oh Thunder came to an end on October 21 1916*, presumably unmourned by creator and readers.

Of more interest than this strip, to me, are the comings and goings of Satterfield in this era. In spring 1914 he advertised that his editorial cartooning services are distributed by himself, via the R.W. Satterfield Cartoon Service**. Evidently that means that he had split from NEA.  In later 1914, he is reported by several paper to be quite ill and unable to produce his cartoons -- whether he is still self-syndicating isn't mentioned in the reports I can find. Then in the May 1915 edition of Cartoons Magazine reports that Satterfield has accepted a position with the Sandusky Register. By June, though, he's back to producing cartoons, including today's obscurity, for NEA. Whew, what a whirlwind! 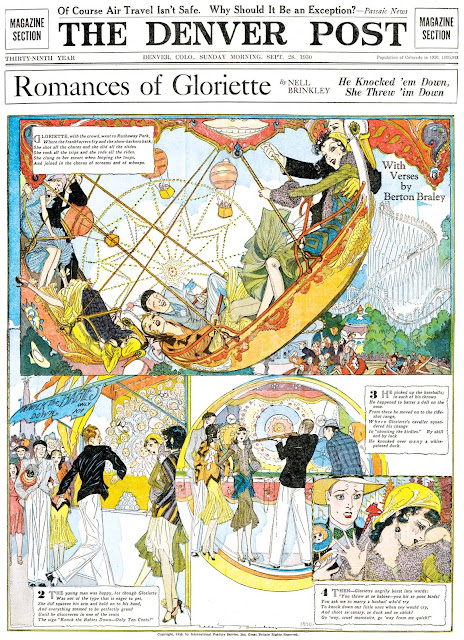 Nell Brinkley was a regular contributor of Hearst magazine cover series, even though she seemed to be kept plenty busy on the weekday romantic cartoons as well. You'd never know she was overworked, though, when you look at the amazing design work that went into pages like this one from The Romances of Gloriette. Seriously, embiggen this cover and just marvel at that top panel especially.

The story told in verse is supplied by Berton Braley, and it's the standard romantic girl-spurns-boy-until-she-doesn't business. This series, distributed through Hearst's International Features Service arm, ran from August 10 to November 16 1930. 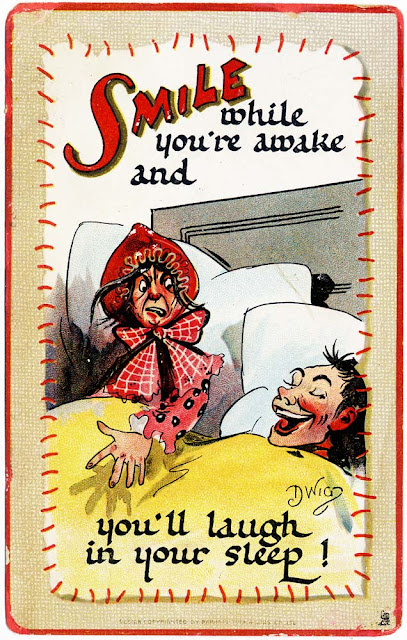 Here's another Dwig card from Tuck's "Smiles" series, #169. Dwig liked to make up these sentiments that probably made perfect sense to him, but they often leave me scratching my head.