May 12 1910 -- May is a good time for Herriman to be dreaming about a pennant run fot the local Pacific Coast League teams. Once the season gets rolling all thoughts of glory will be filed away as "just wait 'til next year!"

In fairness the Vernons did have a decent season, coming in with a positive win-loss record, they were just way outclassed by other powerhouse teams. The Angels, though, stunk up the joint. They did manage to not to end up as the worst team in the league; the laughably bad Sacramento team saved them from that dishonour.

Obscurity of the Day: Mommy 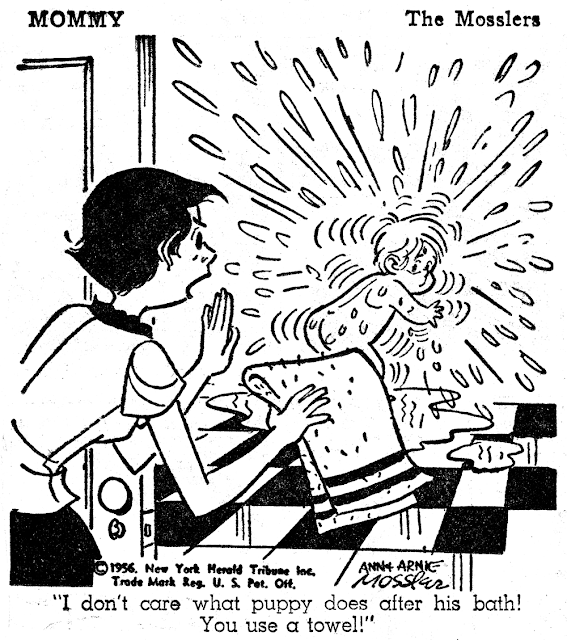 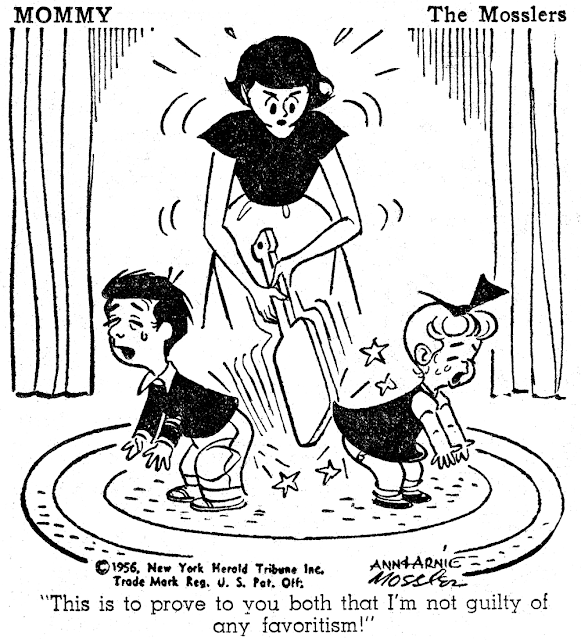 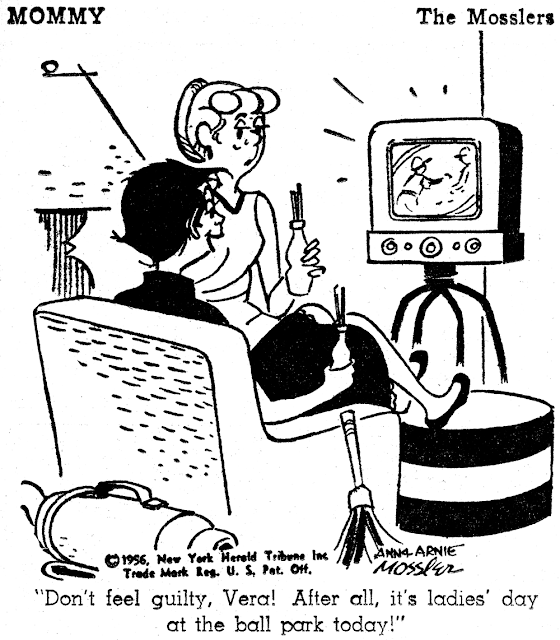 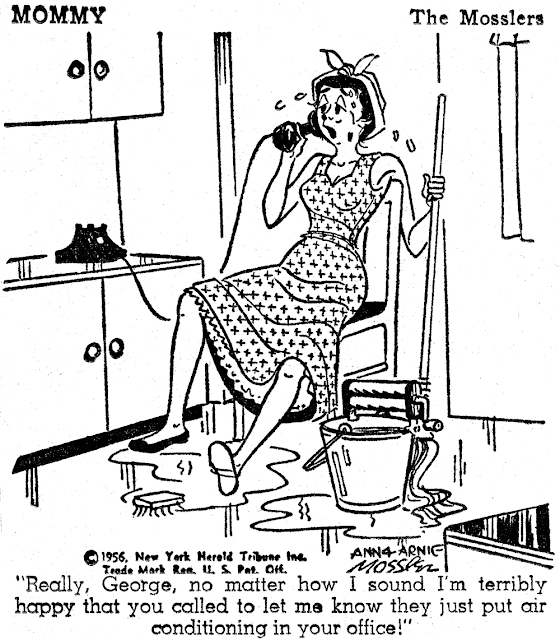 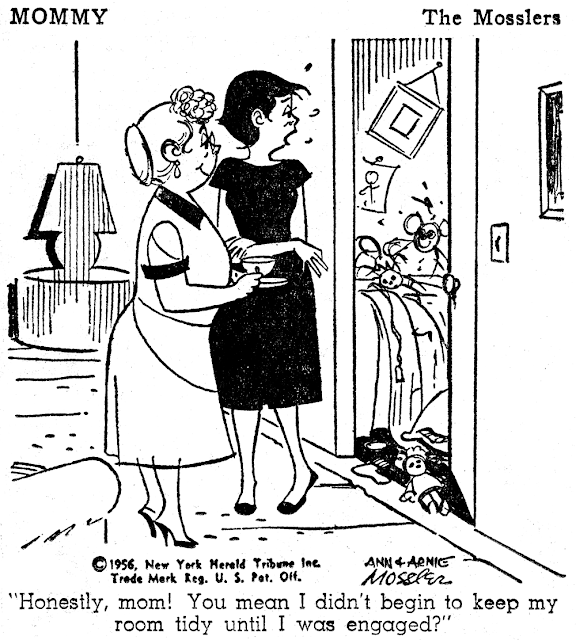 Here's a panel that seems like it should have succeeded, if only because it offered a different perspective than just about all the other stuff editors could buy in the mid-50s. The panel Mommy was about a stay-at-home mom, and unlike glamourpusses like Alice Mitchell and Blondie Bumstead, she seemed pretty real -- she was overworked, overtired, not at all amused by her kids' 'cute' antics, and never wore high heels and pearls to do the vacuuming. In short, here was a panel that would appeal to all the newspaper readers who fit that mould, which was most of the middle-aged women of the developed world.

So what could go wrong? It certainly wasn't the art, which was by Arnie Mossler who offered up a more than competent 1950s modern and vibrant style. And it wasn't the gags by his wife Ann Mossler, which hit more often than not, and came across as real, not manufactured by some cigar-smoking gag-writer. At this point I'd be giving the stink-eye to the syndicate, which being the New York Herald-Tribune, with the most infamously inept sales force of all the majors, would seem like the obvious place to point the finger. But to my surprise when I look around on newspapers.com, I see that the panel started with what appears to be a healthy enough client list, and those clients didn't all get shed early on. In fact, it isn't until a good year and a half into the run before the clients start dropping like flies. Why? I just don't know. It's a head-scratcher.

Mommy began on March 21 1955* and ended just about exactly two years later, on March 30 1957**. Arnie Mossler had several syndicated features before and after this, but Mommy was the only occasion on which he teamed up (or at least credited) his wife Ann.

Comments:
My first reaction to it, while just scrolling down and reading the panels, and before you posted your puzzlement, was that it was simply unpleasant. Nobody is smiling, there is no evidence of love or affection, there is no fun displayed. "Mommy" is haggard, unhappy, clearly overworked and we never even see her husband. It's a portrait of mid-50s middle-class misery, and I am reminded of my own mother, who ultimately attempted suicide. It's as lightweight as an anvil.

Can You Identify the Mystery Cartoonist? 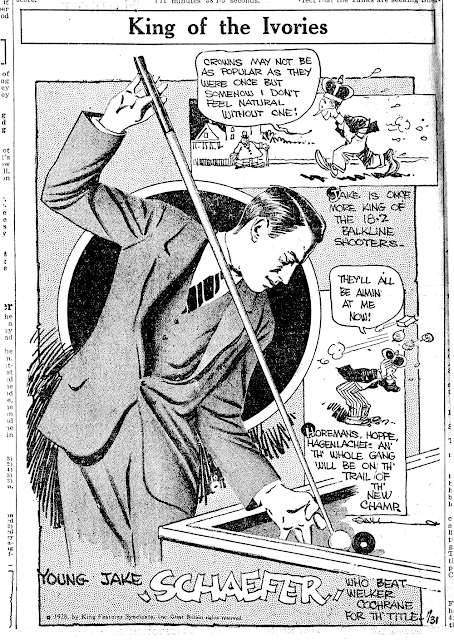 The Stripper must be getting old and addle-pated, because I feel like I should know who this is. This sports cartoon ran in the February 6 1928 edition of the Atlanta Georgian, a paper that I just clipped up for its cartooning content. As I was clipping this cartoon out, I was just assuming it would be by Feg Murray. But then I looked at the scrawl of a signature, and that sig sure isn't his.

The style seems sort of familiar, in a generic sorta way, and this was no minor local cartoonist since he was syndicated by King Features, but my neurons refuse to fire properly. Help!

Comments:
It reminds me of Quinn Hall.

Mark -- If there were no sig I could easily be convinced this is Quin Hall. But Quin had a consistent sig he used, so ... ?

Paul -- If Sords swiped it, he could have saved us a lot of trouble and added an "apologies to" line.

There is a signature. Just under 'th new champ' looks like a Q to me. DanB

Will Gould is another good guess based on him being a sports guy for Hearst at this time. But he also had a very identifiable signature (block letters enclosed in a box on box arrangement), and the sig on this cartoon is nothing like that. 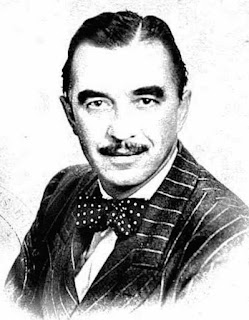 1947
Henry William Reusswig Jr. was born on July 22, 1902, in Somerville, New Jersey, according to his World War II draft card.
The 1905 New Jersey state census said Reusswig, his parents and older brother were residents of Bridgewater Township of Somerville, New Jersey at 154 Cliff Street. His father was a druggist.
The 1910 United States Census recorded Reusswig, his widow mother and brother in Utica, New York at 371 Genesee Street. His mother was a vocal teacher.
According to the 1915 New York state census, Reusswig’s mother had remarried to Norton J. Griffith who owned a canning company. The family of four were Utica residents at 8 Greenwood Court.
In the 1920 census, Reusswig was at the same address and had a half-sister.
Reusswig graduated from Amherst College in Massachusetts. He was in the class of 1924.

Reusswig to Wed in New York Church
New York, Nov. 8.—St. Agnes’ Church in New York City will be the scene of the wedding on November 15 of Henry William Reusswig, twenty-five, an artist, a native of Somerville, the son of Henry and Edith Norton Reusswig, and Miss Martha Louise Sawyers, twenty-two, also an artist, who has a studio at 360 West Twenty-second street, New York City. The couple obtained their marring license here yesterday. Mr. Reusswig’s present address is 215 West Thirteenth street, New York City. Miss Sawyers was born in Corsicanna, Texas, the daughter of Alie and Inez Sawyers.

On November 16, 1927, Reusswig married Martha L. Sayers in Manhattan, New York City. Evidently they honeymooned in Europe. On December 30, 1927, the newlyweds were aboard the steamship American Banker when it departed London. They arrived in the port of New York on January 9, 1928. The passenger list said their address was 360 West 22nd Street, New York City.
Reusswig was a self-employed artist in the 1930 census. His address was 110 East 84th Street.
Reusswig painted many pulp magazine covers. Redbook, January 1934, published a photograph of Reusswig at work. His illustrations for “We’re All a Year Older” begin here. 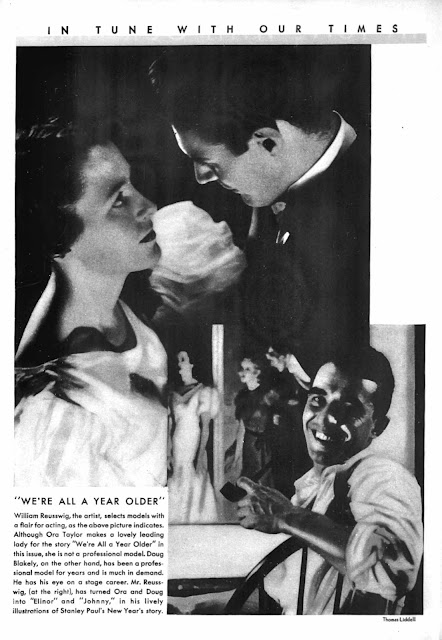 On August 26, 1937, Reusswig and his wife arrived in San Pedro, California from Yokohama, Japan.
The 1940 census enumeration counted Reusswig and his wife in Manhattan, New York City at 71 East 77th Street.
On February 15, 1942, Reusswig signed his World War II draft card. His address was 434 East 52nd Street in Manhattan. Reusswig was described as five feet nine inches, 172 pounds, with brown eyes and hair. He enlisted in the New York Guard Service on June 24, 1943 and was assigned to Company B, Seventh Regiment.
American Newspaper Comics (2012) said Reusswig, in 1944, drew the Book-of-the-Month adaptation of Paris Underground by Etta Shiber. He started Book-of-the-Month’s Tarawa by Robert Sherrod and completed just six strips. The remaining eighteen were by John Mayo. Both series were from the King Features Syndicate which offered Reusswig the opportunity to document the war in Europe. So, Reusswig left Tarawa and packed his bags for Europe. Apparently Reusswig’s full-page drawings began on August 13, 1944 in the Pictorial Review of several newspapers. During the series, Printers’ Ink, June 29, 1945, published an advertisement with a photograph of Reusswig. 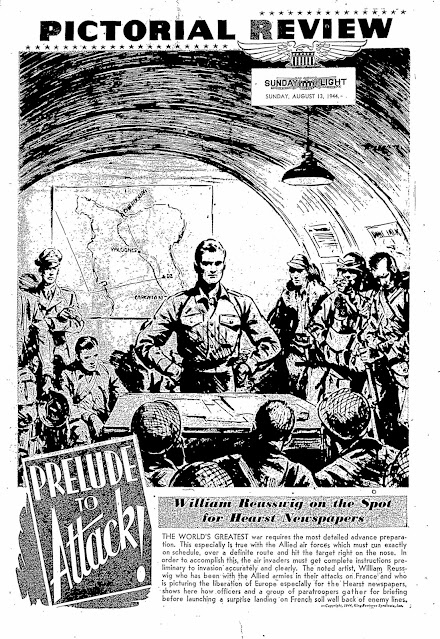 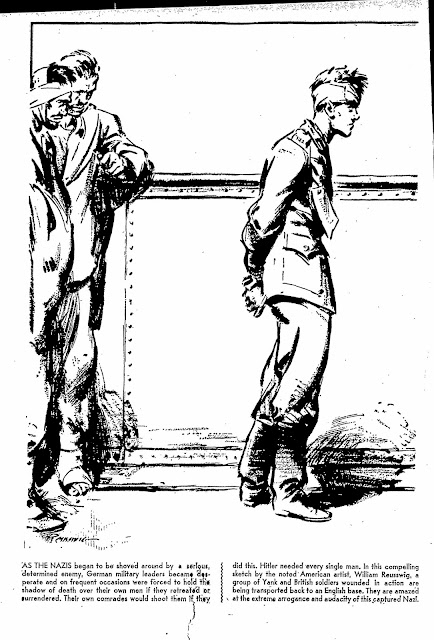 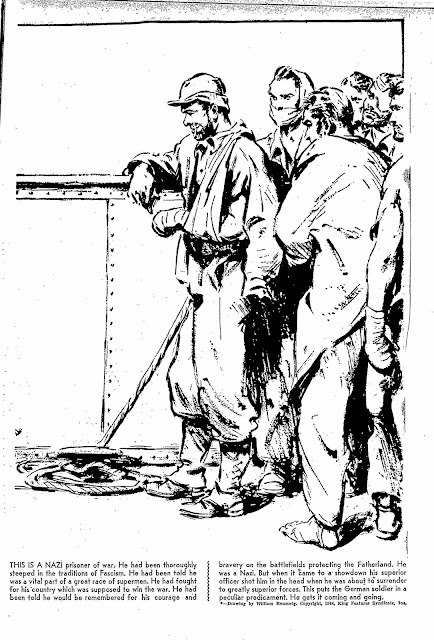 Reusswig was mentioned in The Greenwood Library of American War Reporting Volume 5 (2005).  Reusswig returned to the U.S. on December 25, 1944 at Washington, D.C. He flew on an Air Transport Command plane.
In early 1945, Reusswig went to the Pacific Theater to continue documenting the war for King Features. Apparently his first set of drawing appeared August 5, 1945 and last set November 11, 1945 (below). 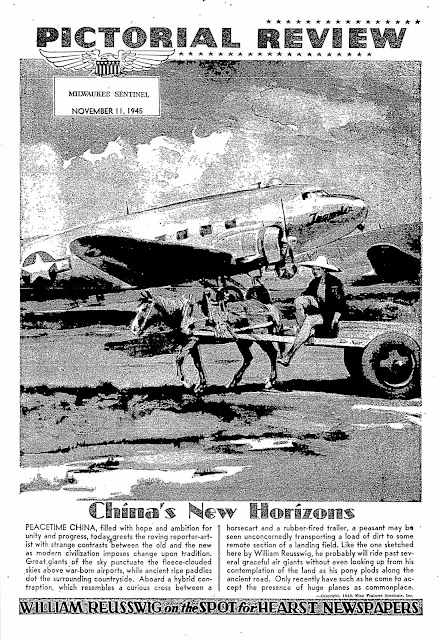 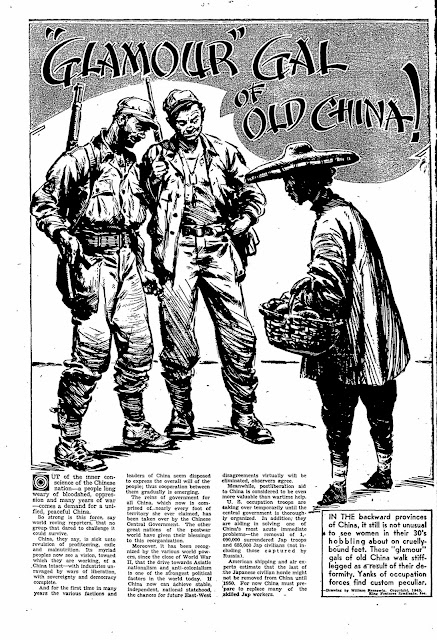 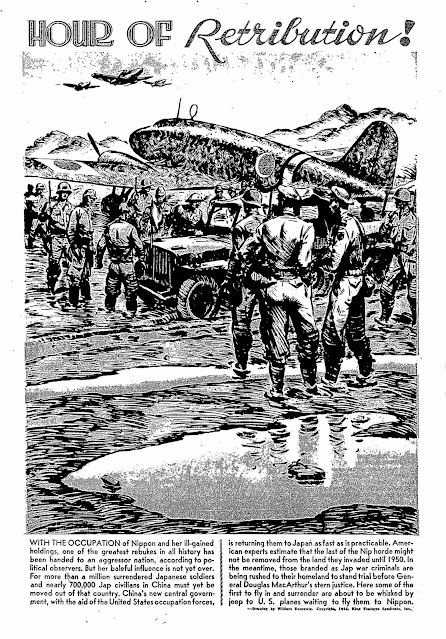 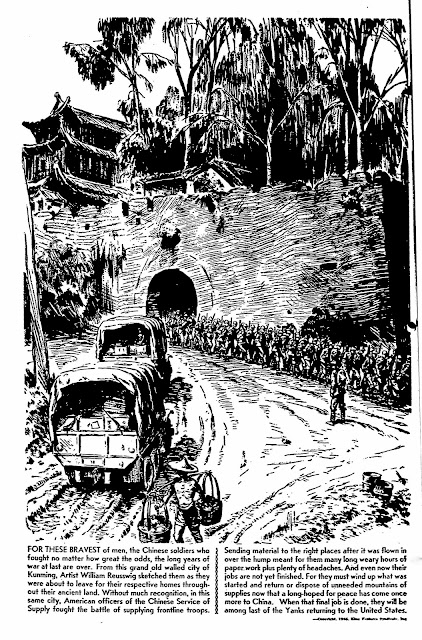 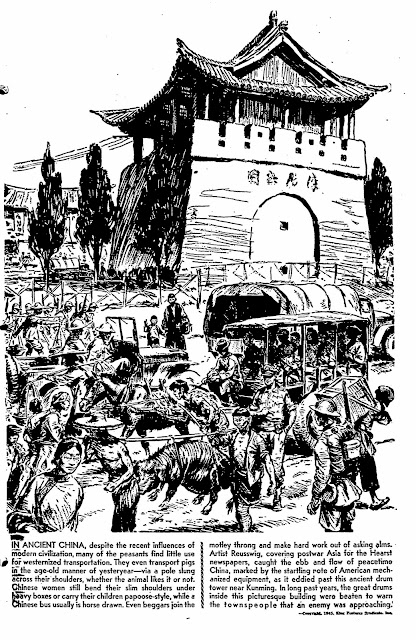 On September 22, 1945, Reusswig and his wife, Martha Sawyers, were aboard the S.S. Topa Topa when they departed Calcutta, India. They arrived in New York on October 20, 1945. She was a WAC captain and war correspondent for Colliers in India.
The 1950 census said Reusswig and his wife lived in Manhattan, New York City at 434 East 52nd Street. He was a freelance magazine illustrator.
Reusswig passed away on June 22, 1978, in San Antonio, Texas. An obituary appeared in the Victoria Advocate (Texas), June 23, 1978.

Graveside services for Henry V. Reusswig, 76, San Antonio artist and writer, will be conducted in Hillside Cemetery at 3 p.m. Friday. The Rev. John II. Bert, pastor of Grace Episcopal Church, will officiate. Burial will be under the direction of Freund Funeral Home.
Mr. Reusswig died at a San Antonio nursing home Thursday. He was a member of the Illustrators Club and the Artists and Writers Club of New York City, the National Academy of Fine Arts and Phi Delta Theta.
Mr. Reusswig, a graduate of Amherst College, was born in New Jersey, July 22, 1902, son of Ernest and Edith Reusswig. He married Martha Sawyers in New York City in 1927. Survivors are the wife; a sister, Mrs. Aurelia Batty of Arlington, Va., and a brother, Norton Reusswig of New York.

Comments:
Martha Sawyers, Reusswig's wife, was also a successful painter and illustrator. While an art student in New York an attack of wanderlust led her to move to Bali, where she painted the Balinese people. A gallery exhibit of her portraits led to a job as an illustrator of "Asian subjects" for Colliers magazine. During WWII she painted morale posters. She and her husband continued wandering the Far East and collaborated on two illustrated books. Here's a biographical outline at the Cuero (Texas) Heritate Museum: 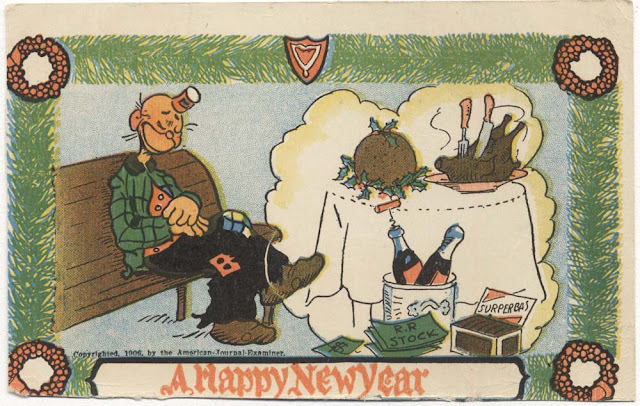 Comments:
Suddenly recalling Feiffer's book of president cartoons. In the preface to the Gerald Ford section he explains he always drew a little can atop Ford's head because Feiffer equated him with Happy Hooligan. A very obscure reference even then, although the can was made sort of relevant with the letters WIN for Ford's "Whip Inflation Now" motto.