Obscurity of the Day: Duke 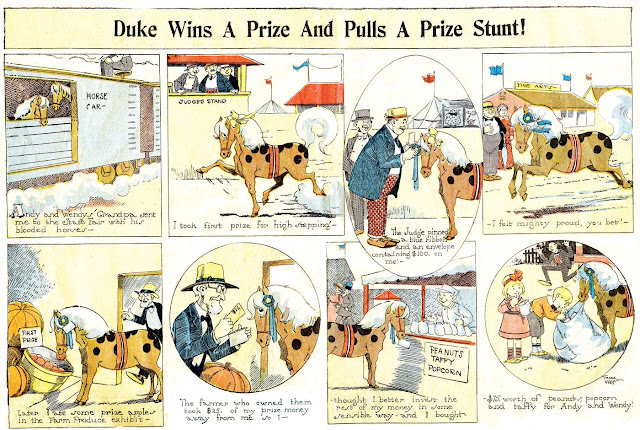 By 1913, World Color Printing's Sunday comics section was, other than the wonderful front page Slim Jim strip, consisting of two pages of strips shared with the Philadelphia Press, a half page activity feature, plus just one original half page strip. Unfortunately, that extra half page was often wasted on Duke, a pretty awful strip about a pony. In fairness, it was obviously aimed at the littlest kids, and so we can't exactly expect Twain-level humor.

When Duke debuted on May 25 1913, it was credited to "Rutledge", which I have previously believed to be a WCP house name, and the strip was drawn reasonably well. Soon, though, it was signed by Frank R. Leet, starting August 24. Leet was a wonderfully funny cartoonist in his golden days at NEA in the 1900s, but by the time he landed with WCP in 1913 he seemed to be losing his touch. I suppose it doesn't help any that he was working on a strip with a star that he couldn't draw. You might notice that Duke is drawn in the same flat profile in every panel --- Leet seemed practically incapable of drawing a horse in any other perspective.

BUT WAIT! Alex Jay, once again doing the service of taking my foot out of my mouth, has pointed out to me that 'Rutledge' is Frank Leet's middle name! That means it was Leet all along. Unfortunately I don't have a 'Rutledge era' Duke strip handy to show you, but here's the debut episode from hazy digitized microfilm: 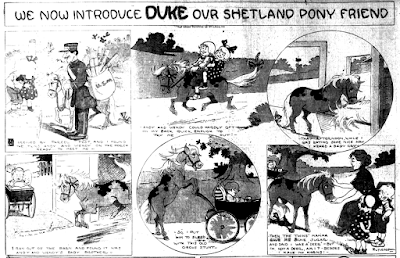 I think you can see why I guessed they were by two different cartoonists. While the early Duke was certainly no masterpiece, the strip and the horse in particular were certainly better drawn at the beginning of the run. Evidently Leet got lazier during his tenure on Duke, and decided that perspective was an extra added attraction that his audience could do without.