Obscurity of the Day: Ticklers

From the 1920s into the 1970s, NEA offered a 'pony service' to small weekly papers. This was the cheapest option they offered, and even then many weeklies were too poor to afford it. Nevertheless, despite anemic subscriber lists, NEA doggedly continued to make it available. It's offerings, at least as far as comics go, were  rarely seen, though some of them were quite creditable. Ticklers, a gag panel, was offered for a very long stretch to the pony service subscribers, and usually offered some pretty darn good art, if not the snappiest gags. But since it appeared only in minor weeklies, notorious for not running material when it was intended, and the NEA archives themselves are spotty in their pony service material, dating is a bit of a challenge.

Ticklers seems to have debuted on June 30 1941, sporting art by a fellow named John Sunley. His grease pencil artwork was a little reminiscent of George Clark, a fellow NEA staffer. Only problem was that Mr. Sunley lasted a mere two weeks on the newly minted series. Starting on July 14 1941, the reins were passed to Bob Moyer.


Moyer also had a nice style, in his case somewhat like NEA staffer George Scarbo. He made it all the way to sometime around January 1942, when a fellow named Bill Arnold got his shot at pony service stardom. 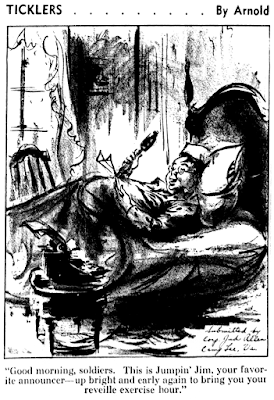 Bill Arnold, who I know absolutely nothing about, was another grease pencil aficionado.He spent a short time on a few minor NEA features, offered up some lovely work, and then disappeared. He ran the Ticklers concession from sometime around January to around March 1942. Next was a return engagement by Bob Moyer, who filled in for a few weeks, and then William Hayes took over on March 23 1942. 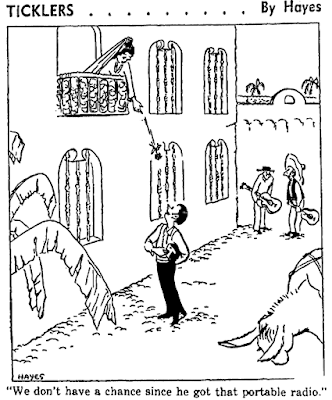 Hayes was by far the least artistically accomplished of the Ticklers crew, though on occasion he could ratchet his work up a notch. Unfortunately this generally coincided with him swiping from magazine gag artist George Price. Hayes had a couple of recurring sub-titles for his panels; Museum Pieces featured gags about dinosaur skeletons in a museum, and Spot 'n' Speck were a couple of bugs. 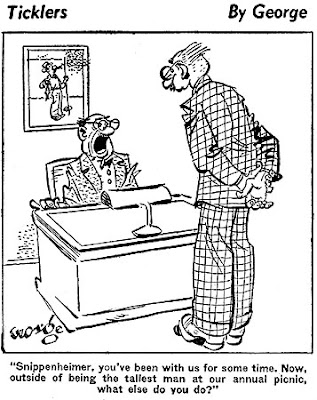 Hayes ran the show until June 26 1944, but during that stretch there was a six month hiatus from April 12 to October 18 1943. When Hayes left, NEA had the good sense to put a bullpen stalwart on the job. The great George Scarbo took over (as just 'George'), and started his long tenure by trying to turn Ticklers into a more memorable feature by retitling it G. Willikers. That dog didn't hunt, as they say, and the title reverted to Ticklers on August 14, barely a month and a half into the experiment.

In 1945, Scarbo tried again. On June 11 he retitled the feature Looney Luke and added a continuing character. This experiment also failed, and the title reverted after only four installments to Ticklers on July 9. From then on, Scarbo no longer rocked the boat. For the next decade and a half, he produced a weekly Ticklers cartoon for his vanishingly small weekly audience. The feature was finally put to bed for good in 1960. The NEA archives are  too spotty on the pony service by then to offer an exact end date.

Comments:
Kind of sad that Scarbo did all that work for years and practically no one saw it.