Obscurity of the Day: Ain't It Just Like a Woman? 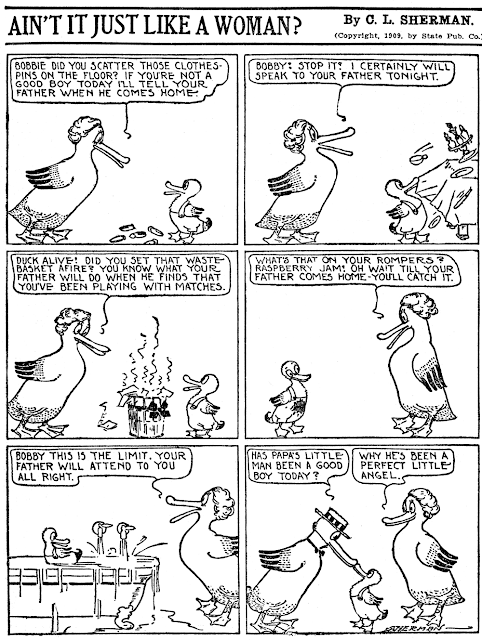 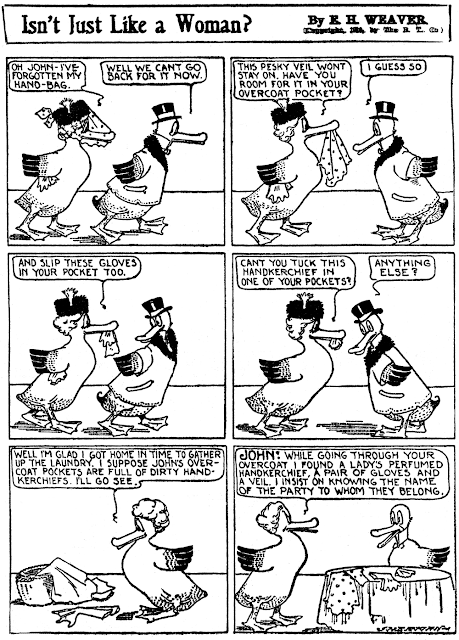 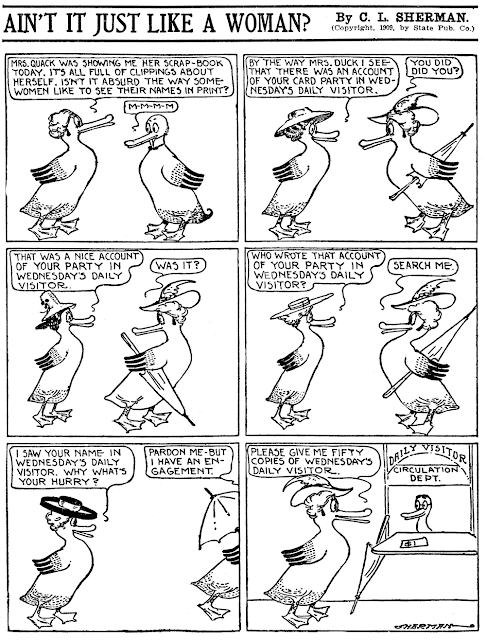 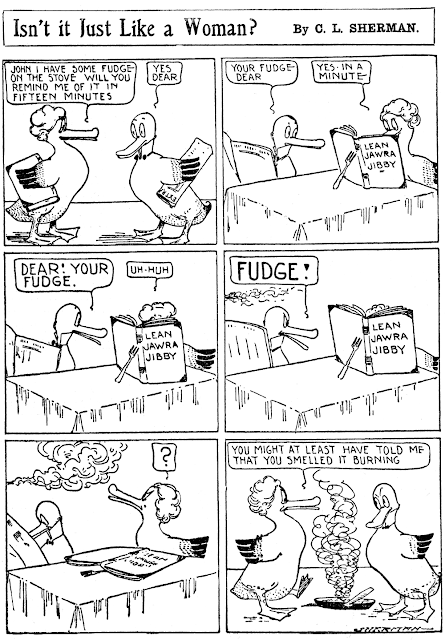 C.L. Sherman, one of the mainstays of the Boston Traveler's cartooning bullpen, wasn't the strongest delineator of the human form, so his comic strips tended to star animals. In Ain't It Just Like a Woman?, ducks are the animal of choice though they don't really figure much into the gags.

The foibles of women are a favorite subject of cartoonists, and Sherman found no shortage of gags to mine with this series, which ran in the Traveler and in syndication as one of his weekday strips from January 1 1909 to February 24 1910, a respectable run for those days.

In October 1909 Sherman had an attack of good grammar and changed the title to Isn't It Just Like a Woman? for the remainder of the series.

PS -- the byline on the second example to E.H. Weaver is a mistake; he was another cartoonist in the Traveler's bullpen, but he did not work on this series.

PPS -- can anyone explain the gag book title in the bottom example to me? I just can't make anything sensible out of "Lean Jawra Jibby".

Comments:
Hello Allan-
The "Lean Jawra Jibby" on the book is ham handed parody on the name of Laura Jean Libbey, (1862-1924)authoress of mushy but popular women's novels such as "A Dangerous Flirtation" and "A Forbidden Marriage", and later, an advice to the lovelorn column in the NY Mail called "Cupid's Red Cross."
I notice several of these examples have the credit line "State Pub Co." which indicate they are from the St.Louis Star, which for some reason, assumed the copyright on the Traveler material they ran, though, ironically, the miscredited Weaver one does have the original "B.T." identia.

Wow, even if I had one of Libbey's novels on my nightstand I don't think I would have been able to connect those dots. Nice catch, Mark.

Although the ST Louis Star may have also used that name, State Publishing Co. was indeed the sometimes used name for the Traveler's syndication arm. I've seen that copyright appearing in the Traveler itself.

Hello Allan-
The Star's corporate name was "State Publishing Company" for years before the Traveller stuff, The earliest Daily Stars I've seen were after the Eksergian, et.al. material and the early WCP section. That would be in about September 1905, when they dropped a Sunday ish and took the weekday NEA syndicate for three years. Then they had the Traveller features for a year and the took Hearst dailies and a new sunday edition with a Hearst comic section. I go on about it here to establish there wasn't any chance of a Traveller newspaper chain. If you recall the traveller in those days, it was a very "respectable" paper, (i.e. BORING)
If the Traveller used it's "State Publishing" name, why would some series have the "B.T." designation?

Hi mark --
This is an interesting question, but I'm not finding much anything to shed any further light.

I did some web searches and could find no citations of a State Publishing Company associated with either the St Louis Star or the Traveler, so that's a research dead end for now.

Is it your belief that the Boston paper was syndicating its material through the St. Louis Star, or are you working on some other hypothesis?

No, actually it's a damfino. The Star felt a need to replace the actual copyright line, obviously that being the "B.T." designation. The Star took the Traveller stuff for one year, July 1908 to June 1909. Before that, the NEA material never had any identia to mess with, and were left alone. When they took Hearst features , they couldn't touch the copyrights. Why they would do that to the Trav's toons I can only guess, it may be some obscure law where they had to recopyright them, or maybe they had exclusive Missouri rights to them, and needed to do it that way.
I've found strange anomalies in the handling of copyrights like that. Some papers inferred that their strips were of their own doing... Gasoline Alley was "Drawn for the Spokesman-Review by King" (though the C.T.'s imprint would remain), or a strange subjective one,like the Janesville (Wisc.) Gazette had across the title border of Bringing Up Father for about ten years in bold letters where a subtitle might go, a 1920 copyright. And a real pain in the neck, papers like The Philadelphia Inquirer, years after their syndicate ended, and Hearst's evening Milwaukee paper, The Wisconsin News, ERASED all copyrights. why would that be done? That always nabbed my nanny.