Obscurity of the Day: The Marsoozalums 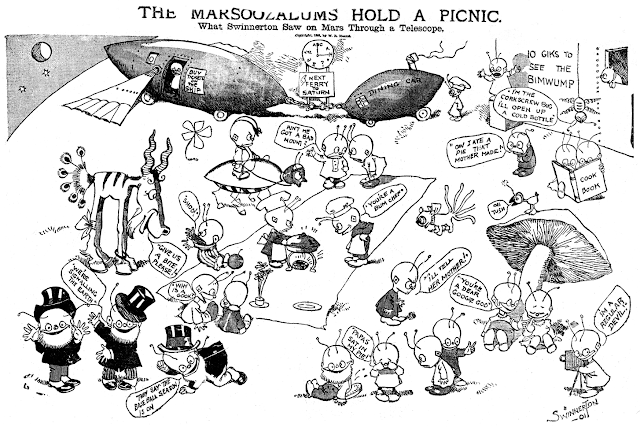 Pinpointing important firsts in the newspaper comics world is seldom simple. What is the first newspaper comic strip? Well, long story. How about first adventure strip? For that you can get arguments that put it anywhere from the 1890s to 1929.

One first that seems a little simpler is first science fiction strip. Buck Rogers, right? Well, some folks disagree. There is a faction that points to a much earlier feature, Mister Skygack from Mars (debuting 1907), but as much as I love that delightfully witty feature, I'm sorry but it is a panel cartoon, not a strip, and so therefore, doesn't qualify in my mind.

In StripScene #13 (Fall 1980), Mark Johnson offered a few additional contenders. He suggested 1902's Sandy Highflyer, an airship pilot who sometimes travels through space, as the first SF strip, but he noted that there are even a few earlier contenders. Along with a mention of 1901's Professor Gesla, a mad scientist strip by Dwig, he brings up a feature by Jimmy Swinnerton called The Marsoozalums, saying it is "about a clan of spacemen living on a far-off planet. It started on February 24 1901 for Hearst."

There was no sample of The Marsoozalums with the article, and I had no samples, but the Johnson brothers are as trustworthy as it comes so I did include a listing for the feature in my book, though it was a listing full of question marks.

Many years later Cole Johnson sent me a scan sample of The Marsoozalums, as shown above. I was disappointed to find that Swinnerton had merely added some antennae to his oft-used tykes, or bears, or tigers, and called them Martians. Not much of a sci-fi spectacle, really, but we do have aliens and a rocket ship, so I can certainly see them as a contender. Only problem is that, just like Mister Skygack, it is a panel feature, not a strip. But Cole's short message, which I didn't really clue into at the time, is alarming. He says "Here's a weird one from Swinnerton. The first extra-terrestrial series? Or is it a one-shot?"

Now that I'm finally trying to tie up the research on this feature, decades later than I should have, I'm faced with the possibility that the panel was a one-shot! I first checked the interwebs to see if someone else had any information about the feature. About all I could find was Luca Boschi's website, and to my horror he offers the very same sample of the feature as Cole did. That led me to be practically convinced that Cole's intuition was right -- we have a one-shot.

Finally, though, I combed through records in the OSU Bill Blackbeard collection, and found that he had a Chicago American for February 24 1901, and the cited title was indeed different from our sample: "The Marsoolazums. A Funny Scene That Swinnerton Saw Through a Telescope on the Planet Mars". I breathed a sigh of relief, and did a bit more poking around. I had already checked Alfredo Castelli's superb book, "Here We Are Again", and had been disappointed to find yet again the same strip installment that I already had. But a second more thorough look revealed a second sample elsewhere in the book. Lo and behold, that one had the February 24 title. I can't show it to you here, because the PDF is locked, but it is a panel of the same sort of alien hijinks as the sample above.
Did the panel run any additional times than those two? I don't know for sure, but I tend to doubt it. Does anyone know of any more?

EDIT: Alex Jay found the second installment of The Marsoozalums in the Denver Post. Note that it ran as a weekday strip there, not in the Sunday comics section:

Comments:
Wish I could add something here. I'm guessing that the sample Cole sent you was from a St.Louis Globe-Democrat, by the crumbly edge and that its in black & white. Had about three months of single pages from that period. So hard to find any available papers on file that carried a Hearst or even partial Hearst Sunday section that early, outside of the chain.
Beyond of the G-D, the only other one that comes to mind is the Boston Post.