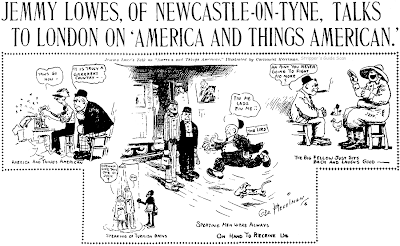 After a few days off to recover from his long string of Shriners cartoons, Herriman returns to the Examiner's pages on May 15 1907 with a cartoon commemorating the visit of British boxer Jimmy Lowes. I'm not sure why this was particularly newsworthy since the info I was able to find online indicated that Lowes only had a few major bouts at least a decade earlier. 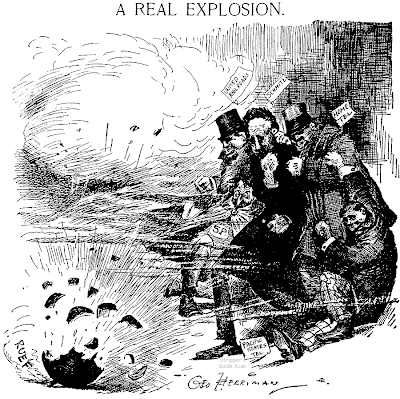 The incredible political scandal trial of corrupt kingmaker Abe Ruef has begun in San Francisco, and Herriman on the 16th comments in this cartoon that Ruef could well bring down a whole raft of the bribe-givers. Sadly we'll see little of Herriman's commentary on this trial for awhile as he's about to begin a phase of mainly doing sports cartoons. I do love Herriman's perceptive and funny sports editorials, but the Ruef trial was one wild ride and it would be great fun to have Herriman's commentary throughout.

Comments:
Looking through some papers from the time, Lowes was visiting the States as the trainer and manager to Jack Palmer, who was there for a transatlantic bout.

Lowes had been a boxer, (he was the first man to professionally fight Dick Burge, the best English lightweight of his day) but was by this time primarily known as one of the preeminant boxing trainers, managers, and bookmakers in England.

Thanks Tad, that makes some sense of the coverage.

Obscurity of the Day: Adolph From Hamburg 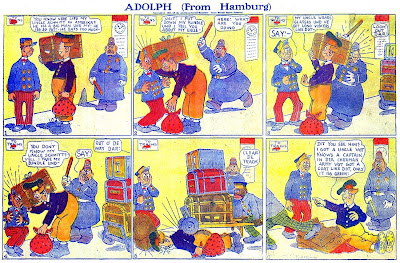 Here's another Opper obscurity from the files of Cole Johnson. Adolph (From Hamburg) had a real short run from February 18 to March 25 1906. Adolph was a perfectly pleasant, if dim, Teutonic yutz -- apparently Opper thought the concept of a friendly German was sufficiently out of the national character to merit a comic strip series.

The character made one final appearance on April 15, this time sharing a strip with Swinnerton's Little Jimmy.

Going to be out of town a few days, be back this weekend. 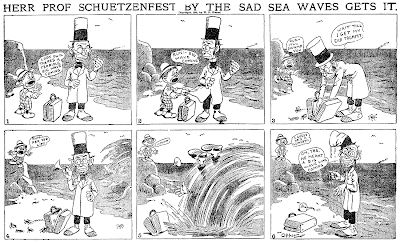 Apparently Cole Johnson considered my flood of Opper overflow posts to be too little of a good thing, because he's sent me some additional Opper obscurities. This first one I was particularly glad to get because for some reason this title, Herr Professor Schuetzenfest, was misspelled and misattributed in my Stripper's Guide index. For some reason I had Gus Dirks doing it.

This very short-lived strip ran from March 10 to June 16 1901, and this example is the last in the series. The professor was hard of hearing and the elementary gags revolved around his handicap. I don't doubt that the professor's name means something in German related to the gags, but the best I can come up with in Yahoo's Babel Fish translation utility is that it means "protect firmly".

Comments:
"Protect firmly" is a mistranslation. A Schutzenfest is a big festival celebrating a town's marksmen's association. Not much to do with deafness that I can see -- it's kind of like calling the character "Professor Oktoberfest" -- maybe the joke is that he's a frail intellectual, not a hunter or military type. Seems like a bit of a stretch though.

Hello Allan--Just found another HERR PROFESSOR SCHUETZENFEST, for 5-26-01, and it is drawn by Rudolph Dirks, not Gus, or Opper for that matter. ---Cole Johnson. 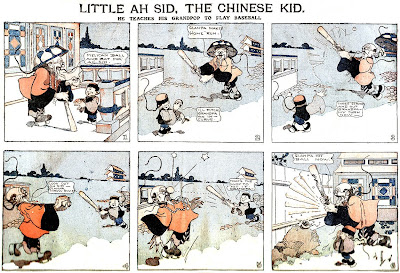 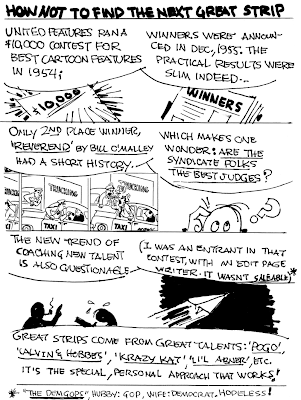 Comments:
The Demgops sounds like it would be full of great opportunities for laughs -- why do you think it failed, Jim?