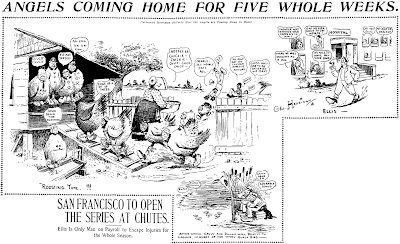 Obscurity of the Day: The Legend of Bruce Lee

Bruce Lee may have died in 1973, but his fame only grew after that. During the 70s the martial arts movie star became a genuine cult figure and every teenager, it seemed, was beating themselves silly with nunchuks and practicing Lee's signature poses in front of the mirror.

By 1982 the craze had died down a bit, but that didn't stop the Los Angeles Times Syndicate from trying to capitalize on the dead star with a comic strip. Actually, though, the idea had been gestating quite awhile. In 1977 the syndicate had approached two living legends, Milton Caniff and Noel Sickles, about doing a Bruce Lee strip. Samples were drawn up but Caniff grew disgusted with what he considered nitpicky suggestions from the syndicate and dropped the project.

What happened with the idea in that long five year period I don't know, but finally on May 23 1982 The Legend of Bruce Lee began appearing in a vanishingly small number of newspapers. The strip was written by Sharman DiVono, who was also penning the Star Trek strip at the time, and drawn by Fran Matera, veteran cartoonist. Dick Kulpa did some uncredited art assisting.

The small client list might seem odd given the devoted fandom for Bruce Lee. However, we must consider a few factors. First of all, newspaper editors were pretty much convinced that continuity strips were dead, so the strip had a lot of resistance to overcome. Secondly, the market was awash in media tie-in strips at that time -- Spider-Man, Hulk, Dallas, Star Trek, Star Wars and others were all jockeying for newspaper space. Bruce Lee may have just seemed like the low man on that totem pole -- popular with teens, certainly, but did he have the mass appeal to sell newspapers? Strips featuring much higher-profile media stars were just limping along as it was -- why take a chance on a cult figure that many older readers had never heard of?

Newspaper editors looked at all these factors and very, very few decided to roll the dice on The Legend of Bruce Lee. With hardly any clients (and presumably license fees that made the profit point pretty high to begin with) the strip apparently only made it about three months before being canned. As best I can tell the strip ended on September 4 1982 (has anyone seen later?).

EDIT: As you can see from one of the comments below the strip did actually continue on well past my end date. Another reader sent me a link to Comicfans showing original art as late as May 1983, and it seems Matera had quit by then and the strip was taken over by Kulpa. Now if only we could find a US paper running it that late. I really doubt that the strip switched to foreign-only distribution, but I have no evidence otherwise -- yet!

EDIT 3/1/2022: Jeffrey Lindenblatt has now finally found a US newspaper that stuck around to the bitter end; the Olympia Olympian ran the daily strip to June 11 1983. In the final panel, Lee says (granted, to a bad guy) "It's Over!".  Unfortunately the Olympian didn't carry the Sunday version, so we don't know if that lasted as long as the daily. Finally getting to see those late dailies, though, we can now report that Dick Kulpa took over the reins (and the credit) on April 18.

Comments:
Ha, cool. I have a couple Bruce Lee knock-off movies that came out after he died, of the "so stupid it's funny" caliber. When I saw this, I wondered why they didn't just make a comic book, but then I thought, "Oh, they did." I've seen them. :)

I remember seeing some of the Caniff and Sickles samples in Comic Buyer's Guide's old "Comic Collector" magazine in the early 1980's. I think that Matera's version looks more action-packed than the samples Caniff and Sickles did, though with a softer edge. I wonder if having a Caniff school version of Bruce Lee in the age of Neal Adams helped doom it.

The Art of Noel Sickles from IDW has some of the Bruce Lee strip art.

hey hey kid, I have a copy of that, and to my shame I have to admit that I paid so much attention to the "Scorchy Smith" strips and the magazine illustrations that the Bruce Lee stuff just fell into the memory hole ... I'll have to check that out again.

Obscurity of the Day: The Orbits


I saw the old listings for The Orbits in E&P well before I finally stumbled upon some samples of the strip. Not having seen it, I assumed that it would be some interesting futuristic 'Jetson-y' sort of thing. Turns out not so much. The strip is a rather pedestrian drama-comedy about a typical American family. Why are they called the Orbits? I dunno.

The strip was by Bill Juhre, who was coming off a modestly successful five-year run as the artist on Draftie, a strip about a couple of soldiers. Draftie had tried to adapt to a post-war world but newspaper editors had a lot of wartime strips trying the same gambit and Draftie was one of the features that didn't make the cut.

The Orbits may well have been intended as a drop-in replacement for Draftie (which, by the way, was named Lem and Oinie in its last few years). Both strips were syndicated by the John F. Dille Company. I don't have a definite starting date for The Orbits, but I wouldn't be surprised if it debuted the day after Lem and Oinie ended on May 4 1946. I do know that early on the strip was titled The Orbit Family, and the shortened version of the title followed quite early on.

The Orbits ran daily and Sunday until May 31 1953 in what seems like a very respectable seven-year run. However, you find the strip appearing in very few papers throughout that time, and usually it ran in third- and fourth-string papers in big cities -- the guys who had to pick over comic strip crumbs in the days of territory exclusivity contracts.

Comments:
Am I wrong or, always for Dille, Juhré ghosted BUCK ROGERS?

Weren't The Orbits seen in the Los Angeles Times?

Might have, dunno. Most of mine come from the famously cheapskate comic section of the Boston Globe.

I don't think I saw it noted here that E&P is about to reach a finale after 125 years.

I always associate Juhre with the "Tarzan" strip, although as an assistant or ghost he seems to have been everywhere.

The Orbits was a regular in the Boston Globe. bill Juhr was a ham-radio enthusiast, and often featured it in the strip. He used his own call sign, W9IMQ as the call sign of Mr. Orbit.

There was a Bill Juhre working with Mort Walker as staff artist on the Missouri Showme in 1949. Does anyone know if he was related to this Bill Juhre?

Anyone have any of these comics? Bill Juhre is my great grandfather!

I have an original daily, Laura. I bought it at auction some years ago, without knowing the artist or even the name of the strip, In fact, I just found out about ill Juhre a few minutes ago. I posted the piece earlier tonight on a Facebook discussion group called "Hogan's Alley," if you want to join and check it out!

"The Orbits" was a regular feature in The Long Island Press during the early 1950s.

Obscurity of the Day: The Dizzy Daily


Here's The Dizzy Daily by Jimmy Glynn. It never carried a syndicate stamp, so it may have been self-syndicated, though the typeface on the title box is reminiscent of that sometimes used by the George Matthew Adams Service.

The pun panel ran, at least in the San Francisco Chronicle, from March 10 to October 7 1924. Another run can be found in 1927 in the San Jose Mercury Herald, but I'm guessing those are reprints. 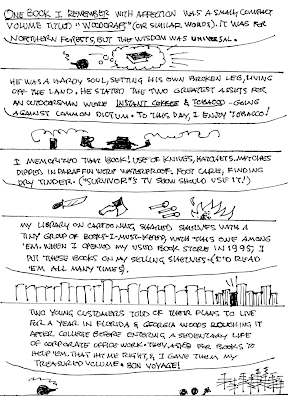 Comments:
I added a paragraph about proof sheets to the Wikipedia entry on comic srips, with a quote from an article on when King Features donated their's to MSU and Ohio State U. Do syndicates still use proofs or has electronical means supplanted them? Does the reference need any tweaking? I was surprised a Google of the term didn't readily find a good online definition or description, and it seemed to be appropriate to include it in this entry

Hi Dana --
Some clients, fewer and fewer these days, still request printed proof sheets, but they are definitely on their way out. For instance, I seem to recall hearing that King Features had either recently dropped them entirely, or were feeling out their last remaining clients in order to do so.

Some syndicates used to supply either proofs or mats. Mats are plastic or cardboard 'trays' in which molten metal is poured in order to make plates. Mats eliminate a step in the newspaper's process of getting comics on the printed page.

Some syndicates back in the day would even supply strips in plate form, ready to be put directly on the printing press.