Obscurity of the Day: Let's Run Away 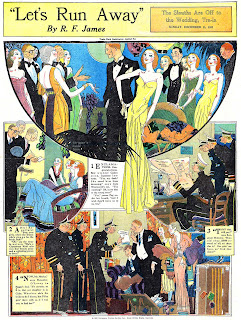 I know nothing about illustrator R.F. James except that the prolific penman (penwoman?) did at least three magazine cover series for Hearst in the early 1930s in addition to much other newspaper, magazine and book illustration work. Let's Run Away is the earliest of those series I've found, running from October 4 to December 20 1931. This one was done for the Newspaper Feature Service arm of the Hearst organization.

Let's Run Away is the story of a lovestruck pair who run off to Cuba to get married, told in a nigh-impenetrable Jazz Age idiom. As with most of the magazine cover series, the story is just a minor distraction from the pretty pictures. James worked here in a style very similar to Russell Patterson, his most noticeable departure from that model being the white doll-like faces of the women.This odd approach makes them look like cadavers to me, not at all the china doll imagery I assume James was going for. In this particular example (the only one I have on hand) the effect is accentuated by the colors being a bit off-register.

Comments:
Possibly Lee Roy F. James.
An AP obituary published in the March 10, 1959 Gadsen Times reads:
"Lee Roy F. James, magazine and motion picture artist, is dead at 80.
James, who died Sunday at a rest home, was an illustrator for Colliers, Red Book, Ladies Home Journal and other magazines. He was a member of the Metro-Goldwyn-Mayer motion picture studio from 1935 until he retired in 1947."
http://tinyurl.com/y33onbu

Your sample shows quite a stylized departure from the illustrations I find in a Google Books search for R. F. James.

Stumbled across your blog and "Let's Run Away." R. F. James is my maternal grandfather. Full name is Lee Roy Fitzgibbon James. This piece is much more stylized, possibly to fit the newspaper cartoon context, than the bulk of his work. Do you have any other examples of his work?

I have continued his legacy in the arts in another venue - in the field of architecture.

Thanks for you blog.

Hi James -
Unfortunately this is the only example of R.F. James's newspaper magazine covers I have on hand.

He is also my maternal grandfather. I have a strip similar to this one.
Lee Fitzgerrell Smith

Also my grandfather. I have half a dozen of his magazine illustrations, mostly done in charcoal, brush, and pen and ink. I also have about the same number of his strips, including Sylvia the Deb Detective and Don't Tell Auntie. It's the same thing: the jazz-age idiom and all. they are true period pieces.

Lee Fitzgerrell Smith is my sister and James Bryant my cousin. My sis's mom and mine was a well regarded plein air oil painter in Laguna Beach. She was Roy's daughter: Marcia James Fitzgerrell.