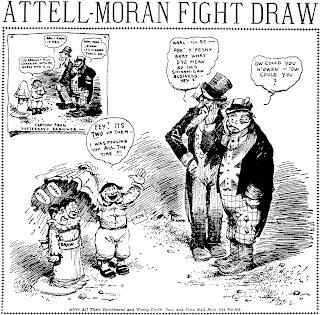 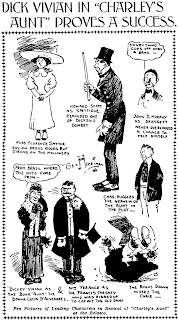 Thursday, January 2 1908 -- the top cartoon shows the result of the Abe Attell - Owen Moran featherweight title fight of the prior day -- a draw. Atell and Moran would have a rematch later in the year, and the result would be the same. Not until 1910 would Attell finally defeat the spunky Briton.

Herriman's other cartoon accompanies a rave review for the Belasco Theatre's presentation of Charley's Aunt, which was originally put on the stage in 1892 and has been a fixture pretty much ever since. Note another appearance by Charles Ruggles, later a noted film actor, who oddly enough had the lead in the first talkie film version of the play. Florence Smythe, too, rates a short Wiki entry.

No, not a new feature of the blog (did I hear a collective sigh of relief?), just a cute piece of doggerel that I happened upon and it gave me a laugh. This uncredited poem originally appeared in the Emporia Gazette in 1908.


One Kind of Sunday Paper
I spent five cents for the Sunday Dart,
And hauled it home in a two-wheeled cart,
I piled the sections upon the floor,
Til they reached as high as the kitchen door.
I hung the chromes upon the wall,
Though there wasn't room to hang them all,
And the yard was littered some ten feet deep,
With comic sections that made me weep.
And there were sections of pink and green,
A woman's section and magazine,
And sheets of music, the which, if played,
Would make an audience quickly fade.
And there were patterns for women's gowns,
And more for gentlemen's hand-me-downs,
And a false mustache and a rubber doll,
And a deck of cards and a parasol.
Now men are busy with dray and cart,
A-hauling away the Sunday Dart.
# posted by Allan Holtz @ 7:45 AM 0 comments

Abandons Use of Comics
(The Fourth Estate, 10/31/1908)
The Boston Herald, of which William E. Haskell is publisher, announced editorially in its issue of Sunday last that it had abandoned the use of the comic supplement, saying:

"We discard it as we would throw aside any mechanism that had reached the end of its usefulness, or any feature that had ceased to fulfill the purpose of attraction.

"Comic supplements have ceased to be comic. They have become as vulgar in design as they are tawdry in color. There is no longer any semblance of art in them, and if there are any ideals they are low and descending lower.

"But while relinquishing this feature of the Sunday paper we add others. The quantity of matter provided is not diminished, but the quality is improved. The pages remain, but are otherwise and more fittingly occupied."

The New York State Assembly of Mothers Clubs at its final session in Saratoga, N.Y., last week placed itself on record as condemning "Yellow" newspapers and the Sunday comic sections of newspapers.

[Allan's note: Pretty strong words from Mr. Haskell about a comic section produced right under his own roof! If Haskell was so disappointed by the quality of the material his cartoonists were producing he certainly had the power to do something about it. Of course, the reality is that the Herald wasn't successful in syndicating its lackluster comics and that's the real reason for its demise. Follow the money...

The date of Haskell's editorial, which would have been October 25, comes well after the homegrown comic section disappears from the Herald (or the microfilm, anyway) on August 18. The syndicated section has been found as late as August 30.]

Comments:
Just as a little sidenote: the Boston Herald dropped their Sunday paper completely at some point and only started printing it again about 10 years ago.

Obscurity of the Day: Stumble-Toe Joe 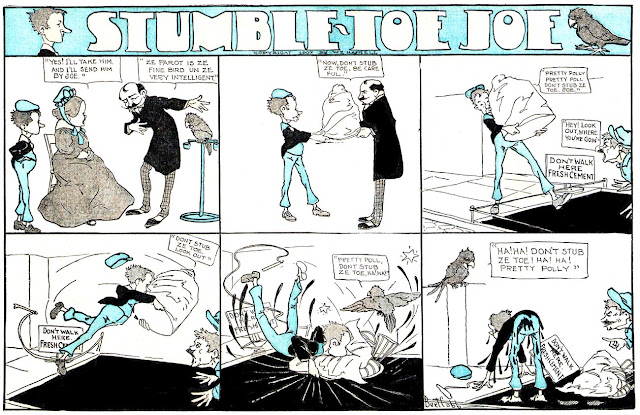 Once again I turn to that seemingly endless source of obscurities, the Boston Herald. Today we'll cover Stumble-Toe Joe, which was sort of Bert Cobb's B-feature, his headliner act being Ambitious Teddy. The plot of Stumble-Toe Joe was pretty basic -- the tall skinny consumptive-looking kid has two left feet and hilarity ensues (well, barely) when he missteps. Krazy Kat it ain't.

More about the Boston Herald tomorrow...

News of Yore 1908: Gene Carr a Fugitive from Justice?

Serio-Comic Mix-Up
(The Fourth Estate, 8/1/08)
A picture of Gene Carr, an artist of the New York World, which appeared in that paper recently brought Mr. Carr into an annoying position last Saturday.
The police were instructed by a telegram from the authorities at Wilkes Barre, Pa., to arrest Mr. Carr for the alleged murder of a man named Cameron Cool in Wilkes Barre on December 26, 1907. At the World office it was proved that a mistake had been made and that Mr. Carr was not the man wanted.
Mrs. Julia Craig, a widow, of Ocean Grove, N.J., was summoned to the World office to pick out the man she accused if he was there, accompanied by a Central Office detective and Dr. Thomas J. Carney, who knows the man and was to assist in the identification.
Mrs. Craig scrutinized the faces of a group of newspaper men and after several minutes declared that the man was not present. She was more positive than ever when Mr. Carr was introduced. Mr. Carr, she said, was much smaller and that the other had a French accent, which was missing in Mr. Carr's talk.
Dr. Carney backed up Mrs. Craig in her declaration.
It was evident that the man who was sought had masqueraded under Mr. Carr's name.

Comments:
It was dangerous being a newspaper cartoonist in those days!

Obscurity of the Day: Speed Spaulding

An unusual syndicate offering, Speed Spaulding retold in somewhat revamped fashion the story of the famous science fiction novel When Worlds Collide. The 1933 novel by Edwin Balmer and Philip Wylie was a real page-turner about a pair of 'rogue planets' that are hurtling toward Earth and the mad race to save the human race from the imminent destruction of the whole world.  The comic strip version injected a handsome young two-fisted hero and love interest, Speed Spaulding, into the storyline.

The series was advertised by the John F. Dille Company starting in 1938, but the comic strip did not begin appearing until January 8 1940, so apparently it took a long while to line up enough clients to make the strip a paying proposition. The strip was numbered so that papers could start the series late, and many did.

The strip was unusual in that most novel adaptations tend to adapt either classics (like Dickens and Poe) or current hot off the press properties (like Book-of-the-Month). Another unusual aspect is that Speed Spaulding was a daily and Sunday strip; for whatever reason this is a rarity for adaptations. The Sunday began on January 14 in papers that started the strip on time.

Speed Spaulding, even with two years of advertising behind it, was by no means a strip that ran in a lot of papers. As Ron Goulart points out in The Encyclopedia of American Comics, the plot about global catastrophe "wasn't as fresh as it had once been" and the story was quite depressing and bleak. In the original novel mankind doesn't exactly comport itself nobly in the face of extinction, and the authors focused on that aspect in the original story. That dim view of humanity is if anything enhanced in the strip, which is supposedly adapted by the original authors (take that with a grain of salt), and makes for a very dark read.

The art by Marvin Bradley, later to spend almost forty years associated with Rex Morgan MD, is pleasant enough if a bit stiff. Bradley seems to have been trying to emulate Caniff in this series, but only succeeded in drawing Terry and the Pirates-style faces -- he didn't even make a half-hearted attempt at the chiaroscuro technique. Alberto Becattini says that Dille syndicate regulars Len Dworkins and Bill Juhre ghosted some of the art.

In the original novel, a spaceship does end up getting away from Earth just in time and succeeds in landing on one of the rogue planets. The small band of survivors finds the new world reasonably welcoming and ends on the encouraging note that humanity has a chance to start over. In the comic strip version, which took 384 numbered daily strips (and presumably 63 or 64 of the rare Sundays) to come to its conclusion on March 29 1941, we get no such closure. In the final daily strip the spaceship lifts off, the Earth explodes and we never learn whether our hero and his entourage will live happily ever after. Perhaps there is a final Sunday after that daily that wraps up the story, but I haven't seen it.

Comments:
The samples shown here are very similar to the plot of the book with Speed Spaulding in place of Tony Drake, the protagonist of the novel. This was a curious choice for a daily comic indeed! 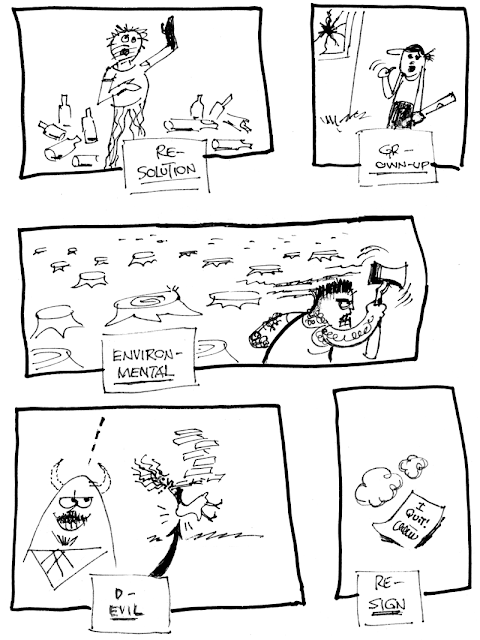