Sunday, August 9 1908 -- A minor Herriman cartoon for a minor news story. The Elks are holding a banquet in honor of some visiting members from Dallas Texas. The new story goes on for practically a whole column of type, but I will not bore you with all the details. (Okay, to be honest, I couldn't be bothered to read the story myself). 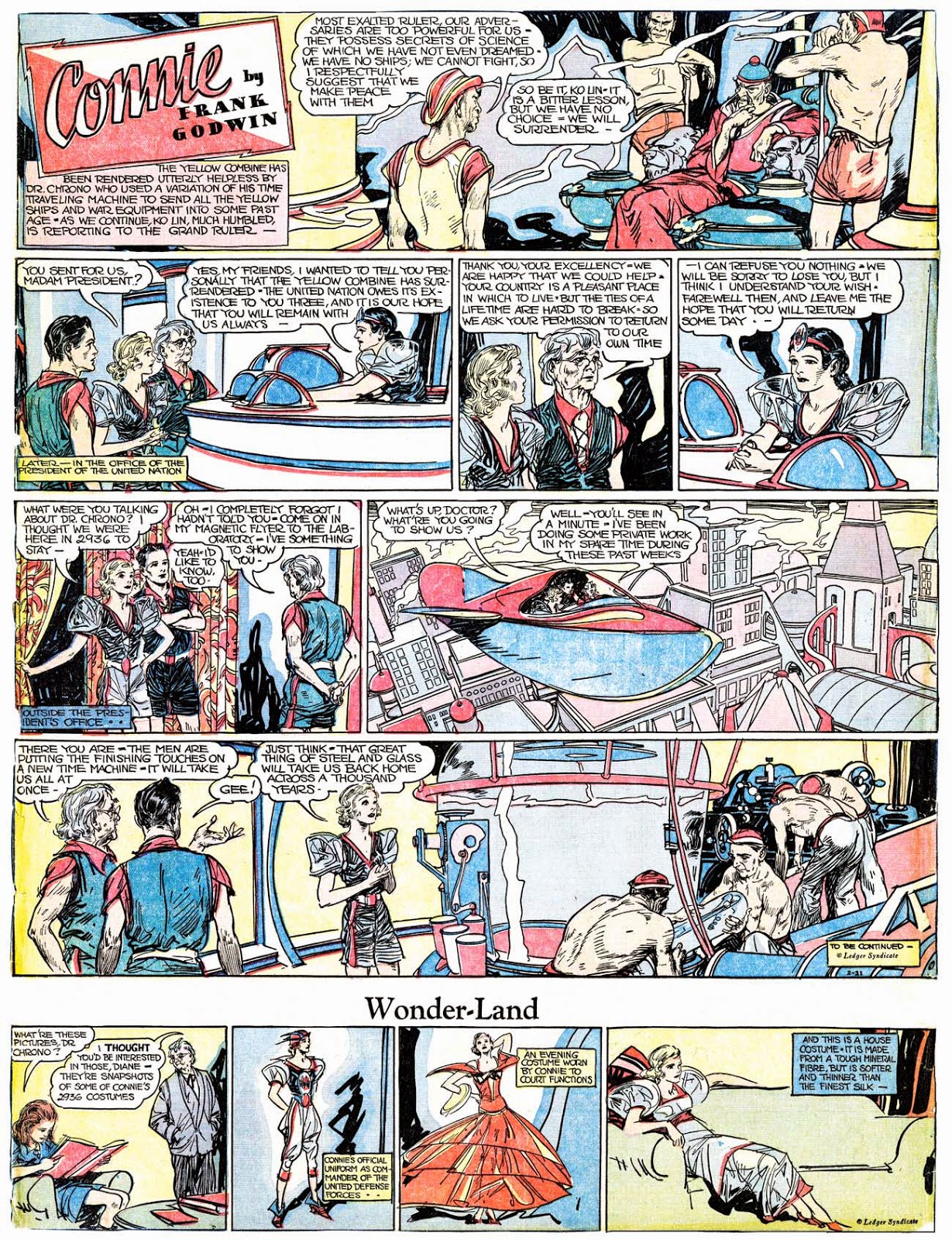 Comments:
So contemplate the casual way Dr. Chrono "in his spare time" while in a futuristic setting and helping defeat a terrible menance whips up a new time machine. Yikes!

Love the intersting sci-fi setting. This is visually to my inexpert eye as wonderful as Raymond's work on Flash Gordon. 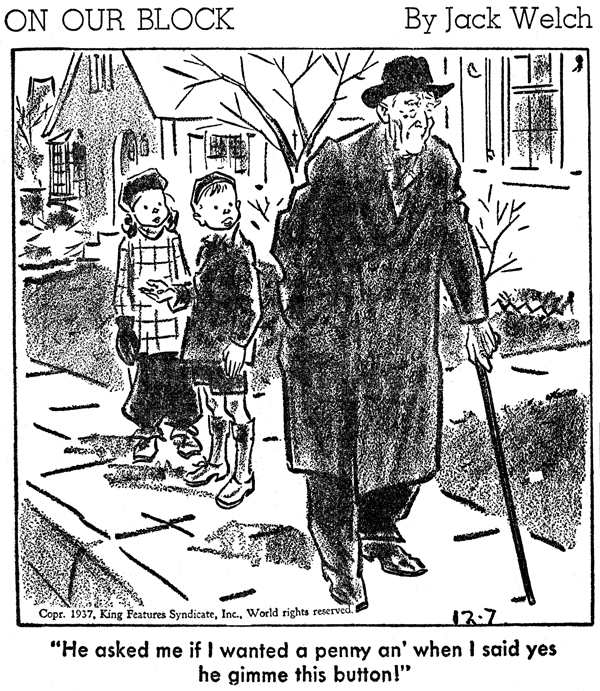 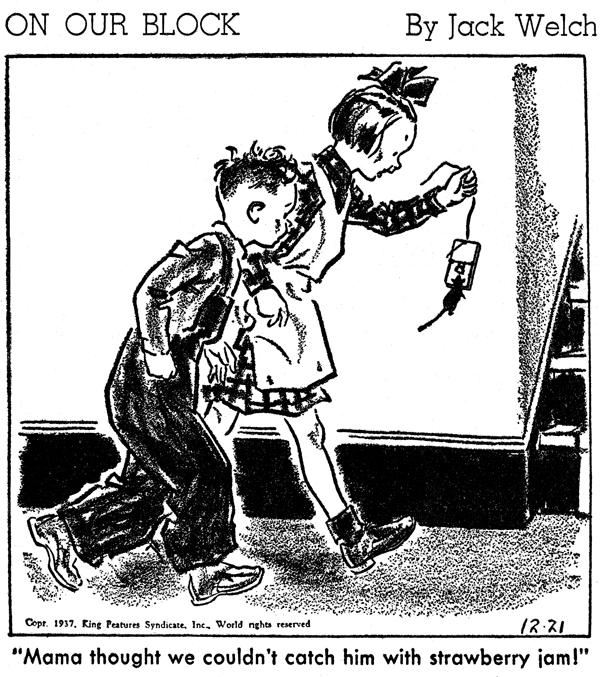 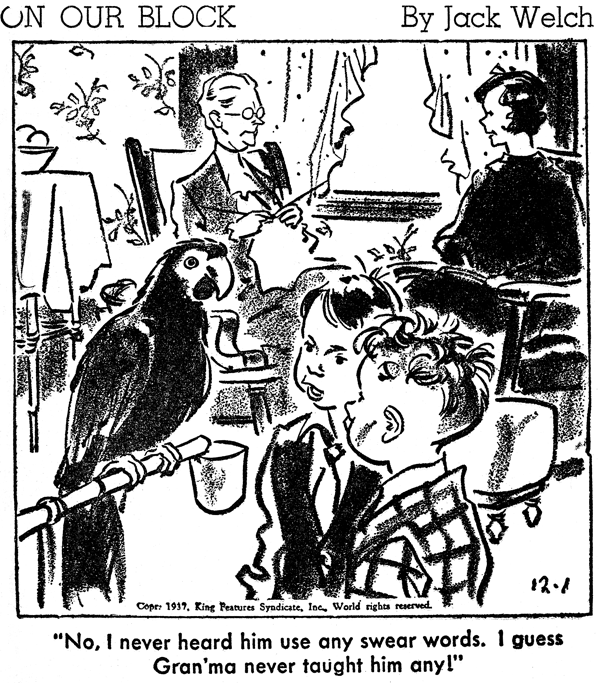 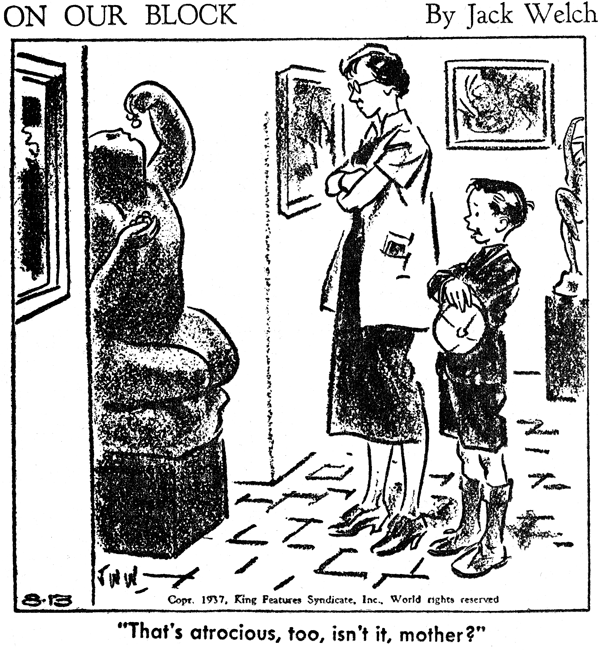 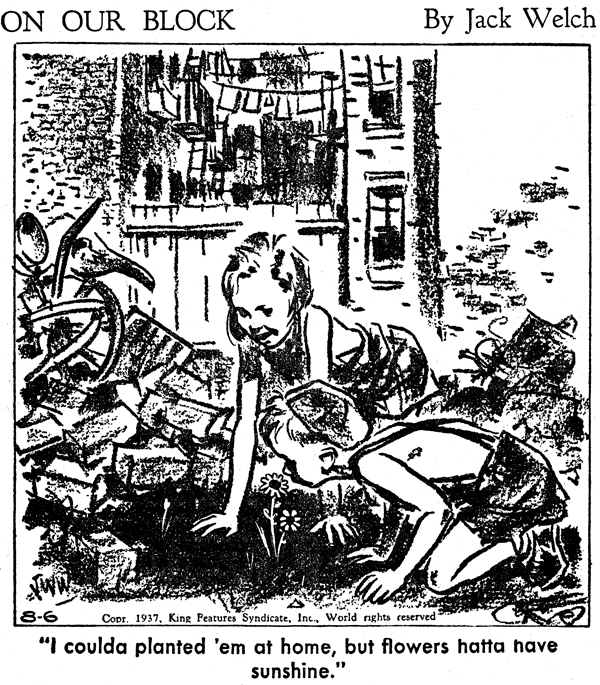 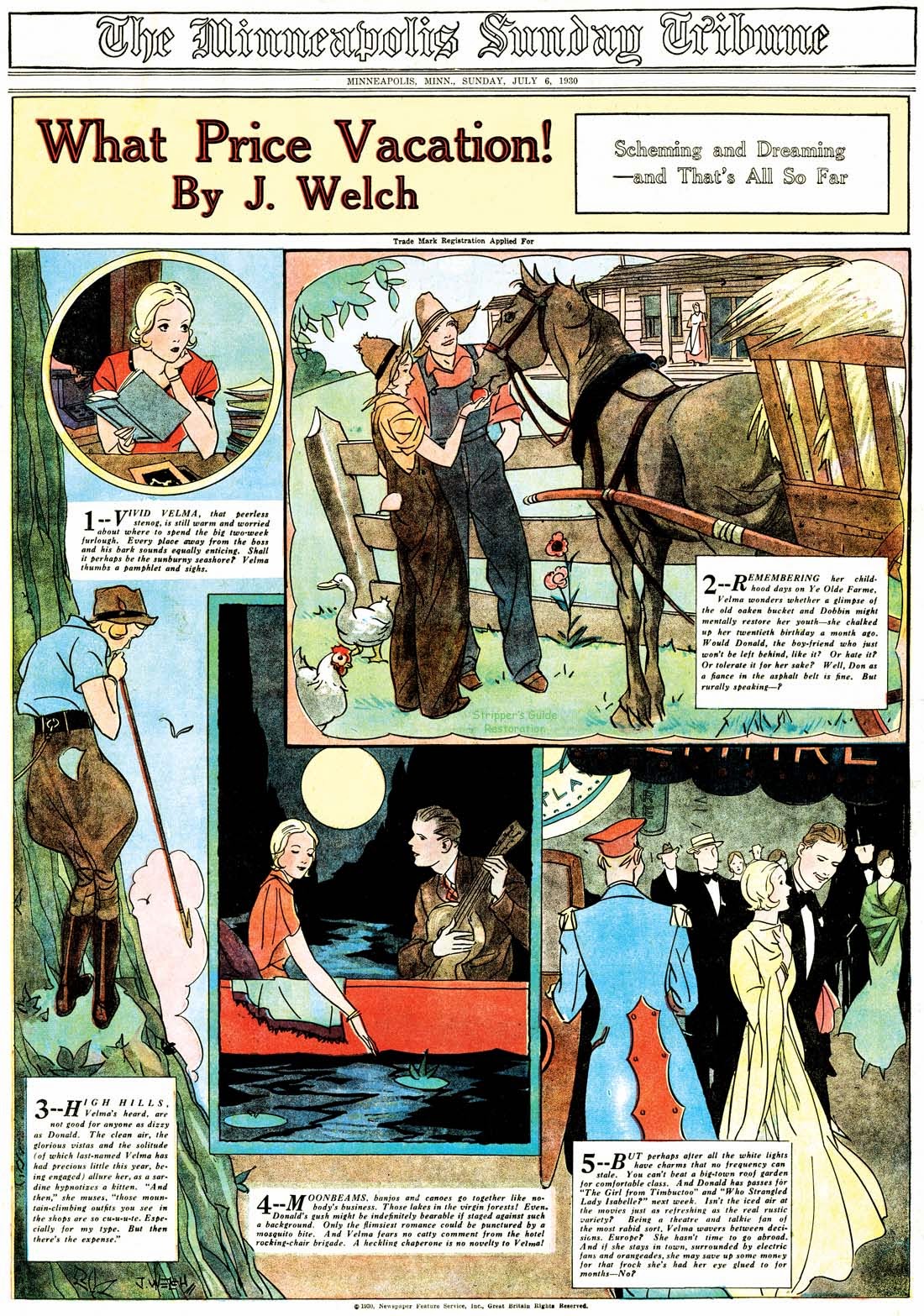 Morris “Mo” or “Moe” Leff was born in New York, New York on January 19, 1912, according to a family tree at Ancestry.com. In the 1920 U.S. Federal Census, Leff was the second of five children born to Benjamin, a baker, and Sarah, both Austrian emigrants. The family lived in Manhattan at 517 East 12th Street.

The 1925 New York State Census recorded a sixth Leff child and the family’s address as 194 East 3rd Street, Manhattan. Information about Leff’s education and art training has not been found. Perhaps Leff’s earliest work was in the tenth issue of the Dell comic book, The Funnies, which was published September 1929 and featured Eveready Eddie. 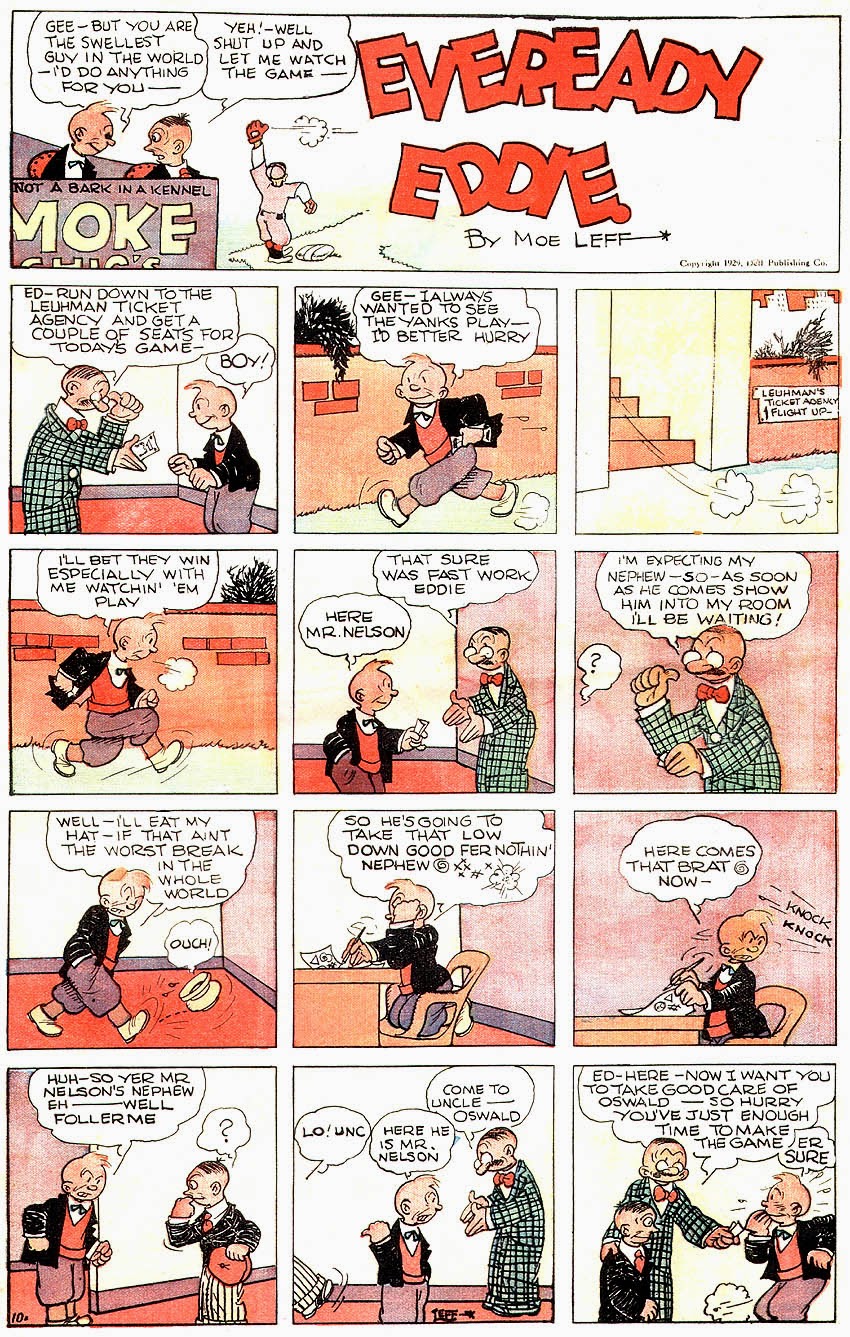 At age 18, Leff was a newspaper cartoonist according to the 1930 census. He lived with his parents and siblings at 625 East 5th Street in Manhattan. Leff’s younger brother, Samuel (1916–1981), would follow in his footsteps. Who’s Who of American Comic Books 1928–1999 says Leff was on staff at United Feature Syndicate, which distributed his Peter Pat from June 3, 1934 to July 28, 1935. (Some of the art was collected and published in France by Hachette in 1937.) In 1936 Leff ghosted Li’l Abner and Joe Jinks. In the late 1930s, Leff assisted Ham Fisher on Joe Palooka. 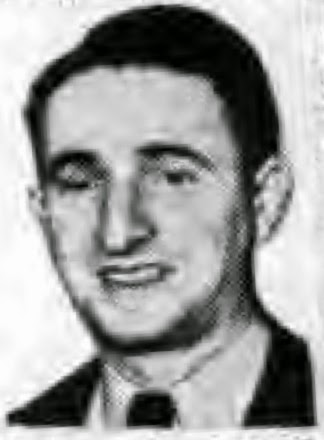 Question: Do you think that union boycotts should be outlawed as suggested in the Case Labor Bill?

Moe Leff, Illustrator, E. 46th St., Brooklyn—It would be very unfair to have legislation of that sort. There would be too many loopholes for chiseling employers to take advantage of. In mass boycott unions make known to the uninformed public their grievances—which are just in most instances.

Leff did share the stage, of sorts, with Fisher, as reported in the Indiana Evening Gazette (Pennsylvania) , April 18, 1949:


Wilkes-Barre, Pa., April 18—(AP)—A section of Wilkes-Barre mountain will be dedicated this afternoon as Mt. Palooka to honer Ham Fisher, native Wilkes-Barrean and creator of Joe Palooka of comic strip fame. The program is scheduled for 2:15, following a luncheon for approximately 30 dignitaries at Hotel Sterling.

With Fisher here for the ceremony are Moe Leff, an associate of the cartoonist; Joe Kirkwood, Jr., actor who plays the role of Palooka in the movies; Charles McAdams, president of McNaught Syndicate; and Humphrey, the fat boxing champion of Palooka in the comic strip…. 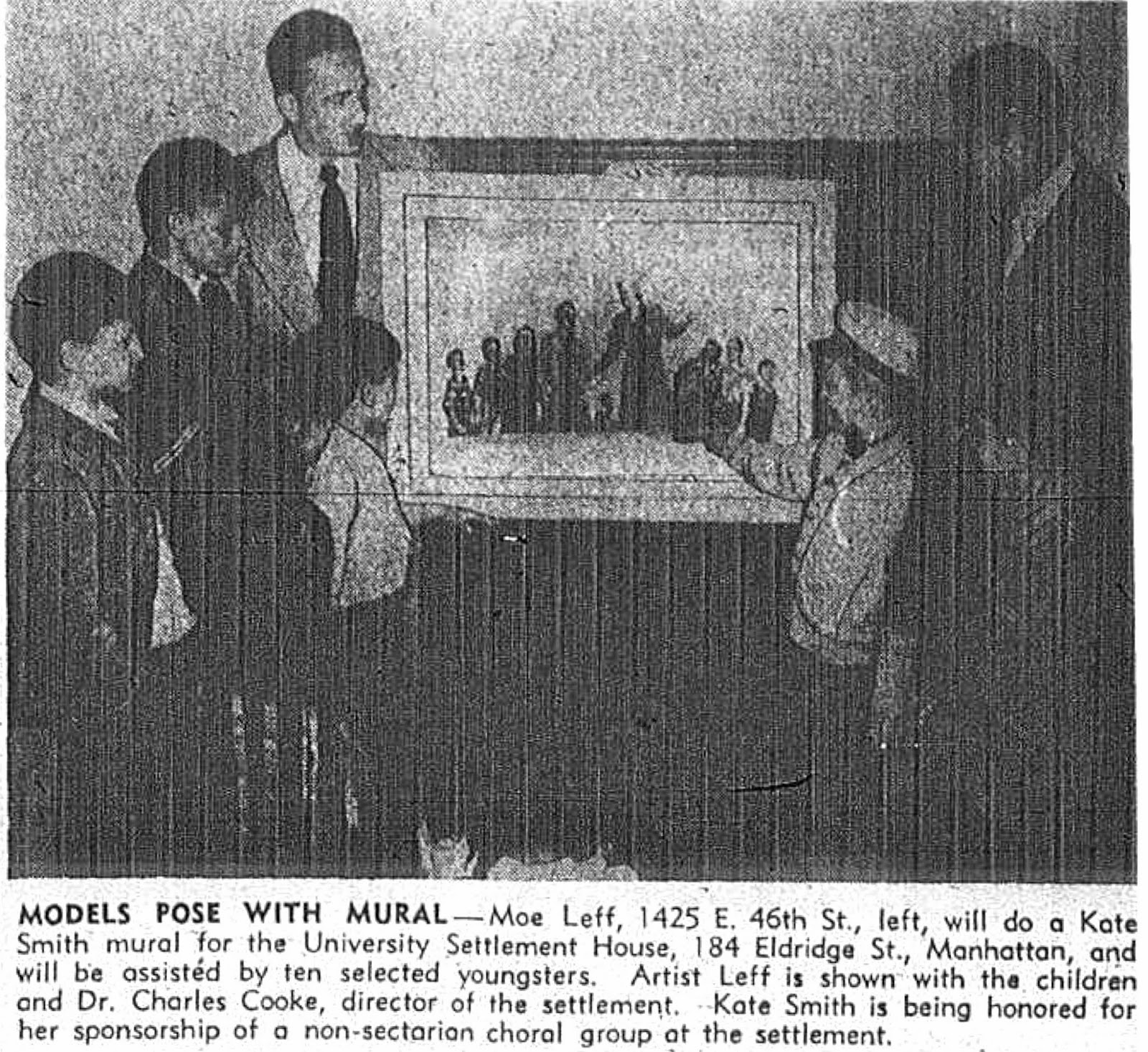 Fisher, 54, whose full name was Hammond Edward Fisher, wrote in the notes of failing eyesight and a diabetic condition. He said that he had swallowed some pills.

“My sight has gone to a great extent, is getting progressively worse, and my health has gone with it,” he penciled in one of the notes.

“May God and my beloved ones forgive me. I have provided for them amply.”

The body was discovered about 9 p. m. in the studio of Moe Leff, where Fisher had been working lately during his friend’s absence from town. The discovery was made by another friend, Morris Weiss of Englewood, N. J, whom Fisher’s wife, Marilyn, had called after becoming alarmed over not hearing from her husband….

…Charles McAdam Jr. son of the president of the McNaught Syndicate, said the Joe Palooka comic strip will be continued by other cartoonists. Moe Leff and Phil Boyle, both of whom have worked with Fisher for about 20 years, probably will get the assignment, he said….


Joe Palooka and author-cartoonist Moe Leff were cited in the Cong.[ressional] Record April 27 by Rep. Flood of Penn. Mr. Leff got the rare honor for “promoting jobs for disabled veterans” via the mew Palooka character named “Chips Shoulders.”

In 1959, Leff and Phil Boyle sued the estate of Ham Fisher and McNaught Syndicate over money and ownership of Joe Palooka. According to American Newspaper Comics, Tony DiPreta took over the strip September 7, 1959.

A family tree at Ancestry.com said Leff passed away November 29, 1968 in Brooklyn. An obituary has not been found. The Schenectady Gazette (New York), December 9, 1968, published the column “By…Jack O’Brien” which mentioned Leff’s passing:


Moe Leff, a friend, brother also of our longtime colleague Phil Leff, an editor at the San Francisco Examiner, died here in N.Y. much too soon at 56.

Comments:
Wow, Leff ghosted Lil Abner and then went on to work for Fisher. Im sure there is quite a story hidden there.
alex thanks for doing all the legwork week in and week out

Mo Leff was one terrific cartoonist on Joe Palooka. I just loved how he drew the cast of that comic strip. Such a very good storyteller. The varied emotions and his characters while cartoony really were dynamic. It's no wonder that as a little boy in Sydney Australia that I loved the comic strips and Harvey comic books. I'd like to know more about this man and his times of working on Lil Abner and Joe Palooka and what he drew once he left the Joe Palooka comic strip.

...I will be writing this post as a series of short posts, die to having lost two drafts of this already on this very sensitive phone!:-(
I foynd this while searching for information on The New York Knickerbocker, a (IIRC for all) weekly Sunday newspaper pyblished in New York City startimg in 1968 - which carried Joe Palooka!:-)

...The Kickerbpcker latr changed ots name to The New York Column. It ran to 1974 or so. It was, really, an attempt to provide an NYC home to many of the strips and features left without an NYC berth. when NYC went from 6?? 7?? Sunday newspapers at the beginning of the 60s to 2 by 1968.

...My family would sometimes buy it as an additional Sinday newspaper, but my father would refer tp it as " really, a glorified cpmics section " (It might have been more ambitios at the veru begonning.). I remember it as being tabloid-sized. Yes, pbviously, this was long after Moe Leff's departure frpm JP!

...When it launched in 1968, it had commercials on New York TV...which played up the fact thay it carried JP! I mentioned it gemerally beong a Sunday newspaper

.Ot try beimg a 8-fays paper ay least briefly, possibly as a stroke newspaper when i
NUC's other newspapers were shut dowm. An example fromm that period I found on the Wen called it the Column and Knickerbocker, like that, amd I remember the billing being reversed and beong the Knickerbocker-Columnn, like that...

..." It tried being a 7-days paper at least briefly, possibly as a syrike newspaper ", I meant above...
...Anyway,late in its life it changed its name to The New York Comics and reduced its npn- comics comtent to four pages, mostly?? puzzles. Its " glorified comocs section " nature prpbably meant that few libraroes preserved it.. 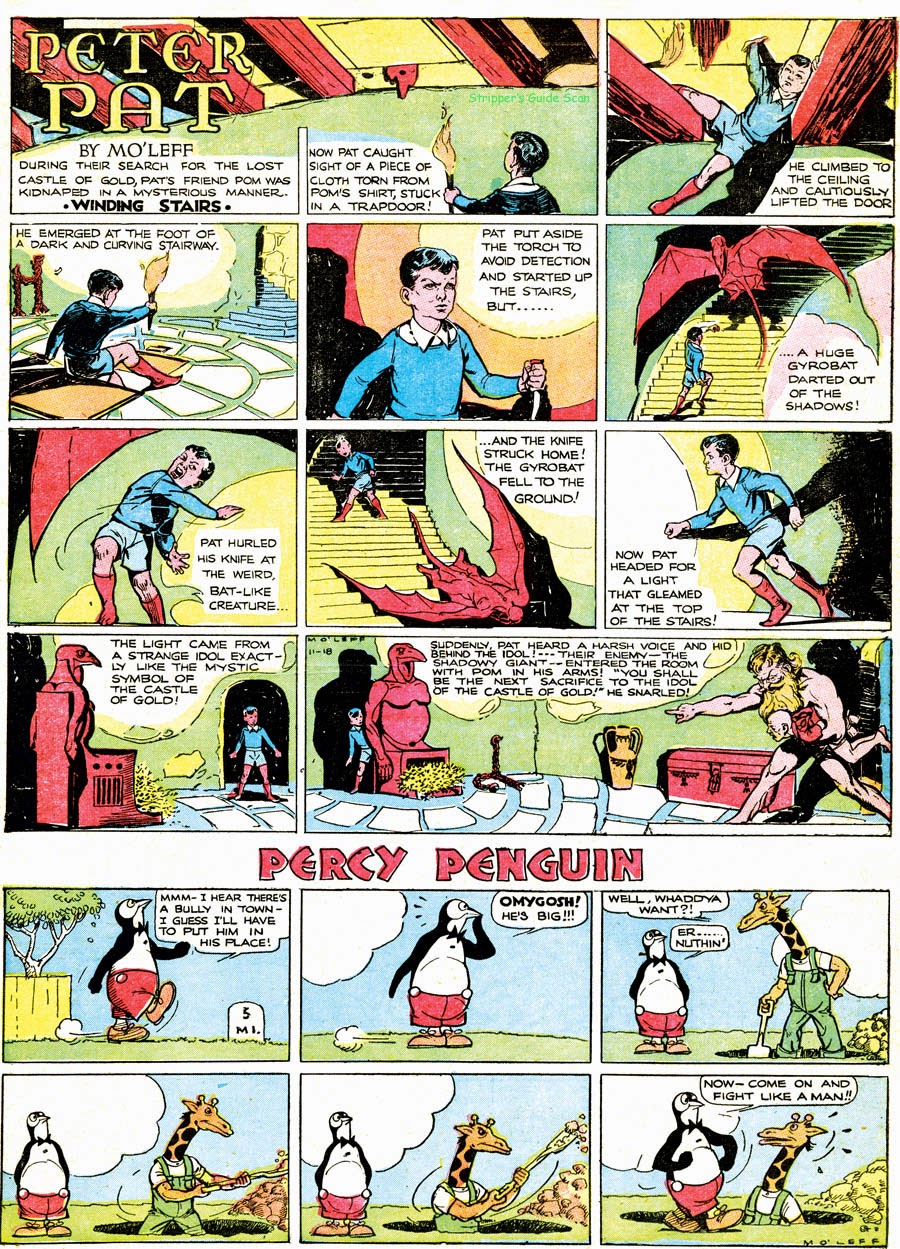 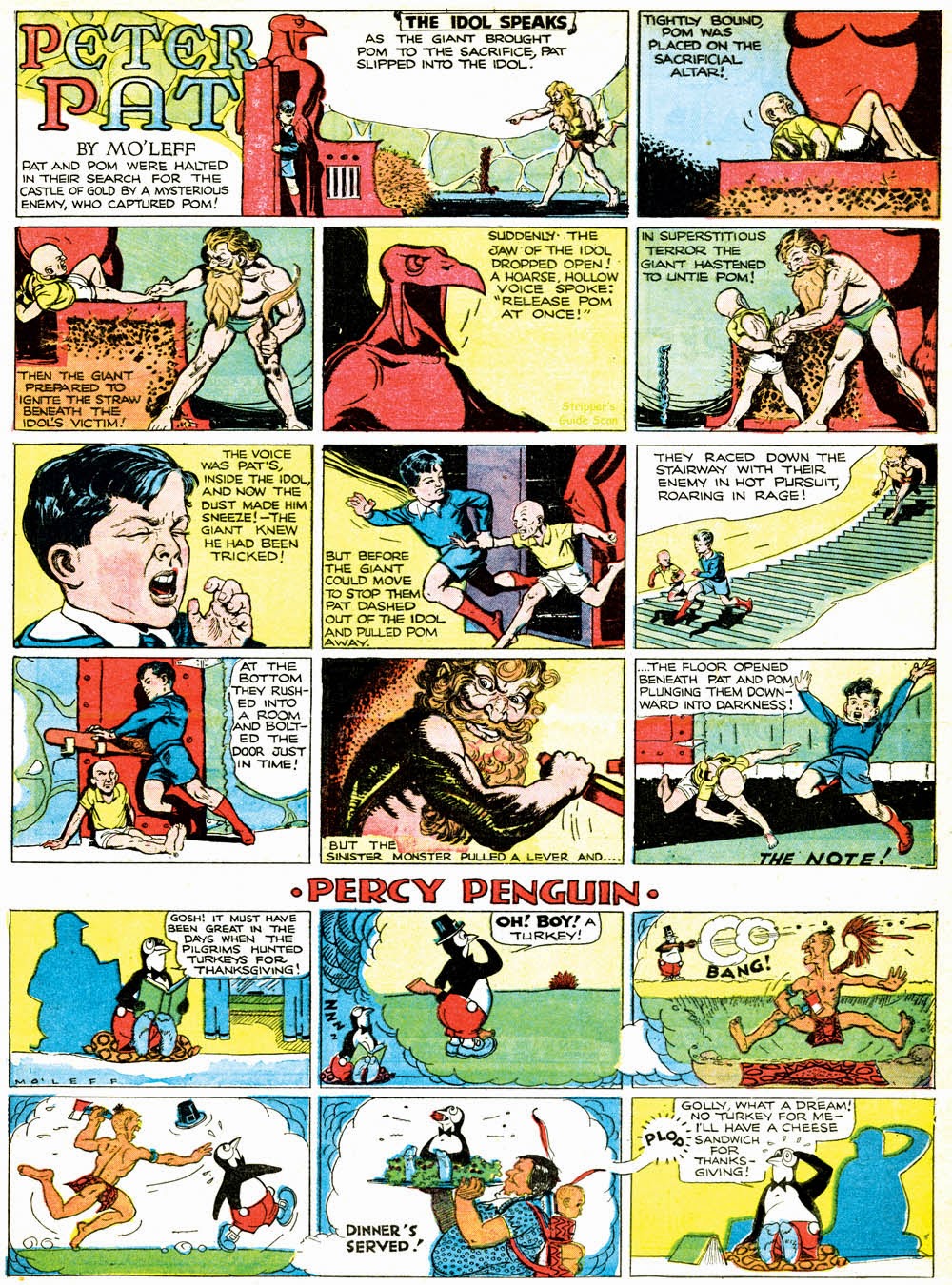 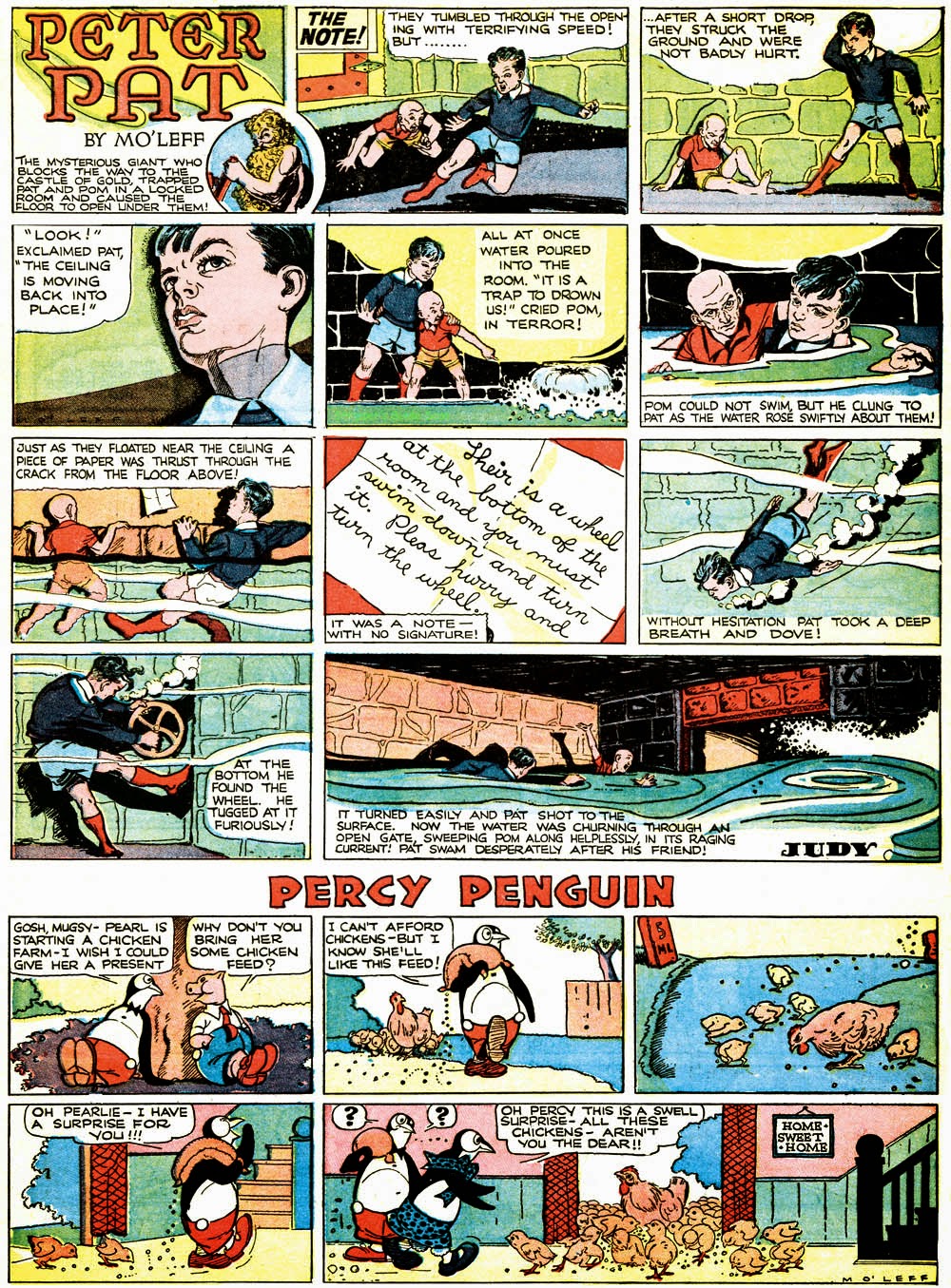 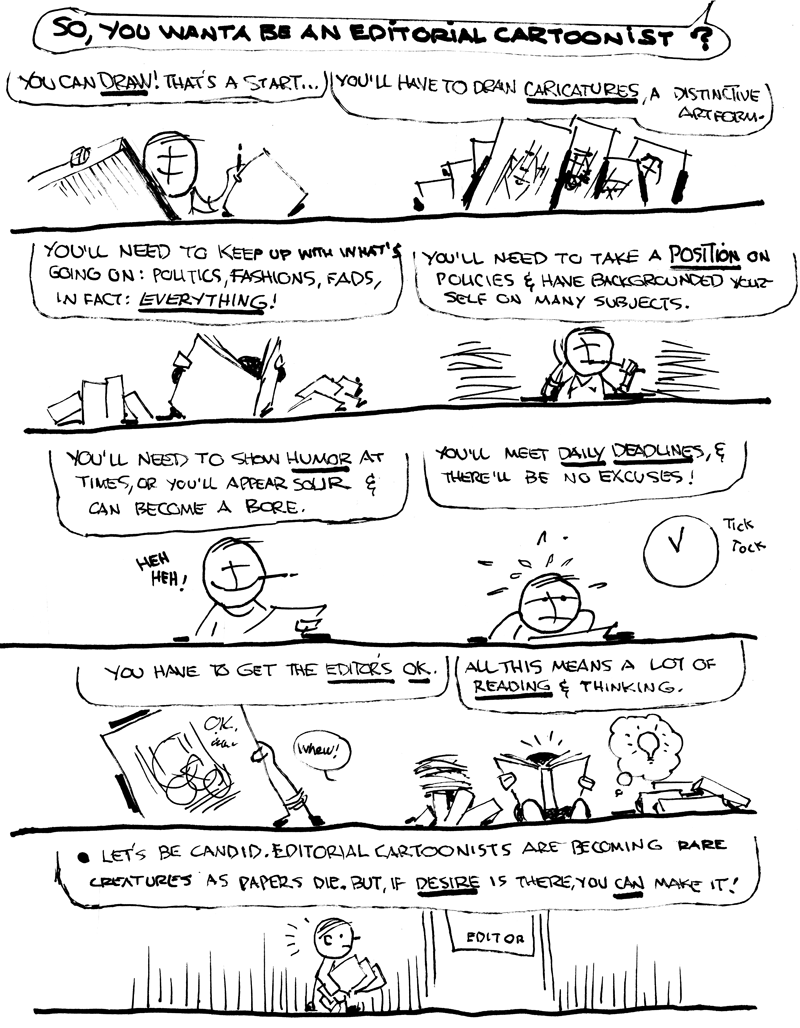