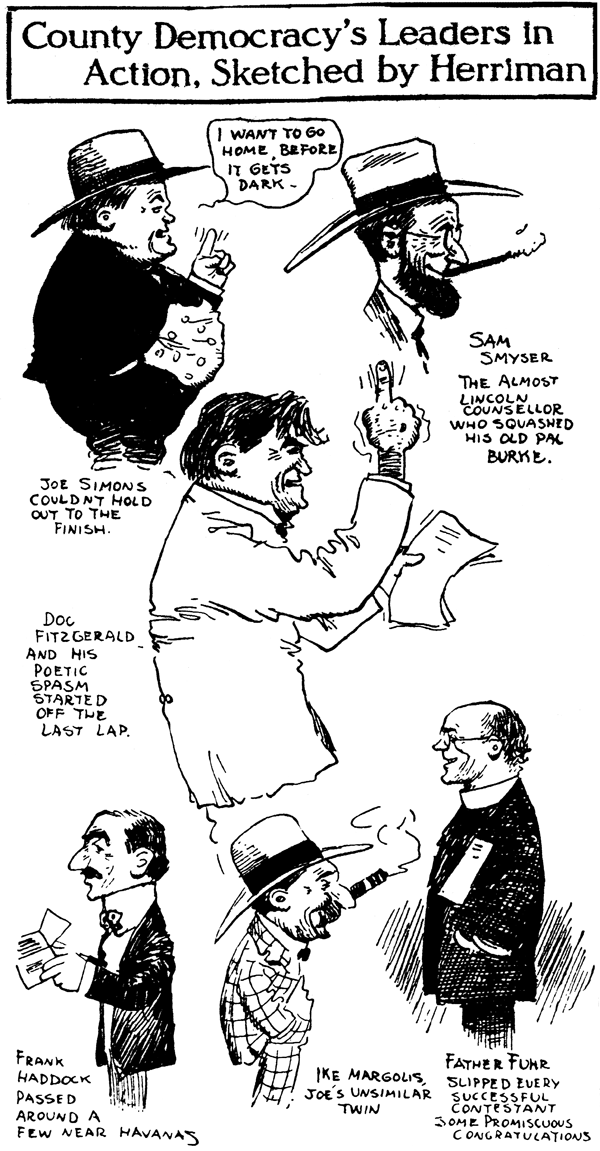 Saturday, August 22 1908 -- The local Democrat's convention proceeds pretty quietly. Herriman finds nothing exciting to report, so sketches faces again today. You, I and Herriman all agree we're ready for this boring convention to wind up, and thankfully, it has. 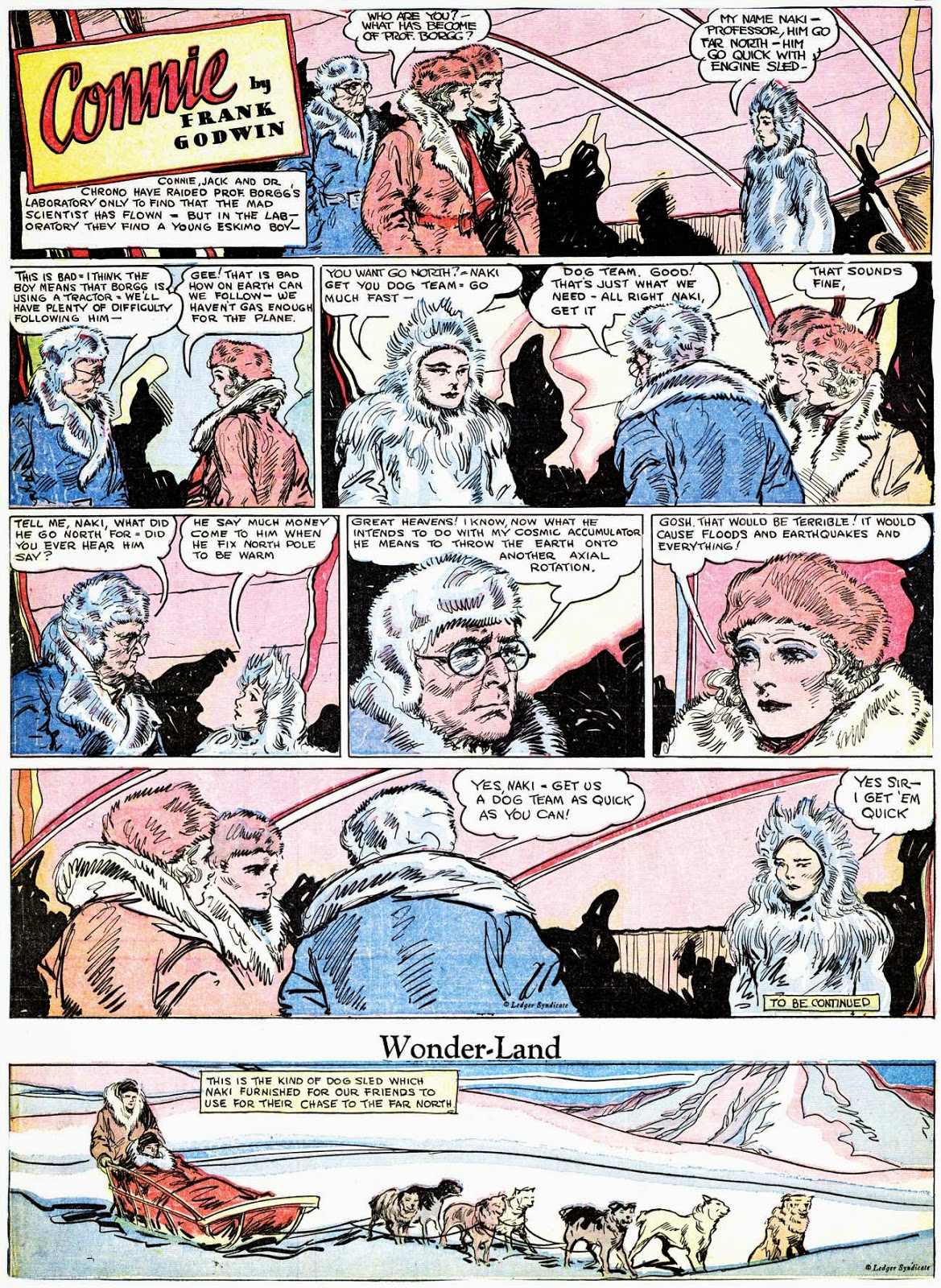 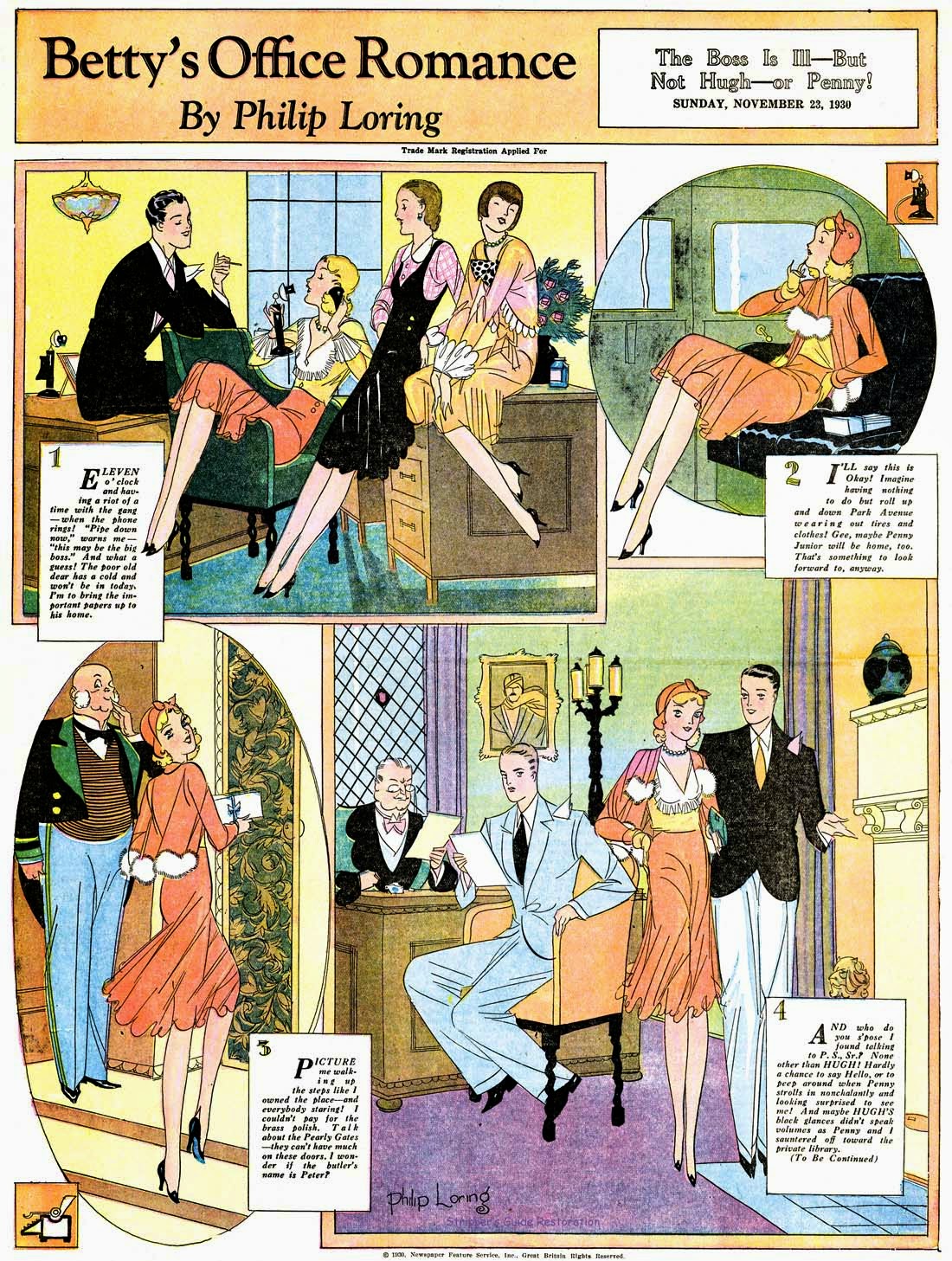 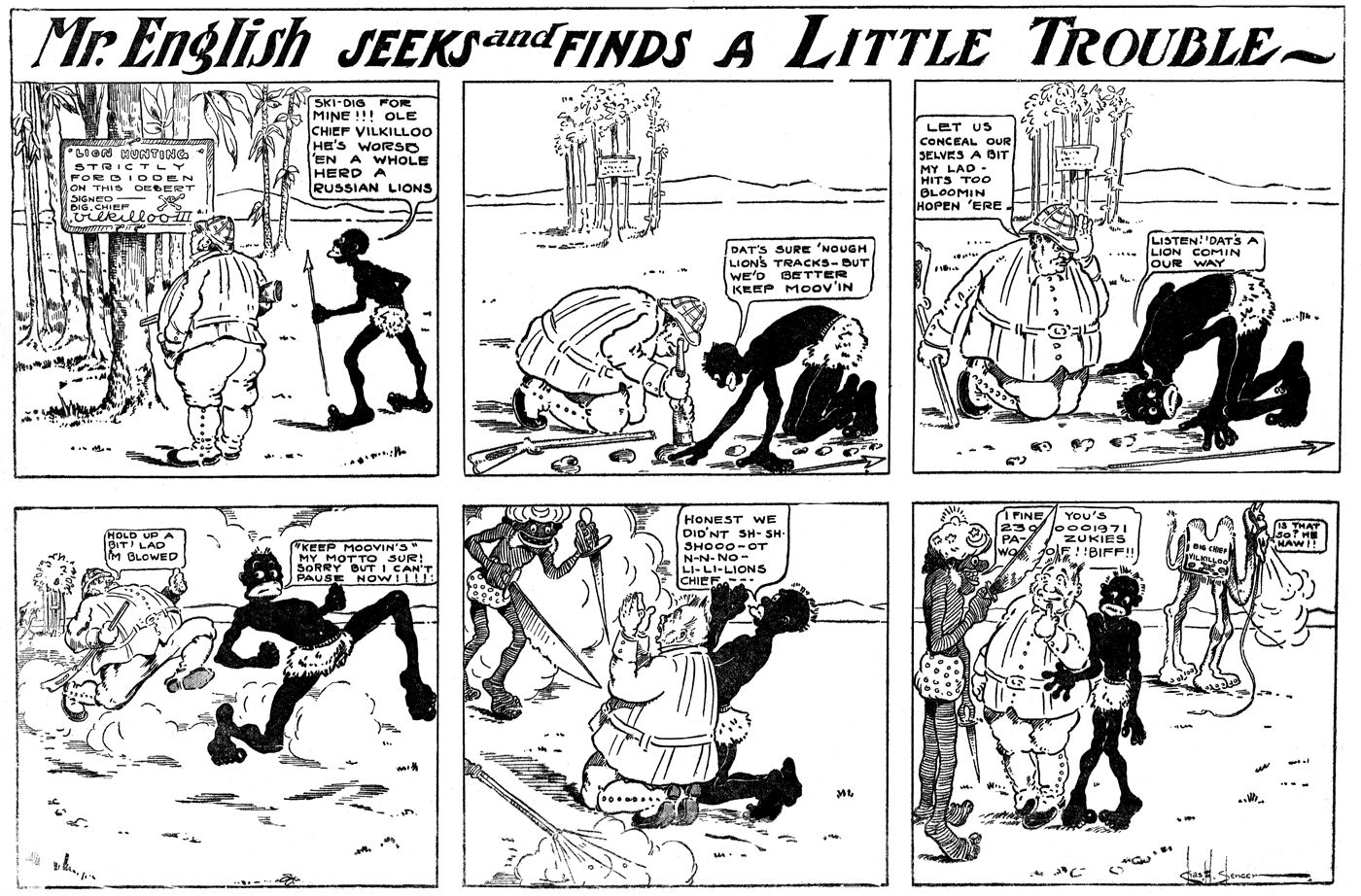 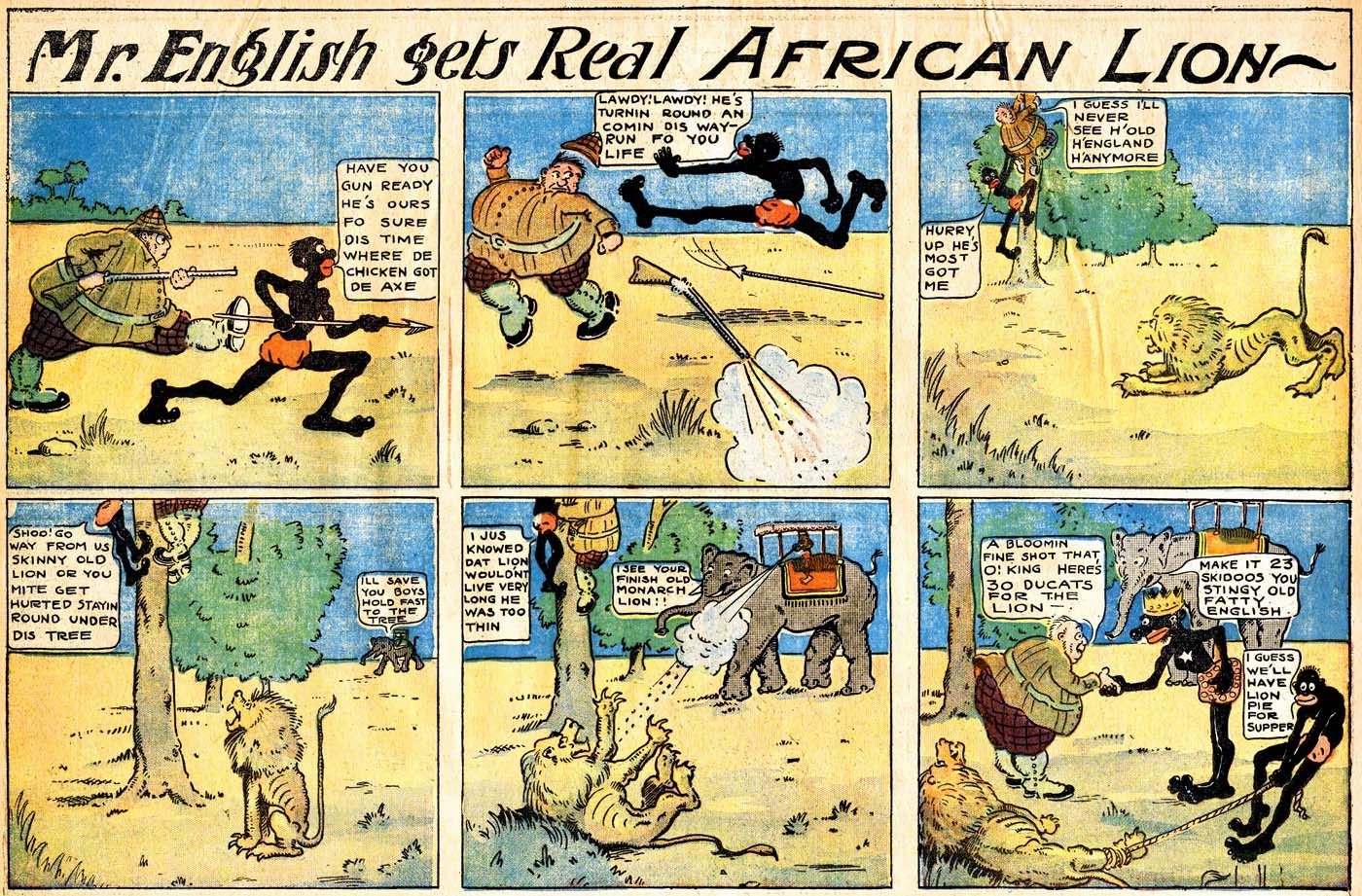 Obscurity of the Day: Sandy 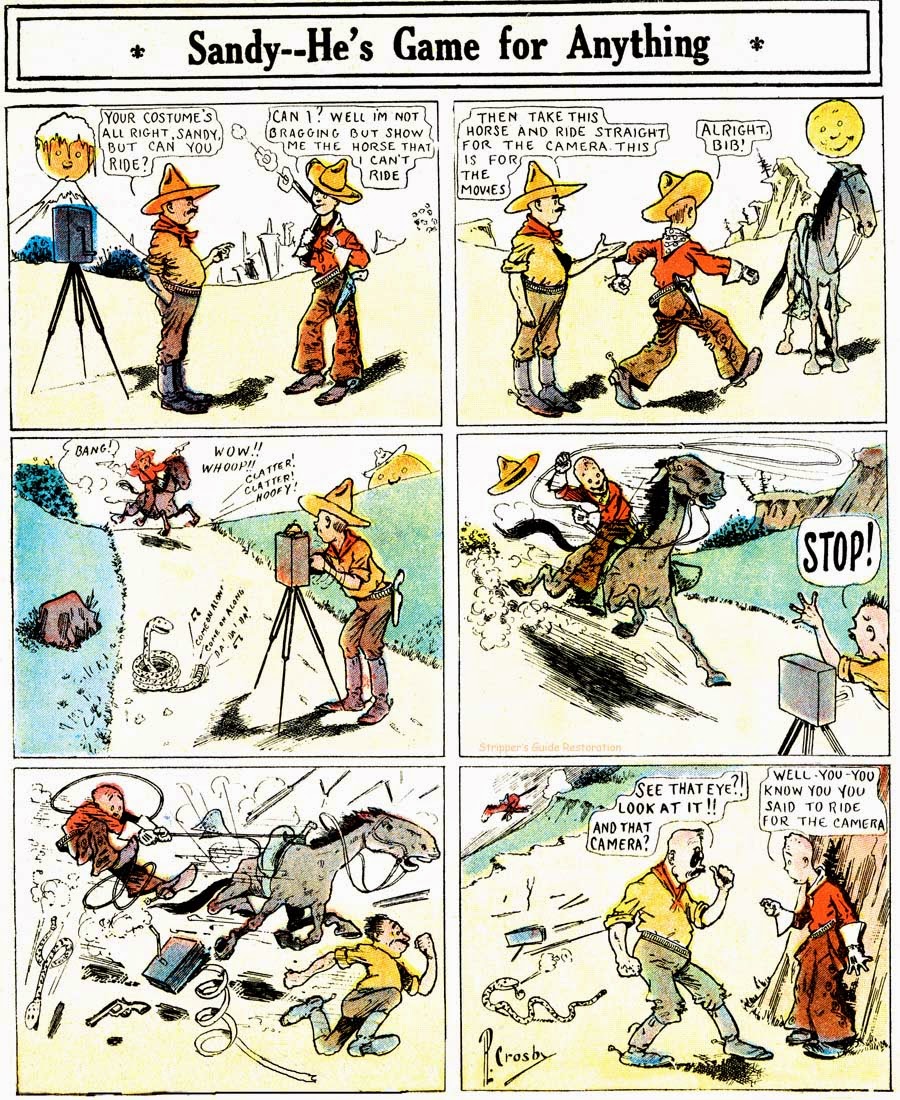 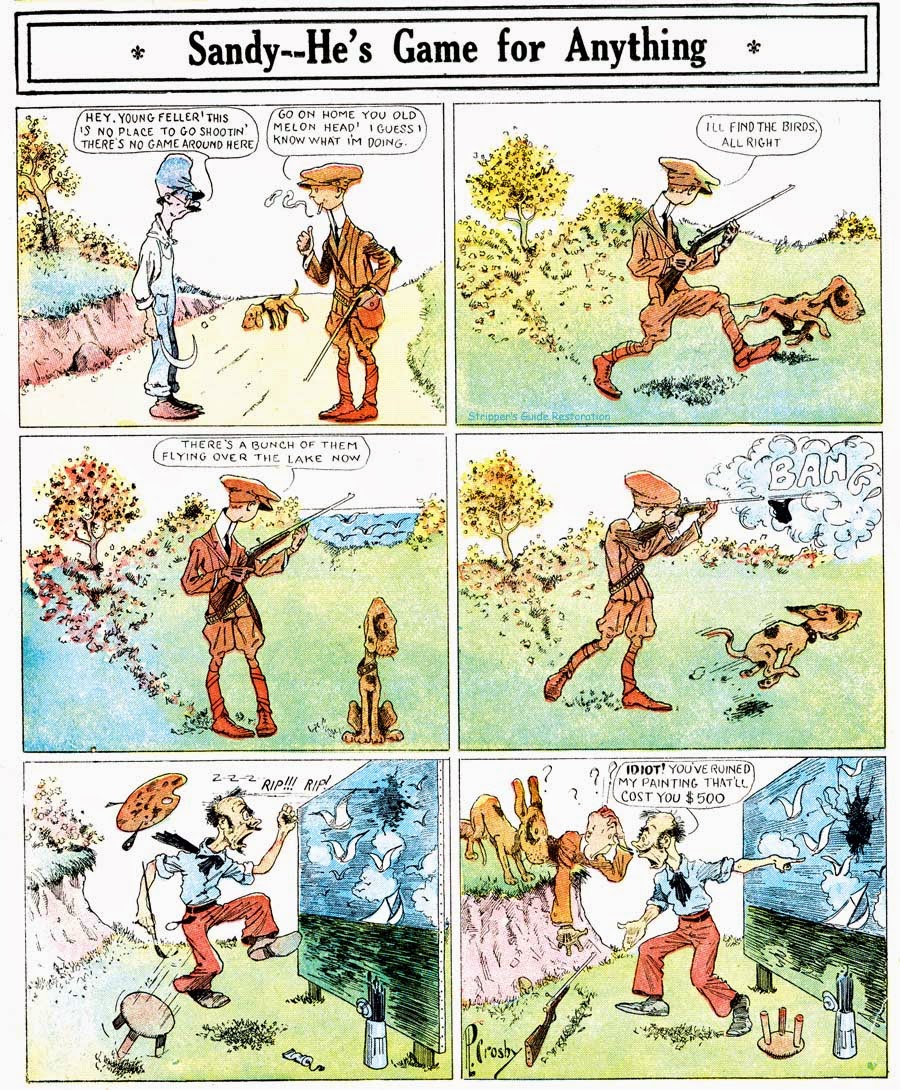 After a very short stint at the lackluster New York Globe, Percy Crosby's career took a big step up at the New York World in 1911, where he became an important producer in their cartooning bullpen. Between 1911 and 1914, Crosby produced over half a dozen series for the World's Sunday and weekday papers.

Although Crosby produced some of his earliest kid comics for the World, predicting his later masterwork Skippy, he also produced some soon forgotten but excellent series like Sandy (He's Game For Anything). In his small quarter page space in the World's Funny Side comic section, the Sandy strips didn't get a lot of room for character development or plot. In six small panels the cocksure Sandy would take a devil-may-care attitude, and then would be taught a lesson in humility. It was nothing unusual for the comics page, and the gags did not have any extra special spark. What did spark like mad was Crosby's still-evolving drawing style. He showed off his artistic chops by producing well-designed layouts, and exhibiting a flair for humorous anatomy.

Comments:
The color Sunday comics are just So Marvelous! Maybe the kids today will say what wonderful comics were online on their iphones and ipads one day....I'm doubtful.
The heyday of newspapers, magazines was so fertile.
Today, the best/best paid artists are.... ? Doing graphic novels, comic books, computer graphics.
Thankyou for celebrating this wonderful artform.

Where can color comics be seen? A few compilations and....... here. Other places?
I'll have to check out your links.

We discussed Tad's Sunday series And His Name Was Bunk awhile ago, and I mentioned that Tad was not one to let a good character languish. The dog Bunk was used in his sports and other cartoons for years afterwards. Here's a few samples from Cole Johnson of his weekday appearances. The top one is from 1907, before the Sunday series, the bottom one is from 1908, after it.

The top cartoon is especially interesting as it comments on the 'celebrity trials' of the day -- you may be familiar with the Evelyn Nesbit/Harry Thaw trials that captured the fascination of the whole country, but that was just a particularly memorable one in a long line. The sensational New York newspapers kept a constant vigil for trials that could make for lurid headlines, and covered them to a degree that makes the O.J. trial seem positively sane and sober by comparison.

That reminds me, I'd like to make a reading suggestion to you -- The Murder of the Century by Paul Collins. It tells the story of one of the first trials that was run just as much in the pages of New York's yellow journals as in a courtroom. In fact, if not for the New York Journal and World, the case most likely never would have even identified a suspect to put on trial. I resisted buying this book for quite awhile because of the tagline on the front saying that the crime "sparked the tabloid wars". Of course there were no sensational New York tabloids for more than twenty years after the trial, and that line gave me pause as to the quality of research that went into the book. When I finally succumbed I was treated to a great read that was very well researched. I imagine some marketer insisted on that idiotic line, and I shouldn't have damned the author for what I now see as well-meaning but factually incorrect marketing fluff.

Oh, one other thing -- notice the behatted dog in the bottom cartoon? This is an early appearance of another Tad mainstray (sorry!), Silk Hat Harry, who would be in the Tad spotlight during much of the teens.

Comments:
Tad is fantastic! I'd love to see a biography someday on him--he likely packed three lifetimes in one! I have a 1911 collection of DAFFYDILS published by the T.A. Dorgan Co. that's a riot for the catchphrases alone ("OFFICER, DUST OFF THE ELECTRIC CHAIR!").

Your Murder of the Century remark leads me to think of King Features' Crime of the Century comic strip about the Lindbergh kidnapping:
http://www.nj.com/lindbergh/index.ssf?/lindbergh/stories/comic.html
D.D.Degg 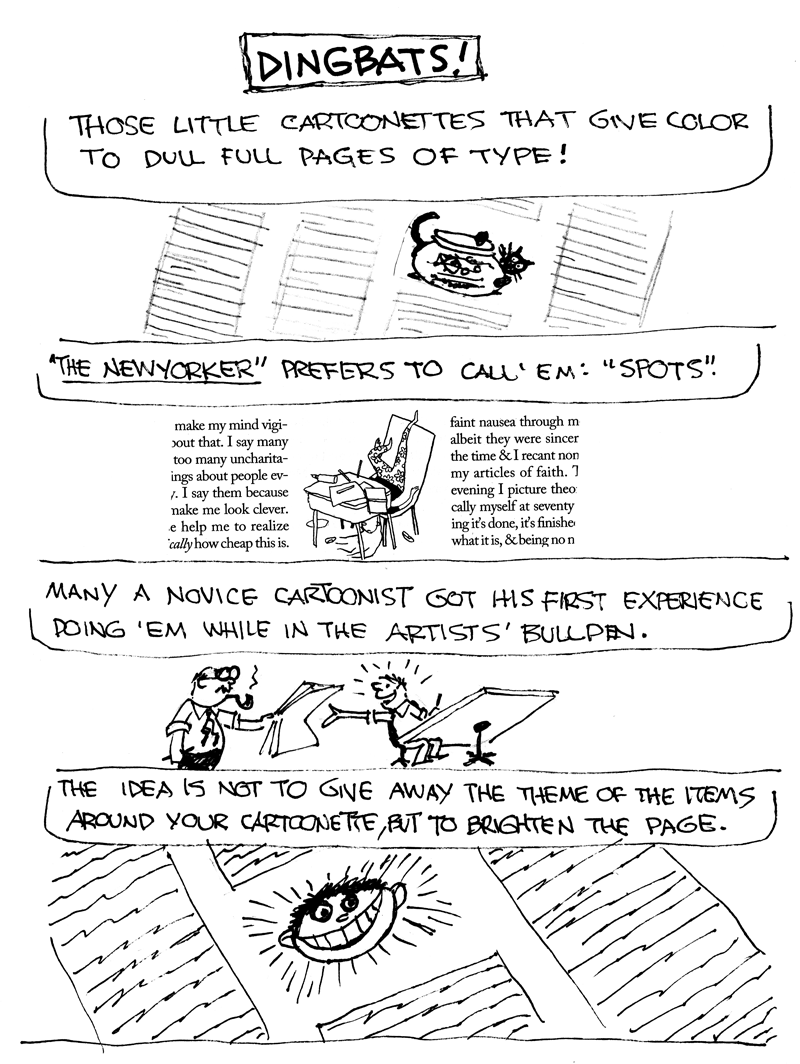