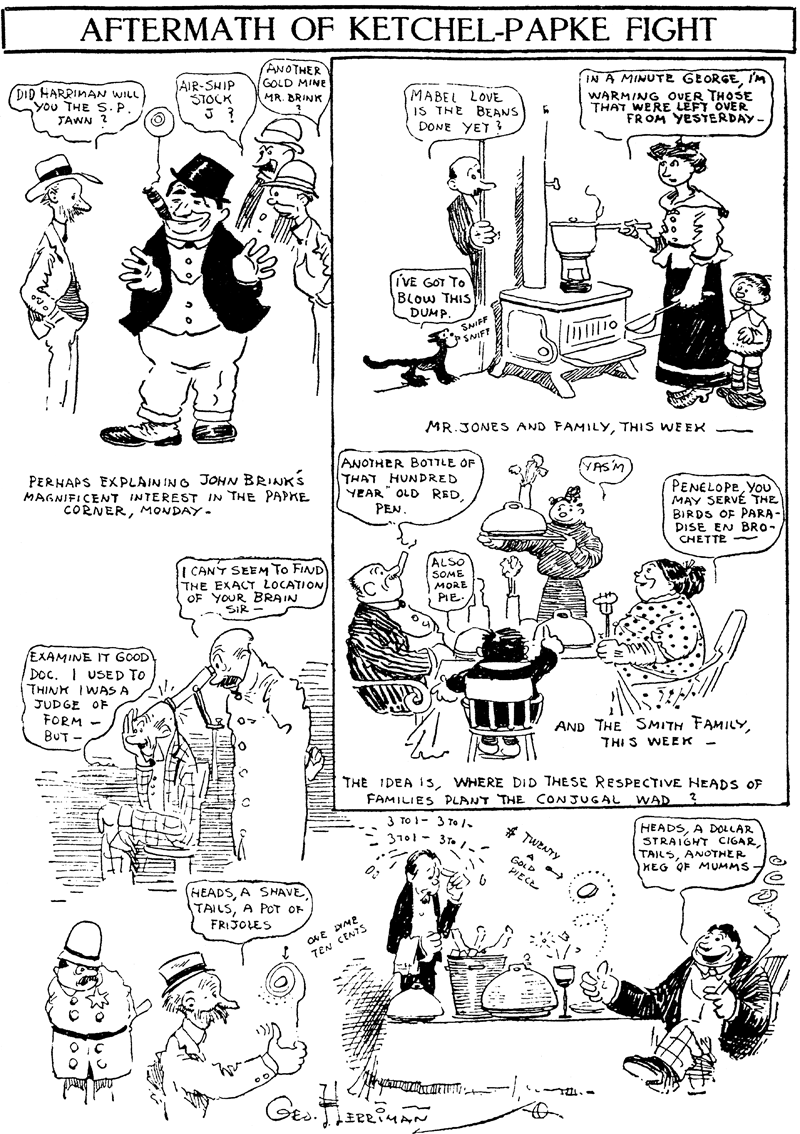 Wednesday, September 9 1908 -- The big Ketchel-Papke fight is now in the history books, and writ large is how Papke dominated the proceedings. He knocked the champ, Ketchel, down no less than five times in the very first round. Ketchel never fully regrouped from the bad start, and was knocked cold in the eleventh, but saved by the bell. In the twelfth Papke sent Ketchel to the canvas twice, and the second time Stan K. could not get back to his feet in time for the count of ten.

Herriman's cartoon is an exercise in irony, as Papke's odds were only 2-to-1, by no means a road to riches for betting folks.

Click for the complete story of the fight, with a Briggs cartoon, from the Chicago Tribune.

Comments:
The Chicago Tribune Archive is great!!! I highly recommended it!!! 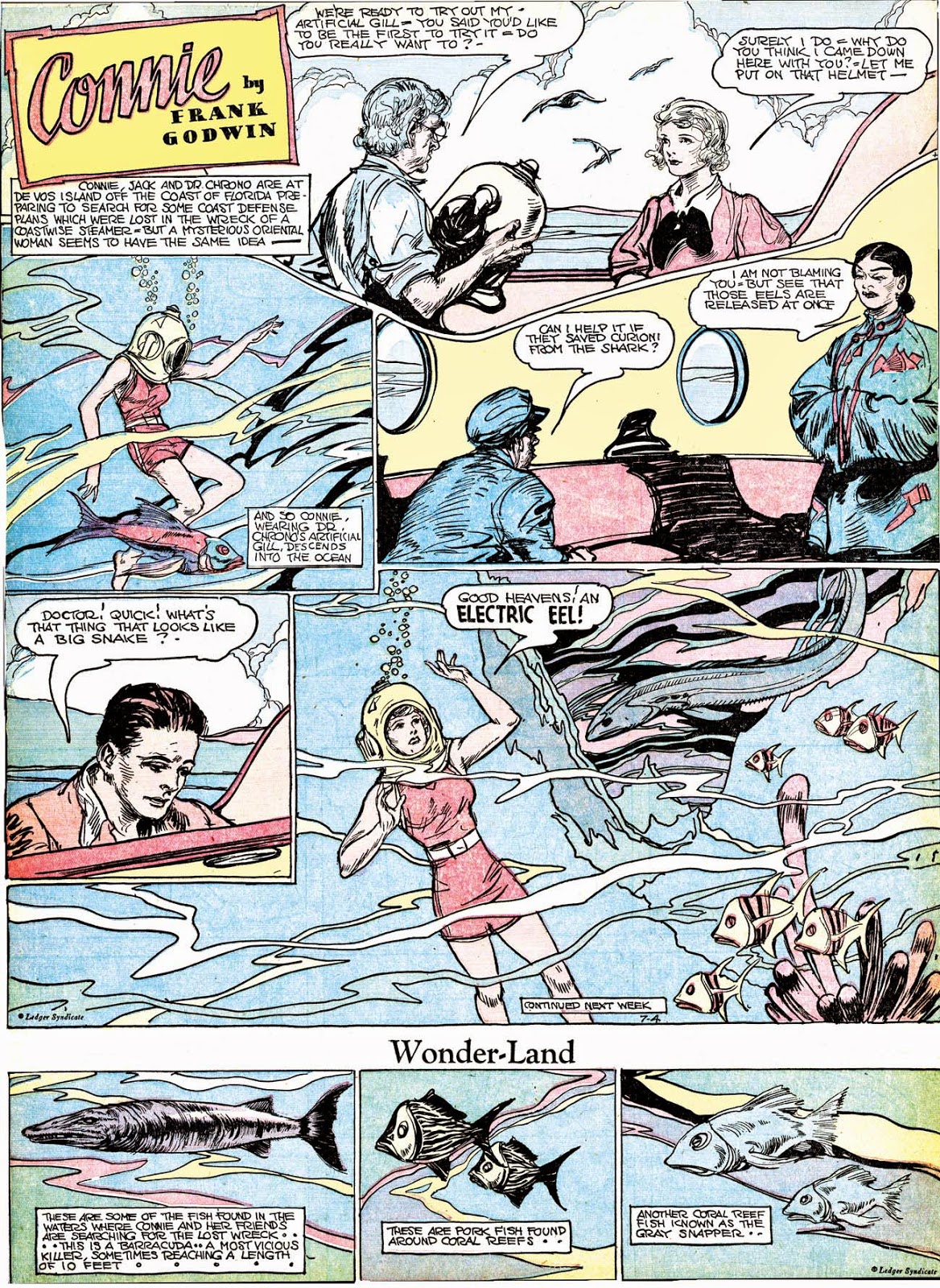 Obscurity of the Day: Babbling Bess 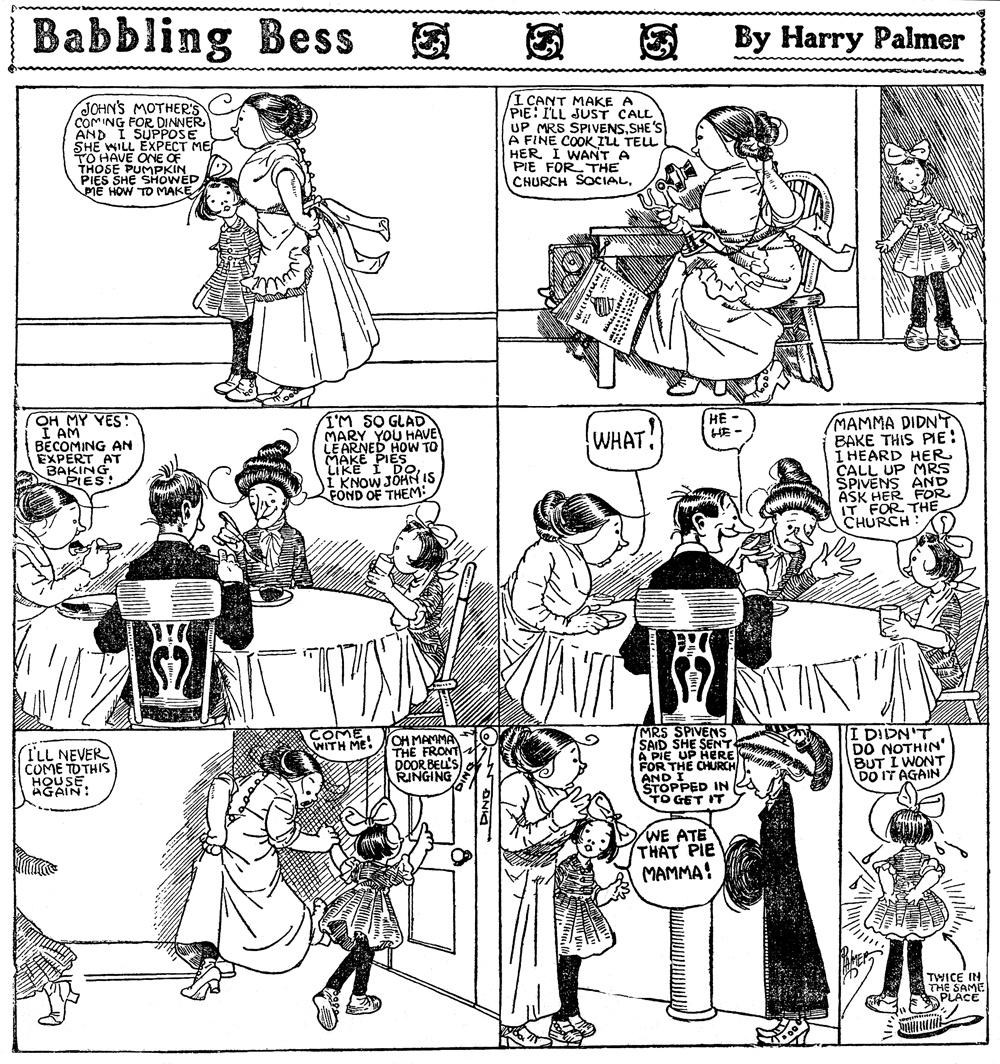 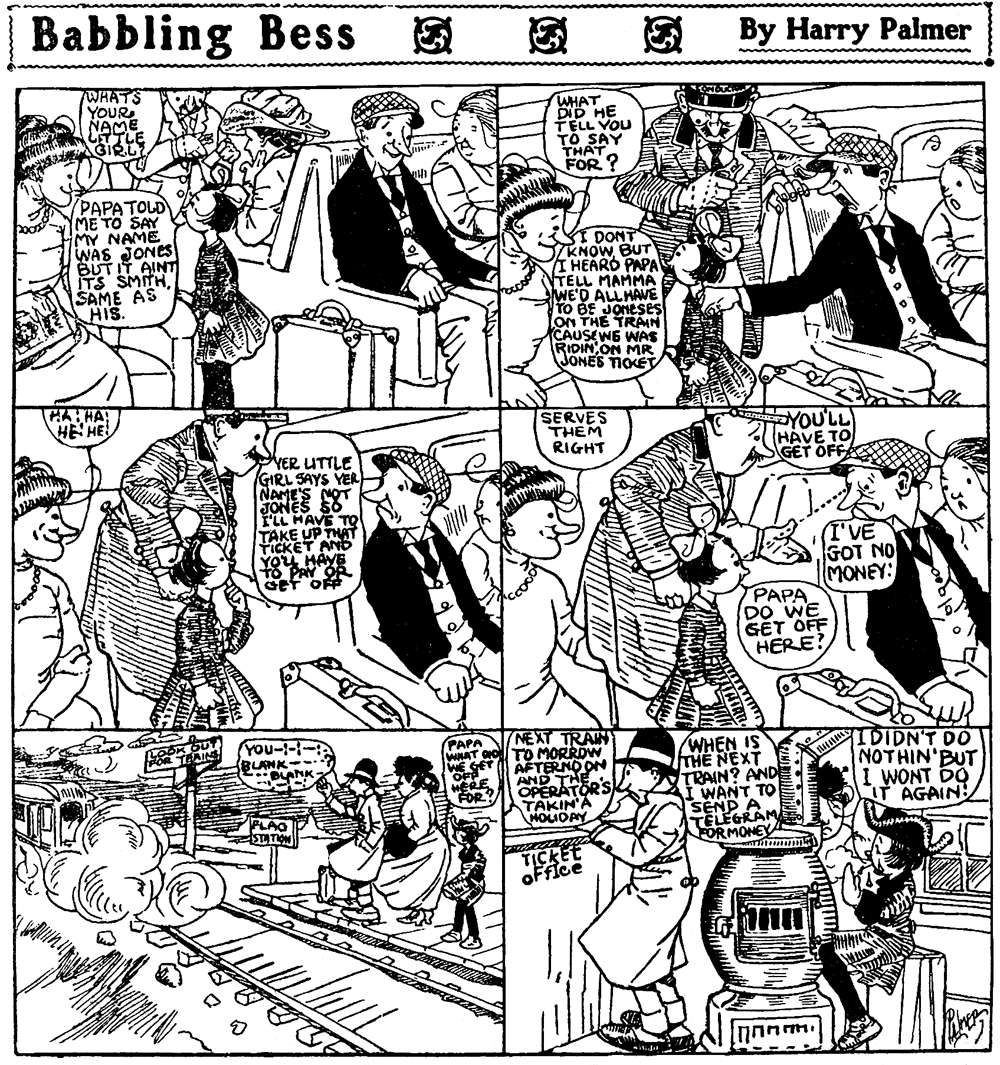 We just covered another Harry Palmer strip recently, Twas Ever Thus, and Alex Jay did his Ink-Slinger Profile. But like a bad penny, Palmer has shown up on my radar again, this time with by far his longest running creation, Babbling Bess. This strip ran in the New York Evening World for a very long engagement of over two years. Why it ran so long is a mystery to me -- it failed to include Palmer's trademark pretty girls, and was a one-joke strip to boot.

Granted, the art is delightful, and the joke, though now an old one, didn't have quite so much rust on it in 1909. But how many times can Babbling Bess say something out of turn to someone, getting the family in trouble? Lots and lots of times, evidently. The weekday strip ran in the Evening World on a semi-regular basis from November 11 1909 to April 6 1912.

Comments:
I am struck by how awkward the balloon placement is in the Sunday page Looks almost as if the drawing was completely finished, then balloons were pasted on by someone who tried to cover up as little art as possible.

News of Yore 1977: New York Times Puts a Toe in the Water


Tilting at windmills is undergoing a revival, at the New York Times Special Features Syndicate, at least.

Don Quixote, the classic "everyman" created by Miguel de Cervantes, has been reincarnated as the central character of "Don Q," a politically satirical comic strip that is the Times' first venture in the field.

Prominently featured as well are caricatures of real figures in the political limelight. President Carter, for example, appears dressed in a medieval tunic emblazoned with a peanut, flashing a broad, toothy grin, while Henry Kissinger wears a "Superman" outfit, a big "K" replacing the big "S."

These caricatures are what differentiate the strip from Gary Trudeau's "Doonesbury," said Gantz this week. "We provide commentary like Doonesbury but we also have actual people walking through the strip," he said. "But it isn't all politics. We deal with the everyday foibles of living."

The creator of the Herald Tribune syndicated strip "Dudley D,"'Gantz said he chose the Don Quixote theme because he has been "hung up" on it for thirty years, using it in sculpture, painting and book illustration.

"I feel that Don Quixote is everyman, the embodiment of all our fears, foibles, and expectations," he said.

"Don Q" originated a year and a half ago, the joint creation of Gantz and John Osenenko, manager of the New York Times Syndication Sales Corp.

It initially had a trial run in 40 papers, according to Osenenko, who worked with editors during this period to develop and refine the strip's satiric slant. Also uncovered was the comic's target audience: business, educational and higher income groups, and the 18-35 age group.

Now the Times is heavily promoting the strip, particularly in key markets with papers over 50,000 circulation, reported Osenenko. Stressing "Don Q" 's appeal as an effective communicator of topical messages, the syndicate is selling it as a feature for either the editorial or comic page. However, the Times "does not feel it belongs on the comic page," said Osenenko. "It doesn't fit into that league."

Secondary sales efforts will eventually be aimed at smaller daily papers, especially those in university towns such as Ann Arbor, Mich. And college newspapers and foreign publications will be approached as potential subscribers, too.

An unorthodox marketing approach is also being tried for "Don Q."

In addition to the print strip, Gantz is working on the pilot of an animated one-minute news segment featuring the character, intended for television news programs with expanded air-time. Involving Don Q with "whatever is current," Gantz plans to create the animated cartoon three times a week.
The Times, said Osenenko, expects it will take at least two years for the new strip to gain popularity.
"It took Superman two years to kick off," said Osenenko. "Many comics with new ideas take at least two years to get going."

The strip is currently carried by sixteen American dailies, including the Atlanta Constitution and San Antonio Light, and two foreign publications, one in Mexico and one in Tokyo. The New York Times will not carry it, as per the paper's and syndicate's joint policy.

[Allan's note: Though the article sort of makes it seem as if the strip recently came onto the market, it had actually been offered since September 1975]

Comments:
Hope better and further research proved that history of it for a Obscurity of the Day feature!

The late CARTOONIST PROFILES magazine had major articles on both the strip AND animated versions of this, with a healthy sample of the feature. lots and LOTS of characters. 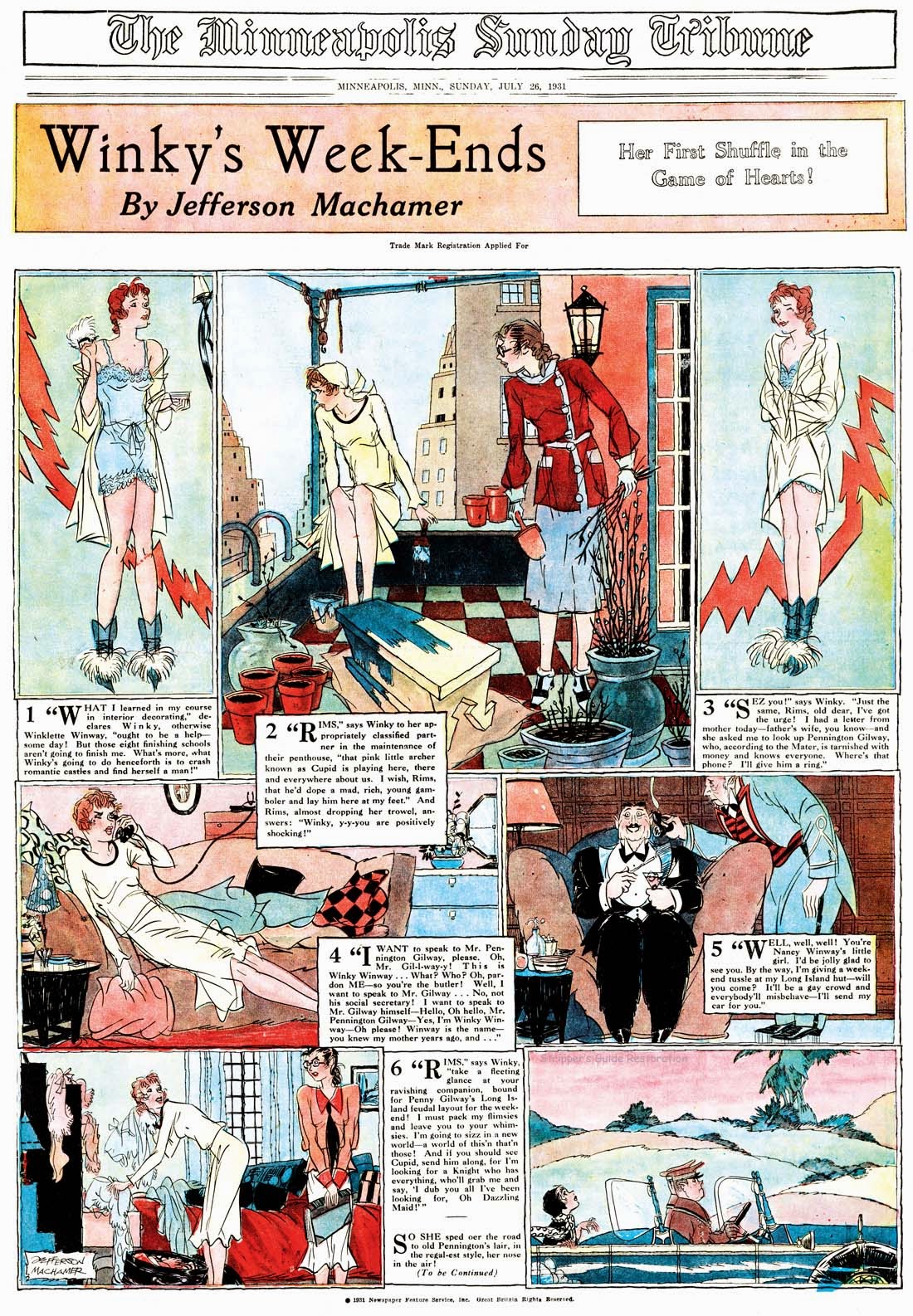 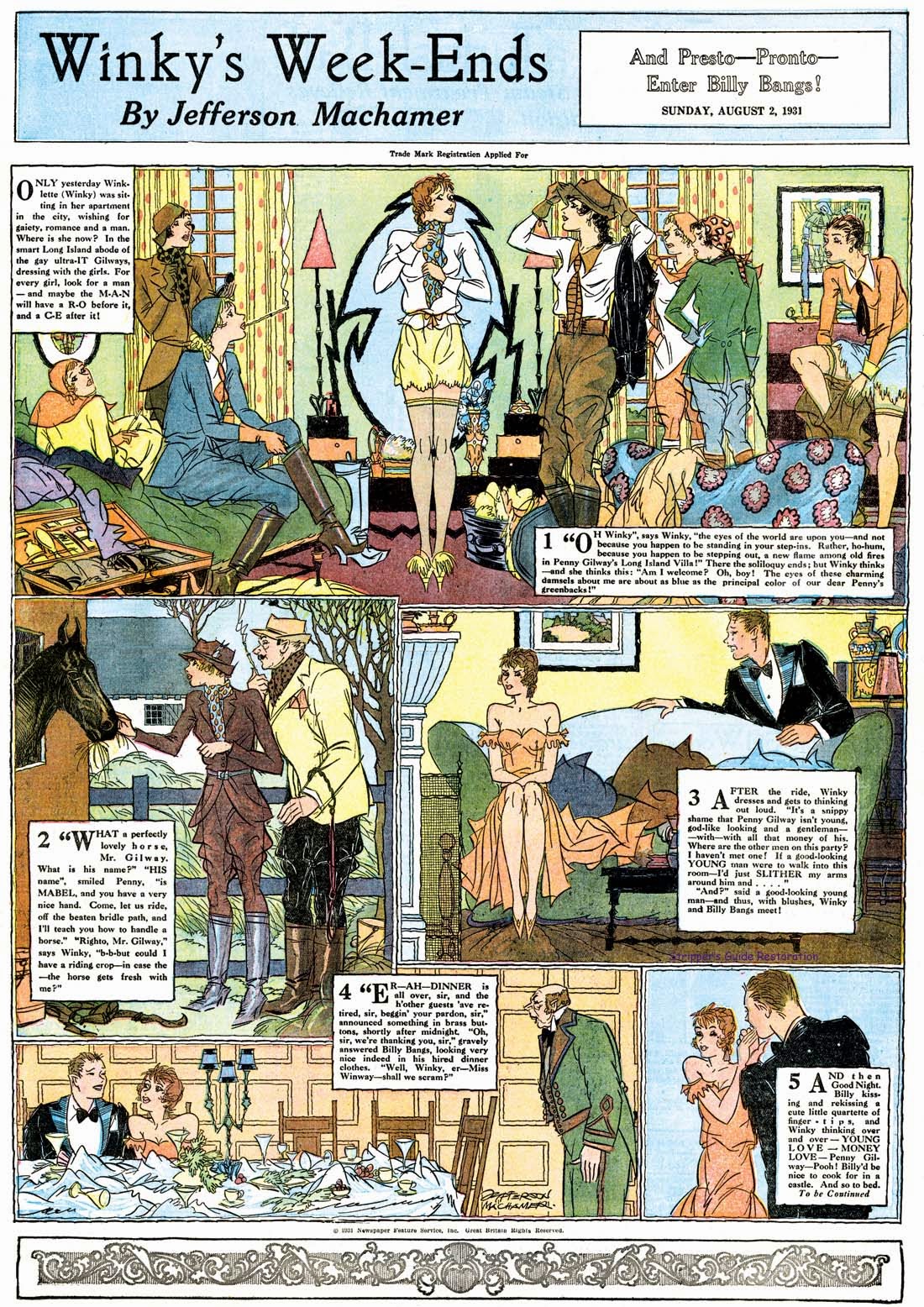 Jefferson Machamer didn't put a tremendous amount of effort into a storyline for Winky's Week-Ends, a magazine cover series he penned for Hearst's Newspaper Feature Service. No, Machamer really just strung together a bunch of vignettes about a city gal visiting a country manse to find romance. He used that as the prop on which to find more reasons than you can shake a stick at to peel Winky down to her delectable skimpies.

And who are we to complain? Not gonna look a gift horse in the mouth when it comes to skimpy negligee scenes, 'round here.

Obscurity of the Day: Billy Bragg 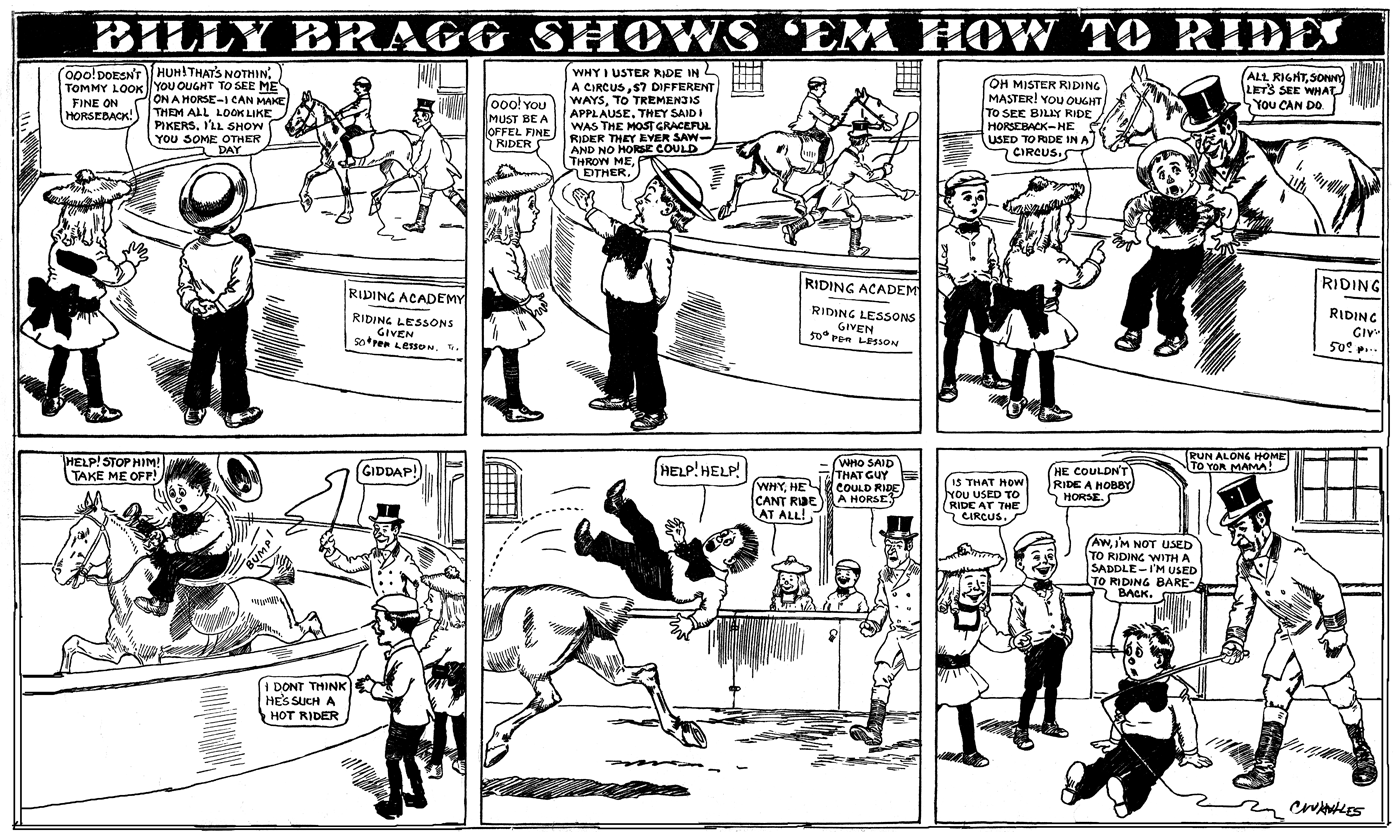 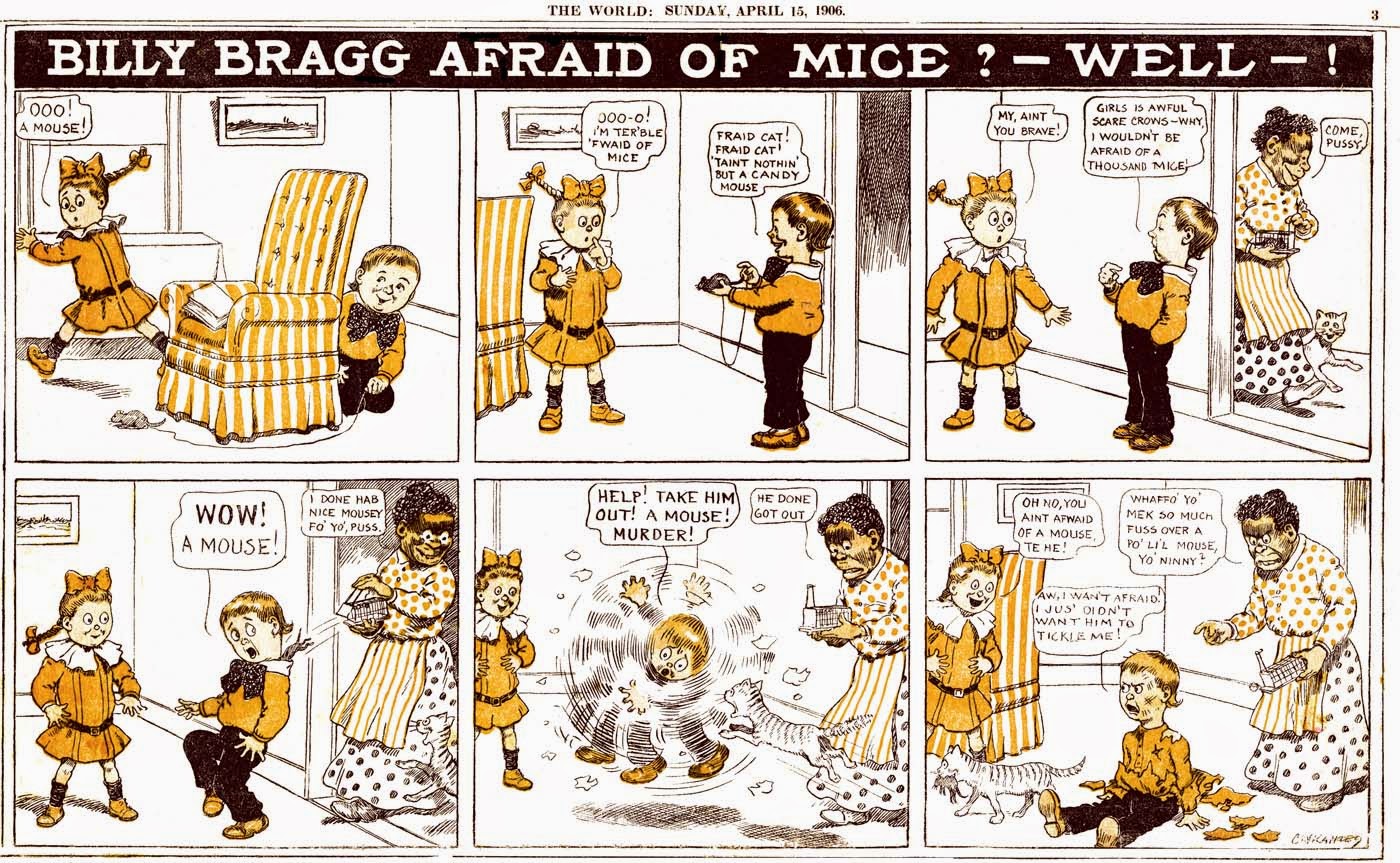 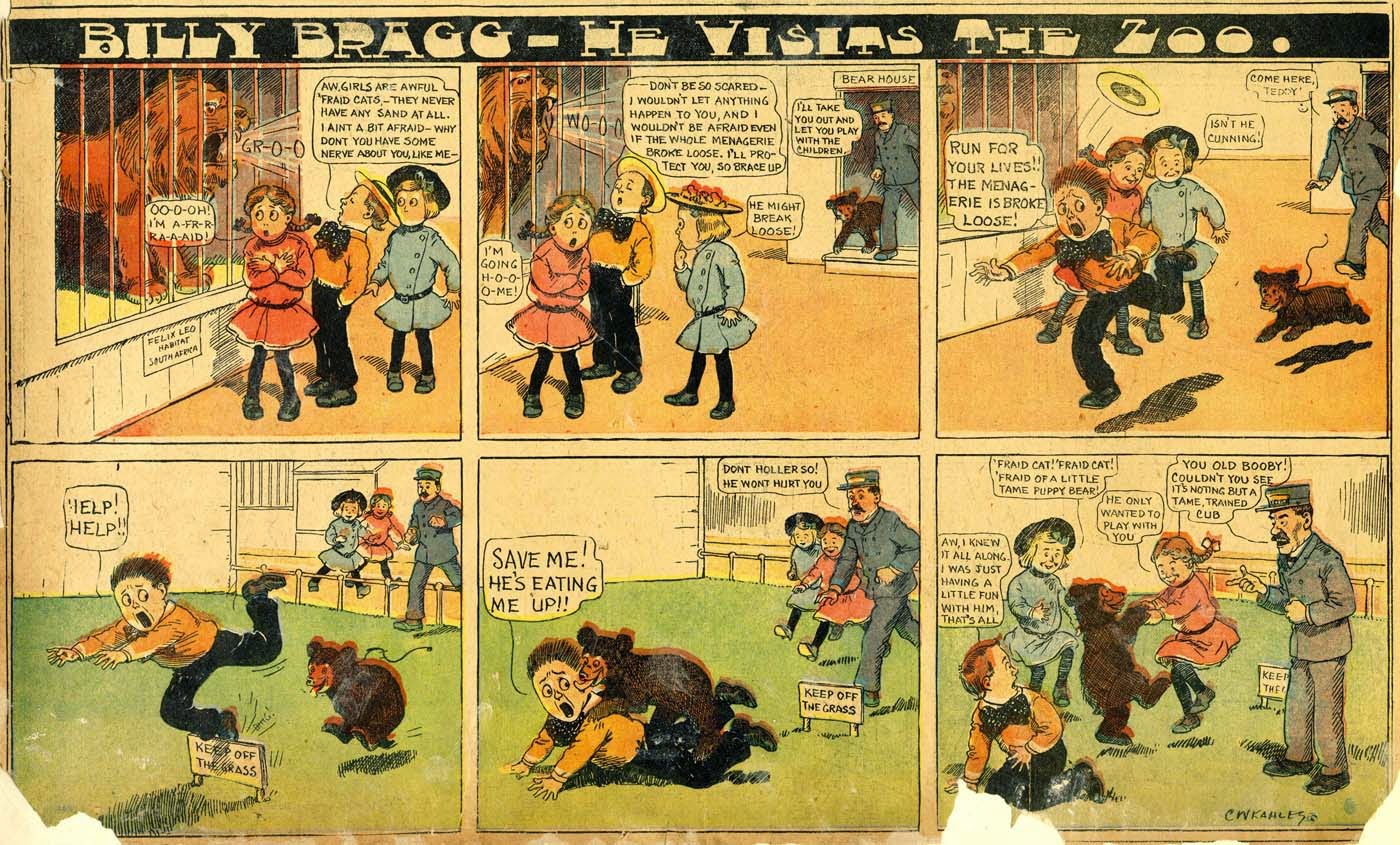 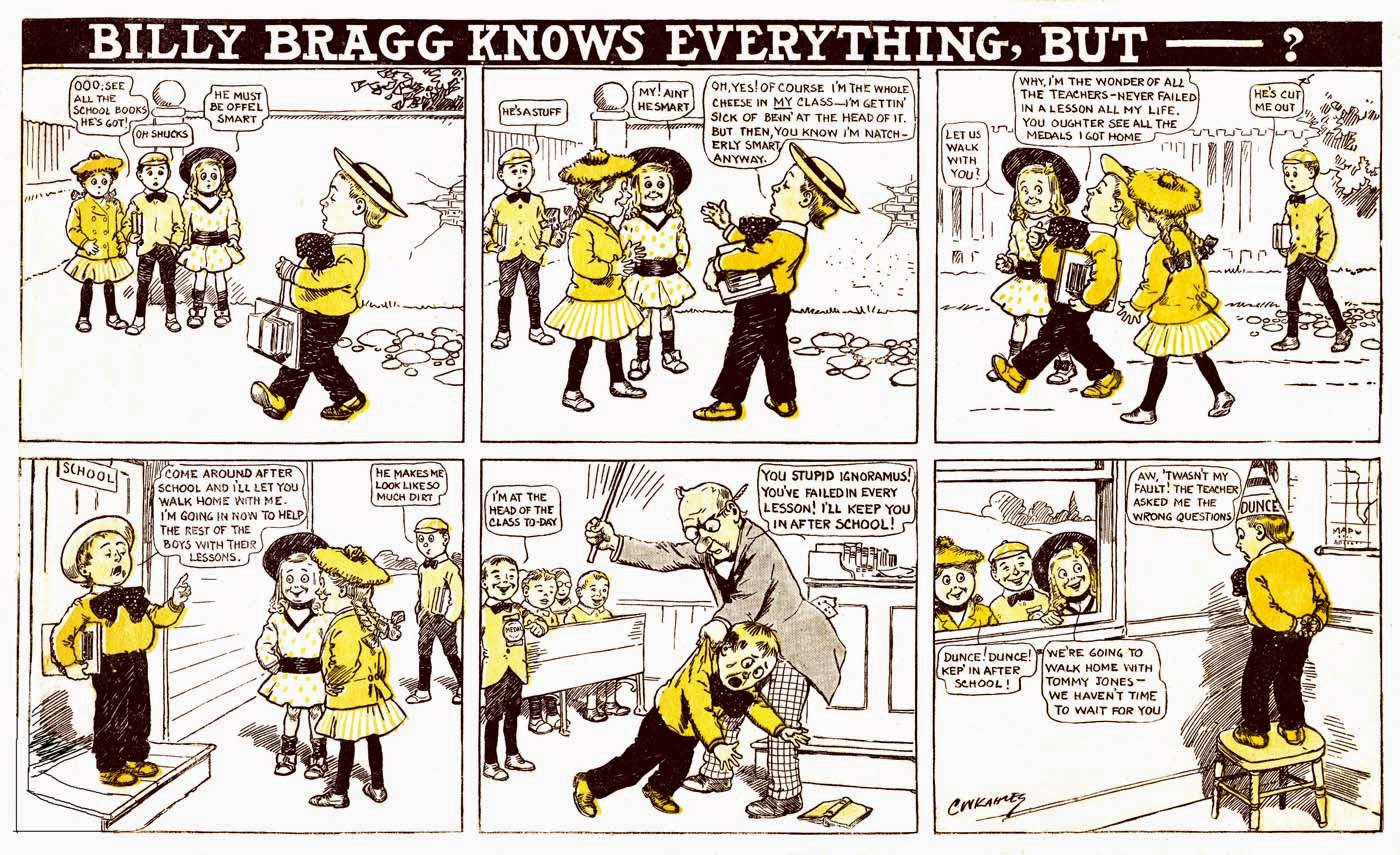 Okay. Now guess what happens when he brags. No, no, he doesn't win friends and influence people. C'mon. Try again. Yeah, now you got it! He gets his comeuppance.

Y'know, lots (okay, most) early comic strips were formulaic, but there's something about Kahles' strips that I find singularly tiresome (you noticed my ugly mood, didn't you). I think maybe it's the cadence. Kahles in this period only seemed to know one tune, and exactly one way to play it. The consistency from strip to strip -- the unfolding of the story in exactly the same rhythm, is what really grates on my nerves. All I can say, then, is thank goodness Kahles eventually reduced his output to the generally delightful Hairbreadth Harry. Maybe in the oughts he was just cranking out way too much material to give any one strip a much-needed shot of originality.

Much thanks to Cole Johnson for today's scans! 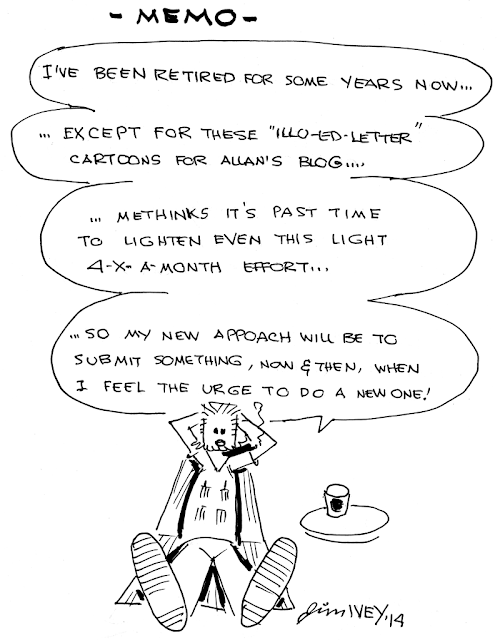 Yes, that's right, Jim has decided, for the most part, to take down his Sunday shingle here at Stripper's Guide. I know you will all join me in thanking Jim for his delightful weekly cartoons, which have been running here since March 25, 2007.

I never tire of Jim's reminiscences, his life lessons, his games and wordplay, and of course most of all his brilliantly simple cartoons. I will greatly miss his weekly appearances here, and I'm sure you readers will miss them too.I also appreciate, in terms that I cannot even put into words, what a great friend I have in Jim. In addition to all his other kindnesses over the years, these weekly cartoons that brighten up the Stripper's Guide website on Sunday have been a gift to me, and you, of stupendous proportion.

If you worry that at 89 years of age Jim is hanging it up for health reasons, put that out of your mind. Jim is, as he would put it himself, in fine fettle. He's definitely on his intended track of making it to at least the 99 year mark. Congratulations, then, Jim, for finally earning a well-deserved retirement after your 70 year cartooning career!

Jim has promised that Sunday Comics may continue to be created on an irregular basis, whenever the spirit moves him. We look forward to his occasional visits.

Comments:
I will miss Jim's weekly strips... but it will just make the new ones when we get them all the sweeter!

*applause for all the cartoons*

Thanks for the comics Jim! They've been a highlight of my weekends for quite a while now.