Friday, March 27 1908 -- Thirty-five amateur boxers crowded into the Los Angeles Athletic Club to show off their stuff in front of an appreciative crowd. The prize? A chance to fight for the amusement of the Great White Fleet if and when it arrives at L.A., and if and when the sailors therein are allowed liberty to see a boxing spectacle.

I gamely searched for every boxer's name in boxrec.com, but came up dry. Either none of these tyros ever went pro, or they used pseudonyms.

I'm still trying to figure out who got paired with that thirty-fifth boxer ... 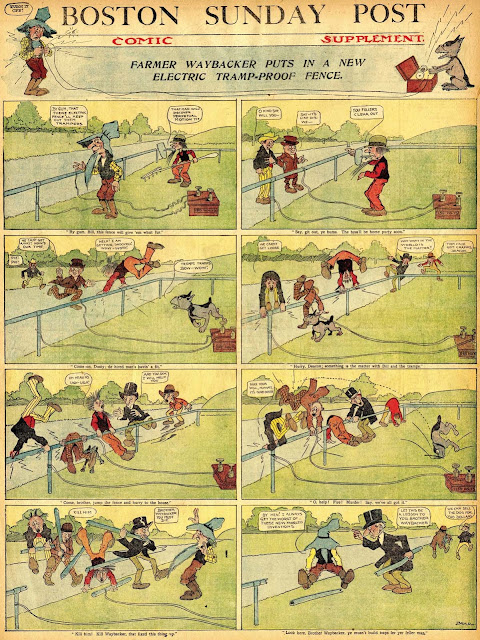 
Donald Gurnea “Don” Moore was born in Wheaton, Illinois, on October 2, 1918, according to Today’s Cartoon (1962). In the 1920 U.S. Federal Census, he and his widow mother were residing with his maternal grandmother, Alice Gurnea, also a widow and head of the household, and June, his mother’s younger sister. The address was 124 Chase Street in Wheaton. His mother, Jesse, worked at a can factory. A family tree at Ancestry.com said his father, “John J. Mohr”, died in 1919.

The 1930 census recorded him and his grandmother at the same address. The whereabouts of his mother is not known. The Courier-News, May 23, 2010, said he graduated from Wheaton High School in 1936.

In 1940, Moore’s grandmother and his Aunt June’s family, husband and four children, was part of the household at the same Wheaton address. The census said he had three years of high school. Today’s Cartoon said: “…When he started, in order to get his first cartoons printed in the Wheaton (Ill.) Daily Journal, he cut his own linoleum blocks. As a GI in the Army (before he was torpedoed) he sold cartoons to the Springfield (Mass.) Daily News, and the Boston Herald-Traveler….He admits of no formal art training….” Moore enlisted in the Army on April 30, 1941 according to a military record found at Ancestry.com. The Courier-News said he “…was one of the 12 survivors aboard the USS Cherokee returning from Iceland, when it was struck and sank by a German torpedo, from which he received the Purple Heart….” The Springfield Daily Republican (Massachusetts), July 10, 1943, reported on Moore a year after the sinking.

Blood Plasma Value Cited from Experience
Corp. Don Moore, cartoonist, addressed a meeting of the board of directors of the Springfield chapter, American Red Cross, yesterday, and demonstrated by a recital of his own case the infinite value of blood plasma in warfare.

Corp. Moore was aboard a transport torpedoed in the North Atlantic a year ago last May and after spending five hours in the water was picked up by another boat. Plasma was administered immediately. His injuries included a fractured skull, punctured lung and several broken bones. After five months in the hospital he returned to duty and is now in this city, where he is a plant guard instructor.

The army and navy have requested 4,000,000 pints of plasma from volunteers for this year. Speaking in behalf of this request Corp. Moore said:—

“The time and effort of those donating blood is well repaid by the lives of those saved in the army and navy. It’s hard to tell the amount of personal comfort men in the service feel when they know there is plasma on hand, as there always is.”

Today’s Cartoon said, after his discharge, Moore was an assistant to Wilson McCoy who was drawing The Phantom. “I did the background and lettering,” Moore said. The exact date of his time on the Phantom is not known. An August 1948 issue of Editor & Publisher noted the following: “New on Western Newspaper Union’s list are three features: Did’ja Hear? a gag panel illustrating news oddities: Looking at Religion, by Don Moore, depicting colorful religious facts, and Carl Starr’s Weather Vane, which pictures weather lore.”

“Since 1950 his editorial cartoons have appeared regularly…in the Waukegan (III.) News-Sun...”, according to Today’s Cartoon. The Courier-News said he married Carole Collingbourne on April 14, 1951. Moore operated his own syndicate which was listed in Editor & Publisher Syndicate Directory (1953) and The Working Press of the Nation (1954):

In Today’s Cartoon, Moore said: “I call the Waukegan paper my home base…But actually I’m a free-lancer. I’ve done about 7,500 editorial cartoons for the News-Sun, all on a fee basis. Then, I also draw cartoons for others: The Kenosha (Wis.) Evening News, The Wisconsin Agriculturist, The Evanston (Ill.) Review, The Winnetka Talk and The National Humane Review have all used my stuff.”

His mother passed away in 1963, according to the family tree.

The Quill (1973), a publication of the Society of Professional Journalists, Sigma Delta Chi, noted the results of an election: “Don G. Moore, editorial cartoonist for WGN-TV, Chicago, has been elected president of the Northern Illinois Professional chapter, DeKalb….”

Moore passed away May 21, 2010, in Elgin, Illinois. The Courier-News reported his death.

Comments:
How did you differentiate THIS Don Moore from the Blue Book / Flash Gordon one?? I hope you're planning to look at the other one someday :) - Art Lortie 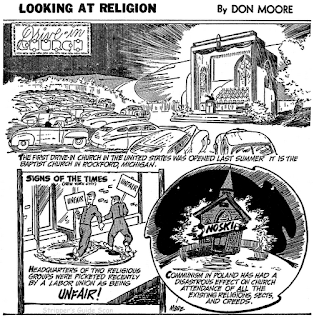 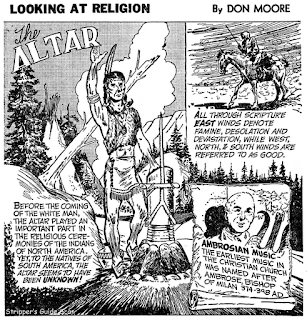 
Louis Edward Donahoe was born in St. Louis, Missouri, in July 1880, according to the 1880 and 1900 U.S. Federal Censuses. In the 1880 census he was recorded as Edward, the fourth child of Charles, a notary public, and Philomane. They lived in St. Louis at 3614 North 18 Street. Information about Donahoe’s education and art training has not been found.

The St. Louis Republic, April 14, 1896, reported the death of his father, who was a lawyer and lived at 1314 North 20th Street. On April 21, the Republic said the police held a suspect for homicide in the death of his father. The Kansas City Daily Journal (Missouri), October 23, 1896, noted that a pension had been granted to his mother.

Donahoe was listed in Gould’s St. Louis Directory 1899 as an artist residing at 1100 Madison.

In the 1900 census, he lived with his mother, and two sisters in St. Louis at 1519 Hogan Street. His occupation was artist. He produced Caseyville for the St. Louis Star in March 1901. The Republic, October 5, 1902, reported the upcoming exhibition of newspaper drawings.

Oils, Water Colors, Sketches and Cartoons Will Be Shown.
…The Newspaper Artists' Society was organized with the primary object of the general betterment of the art of newspaper illustration, for an increased fraternal and feeling of good fellowship among the cartoonists, and with the hope of ultimately effecting a permanent institution. To this end this first exhibition will be given. The following artists form the Committee of Arrangements:

Louis E. Donahoe, aged 28 years and 10 months, died in St. Louis on Friday, May 14. He was a son of Philomena and the late Chas. E. Donahoe, and brother of Mrs. Louise Klie and Elmer, Hattie and Flora Donahoe. 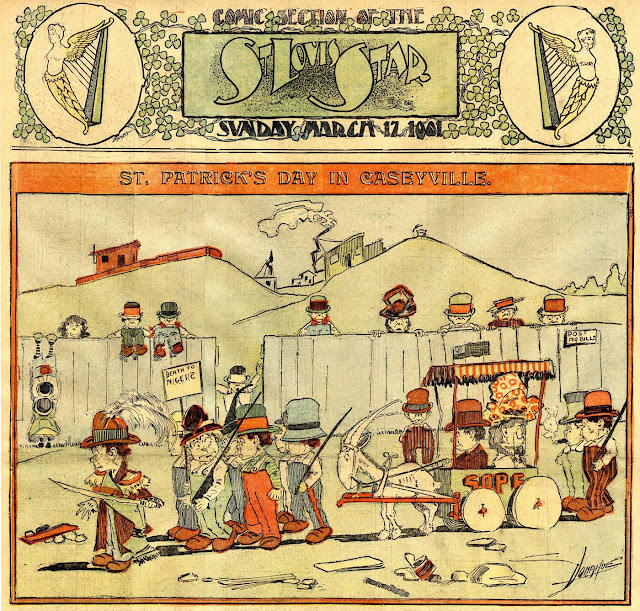 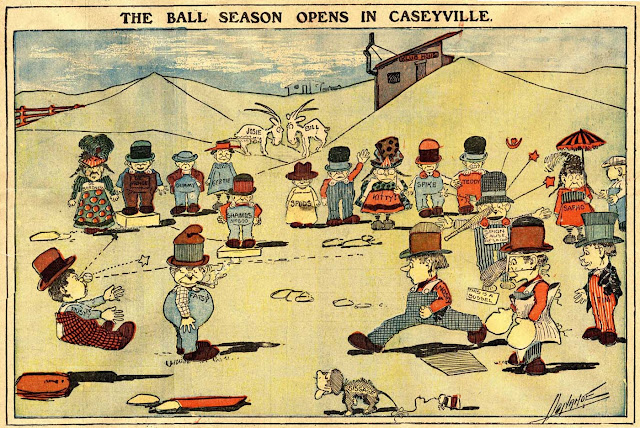 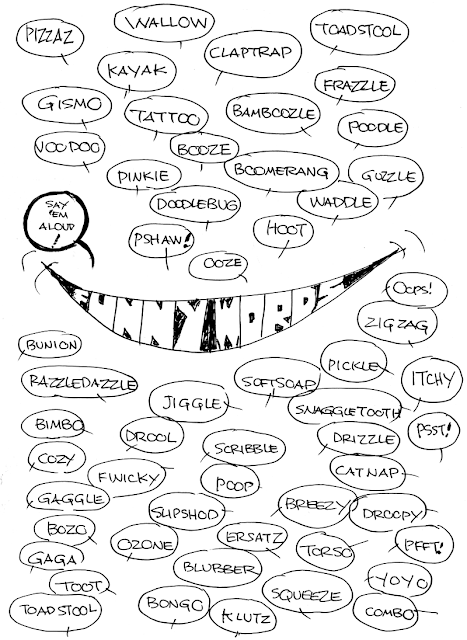