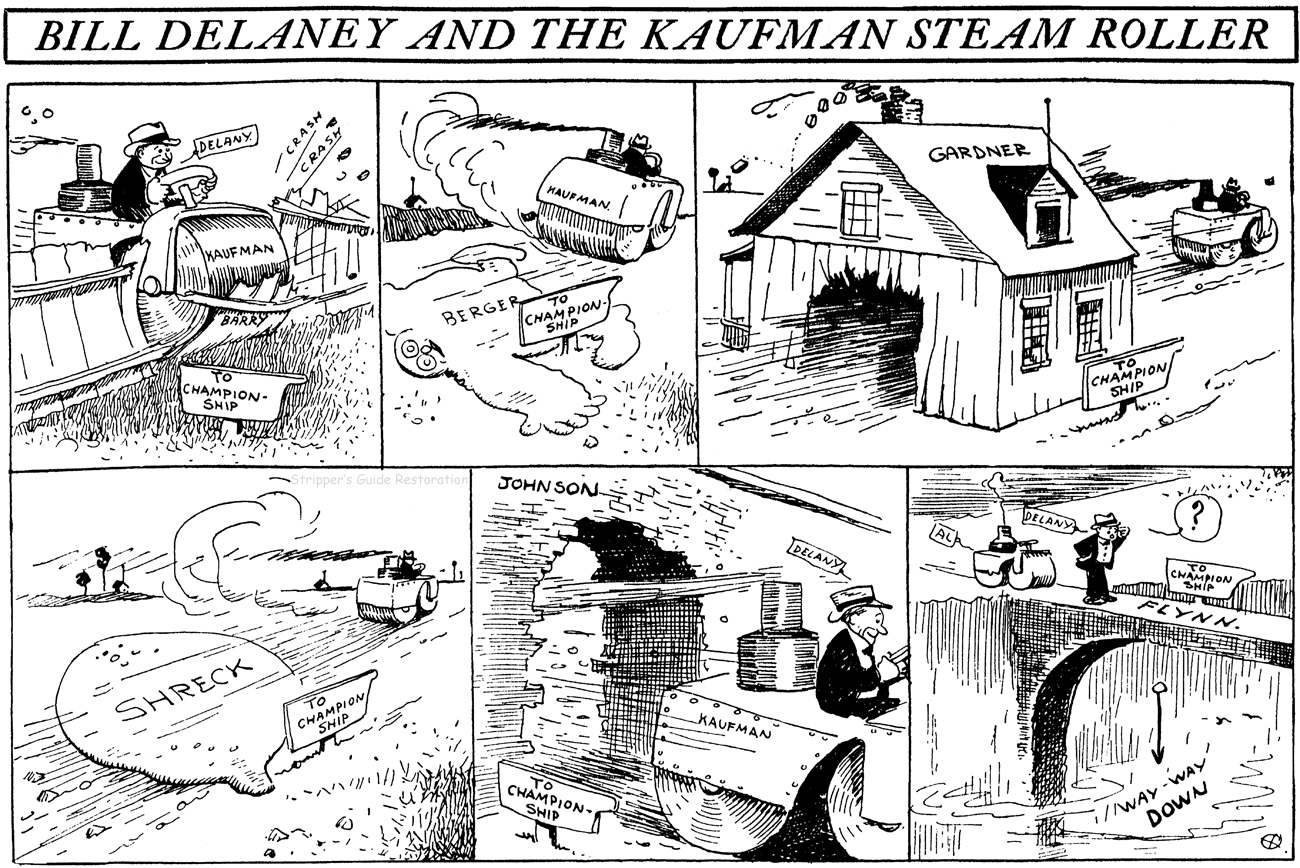 Sunday, August 23 1908 -- Fight manager Bill Delaney believes he has the next heavyweight champion of the world with this boxer Al Kaufman. Kaufman certainly does seem nearly unbeatable, and just as Herriman shows above, has beaten Dave Barry, Sam Berger, George Gardner, Mike Schreck and Battling Johnson, among others, in what sure seems to be the road to a crown.

Will his record remain unblemished when he faces Fireman Jim Flynn on Tuesday? According to the betting, Flynn hasn't a ghost of a chance. Bookies can't even stimulate betting by offering odds on Flynn merely making it to the 8th round.

Since Herriman won't be revisiting this fight for a cartoon, I'll not leave you hanging -- not only did Flynn last until the 8th, he looked like he had Kaufman on the run. In the ninth round, though, Kaufman finally tamed Flynn and knocked him out. 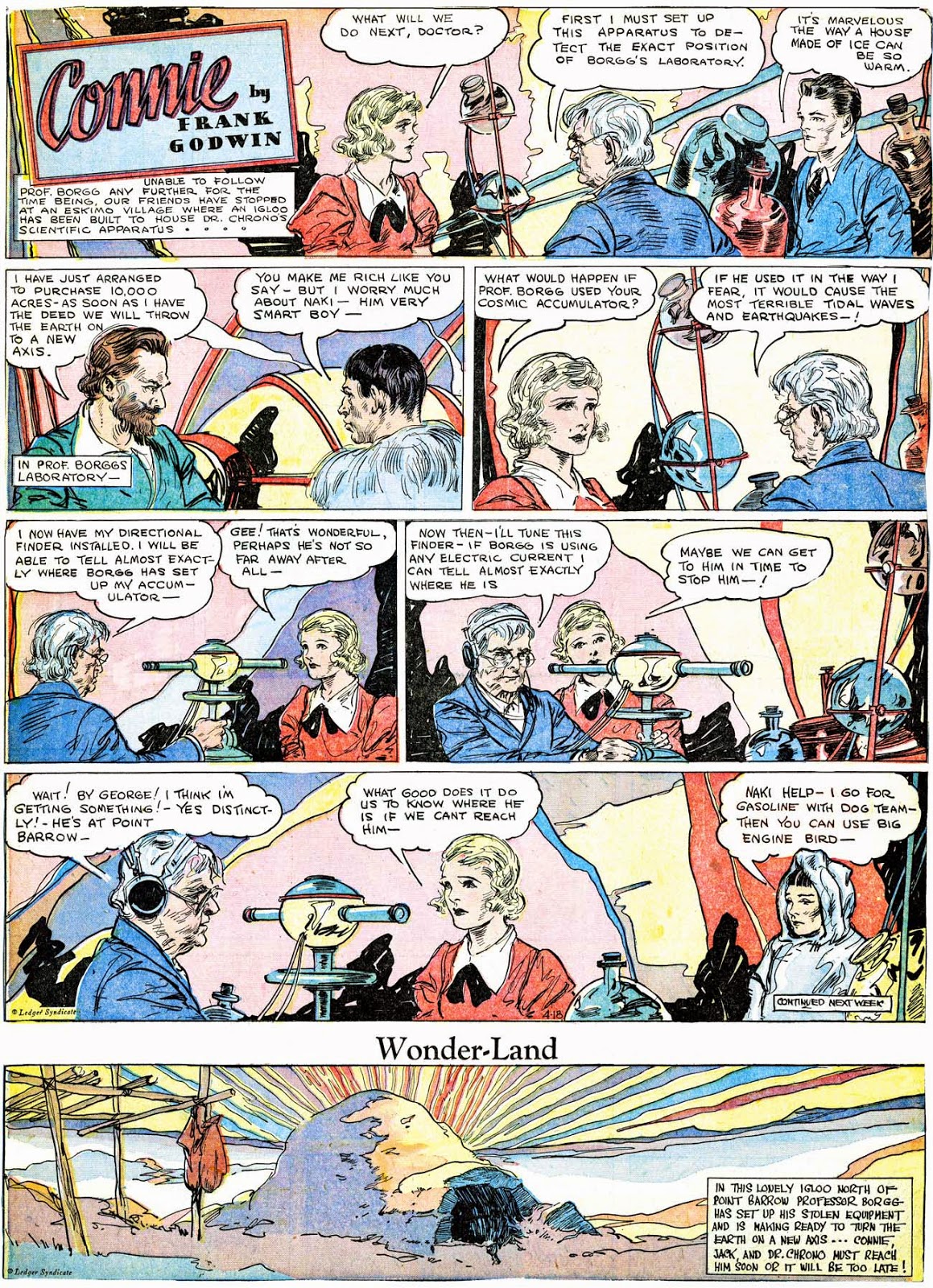 George Kennan Storm was born in Jonesboro, Arkansas on July 7, 1893, according to his World War I and II draft cards at Ancestry.com. In the 1900 U.S. Federal Census, he was the only child of Oliver and Flora, who lived in Thayer, Missouri. His father was a trainmaster.

In 1910, they lived in Enid, Oklahoma at “401 West OK St”. His father was a train dispatcher. Information about his education and art training has not been found. The Cook County, Illinois, Marriages Index, 1871-1920, at Ancestry.com, said he married Rose Mary Vennink on May 15, 1916. He signed his World War I draft card on June 12, 1917. He lived with his wife and child at 1807 Warren Avenue in Chicago, Illinois. He was a designer at the “Savine World Pub Co 608 S. Dearborn St”. He was described as tall and slender with dark brown eyes and black hair. According to a profile at the Action Figure Museum, Storm “…worked for an Oklahoma weekly, migrating to Chicago, working for the Herald. In 1919, he moved on to the San Francisco Examiner and Chronicle and later to the San Francisco Daily News….”

Storm has not been found in the 1920 census. He was listed in the Index to Great Register, Volume 2, Districts 25, 26, 27, 1920 for San Francisco County; he was a reporter and Democrat who lived at 1086 Fulton. In the Supplemental Index 1923, he was a cartoonist and Socialist at the same address. His cartoons were widely distributed. 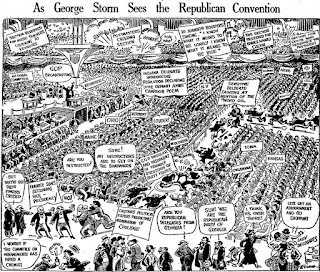 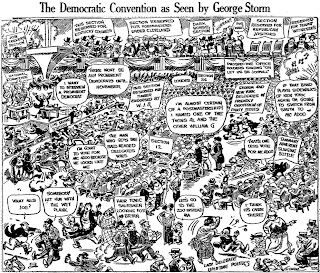 The Action Figure Museum said, “…After five years of drawing local cartoons in San Francisco, he won a job on the New York Mirror, drawing a panel cartoon series, ‘Little Old New York in Pictures.’ In 1925, he met newspaperman-author Jay Jerome Williams and this resulted in the creation of a newspaper strip for the Bell Syndicate, ‘Phil Hardy’…” The strip was titled Bound to Win in the Richmond Times-Dispatch (Virginia), which published the entire run from November 23, 1925 to October 25, 1926. 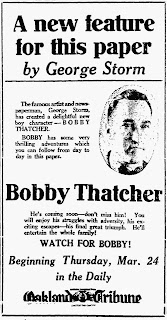 He has not been found in the 1940 census. He signed his World War II draft card in April 1942. His address was 712 Lexington Avenue, New York City. He named his mother as his closest relative, who resided in Enid, Oklahoma. The description of him was 5 feet 10 inches, 185 pounds, with brown eyes and black hair. According to a family tree, at Ancestry.com, his wife passed away in 1947.

Storm passed away in June 1976, according to the Social Security Death Index, which said his last residence was Enid, Oklahoma.

Obscurity of the Day: Don't Let the Camera Fool You 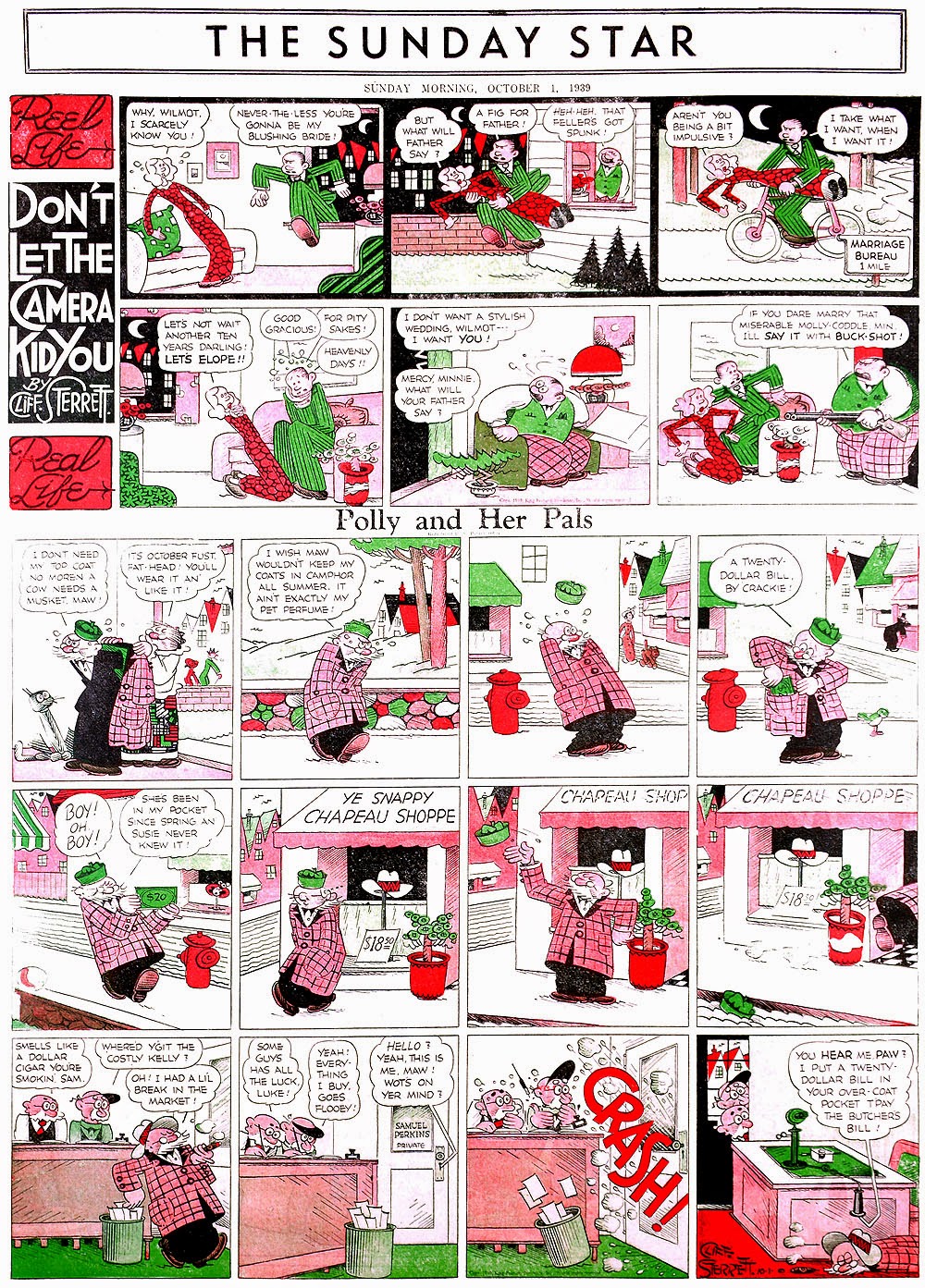 If you are a big fan of Polly and her Pals, Cliff Sterrett's family strip that sports wildly stylish art, you may know that there is a problem with collecting the Sunday strips. Starting with the Sunday of April 12 1936, the topper strips to Polly (Sweethearts and Wives/And So They Were Never Married) were only included with the broadsheet full version of the strip. The tabs, which until then had included both Polly and topper, dropped the topper in order to print the main strip's panels at a larger size.

That unfortunate decision means that a serious Polly collector has only one format that affords them a complete version of Sterrett's strips: the broadsheet full. To make matters much worse, by 1936 full page versions of strips were getting scarcer and scarcer, as most broadsheet newpapers switched to using half-page format Sunday strips. A few major strips would still rate a full page in the late 1930s, but frankly Polly (as much as we appreciate the strip now) was not really an A-lister back then. In a nutshell, finding Pollys from the late 30s and 1940s with toppers intact is as tough as finding a Dilbert t-shirt at the King Features Syndicate's Christmas party.

To give you an idea of the scarcity -- while I am by no means a Sunday Polly collector, I do know to snatch up late Polly fulls when I happen to chance upon them. Yet I have just two fulls from 1938 and later in my collection.

Okay, so now the preamble is finally out of the way. Why I am telling you all this is to make sure you can properly appreciate the rarity of what you see above. Collector Greg Matthews sent me this image, asking why this topper titled Don't Let The Camera Kid You (or Reel Life / Real Life) wasn't included in my book. I was, of course, very  surprised to see that Sterrett, seemingly out of the blue, decided to run a different topper in 1939 for awhile, and asked Greg for any information he could offer. Greg told me, based on his own collection of Indianapolis Star fulls, plus Sandusky Register material he found online, that this topper ran off and on in 1939, on these dates: 7/16, 7/23, 7/30, 8/13, 8/20, 9/24 and 10/1/39.

So there you have it. Just goes to prove that even a relatively popular strip from a major syndicate can be the source of an obscurity of the day, and an especailly rare one at that. I don't doubt that there are other rare late Sunday toppers out there that have so far escaped my detection. Have you seen one?

Big thanks to Greg Matthews for the information and the scan!

Comments:
When cartoonists drew these color full pages....what size did they draw them?

Hi Joe --
Newspaper cartoonists generally draw originals about 1.5 to 2 times printed size, but there's plenty of exceptions. Colors are applied later in the process, generally cartoonists do not color originals, except sometimes a color guide. You can see thousands and thousands of examples of comic strip original art at the Heritage Auction website, and on comicartfans.com. 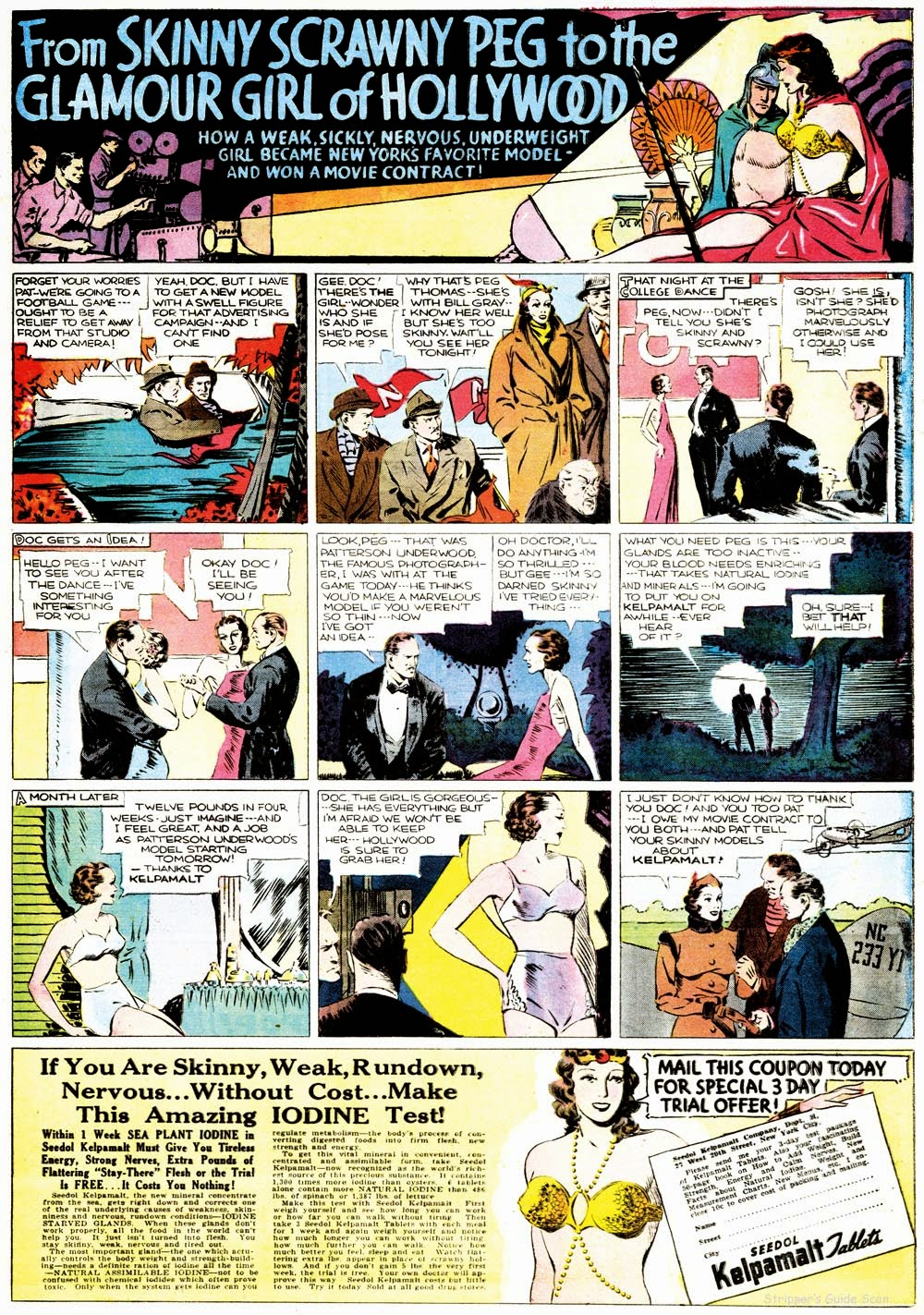 Another Alex Raymond-inspired iodine weight gain ad from 1937. This one looks to be a lot more 'swipey' than the ad I showed yesterday. That one seemed like it could be Raymond in a hurry. This one looks more like a Raymond copier in a hurry. Whatcha think?

Comments:
Looks like the same letterer as Flash Gordon/Jungle Jim

I don't think this is Raymond. Both pages look like they were made up with swipes from Secret Agent X-9 strips. Lettering is *not* by Laurence Crossley (Raymond's uncle), who did a wonderful job on Flash Gordon, Jungle Jim, and X-9. It might be Austin Briggs ghosting for Raymond, but lettering doesn't look like Briggs' either.

Alex Raymond Wants to Help You Gain Weight, Part I 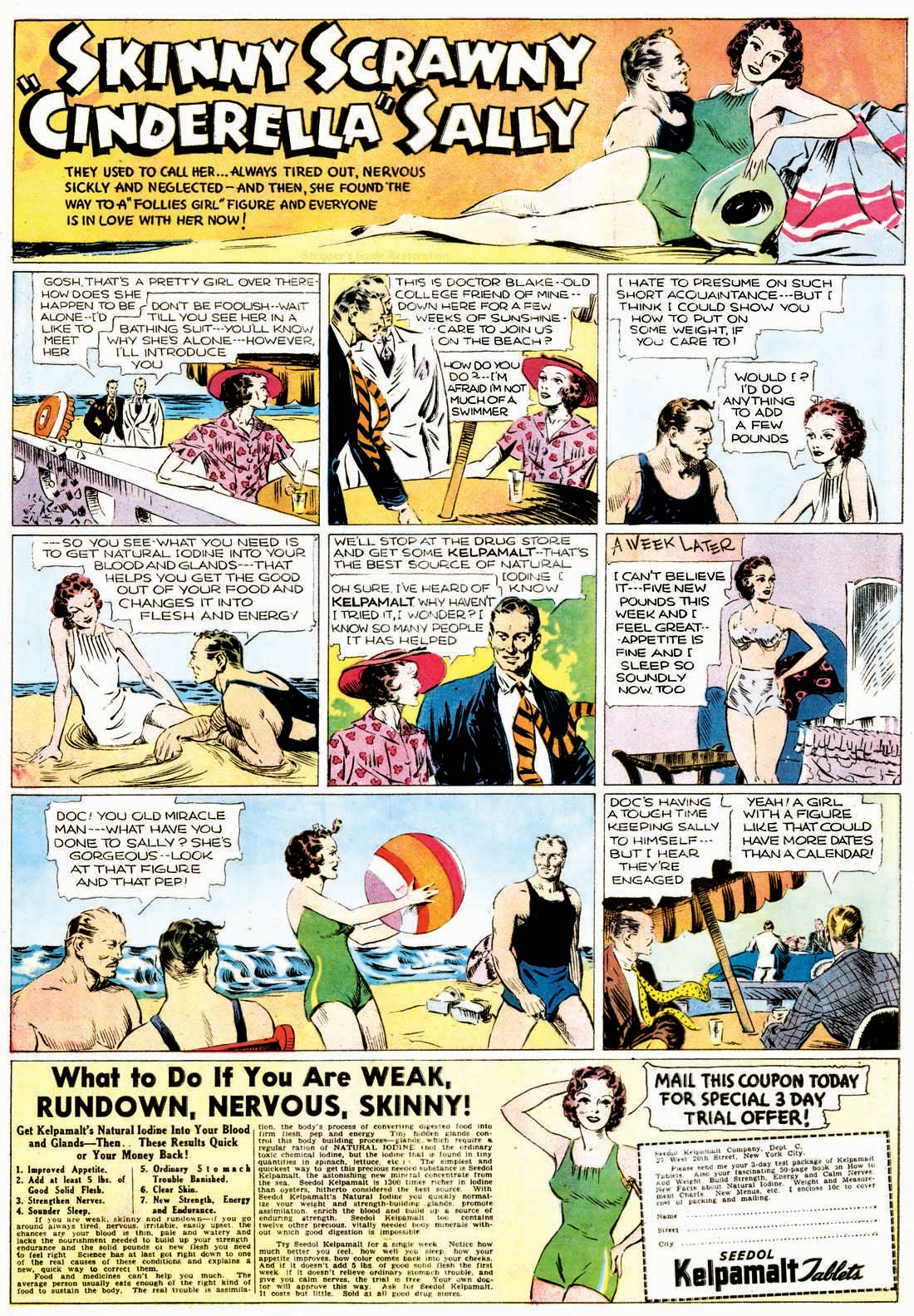 Poor Cinderella Sally, she's cursed with a fashion model's body. Plus she's not the smartest cookie -- she's heard of the wonder tablet Kelpamalt, knows many people who have benefited from it, but for some reason could not apply that vast amount of data to solving her own problem.

Once Sally puts on those va-va-voom pounds, she consents to wed Doctor Blake, who so kindly drew a logical line from A to B for her. But Sally's not just logic impaired. She's also unclear on the idea of engagement, as apparently Doc's having a tough time "keeping Sally to himself". For shame Sally!

Anyhow, the effectiveness of iodine-enhanced weight gain (which apparently is a real thing) is not our question today. No. The question regards the art on this Sunday comics advertisement from 1937. Is it by Alex Raymond, or Raymond-inspired (swiped, to be blunt about it). My question: which is it?

Tomorrow we'll have another ad from this series, also highly Raymond-inspired in the execution.

Comments:
I say Raymond-inspired.
The girl in panel two (first panel of story proper) hardly looks Raymondesque.
The artist seems to have trouble with hands/fingers. Certainly hid them in this sample.
D.D.Degg 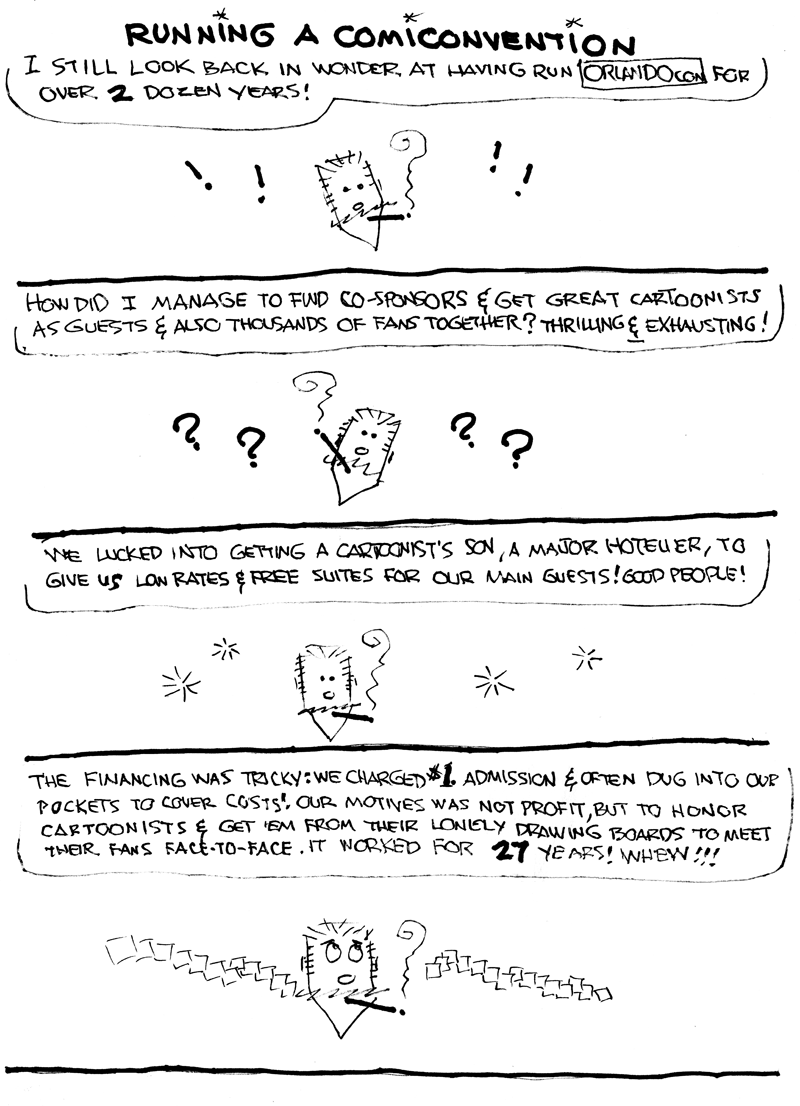 Comments:
Man, I love OrlandoCon. You put on the best shows ever. The con that comes closest to that feel is HeroesCon. Please share more OrlandoCon stories.