Saturday, May 16 1908 -- The fracas at the Democrat's convention a week earlier -- the one that Herriman totally missed by scooting out a little early -- has snowballed a bit. Now there are rumors, probably started by chairman Schwamm, that Dick Warner got a knuckle sandwich at some point in the rather loud disagreement.

The fact that Herriman went five days without a cartoon in the Examiner indicates that he was probably very deep in the doghouse for missing out on the excitement at that meeting. I wouldn't be surprised if he was suspended. 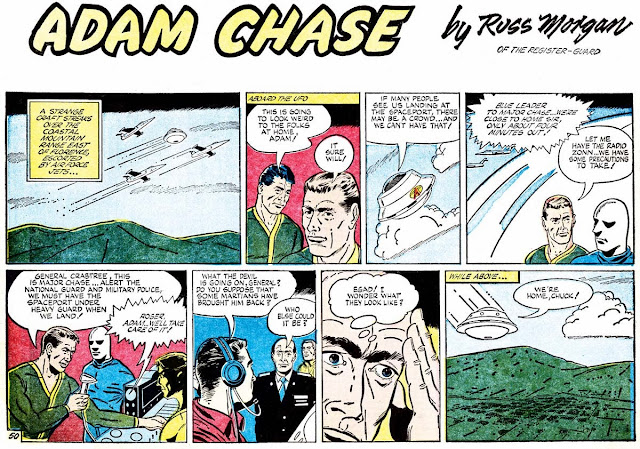 Adam Chase strip #50, originally published May 14 1967. For background on the strip and creator, refer to this post.

Comments:
Sorry to hear that Year Two is not available been enjoying the strip

Yes. I am sorry about the logistics. It is quite excellent!

Wouldn't muddy-colored micro downloads, (blended in with Russ' b/w proofs) be better than nuffin' at all? You would still get the whole story.

As a replacement for Adam Chase, how about Obscurity worthy early SF like Speed Spaulding, Don Dixon and the Hidden Empire or Rod Rian of the Sky Police? If none of them are worth the effort, how about one of the peculiar Bungle Family sci fi storylines?

Cole -- I don't have ready access to the Eugene Register-Guard microfilm, so it's an academic question whether it would be worthwhile.

Andy -- Those are all PERFECT ideas for continuing Sci-Friday. Unfortunately I do not have anywhere near complete runs of any of those strips to scan.


I have most, if not all, of Don Dixon; lots in color.

Garth from the UK??

There were SF storylines in Abbie and Slats, Bungle Family and Scorchy Smith.

Oh I know!! Speculation from Closer Than We Think!!!

Hi Art --
I really enjoy the campy fun of Closer Than We Think. But I sold most of mine and didn't think to scan them first. How dumb is that!

As to Don Dixon, I would be VERY interested in running that if you can provide scans of a good long run. I suspect we might be able to find an occasional fill-in date if necessary. Please contact me privately if you really want to do this. 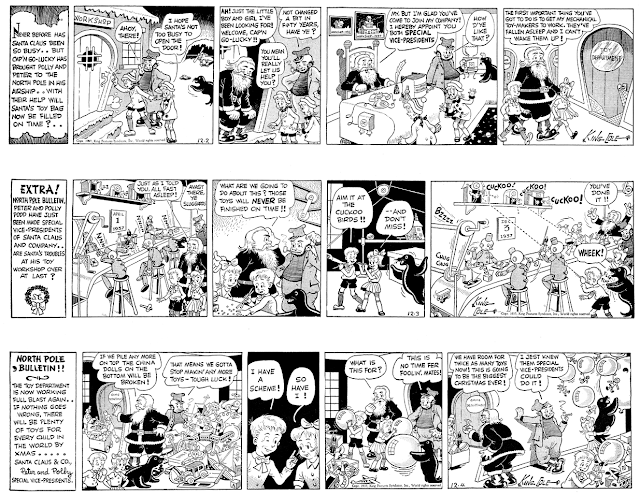 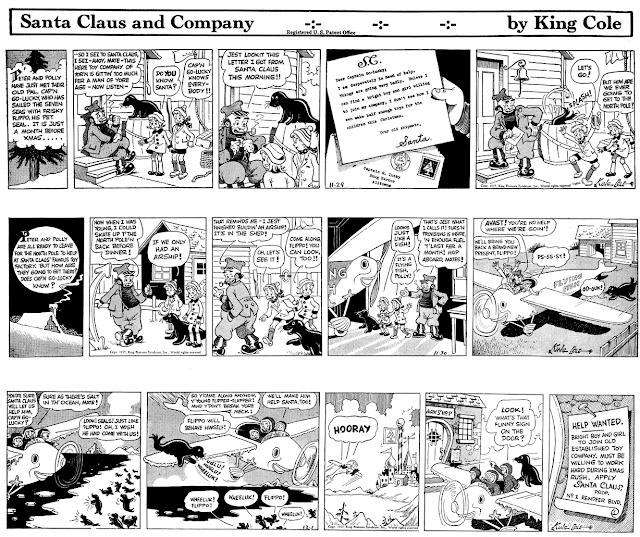 Starting tomorrow we will begin a complete reprinting of the 1937 King Features Christmas strip, Santa Claus and Company. The strip was penned by Royal King Cole, who did a number of these holiday short-run strips. Cole always had a knack for bringing the surreal and bizarre to these strips, and Santa Claus and Company is certainly no slouch in the department of being kookie. I think Mr. Cole might just have been an early adopter of that stuff they just legalized in Colorado and Washington state.

I was lucky enough to score a complete run of this strip on syndicate proofs, from which these images are made. I hope you enjoy the strip!

Comments:
Hey Allan-- I'm not a lawyer, but may I offer some judicious advice:
Never--ever follow a statement like...
I think Mr. Cole might just have been an early adopter of that stuff they just legalized in Colorado and Washington state.
with another statement that begins...
I was lucky enough to score a.... 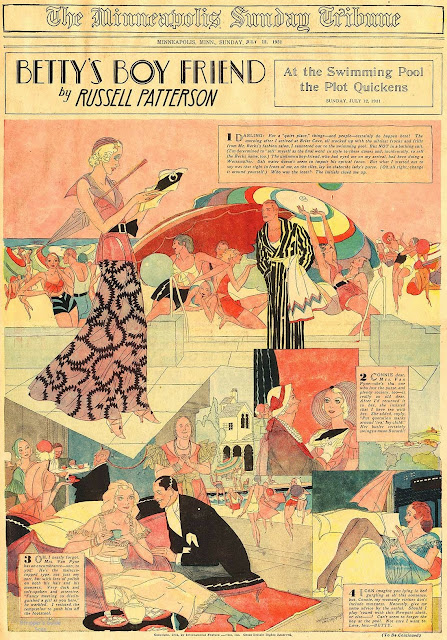 Here's another of those newspaper Sunday magazine cover series, this one going way out on a limb to be different. It's a romance, if you can believe it! I know, I know, how original. Anyway, the artwork by Russell Patterson on Betty's Boy Friend is a delight, even if you have to brush the cobwebs off the storyline.

Betty's Boy Friend was distributed by Hearst's International Feature Service imprint, and was a short-runner. It had just eight episodes, running July 5 to August 23 1931. 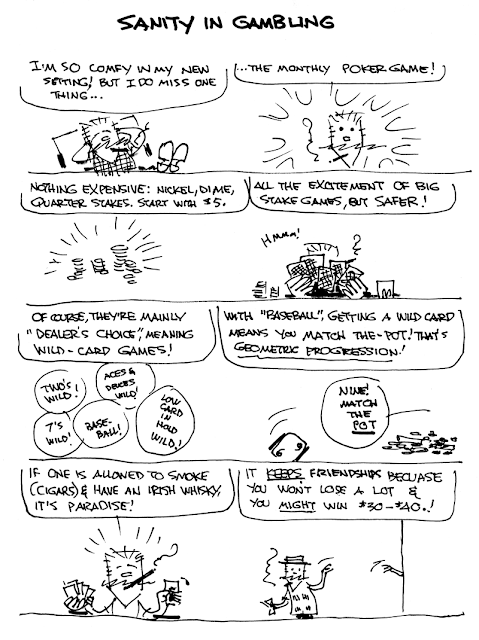 Comments:
Hey Jim - I look to more of your tales of gambling. Might I also suggest you tell about the time a cigar saved you from a carjacking!

On another note, I'd like to get some of the guys along with Doralya and I down to see you for a meal at a local place. Not sure of a date but it would be sometime between Dec. 21st and the new year. Would you be up for that?