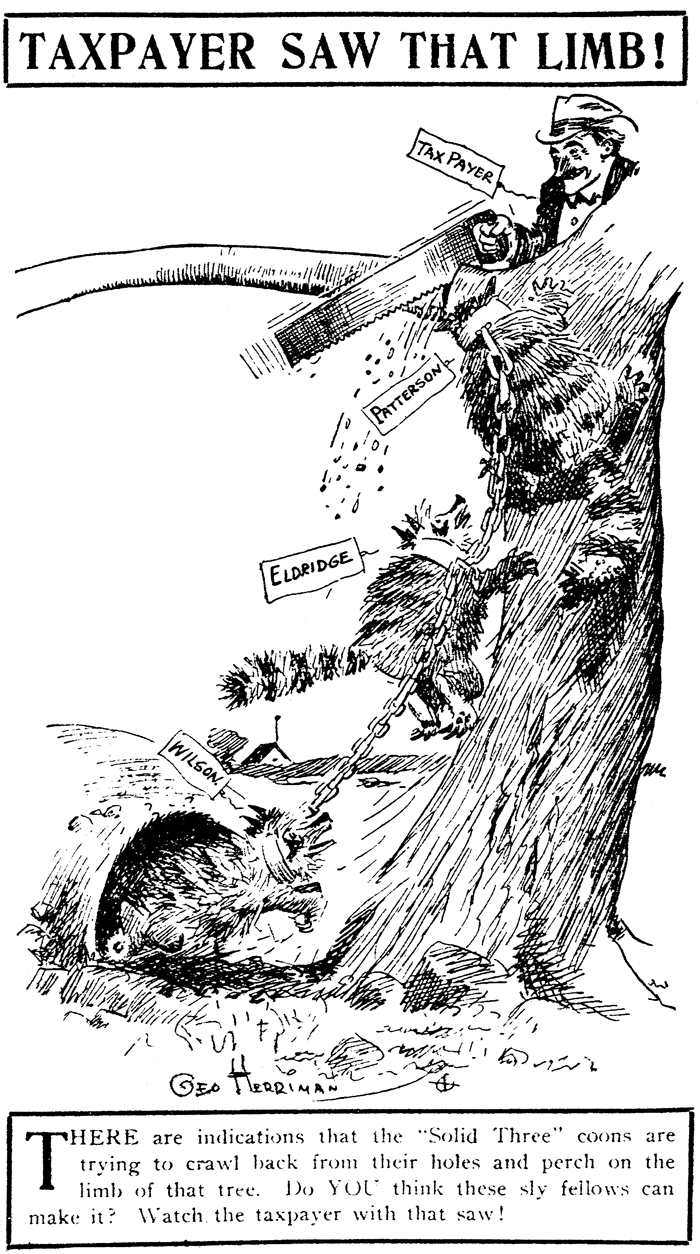 Tuesday, September 15 1908 -- Surprisingly, the "Solid Three", though caught red-handed in an obviously unethical sweetheart bond sale, are sticking to their guns. They claim that the sale is official and will not withdraw it. The newspaper and Herriman continue to rage against them. 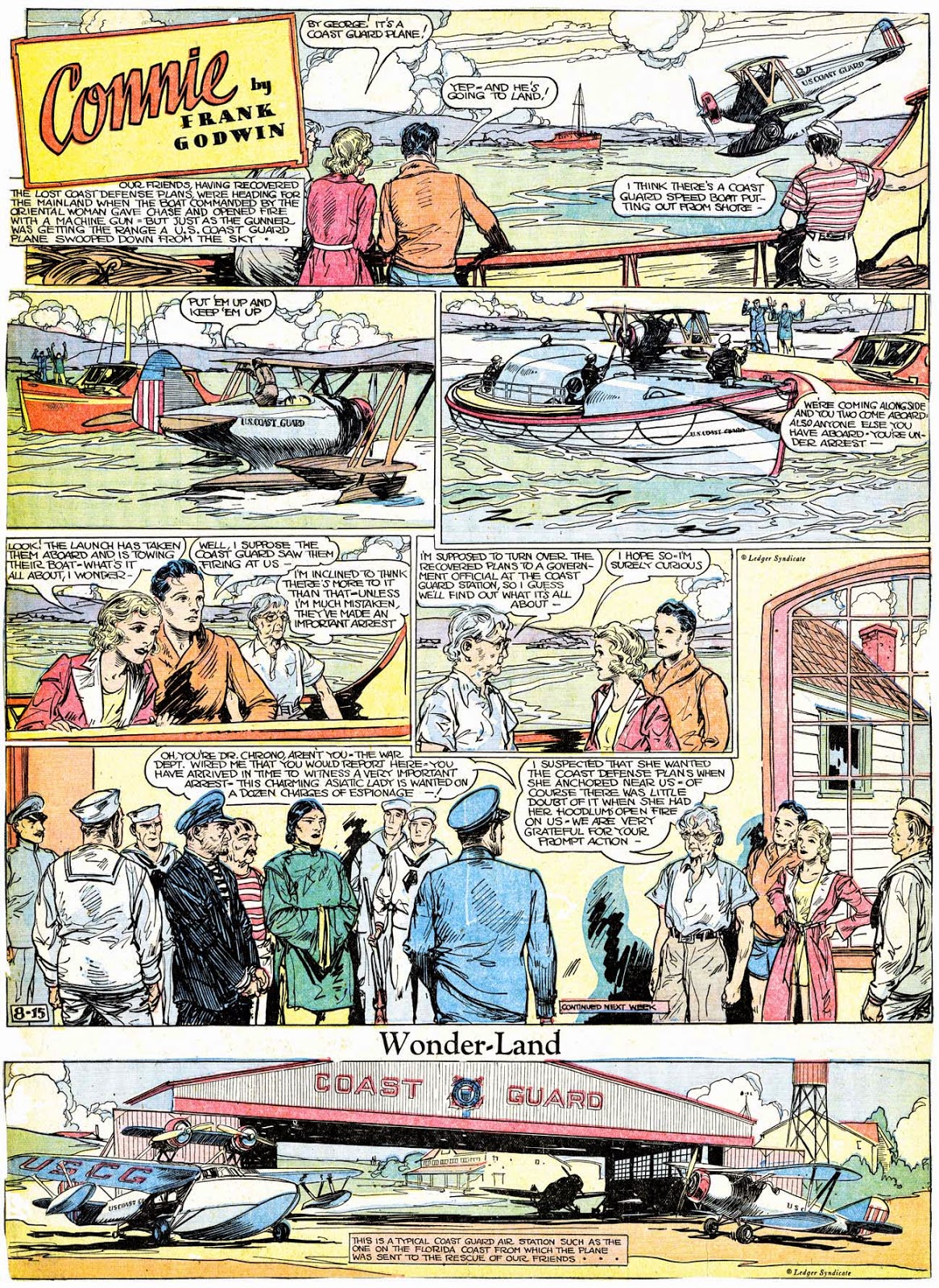 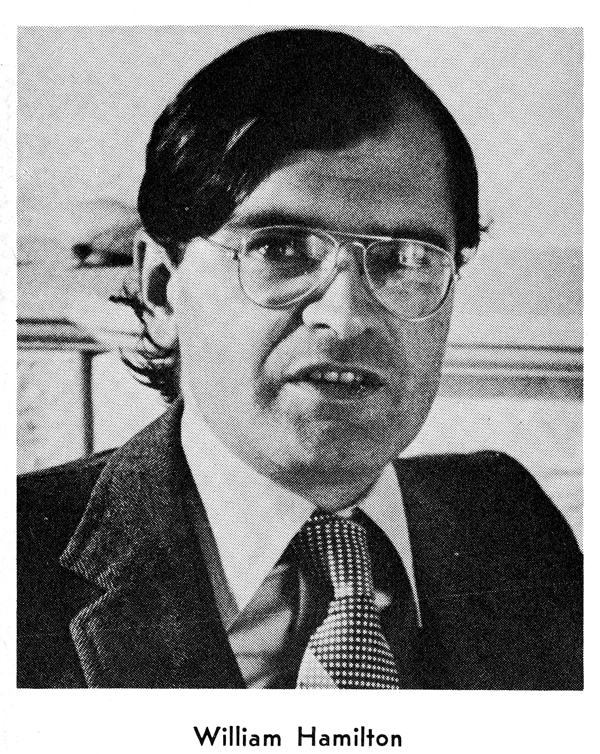 How and why did William Hamilton, whose magazine cartoons have been appearing regularly for almost a decade in that repository of clean, sophisticated wit, the New Yorker Magazine (and in others too) also become a syndicated newspaper cartoonist with an impressive list of major papers signed up in his first few weeks?

Asked that question, Hamilton can't suppress a gleam in his eyes. "I don't know if I should tell," he answers. The tall, rangy cartoonist who resembles a post-graduate about to end a teaching fellowship, leans forward and smiles. It all started, he explains, after he told a Washington Post writer doing a story on cartoonists that he, Hamilton, took his drawings rejected by various editors, thought up "something dirty" as captions and sent them off to Playboy—and Playboy bought them.

But after that remark appeared in print, no more "Wm. Hamilton" signatures in Playboy.
So, continues Hamilton, needing another cartoon market to take up the income slack, he tried a couple of New York syndicates which couldn't make up their minds. When Hamilton and his wife went back to his parent's home in the Napa Valley of California so that their first child would be born in that state, the cartoonist went to see Stanleigh Arnold, general manager of Chronicle Features and Sunday editor of the San Francisco Chronicle. Arnold had followed Hamilton cartoons for some time, but wondered whether they might be too sophisticated for general newspaper readership. Leaving some drawings on Arnold's desk, Hamilton went home.

By the time he got there—about an hour and a half—the phone was ringing and Arnold was saying yes. The cartoons lying on the editor's desk attracted several staffers who reacted with laughter. That was last August and after a couple of months working on the feature titled "The Now Society", it was introduced early in the year.

Drawing Since Childhood
Hamilton, born in Palo Alto, went to Phillips Academy in Andover, Massachusetts before entering Yale University in 1958 as an English major. His drawing dates back to childhood and didn't cease in college—although he was leaning toward being a movie director. Hamilton also had a year at the University of Veracruz in Mexico and then was drafted. He spent Army time in Port Richardson, Alaska— was there for the big earthquake, wrote press releases, shined shoes, cleaned bathrooms and washed a lot of dishes. He has told his wife, the former Candida Darci Vargas of Rio de Janeiro, that he has already washed a lifetime quota of dishes, and now it's up to her. 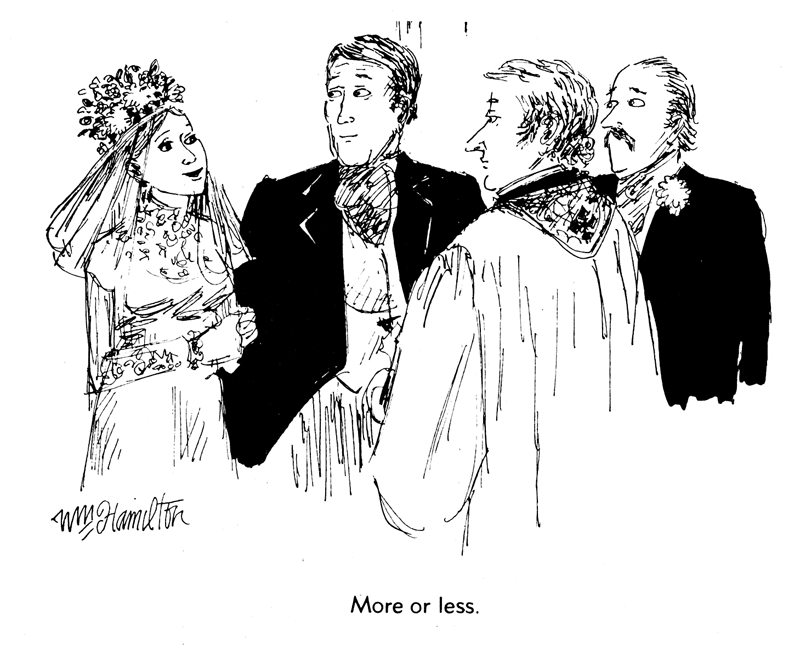 While in Alaska, Hamilton had begun submitting work to national magazines and once out of the Army came to New York where magazine credits soon began appearing. He met film director John Huston and went off to Rome as Huston's assistant in 1966 on the film "Reflections in a Golden Eye."
The cartoonist has written a couple of novels and a screenplay along the way and doesn't intend to give up writing. He finds fiction writing and cartooning compatible with "one a relief from the other." However, writing in his opinion is taxing —"more like work." It's not the fun that cartooning is, but he's determined to keep at it.

Drawing, he says, is genuine fun when going well. "You do not involve yourself as much when drawing. Some distance is required from drawing," meaning that any self-consciousness ' can interfere. "Cartoons demand relaxation and ease; you can't dredge them out or they won't come."

Well into the newspaper syndication routine, the artist has discovered he likes to work for newspapers. He explains that he can do what he wants and have the cartoons used, but with magazines, editors may not take the ones Wm. Hamilton likes best.

Another nice thing about drawing cartoons, "The Now Society" creator adds is that he can pretty much get up when he wants to and go to bed when he wants to, although granted a routine is settling over his schedule since arrival of his baby daughter. "She's gorgeous," father summarizes and writes out her name in full: Alexandra Manuela Vargas Hamilton. "The Now Society" is available five times a week in 2-column and one cartoon in a weekend panel in 3 or 4 column width. 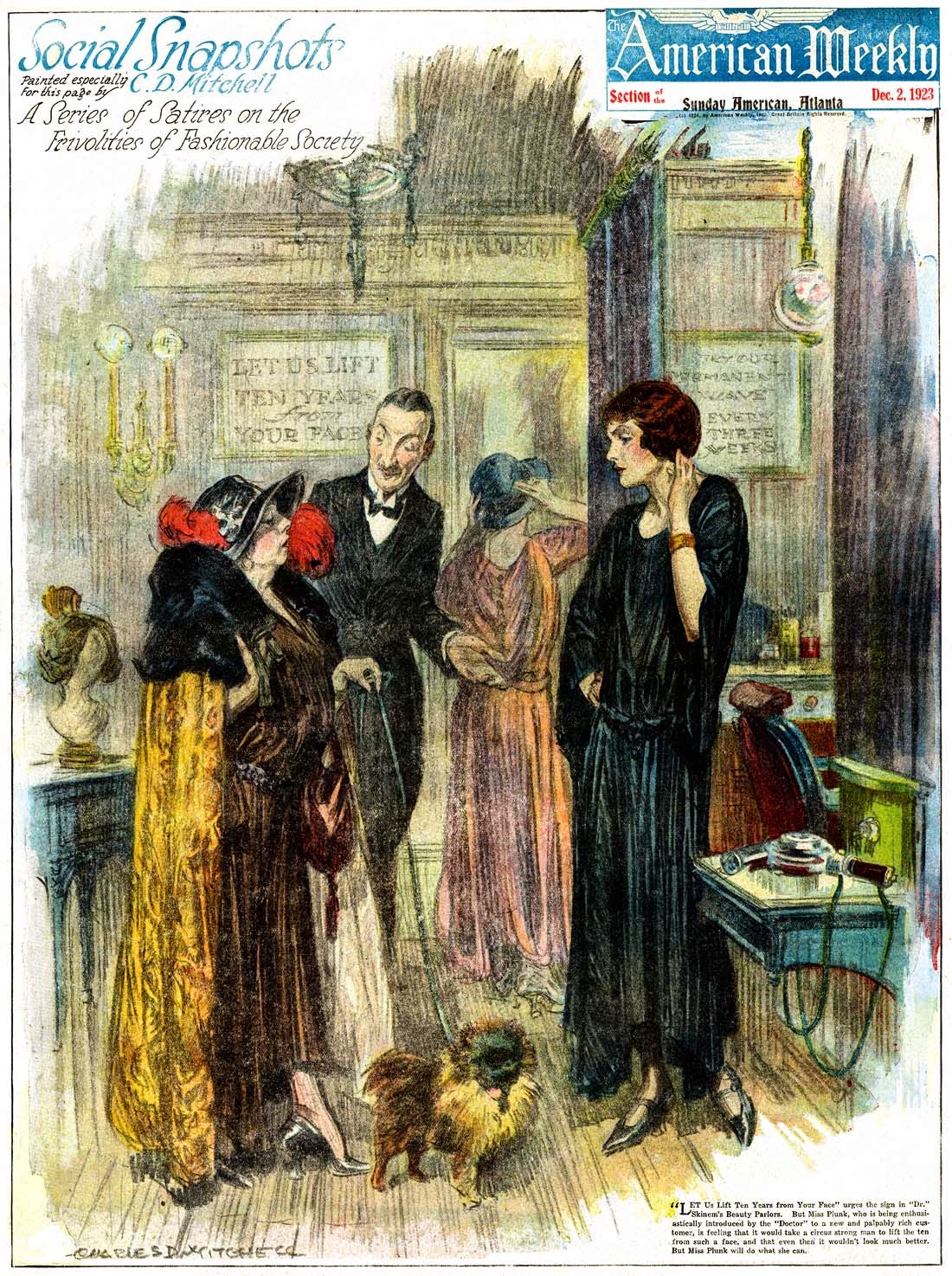 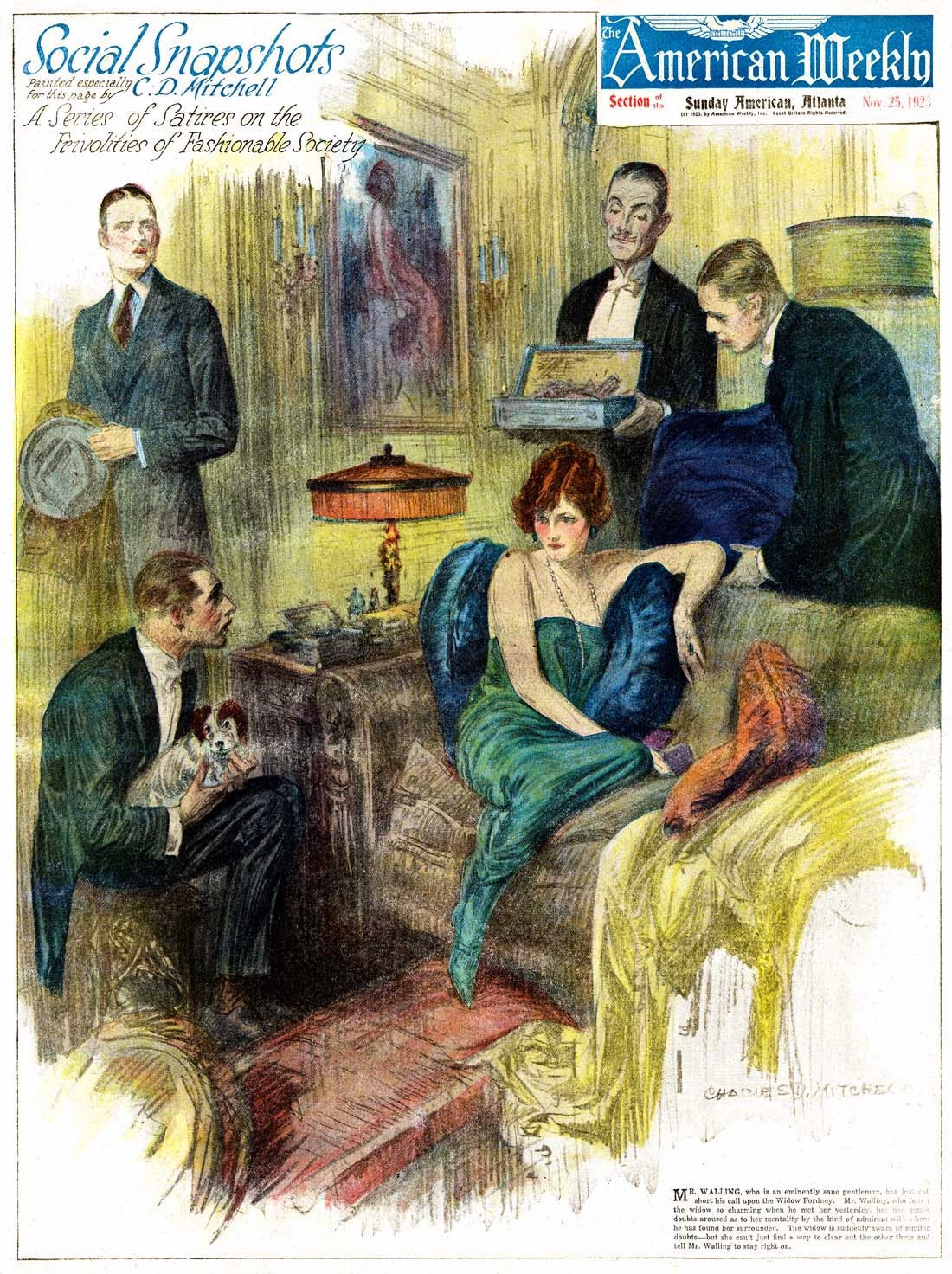 My attempts at restoration are only good enough to give you the barest suggestion of how attractive these C.D. Mitchell American Weekly covers are. They are examples from a series titled Social Snapshots, and Mitchell really hit the ball out of the park with these. Perhaps the artist was so thrilled to have a larger audience for a change -- the full line of Hearst-owned papers as versus the small client list of his Ledger Syndicate feature Follies of the Passing Show -- that he really wanted to wow 'em.

Social Snapshots started sometime on or before November 25 1923, and lasted until January 1924 (my last sample on hand is January 13). If anyone knows of an online newspaper archive that includes a long run of the American Weekly Sunday magazines, I'd appreciate you letting me know about it. I've been trying to put together a definitive list of American Weekly cover features for the past few years, and I've still got many, many holes in my index.

Comments:
have a look at this website if you have not already visited there. http://www.bpib.com/illustra2/various2.htm

Unfortunately, the images are too small for me to reliably determine the dates of the issues shown. But yes, that's a neat site!

News of Yore 1973: Checking in with Ziggy's Creator

Consistency is Key for New Cartoon Hero
Editor & Publisher, May 5 1973 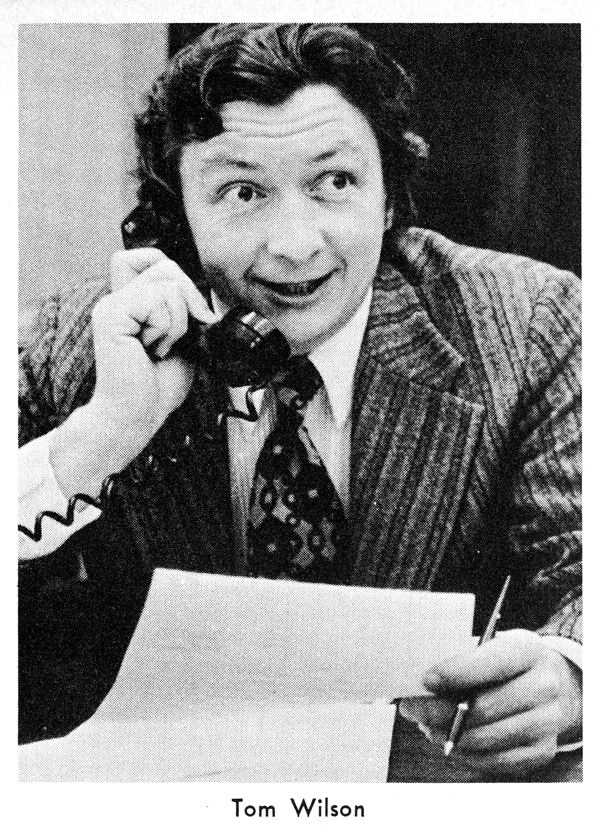 "Ziggy", the bungling brainchild of a corporation executive, is not quite two years old but is already a familiar hero of misadventures in cartoon panels in some 100 newspapers. "Ziggy" is distributed by Universal Press Syndicate.

The hero is a merry bungler created by Tom Wilson, a vice president in the creative area of American Greetings Cor­poration, Cleveland, who made his way up the corporate ladder by developing the Hi Brow and Soft Touch contemporary cards that were revolutionary in the greeting card industry.

Wilson insists that he is, in fact, Ziggy. "Ziggy stumbles through life with indomi­table spirit, hoping not to trip when a bright moment finally arrives. He runs along in the human race wearing galoshes. But don't we all?

"Ziggy is a lot of things we don't talk about," Wilson philosophizes. "There's a kind of loneliness about him none of us can ever really shake, even in a room full of friends."

The character is already a popular figure in a new line of American Greet­ings cards and in addition, appears in figurines, stationery, gift wrappings and wall posters.

Wilson thinks Ziggy's ego can handle his rapid rise to stardom. The key, he feels, is in keeping the character consis­tent. There are cartoon ideas Wilson won't use, because they're not something Ziggy would say or do.

"Like an actor, a cartoonist has to be­come the character," Wilson says. "It has to be a convincing role. It's kind of freaky, but after awhile, the character becomes a sort of personality in himself. He's someone you know. And really, Ziggy is the source of his own cartoon materi­al." 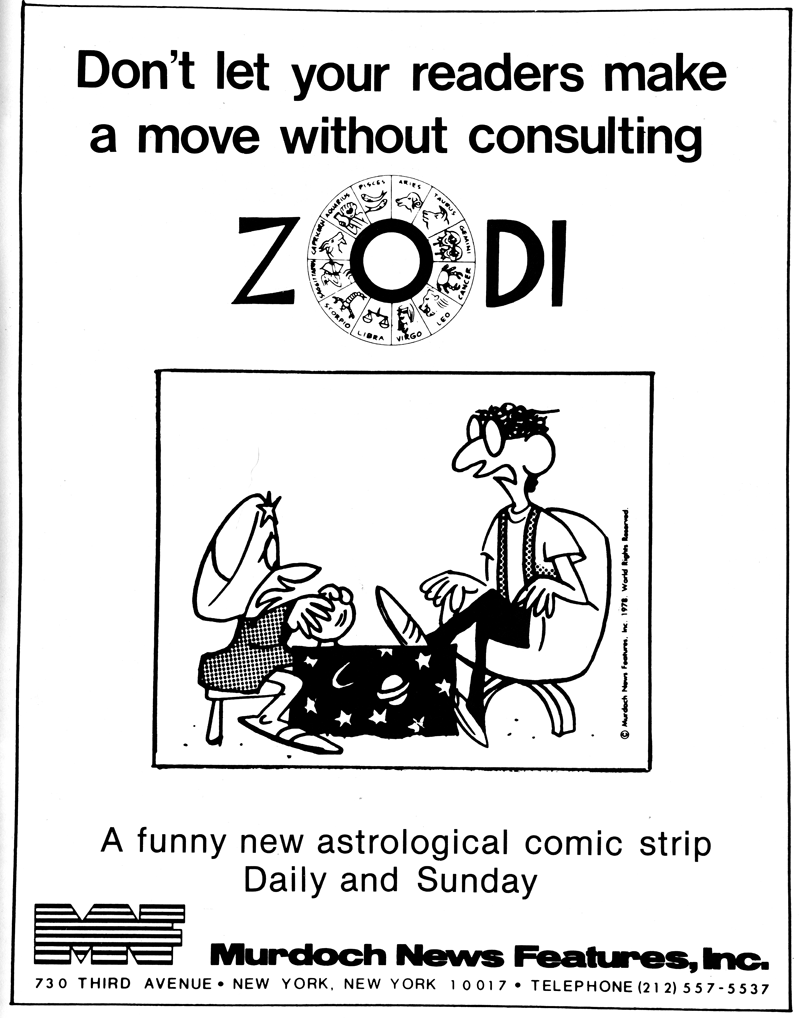 Some mystery strips don't even make it into Editor & Publisher. Here's an ad that appeared in Cartoonist PROfiles #41, March 1979, for a new strip titled Zodi. It was distributed by that Murdoch fella from down under, in one of his earlier attempts to bring his ever-so-special brand of journalism to the States. Murdoch News Features was incorporated in 1978, and seems to have fizzled out by the end of 1979. Has anyone seen Zodi appearing in a newspaper? If so, please let me know! 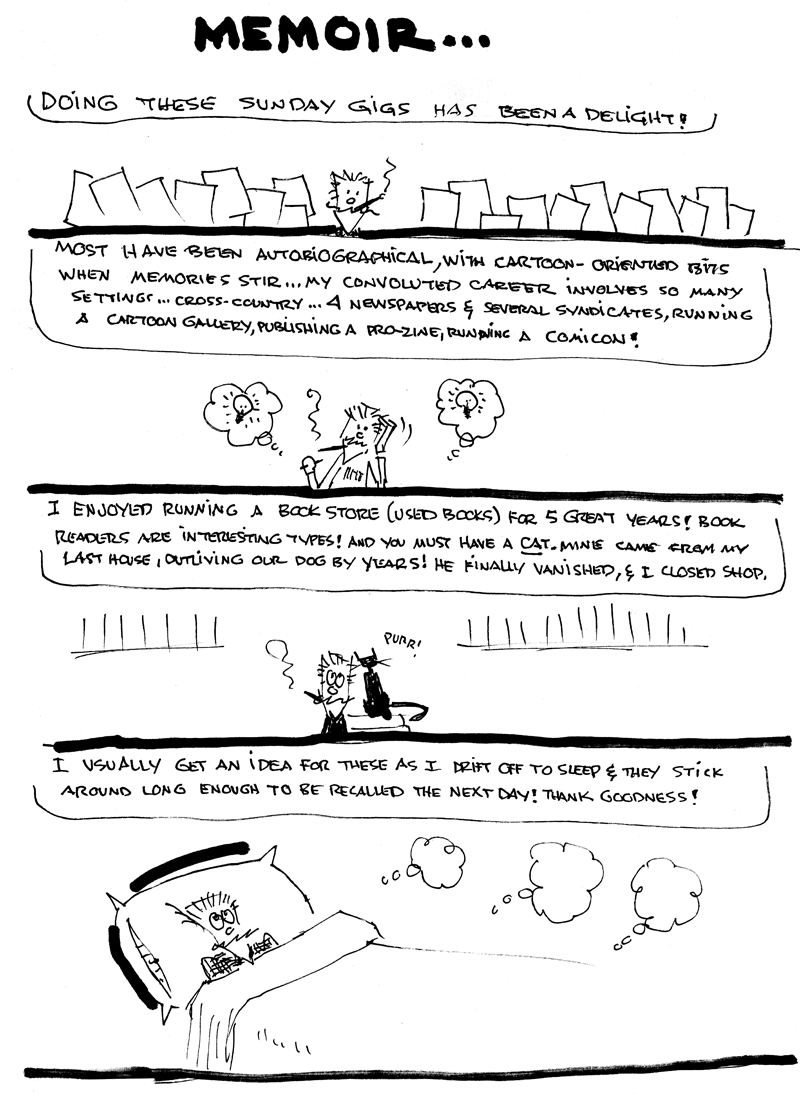